Before we go to on-premise, let us recap the facts for Cloud:

In an on-premise system, you have the freedom to choose one of the following options:

Note that the ABAP language version can only be set and changed individually for ABAP source code objects like classes, interfaces and function groups.

The boundary conditions of this setting are:

If you want use the strategy to check the compliance of an ABAP language version with the ABAP Test Cockpit (option 2), you can do this for example using the Eclipse-based version of the ABAP test cockpit. In the Project Explorer, select an object or a package, open the context menu and choose Run As -> ABAP Test Cockpit With …. In the subsequent dialog, enter “SAP_CP_READINESS_REMOTE”.

The following picture shows the results of the ATC check:

If you want to check your code for ABAP language version ABAP for Key Users, you need to create your own check variant.

Before closing, I would like to point out in which cases the use of restricted ABAP can be helpful in on-premise systems:

One question, Under custom logic  InApp BADI , ABAP for Key users is enforced. But we can change the supported language version to achieve more functionalities in on-premise. But is it recommended? will it have any impact during upgrade?

I would not recommend this. If you are using the Web-based ABAP editor under Custom Fields and Logic, you should not change the language version. But what you can do:

I call option 2 a "breakout" scenario. Option 2 has the advantage, that you use the language version ABAP for Key Users (which means that you enforce use of released APIs in general), but you have some "breakouts" where you still use non-released APIs. Over time, you could try to reduce the breakouts once a suitable SAP API is released.

Very helpful blog, please can you explain how I release a class that is written using "Standard ABAP  Unicode)" for use in another class that is using ABAP language version "ABAP for Key Users".

At the moment I just get a syntax error when I try to use the standard class for the key user class.

Vijay, who asked the initial question above, helpfully wrote a blog that explains how to release a custom class for Key-User extensibility:

Note that you do this through the ABAP Development Tools (ADT) in Eclipse, not in SE80.

However I'm not sure you need to do this. Let me reply on Vijay's question...

In ADT go to the "Properies", "API State" tab. IN this tab, you can create a new release contract. See the documentation here: Setting the API Release State - SAP Help Portal

But what perhaps hasn't been made clear, is that on-prem customers don't have to use the Key User tools to implement the new cloud BAdIs.

You can just implement them using SE19, or using ADT. If you use ADT, then the implementation class is created with version Standard ABAP by default. In SE19 it creates it with the Key User version, but you can change it.

Correct me if I'm wrong!

Correct. If you use the key user tool, the ABAP language version "ABAP for key users" is enforced and must not be changed manually. If you use SE19 or ADT, Standard ABAP is the default.

Just when I thought I understood it, I've found a further complexity.

In transaction SCFD_REGISTRY, BAdIs are marked as available On Premise, in Cloud or both.

Some of the BAdIs in it, like SD_SLS_COPY_RQMT_HEAD_SLS, are marked as available in Cloud only.

However in the same system (op 2020 release) I was able to find this BAdI in ADT and create an implementation for it without any issues.

So is this field just for information, and has perhaps just got out of date in this example?

Or would the 'Cloud only' setting somehow prevent the BAdI implementation from running in my on- premise system?

I think I can now partly answer my own question.

So in my on-prem system there's no option to implement SD_SLS_COPY_RQMT_HEAD_SLS through the app, but nothing stopping me from implementing it through ADT or SE19.

My doubt then, is can we safely ignore this flag or not, if the BAdI exists on prem, but the 'availability' is cloud-only?

Is it just that the BAdI previously did only exist in the cloud, and someone forgot to update the flag when it was added to on-prem?

you are right, SCFD_REGISTRY controls the content available in the Key User app Custom Fields and Logic.

I cannot tell why application development set the Cloud-only flag. In some cases, business processes run slightly different in Cloud and on on-premise (the on-premise scope is normally broader than the Cloud scope), or the new BAdI is only called in a Fiori app that is not released in on-premise.

So technically nobody is stopping you from implementing the BAdI with ADT or SE19 but if application development sets the cloud-only flag, I would recommend to use the respective "old" extension technique.

Thomas Schneider, thanks for the helpful Blog!

One question: From which NetWeaver version on can the ABAP Language option be set on individual objects and on packages?

On our 7.50 System this is greyed out in ADT, only on our S/4HANA System I can change this.

The full functionality that I described in this blog is available as of S/4HANA 2019. The language version ABAP for key users was introduced earlier, but definitely not with NetWeaver 7.50.

I have 2 questions to ask

1) In on-premise, it works the same way as in the Cloud, given that you are on the latest version. You can get the tree via the function New -> Repository tree in the Eclipse-based ABAP development tools.

2) There are 2 versions of Restricted ABAP:

Thomas Schneider May be I did not understand you correctly. We are on S4HANA 1909 and when I login via ADT I see no options in the project explorer to see the list of Released Objects. In the below image, the system 1 is an S4HANA onPrem system 1909 and system 2 is a ABAP Cloud Trial. 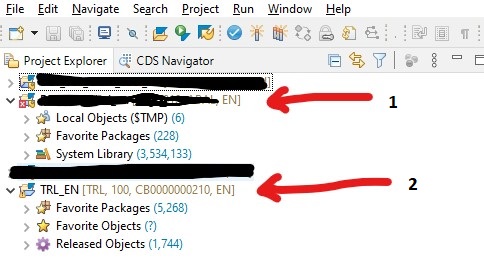 Can you please try on your on-premise system: 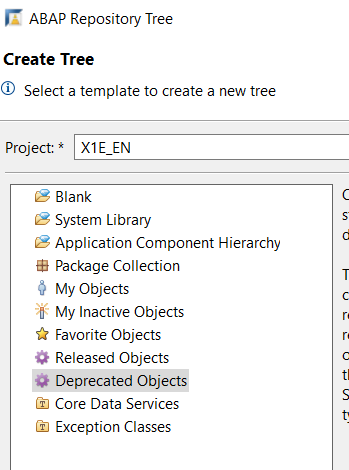 @Thomas Schneider Thanks a lot for the quick response. I assume, I cant take this as a complete list of released objects. As there is not much for Classes and function modules in the list. If we plan to enforce developers to follow restricted ABAP on a OnPrem system, they wont be able to do much. I tried to use a basic BAPI call in  the onPrem System and it showed my syntax errors. 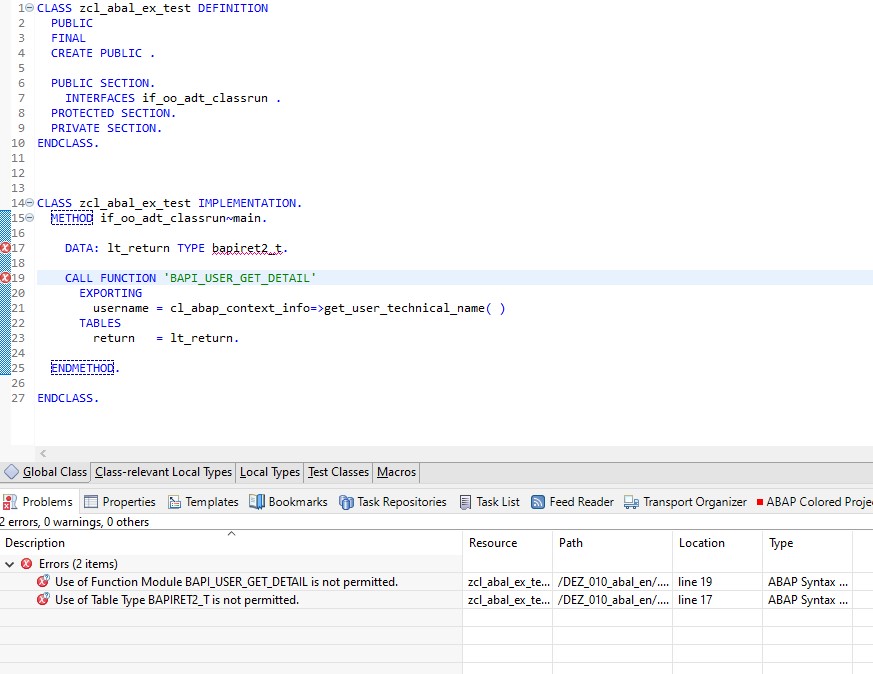 Same Error is displayed when i run the ATC variant “SAP_CP_READINESS”

I agree that the list of released object is still small in SAP S/4HANA 2019. The plan to enforce developers to follow restricted ABAP on a OnPrem system is challenging, and for the time being I would recommend to go for a hybrid approach:

Does this make sense for you?

thanks for this and your other great blogs around this topic.

It seems to me, neither of the restricted ABAP options are a great fit for extensions on-prem?

I was looking at ABAP for Cloud, and I see only 44 CDS views are released for customer use. This makes sense for Cloud where the S/4HANA data model doesn't exist, so only views relating to generic concepts like country and currency are available. I see SAP_CP_READINESS_REMOTE also would limit CDS view access to this selection.

But when developing on-prem, clearly we may wish to access business data directly through a SELECT rather than through an unnecessary oData call. For Key User ABAP, it looks like 4260 CDS views are released, which fits with this idea.

However as you explained in your recent blog, Key User ABAP is more restrictive than ABAP for Cloud regarding syntax, as it was really only intended for writing code snippets.

It seems to me like the least bad option may be to choose standard ABAP, and to build a custom ATC check based on SAP_CP_READINESS_REMOTE, but with the full list of 4260 CDS views pasted in.

Or maybe a more suitable ABAP version will come with the planned developer (on-stack) extensibility?

Would be keen to get your thoughts - am I missing something?

For the time being, the situation when working with the language version ABAP for Cloud Development is as follows:

Thanks Thomas. Will be interesting to see how it moves forwards in the 2021 release.

Thanks for the helpful blog. I tried to use one of my local CDS view as a table type in the method, (lt_local type table of 'cds_name')

but that is not working, showing the following error:

Use of CDS Entity 'Entity_name' is not permitted.

Also, there are a lot of errors while using data elements (and hence I have to use data type instead of data element).

Use of data element 'dataelement_name' is not permitted.