In this first Cloud-Native Lab post, I’ll show you seven different ways to define environment variables in the Cloud Foundry environment. Followed by this, I’ll compare these approaches so you can find the one that suits your needs the most. In the end, I’ll write a web app, using the UI5 web components, that lists all variables in a Fiori-style.

This post covers the role of environment variables in a cloud-native world and primarily how they are used in the SAP Cloud Platform. As environment variables are such a well-known concept, there are many ways to define them. I will explain the various techniques I personally use and compare them to each other to identify which options are suited for which use-cases. The veterans of operating systems

I assume there is no need to explain environment variables in-depth as most of you had to deal with them in one form or another already. So I’ll just leave you with the first sentence from the Wikipedia article here:

An environment variable is a dynamic-named value that can affect the way running processes will behave on a computer. They are part of the environment in which a process runs.

I think this description fits it pretty well. I’m sure every developer already worked with the infamous path variable. The concept of environment variables has been introduced to the Unix-World in 1979 and shortly after also to the Windows-World. And while the idea is quite old, it is far from retirement. I would actually say that environment variables are going through their second adolescence.

I often hear that people refer to cloud-native platforms like Cloud Foundry and Kubernetes as cloud-native OS – and there is something to this. These new platforms rely on environment variables the same as traditional OS did. In the cloud-native-area where everything is containerized, environment variables are frequently used to inject configuration into the containers. They could declare connected services or contain information about the role or task of the container in a larger cluster. An example of the first one could that software modules check the environment variables for service credentials by default when the developer didn’t enter them explicitly – as the GCP BigQuery client does. An example of the latter one is how CI/CD tools like CircleCI use them to pass the information on how many containers run in parallel. This lets each container know how many helpers there are to divide the workload among them.

One single (base-)container is often for many scenarios, which reduce the overhead of managing various containers with different configurations. It’s fair to say that environment variables empower containers to be more reusable and therefore enable the entire cloud-native-mindset.

Another example of a package that relies on environment variables is xsenv. This utility package helps to load and read application configurations for bound services in the SAP Cloud Platform Cloud Foundry environment, SAP XS advanced model, and Kubernetes (K8S). On npmjs.org, you can see that almost all other npm packages by SAP depend on this single module. Therefore, it’s no surprise that xsenv is the most popular npm package by SAP. xsenv combined the purpose of tools like dotenv and cfenv in one single tool that is already part of most node-based SAP projects. So there is no need to use additional packages, which would increase the size of your node_modules folder.

In this section, I want to explain a few ways how you can define environment variables. I’m sure this list is far from complete, but I think I mentioned the most common and most useful ones. In case I missed an approach, please let me know in the comments.

Using the native OS command is probably the most common approach:

Depending on your OS and the used shell, these commands may vary. In general, the variables that are defined like this are scoped for all processes started from the current shell. This approach can be combined with a shell profile to make the variables available permanently. Environment variables that are defined like this are only available on the local machine where they have been declared and are not persisted with git.

You can also define environment variables only for a given process. For this, you need to prefix the command with the declaration.

Afaik, this only works in Unix environments. The variables are only available on the machine during the execution of the command. It is not possible to store the values with a version control system like git.

The previous categories were OS-specific but independent of the used runtime platform. This category only applies to Node.js, but I’m sure there are similar ways to achieve the same result with Java or Python.

Both packages allow the usage of Unicode characters for the variables and are written to text files. This has the advantage that these environment variables can be stored in a version control system, and therefore, the variables can easily be shared among team members/a community. As a result, the variables are also available once the project has been deployed to another (cloud-based) environment.

The previous approaches always applied to the environment variables of the local machine of the developer. In this category, I will show you ways to define an environment variable that is ONLY available in the cloud environment. These instructions work on Cloud Foundry-based platforms only, but there are similar concepts for other runtime environments too.

This table might suggest that tools like xsenv are the best way to load environment variables, but this doesn’t mean they are suited for all use-cases. It could make sense to use another approach if certain environment variables should only be available in one runtime. Similarly, you might want to prevent that certain variables like credentials are saved in git and should not be shared among developers.

So you might also end up mixing different approaches in your projects.

Caution: Variables with the same name will override each other if multiple approaches are used in parallel. It is not possible to “merge” two values of the same variable.

To keep the hands-on simple, we’re just going to define environment variables that don’t do anything – they are just there. To visualize them, will build a simple server that exposes all defined variables in a list. As plain HTML5 lists (<ul>) are dull and ugly, we’ll use UI5 web components to style the items familiarly.

Before we get to the fun part, we need to install some tools which are mandatory for cloud development on SAP Cloud Platform (if you haven’t done so already):

Express is used for the server, and the other dependencies, xsenv & cross-var, are used to define different environment variables. The other devDependecies are needed for the UI5 web components.

Create a file with the name index.js and the following content.

This server will load and expose the variables and serve static content from the dist directory. Don’t worry if you don’t have such a directory yet, it will be created automatically during the build step of the web app.

Create a default-env.json file to define the variables that are loaded in line 4 of the server.

Create an index.html page that contains the following markup. Can you spot the UI5 web components here?

This is almost all you need to do to create a simple website that leverages the UI5 web components. The only missing part is the necessary imports and the logic to render the list items manually. Create the srv/index.js file to take care of that.

Use npm (or alternatively yarn) to install the dependencies, build the static resources, and eventually start the application.

Open http://localhost:8080/ to see the frontend in action. It should look similar to this. 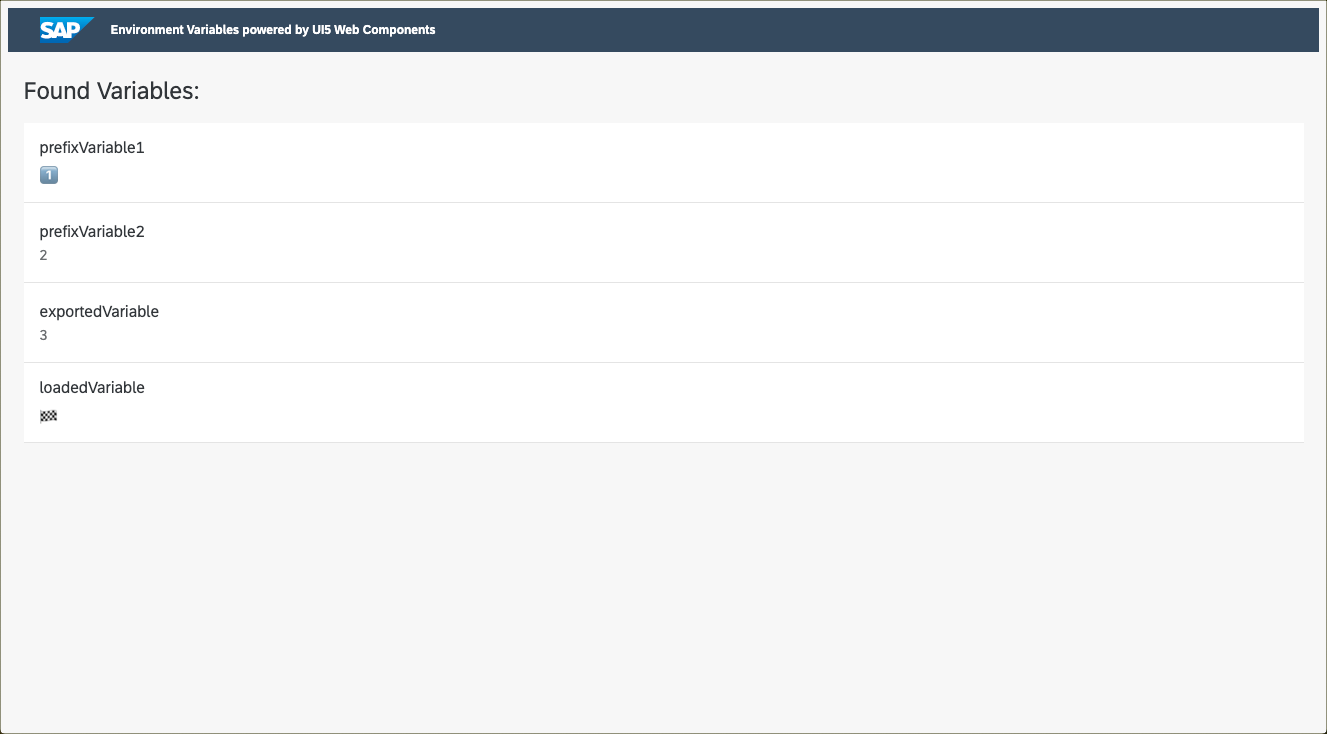 Available environment variables in a local setup on a Unix system

Create the mta.yaml descriptor to define all parameters that are needed for the next step. This includes the runtime configuration of the platform as well as the build parameters to make sure the project is built before it’s packaged.

Run the following commands from the project root to deploy the app.

Once the deployment has finished, you will find the URL of the app in the console output. Open the web app; you should see this result now.

You made it! You can see that you see different variables here. The “local variables” are gone, but you see additional “cloud variables” now,

In this edition, you have learned:

About this new series

I prepared a short FAQ for you as you might have some questions about my new (and the old) post series.

Q: Why does CloudFoundryFun end and Cloud-native Lab start?

A: Lately, I often wanted to write about topics that would fulfill the core “Fun” idea of CFF, but it was not directly related to the Cloud Foundry environment, which is why I discarded the topics. With this new chapter, I can include all topics that are of interest.

Q: Does this mean that CF will be deprecated?

A: Absolutely not. CF is still the central platform for the extension and integration scenario of the SAP Cloud Platform.

Q: Does this mean CFF/CNL won’t be about Cloud Foundry in the future?

A: Also, a definite “No” to this one. As you can see, this post is also about Cloud Foundry. It’s just a name change for a new chapter. This will give me the chance to write about other cloud-native technologies from SAP, such as Gardener or Kyma, every now and then. 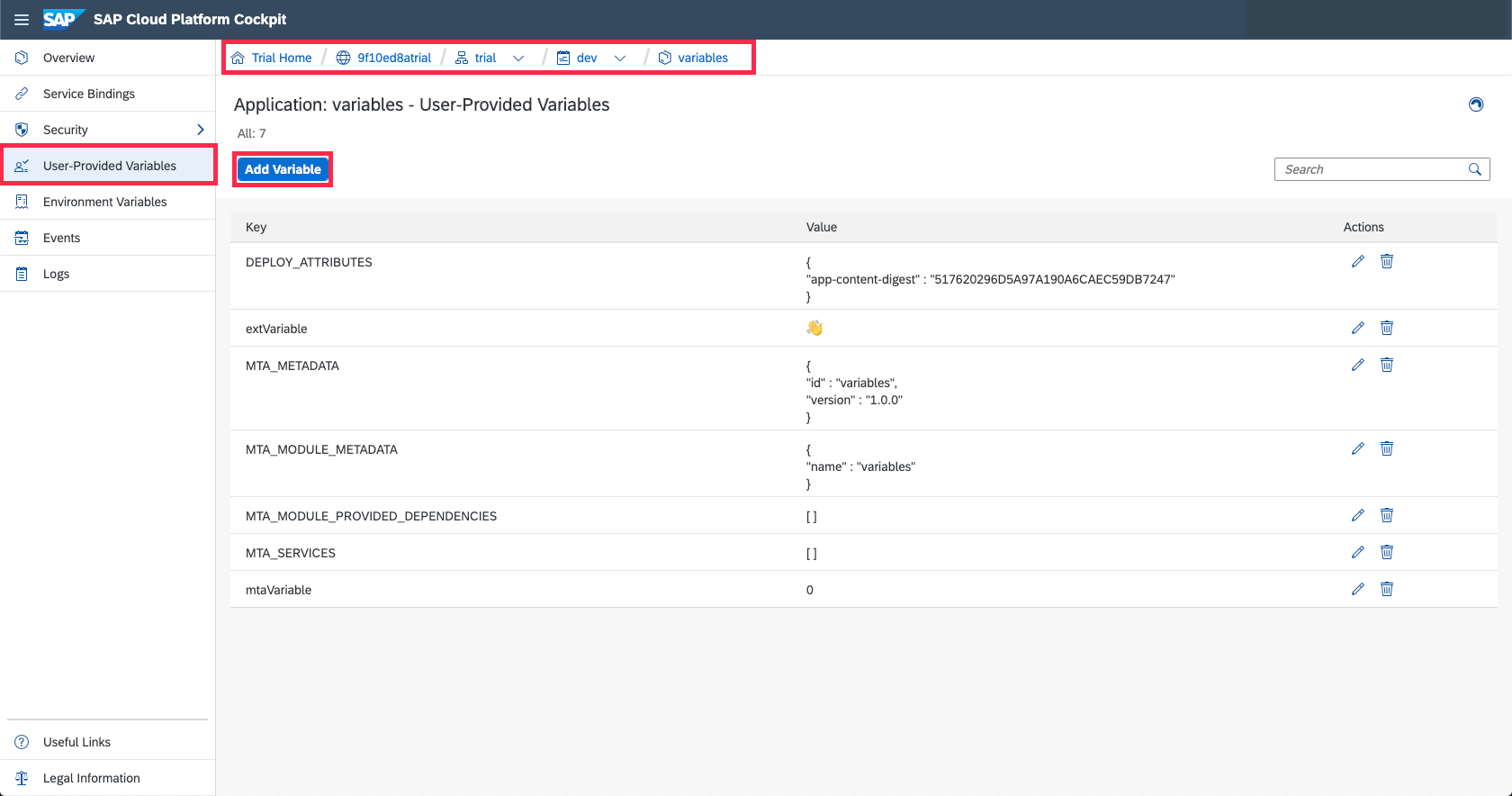