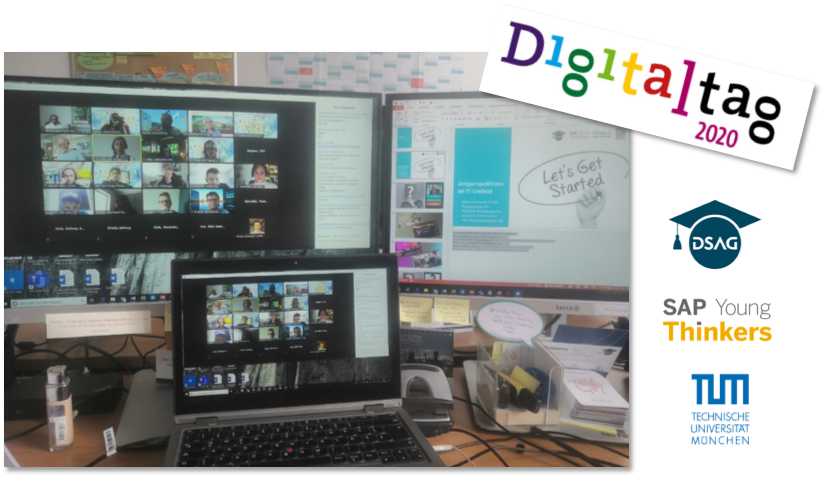 Digitisation has a far-reaching impact on our everyday and professional lives and is changing both profoundly. How digital change can be shaped together and what challenges, but also opportunities, digital transformation brings with it was discussed in 3,527 hours and 1,435 actions on Digital Day 2020. With the aim of making digitisation tangible and understandable and bringing people together around digital topics, various aspects of digitisation were highlighted.

The Academy of the German-Speaking SAP User Group e. V. (DSAG) also contributed to the Digital Day, together with SAP Young Thinkers and with the support of the SAP University Competence Center Munich and the Technical University of Munich (TUM), an important aspect of digitalization was made playfully tangible: the handling of modern business software. In order to prepare young team members, career changers and representatives of the departments for their tasks in the SAP S/4HANA introduction and to give students an insight into modern business software, an ERP business game in SAP S/4HANA was planned.

Be a boss for one day with SAP S/4HANA

On the afternoon of June 19, 40 participants, 8 speakers, one trainer, one host and three helpers met in the virtual back office. Everyone was eager to spend the afternoon together and to play the ERP business game, learn about SAP S/4HANA and get to know different job profiles in the IT environment.

Bit by bit, the students, trainees and company representatives logged in to the zoom session. In the virtual get-together the participants had time to get to know each other and also the Zoom platform. After a short introduction to the daily routine, Robert Heininger from TUM introduced the ERP business game. The teams then competed against each other in interdisciplinary teams of students, trainees and company representatives in the simulated market environment of the business game. In the process, they not only learned about the SAP Fiori apps, how to use the SAP software and some of the basic functions of SAP S/4HANA, but also how important open communication and cooperation as well as effective team coordination are for successful business.

During the day, however, the focus was not only on knowledge transfer. It was also about networking company representatives, trainees and students in interactive collaboration in the business game, so that they could learn from and with each other. And what did the participants take away with them? Here are some of the participants’ voices:

But the ERP business game was not everything. In addition, a direct link to the practice was established. Various company representatives gave short presentations on what it means to be an IT manager, software developer or SAP consultant, and what tasks are involved. Here a thank you to Helmut Schelling of Vector Informatik GmbH, Kristian Kessler of ThyssenKrupp, Ralf Peters of Agrana Beteiligungs-AG, Guido Baptist of Storck and Stephan Lange of 1&1 for accepting the challenge of describing their different roles in the SAP environment and the associated competencies in short and crisp five-minute presentations. Chapeau!

Thomas Reichmann and Daniel Klein from Schukat Electronic Vertriebs GmbH and Constanze Stedele from SAP vocational training concluded the web session. Their presentations on the topics “The 3×3 of the move: 3 essential things to know before switching to SAP S/4HANA and 3 key learnings of an implementation process” and “Training opportunities and job perspectives at SAP” rounded off the day.

The feedback of the participants showed – the joint action was a success and calls for repetition!