How to integrate SAP CBTA with Selenium IDE

Selenium is easily one of the most popular open-source test automation frameworks available, with over 18K stars on GitHub and thousands of users and developers around the world. You are likely to see it running in businesses of all sizes, including large SAP customers. On the other end, while by no mean as popular as Selenium, SAP CBTA is a SAP automation testing proprietary tool that comes with a major limitation: only SAP technologies are officially supported (see SAP Note 2436142 for more information).

Can you seamlessly integrate SAP CBTA and Selenium to automate a given business process? Unlike HP, Tricentis or Worksoft, there is no native integration available to you. However, since CBTA is built with Visual Basic Script (VBS) and gives you the option to build your own functions, you can still give it a shot.

None of this is supported by SAP. Always build a prototype before trying anything in Production, and make sure to have the right experts (internal or external resources) on your team!

Selenium being a framework, you have multiple ways to use it. Because it is visually more appealing and low-code, I will be using Selenium IDE (a record & playback browser extension with an integrated development environment) and Selenium Command-line Runner (command-line execution for Selenium .side scripts).

Our objective: Execute a single CBTA script in which Selenium will take over the execution for 2 steps. The script will be running against SAP CRM (here, SAP Solution Manager) and Google Chrome. We also want Selenium to run unnoticed and reuse the browser window that was first triggered by SAP CBTA.

Second, install Selenium IDE for Chrome and create a new project. Set the playback URL (e.g. CRM home page) and start recording the exact same steps as for CBTA. Remove all but the two last steps (3 and 4 from the previous list). Obviously, this is just an example but it illustrates one of 3 common reasons why you would need Selenium:

It is important to note that your script needs to start with the “open” command, otherwise Selenium will not launch at all. Do not worry, this does not mean a new browser window will open instead of reusing the existing one. Save your Selenium project (.side format). 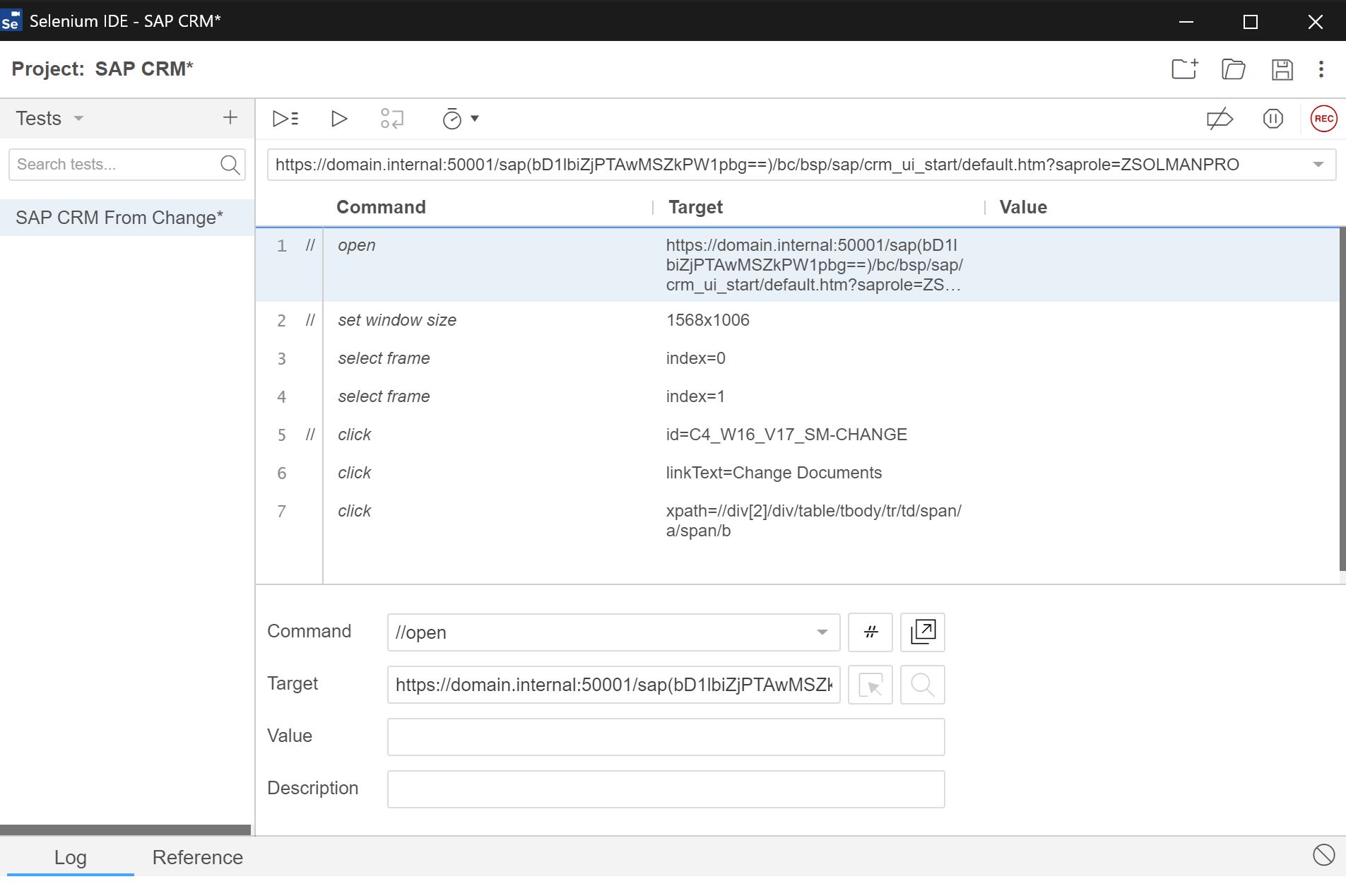 Third, make sure the Runtime Library Manager (RTL) on your SAP Solution Manager system is working. You can follow SAP Note 1912801 for customizing. If your server is running on HTTP protocol (meh), then do not select the SSL option in the webservice configuration. The RTL allows you to create VBS scripts that can be invoked by CBTA during execution – think of it as building Z* code for custom requirements. Navigate to the “Test Suite – Administration” tile and click the “Customize RTL” link to launch the RTL.

Again the CBTA documentation does a fantastic job at explaining how things work. You can refer to the “CBTA 3.0 – Runtime Library Manager” PDF to learn how to set a local storage path for your functions and synchronize them with SAP CBTA. Create a new .vbs file from scratch in your favorite IDE (e.g. Atom) or from a standard template.

Outside of the required template sections (see documentation), my core function has 2 main features:

You will notice the function returns “DONE” after the command is executed. However, since there is no logic to determine whether the Selenium execution has been successful, it will always return “DONE” as the output parameter. Make sure to implement your own logic (e.g. checking the Selenium execution log for PASS or FAIL result).

Now, back to the Test Composition Environment, disable the steps you wish to automate with Selenium (in my case, the last two) and add a new CBTA Default Component of type “CBTA_*_A_INVOKE_FUNCTION” or “CBTA_*_A_EXECUTESTATEMENT”. Both components call a custom script as part of the test execution but there are a few key differences as to when you should use one or the other. Please refer to the CBTA Frontend documentation.

Remember my Selenium_CBTA_Impl( Input1, Input2, Input3, Input4, Options )? With the “INVOKE_FUNCTION” component, each of those inputs is automatically mapped to PARAMETER1, etc. In my case, I do not need any but you can obviously use those parameters to pass data to Selenium. 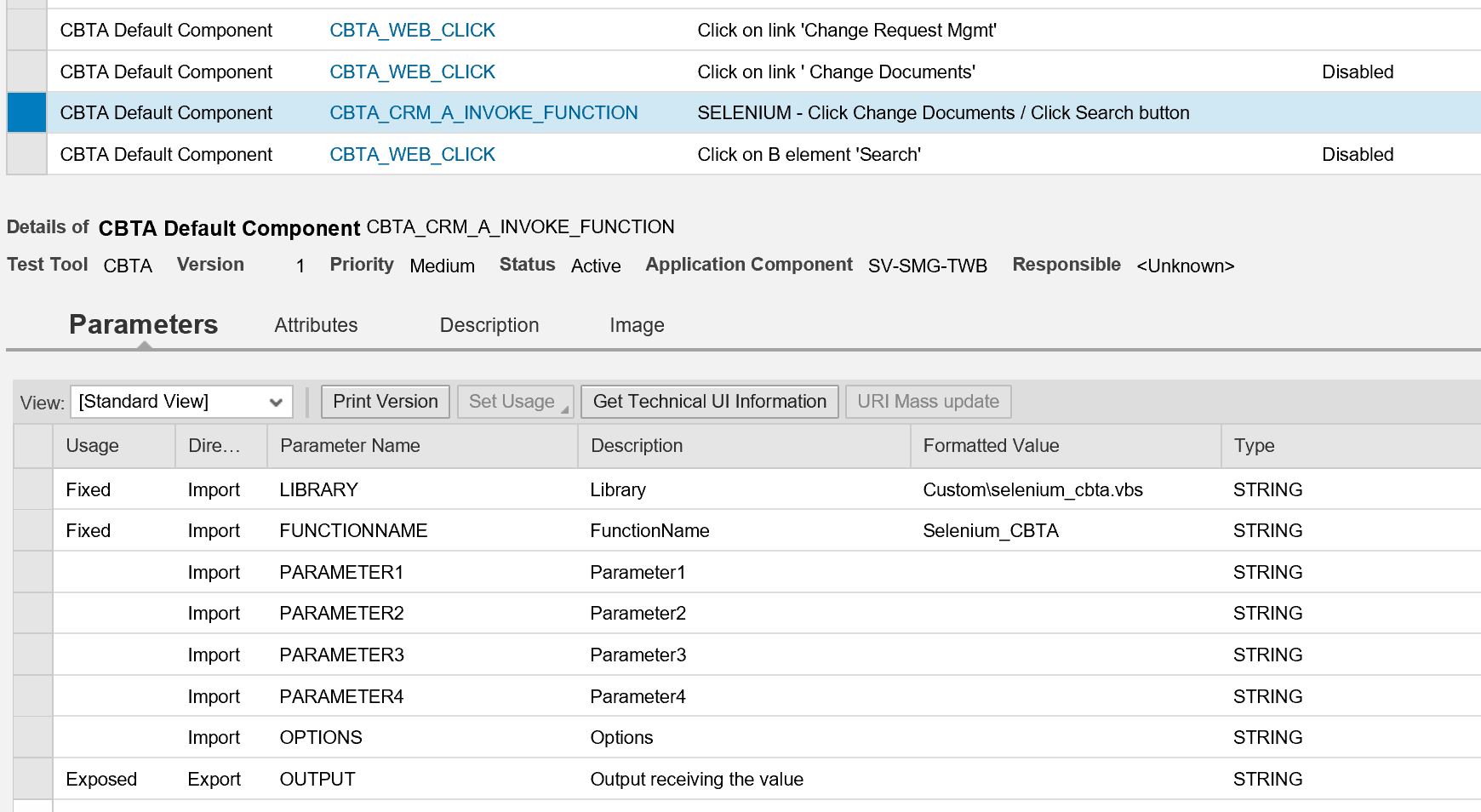 Save the script and run it. You should notice… no difference whatsoever. Because we chose to trigger Selenium in the background, there is no way to differentiate it from CBTA without having a look at the execution report: 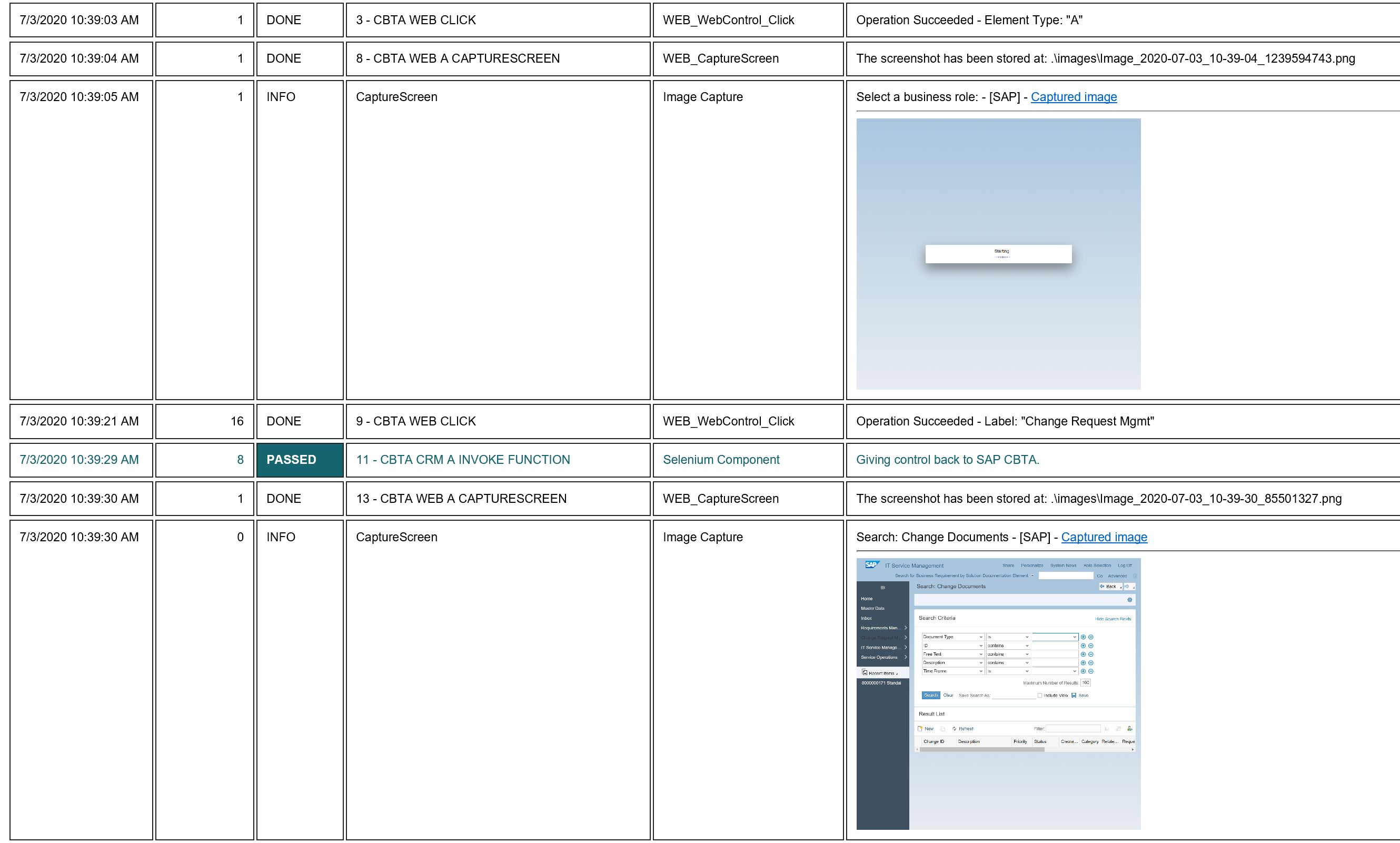 Nicely Explained, but i have one question, am also trying to implement automation for COUPA application with CBTA , but observed that recording is working, but during execution properties keep on changing dynamically. can you please suggest should i follow integration with selenium and CBTA approach for this. Please reply.

If you mean the URI is dynamic, then you need to use the CBTA Query API to handle those changes. You can refer to your local "CBTA 3.0 - Query API.pdf" document for examples, etc. !

Thanks for the details steps. Helped this very much

How do we pass results back to CBTA after selenium execution. Is there any function available for passing data back to CBTA report.

Unfortunately I haven’t been this far with the data management. Selenium IDE command runner logs are pretty limited so you would have to find a way to store the test steps output with your own custom logic. If you can do this, then it’s pretty easy to add that information to the CBTA report with VBS.