I’ve been playing around with CAP for NodeJS, developing business applications for customers as well as some fun projects. In those apps I had to add a UI5 app to interact with the service layer of the CAP framework.Some of these UI5 apps were not fiori elements but  freestyle UI5 apps. The documentation of CAP is more focussing more on Fiori elements instead of real freestyle apps: https://cap.cloud.sap/docs/guides/fiori/

Even in the OpenSAP course they used Fiori Elements: https://open.sap.com/courses/cp7/overview

Adding a freestyle UI5 app is probably very similar to Fiori elements. Still I think it’s worth to mention something about it.

In the SAP Web IDE and SAP Business Application Studio you can use the wizards that will generate your UI into the CAP project. In VS code, you use the Yeoman generator of Marius Obert: https://blogs.sap.com/2019/02/05/introducing-the-easy-ui5-generator/

Nevertheless, it is always good to know how to do it yourself, to know your options, to know what’s being generated. That’s what I did and what I’m going to share in the next steps:

Started project by following these steps:

Just for now, remove the authentication:

Before we can add a UI5 app, we need to implement the OData v2 proxy adapter: https://blogs.sap.com/2020/06/30/how-to-add-odata-v2-adapter-proxy-to-your-cap-project/

For generating the UI5 project, I used the official yeoman generator to create a project, more info:

Start by installing yeoman for rui5 with the following command:

Go to the app folder: cd app (it is important to stick with the folder “app” as this is being used by the “cds” commands to search for the UI layer)

Use Yeoman to create the UI5 project with one of the templates:

Fill in all the fields of the yeomand wizard: 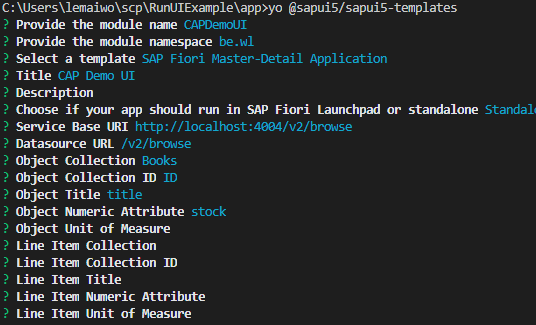 As soon as the yeoman wizard is finished, you will see the following files in the app folder: 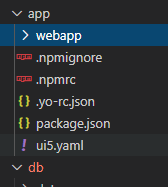 Run the UI5 app with the UI5 Tooling

After the template is generated, you can run npm install and start to test the app using the UI5 Tooling:

This will only run the UI5 app but not the CAP service. Therefore, you need to open a second terminal and also run your cap project.

When opening the browser on localhost port 8080, you will be able to test the app with data from the CAP project: 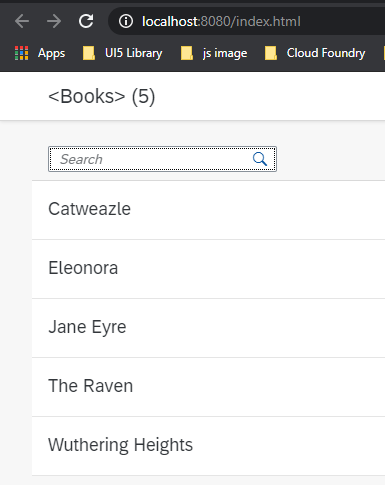 Unfortunately the UI5 serve command will not work on Cloud Foundry:

On top of that, it is not able to work with authentication, for example when we make the service only available for authenticated users:

It could be used for testing purpose but not productive when working with authentication to your SAP IAS or the SAP default IDP, it will not be enough…

We need to implement the approuter to be able to authenticate to an SAP IAS or the SAP default IDP. This is required to run in productive mode and can be used to test locally although you can run without it locally.

Change the package.json in the app folder as followed to use it when running in SCP CF:

I changed the name of the original start script to “serve” so this can still be used and I added a new “start” script to run the approuter. Next to that, I added the approuter as a dependency.

Link to package.json of the UI5 app: https://github.com/lemaiwo/CAP-UI5-APP/blob/master/app/package.json

In this file, you notice that I add a route to the dist folder and one to the webapp folder. The dist folder is for productive usage and the webapp is for debugging. I know that you can turn on debuggin in UI5 but it gives me another option to access the debug files.

When using the approuter, we also need to change the path to the OData service in the manifest.json. Add a “/” in front of the uri: 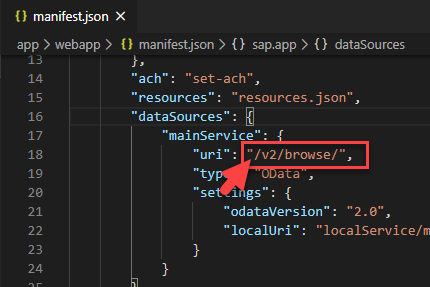 Almost ready to test the approuter but first we have to add configuration for the approuter to know the xsuaa service in SCP and a destination to the OData service for testing locally.

Add another file “default-env.json” in the “app” folder: 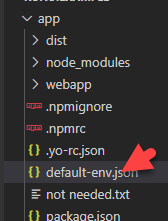 Add a section for the destination like this. The approuter needs this to find the CAP service that’s running locally. On SCP CF this will be resolved by the MTA config: 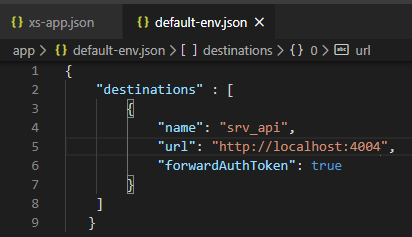 And add VCAP_SERVICES with the details of the xsuaa service that you use in your SCP account: 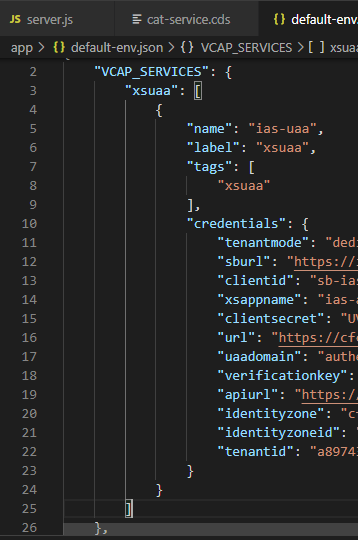 The same file needs to be added to the root project with only xsuaa part: https://github.com/lemaiwo/CAP-UI5-APP/blob/master/default-env.json

Now we are ready to start the approuter.

Go to the app folder:

Install the approuter by running the command npm install. I already added the dependency earlier to the package.json:

We need to build the app to have a dist folder. This is needed because I have defined a route to the dist folder in the xs-app.json file earlier. If a path in one of the routes is not available, the approuter will fail to start:

We also need to start the OData service in the CAP project. Before we can run this, we need to change the authentication mechanism to JWT so it can handle the requests from the approuter. Add the following to the package.json file of the root folder: 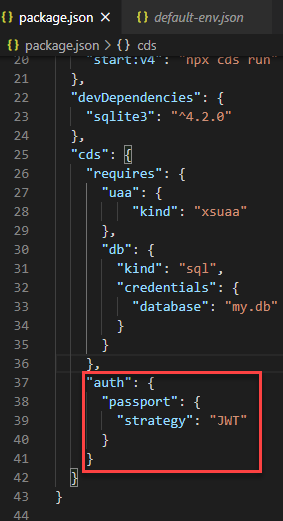 Open a second terminal and run the command: “cds run”

We can now test the app via approuter on localhost:5000

⇒ The approuter will detect that authentication is required and forward you to the right Identity provider, by default it will be the SAP IAS 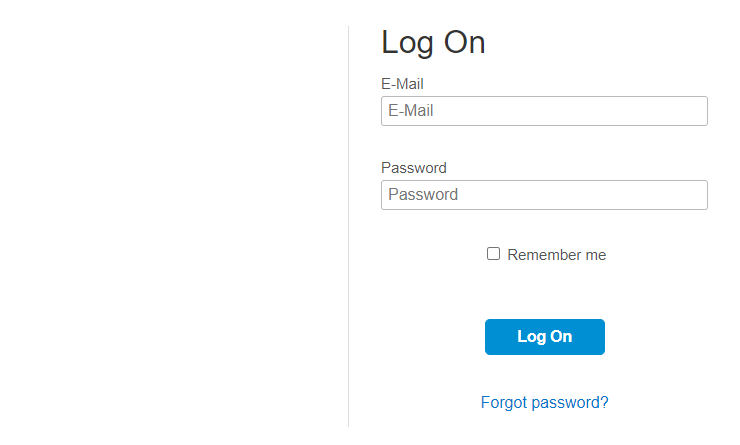 After authentication you will have access to your app and the service. But this still requires to run two terminals just for testing the app. Of course, this could be simplified by creating a custom npm script in the package.json.

Nevertheless, there is still an easier way to do the same which I will explain in the next section.

Instead of running two terminals, remove the authentication config in package.json and simply use “cds run” 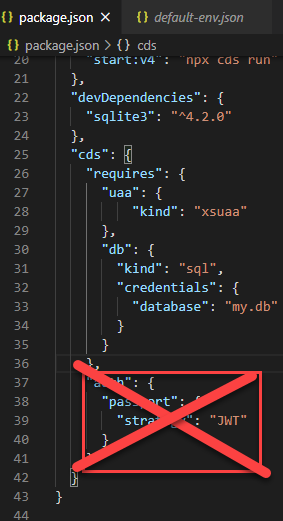 You will get a basic auth popup, you can fill in whatever you like or just nothing and hit enter to authenticate: 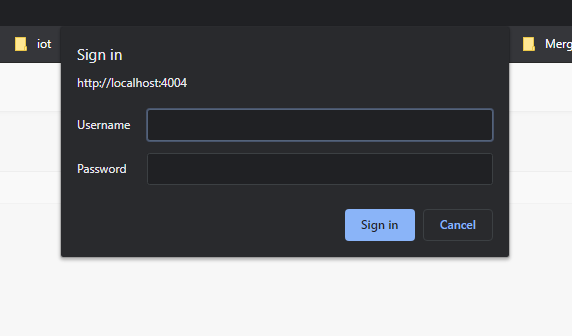 Just like in the two previous case, you will have access to the app and the service behind it. With only one simple command 🙂

If you want, you can configure mock users for the basic authentication dialog. You can find more details about that in the official SAP documentation here: https://cap.cloud.sap/docs/node.js/authentication#mocked

Use UI5Tooling in MTA Build process

For deploying to SCP CF you can follow the steps here:

Switching to hana is not needed anymore, like explained here:

You will still need to add some config for using the UI5Tooling when building the MTAR. Therefore, I will still add the following steps here:

First, run cds build which will generate a gen folder with all modules:

Generate an mta.yaml file to start with by using the following command:

We will still need to add the “ui” module to the mta.yaml configuration file. Here we define a custom builder to use the UI5Tooling in the MTA build process ui module.

I had some help for this configuration from SAP:

Now we are ready to build the MTA and deploy to SCP CF with MTA Build Tool as described in the documentation:

You can add a UI5 freestyle app like you would do otherwise, you just need to make sure it’s being added into the “app” folder. For running the UI5 app in the CAP project with the service there are several options possible:

My suggestion, add the UI5 project, configure the approuter and run the app (UI and service layer) using the UI5 tooling or with cds run/watch.

The choice between UI5Tooling and the CDS tooling all depends on your needs for developing UI5 apps.

As mentioned earlier, for setting everything up you can use the Yeoman generator of Marius Obert: https://blogs.sap.com/2019/02/05/introducing-the-easy-ui5-generator/

But it’s always good to know how it works 🙂

The full project is available on GitHub: https://github.com/lemaiwo/CAP-UI5-APP

Thanks a lot! This blog helps me a lot with some doubts. As always thanks for sharing and help us!!

I absolutely agree it's essential to know the configuration/setup-steps that are necessary to integrate a UI5 web app in CAP/CF projects. If one of them is broken, you need to be able to identify the error and know how to fix it. This post certainly helps much!

Thanks a lot ! A great post, I have been playing around with CAP and using the SAP Fiori tools - Extension Pack. Appreciate if you could also showcase this in your next blog.

Thanks for sharing Wouter.  You're absolutely right that there is very little info out there about using freestyle UI5 apps alongside CAP.  Fiori Elements apps are often useful for 'admin' scenarios but freestyle apps are still often necessary for the main UI.

Thanks a lot! This blog helped me to build what I wanted. It was so useful, could you also let me know if there is any blog for doing the logoff/logout as this is with Authentication, it is asking for login when users want to use app but the session is not logged out from cloud account after trying to add a log out page and used the below. Please advise.