I am back with my next blog post in this series of HANA XSA Simplified. In this blog post; I will explain mainly on 2 process related to WebIDE and GIT. 1st is how can developers in same project share objects among them and 2nd is accessing the objects which are already deployed on Quality Assurance (QA) and Production (Prod) system.

You can follow the below links to visit the earlier blog posts in this series.

In HANA XS advance, we use WebIDE for development. WebIDE is a web-based development tool for all the native HANA developments in XSA. To know more about the WebIDE please refer the below link.

HANA XSA do not have inbuilt central repository like HANA XS classic. WebIDE is personal for every developer for example: Developer 1 and developer 2 are working in the same project but Developer 1 cannot see what Developer 2 has built in his WebIDE and vice-versa. They cannot use each other’s objects in their developments. In projects with large number of developers this can be a very difficult situation to handle as there is always a dependency of objects developed by different developers.

To handle this situation in XS advance, we use Git as a central repository for sharing the objects within the project team. Developers who are already working in some other open source technologies might be already aware of how to use the Git but developers who has only worked in SAP technologies might not be aware of it. You can find more the details about how to integrate/setup the Git for WebIDE and different options available in Git at below link.

WebIDE is only used for the development of different artifacts. It is only connected with Development Space. Once you deploy your .mtar files to QA or Prod system there are only few ways to see what is deployed on the QA or Prod Space.

2nd way is by using the GIT repository. I have described the process below in details.

In this example, I am considering 2 developers DEV_1 and DEV_2 working on the same project. DEV_1 is also a lead developer who has authorization to deploy the .mtar file to QA and Prod systems. 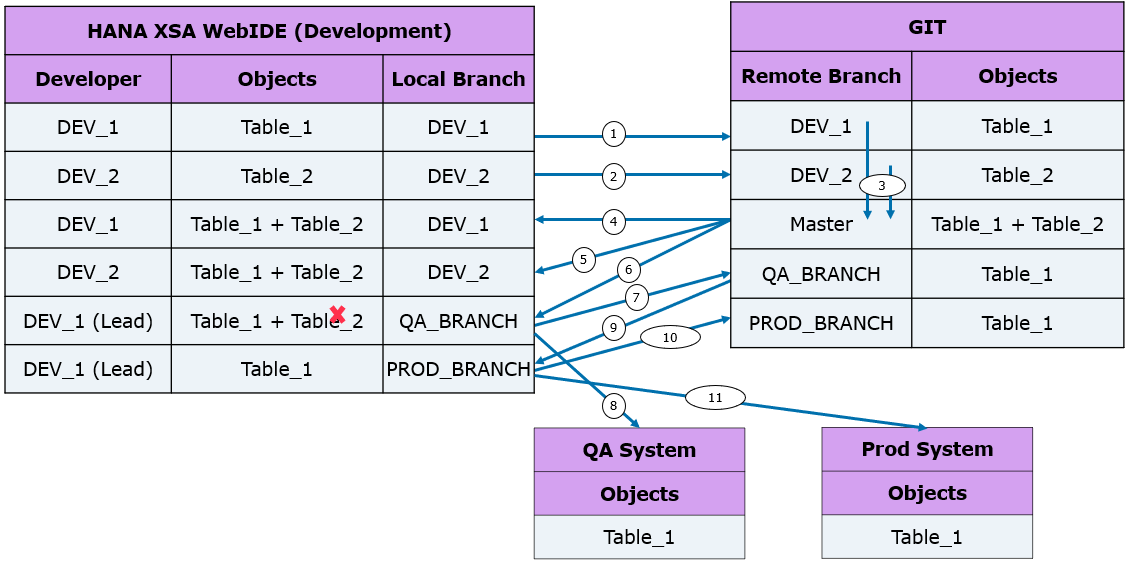 Hope this blog post will help you to setup the process with Git and WebIDE to share the artifacts within your project and maintain the QA and PROD versions in Git.

Can you help in finding some documentation exporting HDI Role from XSA to XSC database? How could we achieve it?

I did not understand your question completely. Please could you elaborate it more. I have another blog post https://blogs.sap.com/2020/07/27/hana-xsa-simplified-4-sap-hana-database-authorization-provisioning-for-hdi-container-roles/ where you can find Best practices and recommendation for HANA XSA authorizations document at the end. This document might help you to solve your question. Please provide some more information if this blog do not solve you problem.

Hello Vivek - I am interested to develop database admin roles in central XSA system and use the same roles for multiple HANA systems which doesn't have XSA infrastructure installed.

Vivek, Great article and very useful, thanks for sharing.

Great article Vivek! One question regarding XSA best practices for setup for medium to large development teams in XSA. Should each developer be setup with his/her own space and work in that space, all the time pushing and pulling from a remote GIT repo? Or would all developers login to the same space in XSA and create their individual components? If this is not clear I would be happy to provide more details.

I did not understand what are you exactly refer as a 'Space'. For now I will consider space which we create under the organization in XSA cockpit. It is not good practice to have separate spaces for each developer. Good practice is to have have a single space for one project and then multiple developers are working in that project. Developers are using push and pull from the Git repository to have all the development in sync. If all the developers are working in different spaces and projects then it will be difficult to get the dependent object in one single project. I hope this answer your question. If not please elaborate more on your question.