Very often in projects involving multiple users with complex system integration, it happens that due to some reason BO (Business Object) instance is locked by integration or business user. This causes the update failure.

In case you would like to know the business object instance locking status then you can utilize SAP provided standard Reuse Library “BOAction”. Thanks to Jürgen Ravnik for giving the tip.

Note: Reuse Library “BOAction” comes as part of “AP.PlatinumEngineering” namespace which is, in general, not officially supported by SAP. In most cases, they are very well equipped to support key business features like Sending Email, Getting the code list value based on data type and more. But unfortunately, they are not bound to SAP Contractual Support SLAs.

The use case I am defining here is entirely hypothetical and could be easily achieved by standard features.

We want to show the error message as soon as a user saves the custom BO instance. hence I have created ABSL script for Validation-OnSave of Root node for my Custom BO

Go to generated UIs for your custom BO and create a new instance of your custom Business Object. Fill in the mandatory field and press SAVE. At this moment a call will be fired to the backend SDK (You can also set a breakpoint in the ABSL script to simulate the scenario) and an error will be raised and instance save will be rejected. 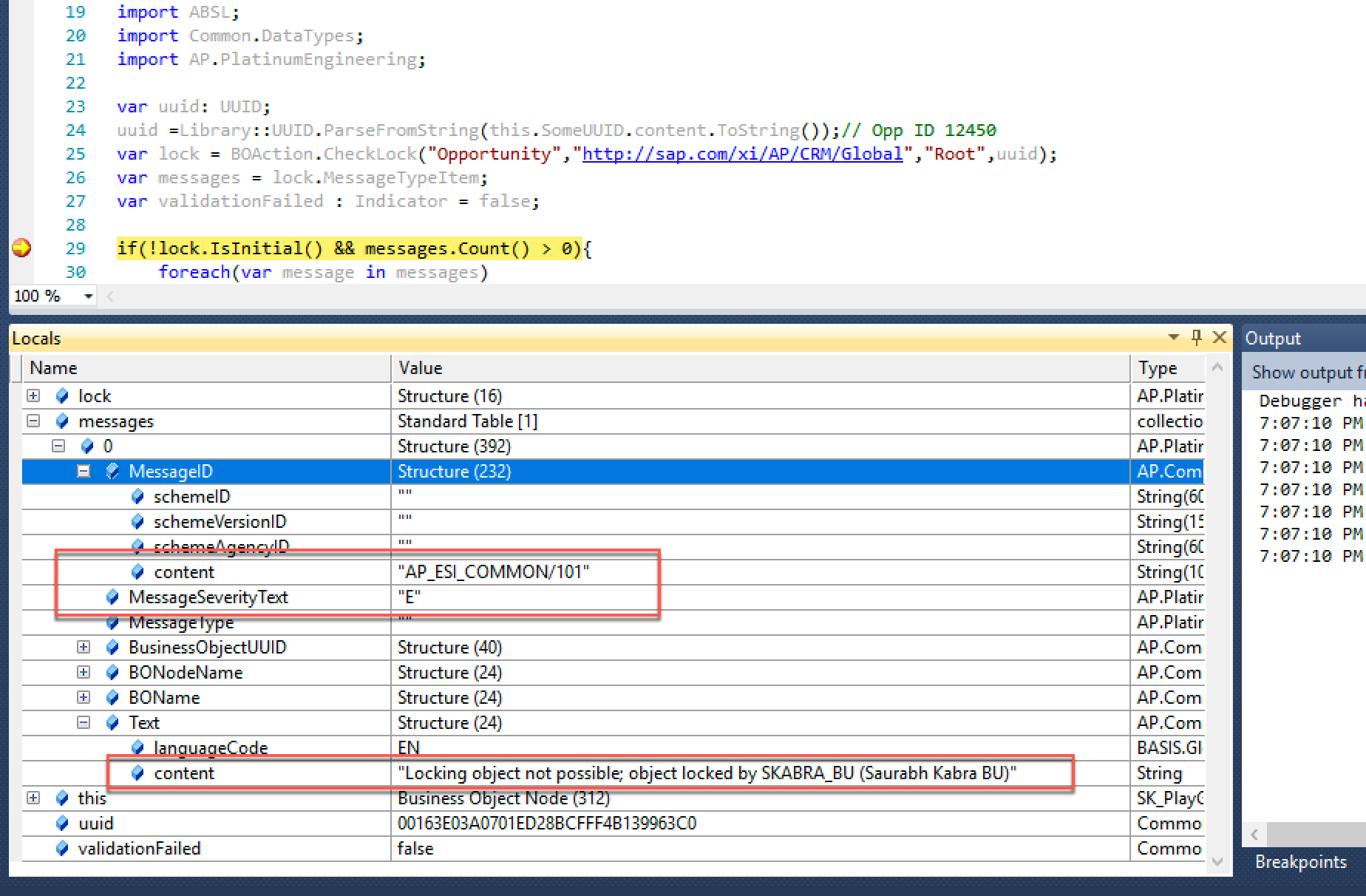 Using “BOAction” we can not just validate if the Instance is locked but can also check if an action is allowed (IsActionAllowed) and many more.

Further, It’s worth noting that AP.PlatinumEngineering namespace, in general, offers many such Reuse Libraries which are neither documented anywhere nor have been discussed. So it’s worth spending some time exploring what these libraries can do and share them with the whole community.

PS: This was my first attempt to write a blog and now I know how “difficult” it is to write down but at the same time how insightful it could be when you actually write it down and find out things which you could have simply ignored in general.

About Platinum namespace… My POV is that it needs to be documented or should not exist at all. There are so many usefull feautures/libraries there. But without an ability to debug them or read their code, it might be just a time bomb if you’re not certain what this or that library is doing.

I’m also wondering how it works from legal perspective. Having doubts there is any explicit statement regarding this particular namespace in customer’s contract. And not sure that the mentioned KBA is good enough to reduce the support scope and liability.

Reg documentation of these Platinum Engineering based libraries, I also feel the same that they should be documented. In fact, I raised it as an Idea some 2-3 years back (then idea forum) but it was rejected.

However, They have really helped me in the past for my project work hence I tend to use them occasionally wherever needed.

Thank you for this blog.

We have a requirement where we need to update the customer's ABC classification from the "CustomerQuote-beforeSave" event (the value depends on related sales orders), but sometimes our code is run at the same time where the customer is being updated by incoming information from ERP.

so to make sure the code is executed as it should, I used your suggestion on how to check if a BO is locked before triggering the change in the Customer BO.

The code is supposed to keep checking if the BO is locked every 5 seconds (at least) until the BO is not locked anymore, and then proceed with the update of the ABC Classification.

Here is the code I'm using:

To test it (in the test system), I lock the Customer from the UI, and then do some modification (from UI) on one of its Sales Orders; The code seems to work just fine during my tests, the loop is running until I unlock the Customer from the UI, and then the rest of the code is executed, we also tried do simultaneous updates from ERP and seemed to work fine (but I couldn't debug this because it's done by technical user)

But this doesn't seem to work well in our PROD system, the ABC Classification is not updated as it should when there is concurrent access to the customer BO.

So, I'm wondering if there is something wrong with my code.

Can you please check it and give me your feedback?

Saurabh Kabra - Could you please guide here? Aicha has some implementation query on the instance locking issue for Customer BO.