Connecting to custom sources with a JavaBean

The SAP BusinessObjects BI Platform implements support for a wide variety of datasources. However, there is always a datasource for which a connector is not available.

JavaBean is one of the solutions to connect the BI Platform to such datasouces. It enables customers or partners to write their connectors using the Java language. These connectors can then be used as datasources to fuel WebI reports.

The JavaBean features described in this blog are shipped with SAP BusinessObjects BI Platform 4.3 (see BI 4.3 new data sources). If you are using a previous release, please upgrade before attempting to replicate this article.

This document aims to :

Before jumping head-first into writing code, it is best to ensure that the right solution is chosen.

The BI Platform was built for relational datasources. In this world a database can expose a set of tables, which can be queried using the SQL language. Using this language the BI Platform filter, joins and aggregates data from different tables.

Connecting to a relational datasource assumes the datasource implements all these features, including a runtime for the SQL language. This can be very costly to implement.

JavaBean, on the other hand, is designed to be simple to implement. As a consequence support for a query language or query constructs is deliberately not part of this technology. A JavaBean’s goal is to return a table to WebI. Any extra filtering, joining or calculations should be implemented using the WebI calculator directly in the report.

However, this leaves out the world of non-relational datasources: files, custom servers, machines, web services… These can provide valuable data, but not a full relational implementation. JavaBean is the right choice for these:

To demonstrate how to write a JavaBean, it is best to rely on a real-world example. Source code extracts from this chapter are from a working bean  Full source code can not be copied here as it would be too lengthy, but key points are demonstrated.

We are currently living a crisis where the COVID-19 has grown into a pandemic. Major health organizations are now publishing data about the state of the pandemic, and it would be interesting to be able to analyze this data using our usual BI tools.

The dataset we are going to analyze is the data published by the European CDC, at https://www.ecdc.europa.eu/en/publications-data/download-todays-data-geographic-distribution-covid-19-cases-worldwide. Our goal is to connect to the data live from WebIntelligence

The data is available in JSON, unfortunately the BI platform cannot connect to JSON datasets. Being able to connect to the data using the URL would enable live reports on the latest data.

The dataset is basically a table, is not accessible through a relational database, but can be accessed through code. This fits nicely within the scope for a JavaBean.

In order to make the bean reusable, it would be better to enable it to access data at other locations. However, if we attempt to build this, we may encounter any kind of JSON data, which would be a huge task to undertake. So our approach is to expect the datasource to return an array of JSON objects that have the same flat structure (no nested objects), but instead of downloading directly from the URL, we invoke a script (through a scripting engine) whose purpose is to reformat the JSON for the bean. 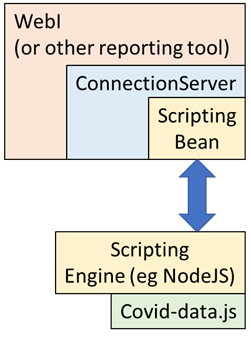 As a consequence, the bean can be used to access a much broader set of data sources than just the COVID dataset we started our investigation with.

To summarize the requirements for our bean are :

Before starting to write a bean, we shoud understand how it is structured and how it is consumed by ConnectionServer and the BI Platform consume it.

A JavaBean is basically a Java class. The name JavaBean is mostly historical: our previous implementation of the connector relied heavily on the JavaBean specification. This dependency has been lifted, but the name remained. For the sake of simplicity, the rest of this document uses the “bean” term to refer to the Java class consumed by the JavaBean driver.

In order to return data to ConnectionServer, methods are expected to return a tabular ResultSet (as defined in the JDBC specification).

Finally, in order to enable ConnectionServer to instanciate and initialize the class, the bean must implement a constructor with no arguments and the initialize method (described later).

The schema below summarizes the requirements to enable a class to be exposed through the JavaBean driver :

Arguments can be passed to the bean in 2 locations: at initialization time through the initialize method, or to each stored procedure when it is being called. These calls are associated to different artefacts (and so, called in different circumstances):

Each bean writer is free to have the user communicate arguments to his bean the way he prefers. In our case, we will associate a connection with a scripting engine (for instance NodeJS), and have the desired script passed to the stored procedure that actually invokes the script.

These design choices are made, so we are now ready to start writing our bean :

As can be seen, there are no specific constraints on the bean class itself: it does not have to derive from a specific class, or implement interfaces(s). So, in our case, it can simply be a class.

Constructor with no arguments

The bean class must implement a constructor with no arguments, which will be used by ConnectionServer to create an instance of the bean at runtime :

Once ConnectionServer has created an instance of the bean (using the constructor we just wrote), it initializes it. The bean is going to be used as a connection (as in “connection in Information Design Tool), and, as such, the initialize method has arguments that enable the bean to retrieve configuration and connection information:

This is the only method a bean must implement: the name is imposed, as well as the argument list. It is worth noting that the Context class is part of the ConnectionServer jar (located in SAP BusinessObjects Enterprise XI 4.0\java\lib), so bean implementors must include it in their projects.

Arguments for the initialize method are:

It makes sense to store bean configuration in the ConnectionServer folder structure, so beans may need to identify where ConnectionServer is installed. This is possible by reading the businessobjects.connectivity.directory environment variable, using code that may look like this :

Finally, the bean may throw exceptions (in our case, ScriptingBeanException). The BI Platform products handle such exceptions and display them to the end user. In case of issues exceptions also get logged, so it is recommended to make use of exceptions to raise issues when they occur.

At this stage our bean can be loaded in the BI Platform, but it is not able to expose any data.

So, in order to be able to invoke a script and return its results, we can simply write:

The crucial part resides in implementing the ResultSet (our JsonResultSet object) to transform original data into the expected tabular format. This is explained in the next chapter.

The method will be exposed as a runScript stored procedure.

It is also worth noting that throwing exceptions is possible from these methods as well. Again, the BI Platform would raise them to the end user. It is good practice to take advantage of this feature as it improves usability for the bean.

ResultSet and its metadata

Methods that are to be exposed as stored procedures must return an object that implements the ResultSet interface. As can be seen in the code snippet above, we have implemented it under our class JsonResultSet.

This may seem a very tedious task as the ResultSet interface describes dozens of methods. In addition to this, the BI Platform also relies on the ResultSet to return its metadata, which means implementing the ResultSetMetaData interface.

So it is best to start from an existing implementation and replace it with your own rather than trying to rewrite this class. Full source code to the bean described here is provided, and the product ships with a sample for Google BigQuery (different from the full BigQuery connector, for which source code is not provided).

Bean implementors should also keep in mind that the BI Platform only uses a small subset of the ResultSet interface, so attempting to implement all methods is essentially waste. If in doubt about whether or not to implement a specific method, it is possible to raise an exception stating the method is not implemented: if the BI Platform requires that method, the exception will surface during a workflow.

Parts of the ResultSet interface that must be implemented are:

At this stage the bean implementation is complete. In our case the bean should expose one stored procedure named runScript, taking one argument: the script to be run.

Testing and packaging a JavaBean

At this stage the bean can (and should!) be tested.

The workflow that should be tested is:

The testing code provided with the ScriptingBean implements this workflow, and handles all datatypes the BI Platform may expect.

To be consumed by the BI Platform, the bean needs to be packaged as a JAR file. It is possible to ship multiple JAR files for a bean, but they should all be provided together. Bean implementors should simply make sure that a bean and all its dependencies can be provided as a set of JAR files.

For its consumption, bean implementors must also provide:

Consuming a bean in the BI Platform

In order to deploy a bean, administrators just need to go to the SAP BusinessObjects Enterprise XI 4.0\dataAccess\connectionServer\javabean folder, and create a folder in which the bean’s JAR files are stored (all JAR files required by the bean must be stored in this same folder). The folder name should be simple, and consistent across deployments as it is needed to create connections.

Any configuration files can be deployed as well, so in our case we are copying the files as below: 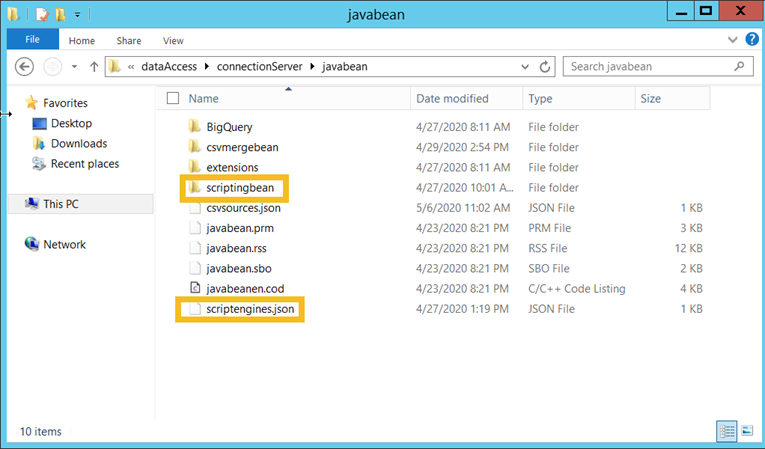 As always, the files need to be copied on all systems where the bean is to be used, ie clients and servers. Once the copy is complete, client tools and servers should be restarted.

Once the copy is complete, it is possible to create a connection using the Generic JavaBean connector in Information Design Tool. The connection wizard slightly differs from the usual relational connectors: 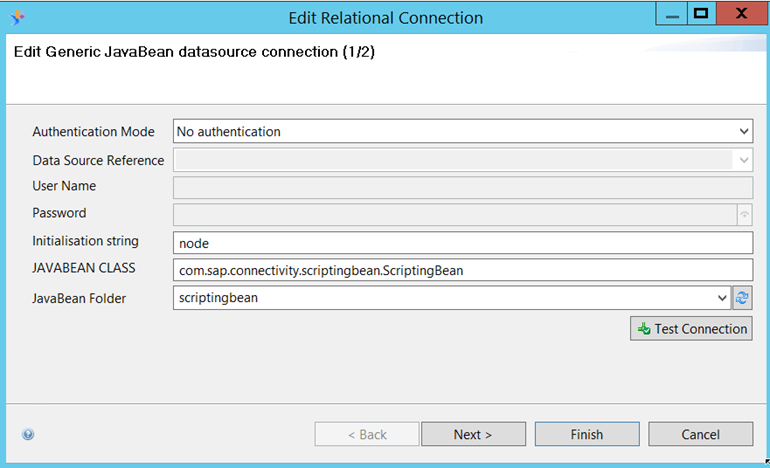 This dialog can be read with the contents of the initialize method in mind :

Once the connection is created, it can be consumed in a data foundation. The data foundation exposes one database which has the class name, and a stored procedure for each of the methods the bean exposes : 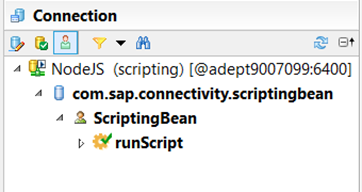 When a user drags the stored procedure unto the universe structure, he is prompted for parameters, which match the method parameters : 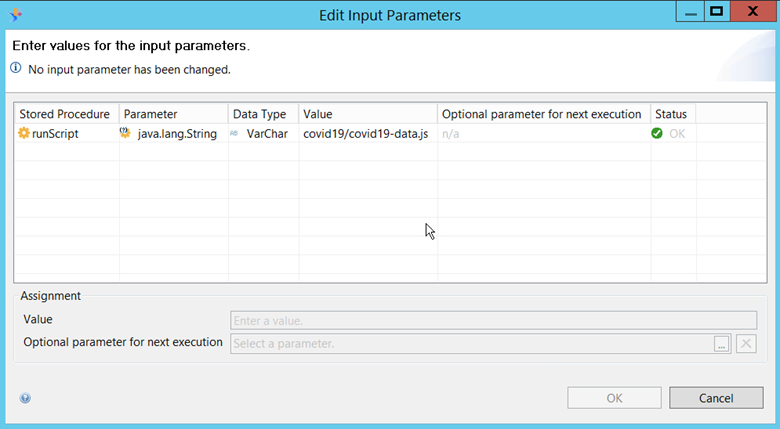 Once the parameters are confirmed, the method is run and the resulting table is inserted in the universe structure. 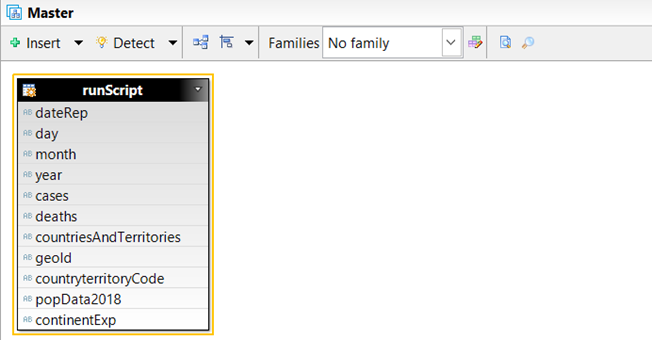 The table is just like another table, with the limitations that come from stored procedures:

Since the WebI calculation engine implements these features, the end-user can benefit from the same feature set as with other datasources. Universe and report designers should simply take these limits into account :

Other features should work as usual, and so the JavaBean should open a world of possibilities for data access:

For instance, this is the kind of report that was generated on COVID-19 data using the bean described in this post :

Full sources to the bean described here, including the universe and webi document, are available on this page .

The BI Platform also ships with a sample demonstrating a JavaBean connecting to Google BigQuery, for which sources are available at <install folder>\SAP BusinessObjects\SAP BusinessObjects Enterprise XI 4.0\dataAccess\connectionServer\DDK\examples\BigQueryJavabean.

Thanks for the useful information. This is an amazing and informative article. Good job!

This is a very helpful article, but the source code is not accessible. Can you upload it again?  Thanks!