This is again an amazing blog post.
Not because the blog itself, nor the writer would be so amazing:
It is the fact that it is possible to debug serverless functions
Which is – in conjunction with local development shown in the previous blog – a fantastic feature of Function-as-a-Service in Serverless Runtime.

Note:
This is a small tutorial, but explained in detail for beginners.
Advanced users can directly jump to the Quick Guide

You must have followed the previous blog, showing how to write and run functions on your local laptop.
As such, I assume you have the FaaS SDK installed on your local machine

You need an IDE which supports debugging, e.g. Visual Studio Code, which I’m using for this tutorial

Finally you don’t even need to be connected to the internet.
Really, you can switch off your internet connection
(But don’t delete the internet: you’ll need it to press “like” afterwards)

Since we want to debug a function, we need a function project.
If you don’t have anything at hand, you can create a project like this

In Visual Studio Code, open the “File” menu, then click “Open Folder” and enter the project root folder of your functions project

Now that we’ve opened the code that we want to debug, the next thing to do is to create a debug configuration.
On the left side pane, click the “debug” icon
Then click the small “configure” icon 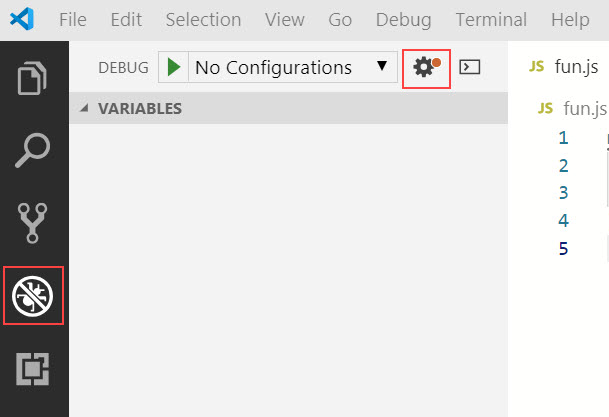 As a result, a launch.json file is generated and opened to define the launch configuration for the current project

The important setting to configure here is the “program”:
Which program should be launched by the debugger?
Answer: the FaaS runtime
More precisely: the cli.js of the FaaS SDK
How to find out the path?
The previous blog told us to install the FaaS SDK globally (with -g option)
As such, it is located in our home dir.
Where?
That can be figured out with the following command
npm list -g
This command lists all globally installed packages and it prints the location
The result might take a bit long, but it would look like this:

Based on this output, in my example (Windows 10) the path to the cli.js looks as follows:

However, we cannot just copy&paste this path, because the launch configuration is a json.file which treats the backslashes as escape character
As such, we have to adapt the path and enter as value for the “program” property in the launch.json file

What else?
Next we need the “args” property. It contains information about command line arguments.
Remember how we learned in previous blog to use the command faas-cli run?
It is the same:
The faas-sdk command to run a function is : run
As such, we enter an array with one entry for the “args”-property:

Anything else?
Last setting (optional ): enter a name of your choice for the launch configuration,
e.g.:

Finally, the whole launch.json file looks as follows on my machine:

Note:
Make sure to replace the myUser with your user.
Ah – and BTW, make sure to adapt the whole path to the FaaS installation according to your system, if required

Note:
After creating and configuring the launch configuration json file, make sure to save it
This file has now been saved in your project root folder as .\vscode\launch.json

Now the name of our launch configuration has been entered in the drop down field: 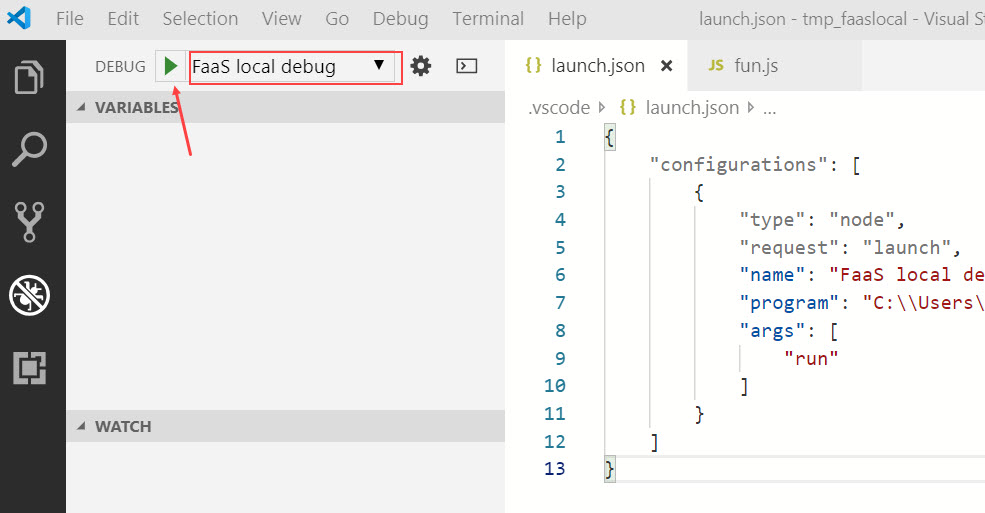 To start debugging, a launch configuration has to be selected.
Then the green arrow has to be pressed
The debugger runs the configured program
The Functions runtime is started.
We can see the log output (which we already know) to the debug console 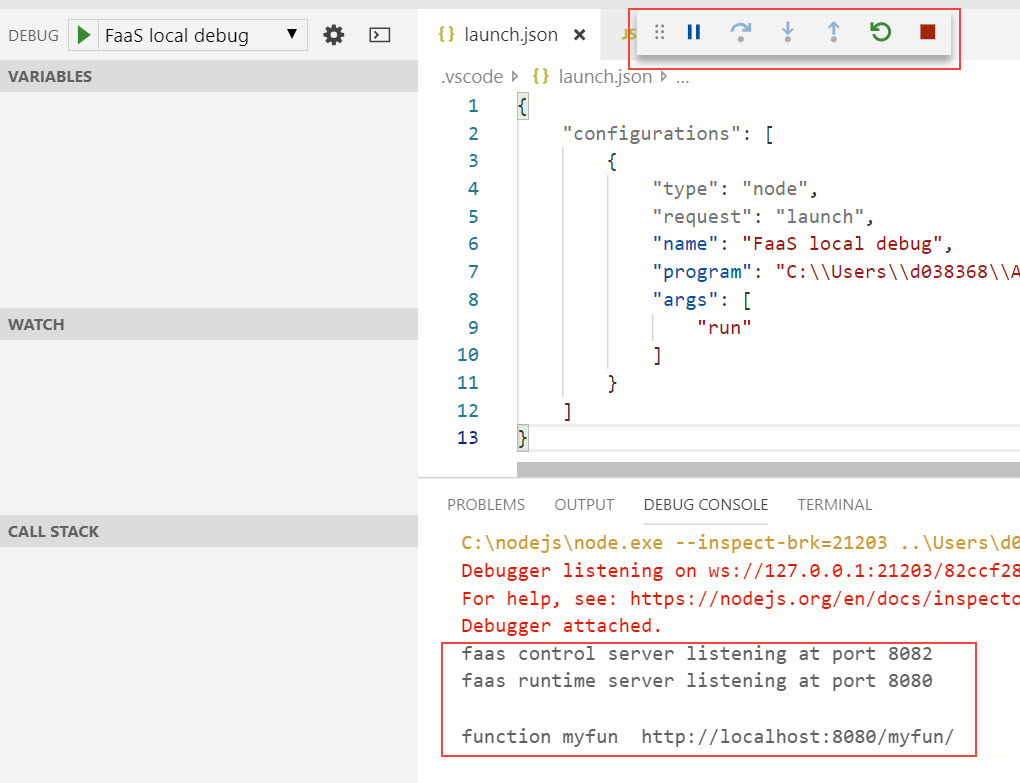 Now that the FaaS runtime is up and running and listening, we can invoke the function.
The URL is given in the debug console, in my example:
http://localhost:8080/myfun

That’s already all about debugging
Almost
I hope you’re not disappointed due to the fact that “debugging” means “debugging local” only.
If yes:
Please switch on your internet and like this blog – to encourage the development team to develop more functionality in functions
If no:
Please like this blog just, to motivate the team

In above chapter I described the – what I thought – easier way to create a debug configuration:
Using the globally installed FaaS SDK as program to be launched

The better way:
Have the FaaS SDK in local project folder and point to it via variable

1) Add the FaaS SDK as “devDependency” to your package.json

One big advantage:
This config doesn’t contain hardcoded information.
As such, you can reuse it for all projects, upload in GIT, etc