SAP has implemented Cloud Foundry (CF) on its SAP Cloud Platform, as a next-generation Platform as a Service (PaaS) as a development and runtime environment. CF offers a set of tools and services to run applications developed with different programming models.

We will cover specific aspects on how to prepare your XSA execution environment for Go-Live phase and make sure your applications run safely with given constraints on memory resources.

A Software Developer is free to choose almost any IDE, programming language and development environment to deploy applications using Сloud Foundry on SAP Cloud Platform. SCP is an excellent solution for companies that plan to make cloud services out of existing software running on-premise.

Before doing architecture development your Software Architect should be familiar with Cloud Foundry execution and deployment tools and features in order to plan the software migration to the cloud.

XSA runtime platform inherits the same architecture as Cloud Foundry and runs on-premise as part of SAP HANA. That means that most of the design concepts of XSA are almost identical to CF and can be found here.

Each node running XSA can hold different roles like xs_worker and xs_standby that help initiate application failover to the standby node in case the worker node fails.

According to the XSA architecture shown below (Figure. 1), there is one master XSA node running xs_controller and multiple xs_worker nodes. XSA scale-out concept details are described in the SAP HANA Administration guide, in the chapter about “Scale-Out Architecture of SAP HANA XS Advanced Runtime Platform” at http://help.sap.com. 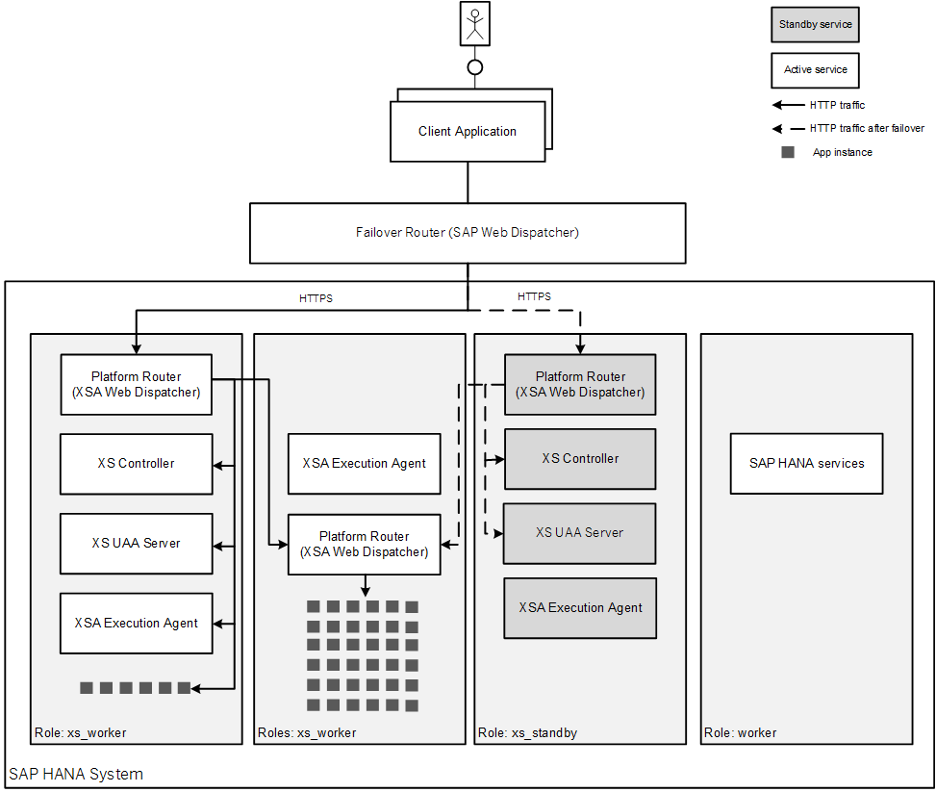 XSA Scale-out is capable of doing load balancing by putting Failover Router (Figure .1) in front of XSA nodes. In order to get proper access to the applications, you should plan and configure one of the routing modes:

While doing DNS configuration to satisfy hostname-based routing for XSA, you should maintain at least two records:

In order to plan the sizing of XSA nodes you should refer to the SAP HANA Administration guide, chapter “Platform Sizing in XS Advanced” at help.sap.com. There are two profiles available for XSA depending on usage: PlatformUsage and AppUsage. The second one AppUsage is intended to establish reliable service of running applications for business users and sized upon the number of concurrent application requests (check the table below).

What are the benefits of XSA Scale-Out configuration?

An example of configuration steps for XSA will be provided in a subsequent blog posts, here we will only cover the basic principles of landscape layout to set up Multi-Host XSA.

In order to prepare the final memory requirements for XSA scale-out nodes, you should take your application requirements into account based on workload profile per user.

For standard memory requirements for XSA you should refer to the SAP note 2618752 «Resource consumption of SAP HANA extended application services, advanced model».

Supported hardware requirements for XSA can be found at SAP HANA Hardware Directory.

While planning XSA nodes configuration you may select any available hardware platform to distribute applications workload on physically isolated server.

XSA architecture contains a mechanisms for creation of a custom runtime environment for different languages so-called «buildpacks» that help with application deployment and perform the following scenario:

The buildpack itself is a set of scripts and binaries that perform the scenario described above and actually can be customized and configured to satisfy specific constraints like compiler’s version, specific memory constraints for JVM, patch dependencies, etc.

In order to get buildpack created for  Microsoft .Net Core Runtime 3.1 on XSA 2.0 (HANA 2.0 SP4), you should implement the following steps:

All these steps described above you can follow by watching the video below.

You can download the buildpack to run .NET Core Runtime 3.1 for XSA using the link.

All buildpack concepts are well described on CF website and can be found here.

Below you can find an example of sources for XSA buildpack to run .NET Core Runtime 3.1.

Source code for the compile script>>

Current CF version does not use compile script, it was replaced by finalize and supply.

In total you should have the following folder structure for buildpack:

How to protect applications running by XSA against memory leaks?

Which options do exist to minimize system downtime due to  application crash caused by memory leaks ? Linux OS supports mechanism called Control Groups (Cgroups) which represents powerful and convenient way to define memory and cpu resource constraints for any application.

It is important to note that Cgroups is part of the Linux kernel and requires root privileges to be executed. Standard Linux user requires sudo access rights to use Cgroups directly. Also Cgroups are widely implemented by systemd, which provides the easiest way to control resource limits.

Anyway we decided to have implemented Cgroups directly, a working example of script “start.sh” that runs by buildpack for .NET Core 3.1 shown below:

The following example of manifest.yaml given below contains two parameters: “MemoryLimitInMB” and “CGNAME”, where CGNAME stands for Linux control group name and MemoryLimitInMB stands for upper memory limit constraint for the application.

Basically the start.sh helper script is just an example on how to set up memory usage constraints for your application and minimize system downtime due to application crash caused by memory leaks.

We hope that this blog post was helpful for understanding how to create buildpacks for XSA and apply it in real-life scenarios.

I was looking for such a doc on help portal, and I landed a page where it was clearly mentioned no other runtimes supported. It would meant for support services and technically it is possible to bring other runtimes. I will try with v5 of dotnet. Thanks for the blog post.

Yes, we support BYOL(bring your own language) principle.

I will prepare the next article for .net ado client library for Linux, since it is appeared just recently since HANA 2.0 SP5, it brings many benefits for .NET developers.