While startling and confound at the same time, my last SAP Cloud Integration projects revealed me one important thing – that we need to focus more on integration testing. Therefore, I took it as a personal challenge to design and put in place in two months a solution that can help building but also running SAP CPI tests. Postman is a very popular platform used by more than 11 million developers so after investing some time analyzing the included API testing automation features at its true potential, cleanCPI was born. This is my opportunity to get back to the SAP Community some insides about the first result. 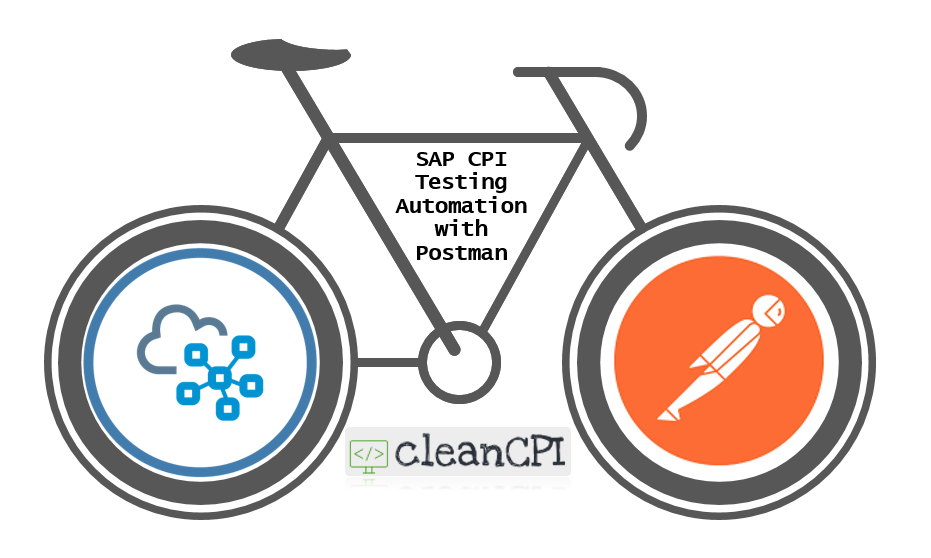 CleanCPI is a package tool that supports running cloud integration in an SAP environment. It is a multi-feature tool focusing around areas like testing automation, cloud EDI, CPI documentation, though we will concentrate now on presenting the testing automation feature.

The goal of the testing feature is to concentrate the testing process on SAP CPI by isolating the testing process and having the option to exclude the 3rd party systems in any regression testing performed during the project. For this we are using a demonstrated method (by SAP and other companies) similar with what Rotoscoping is for visual design: “use to trace over motion picture footage, frame by frame, to produce realistic action”. In the same way our testing tool is working – we select the execution runs that were validated as an end-to-end process, extract the trace data behind those executions and generate different test cases having the same or a changed context depending on each test scenario. Data used by the tool is stored inside the MongoDB collections:

A project can be a new CPI implementation, a migration from PI/PO to CPI or just an internal integration project. Postman API key is one important attribute maintained at the project level as this should be available for all the tenants inside the project.

CPI tenants are represented inside the Tenant collection and consist of attributes like tenant URL, test dispatcher flow URL, connectivity details. All sensitive data including passwords are encrypted in the database collection.

Testing Scenarios are created for each CPI flows that will to be tested and include all the attributes required to read the CPI payloads and to generate the Postman requests.

For user authentication and authorization we are using the passport and passport-local node modules and a User collection in MongoDB where the user data is stored. For now only admin and non-admin users are handled.

Create and synchronize Postman environments for each tenant

Test cases created from one tenant source can be executed on any other tenant just by switching the environment in Postman (and of course having the CPI testing package configured in advance for that tenant). For each tenant defined in cleanCPI an environment can be created and sync with Postman. This option is included in the tenant detailed view.

Test cases in cleanCPI are created based on prior completed runs. Extracting the data from old runs can be done in two modes, depending on scenario definition:

Each test mode has different use cases, depending on the integration flow particularity. Trace Mode is easier to implement for already existing flow definitions – even SAP standard flows,
Persist Mode on the other hand uses some additional logic included in the flow definition to enable extended testing options.

Creating the test cases is the ultimate goal of the web component. For one particular test scenario and based on completed execution runs, test cases are created as Postman requests and include details like request payload, headers, endpoint and of most important – test scripts.

Evaluating expected outbound is done in two modes, depending on the Inbound Adapter of the tested flow – HTTP or non-HTTP. 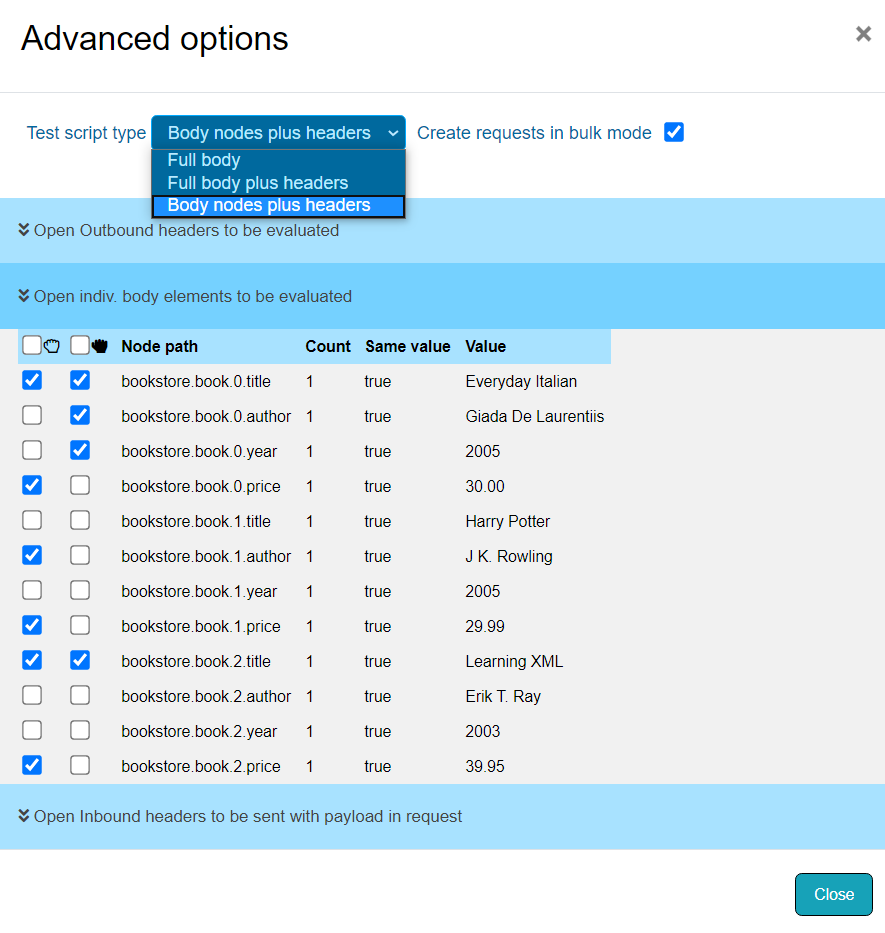 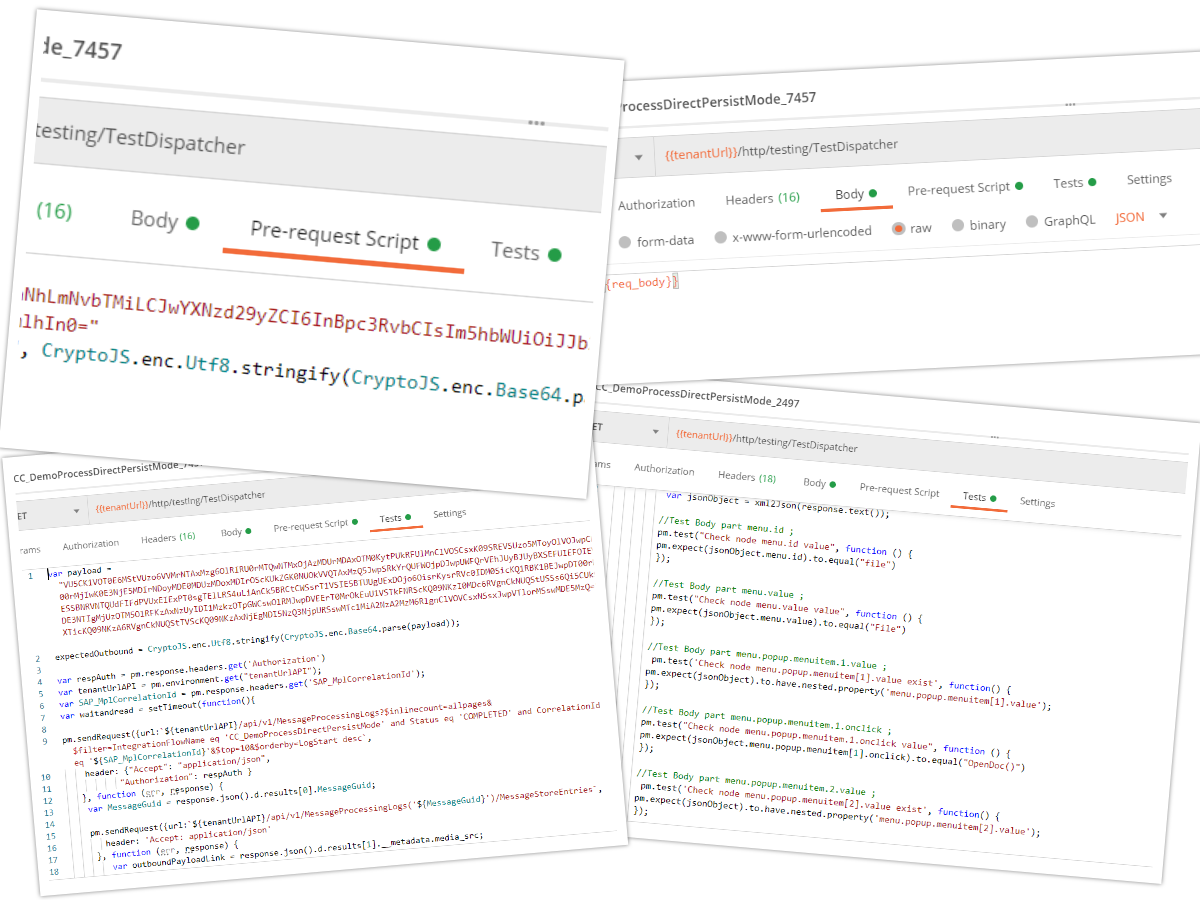 Test cases are generated by calling an API created on the web tool backend component. This gives the flexibility of consuming the API in a secure way from any other system. One important feature is the option of calling the create request API directly from the running flow and generating the test case automatically. For this, a specific configuration needs to be activated first in the tested flow that will call a Process Direct flow that includes the logic required to auto create the test case in Postman.

As part of the web tool, we included a resource page synchronized online with a AWS S3 bucket where content like best practices, SAP CPI packages, documents will be posted or updated. SAP CPI packages will have the option to be downloaded directly into the tenants configured in the tool. This will allow us to send updates to our tool as soon as we will develop new versions or features.

For working with testing in trace mode, enabling the iflow trace level should be an easy task for the testers. The web component includes the option of activating the trace level directly from the scenario. Also, mostly for developers I created a local tool to automatically enable the work in trace mode for more than 10 minutes, depending on specific scenario. This is very nice option when working on test cases with different teams and not being able to fit in the standard 10 minutes window.

What is included in the package

CleanCPI is delivered as a bundle that includes:

The tool can run fully on cloud or in a hybrid landscape and is not dependent on any SAP existing backend solution. Deployment options come into picture for the web component that can run on a local server, on SAP Cloud Platform or on any other cloud provider platform. All the web tool components are Docker containerized and any deployment can be done in minutes (e.g. SAP Cloud Platform Cloud Foundry). Also, a GitHub repository is available for any other custom deployment.

As the tool is already deployed and live on some of our clients, we will concentrate now on refining and extending the testing scenarios with new integration patterns. Also, we will extend the tests results UI from Postman by using the visualizer option and preparing a custom Newman Reporter. The auto create test case mode is a feature that can potentially raise the tool adoption, so in regard to this, two updates are on my bucket:  As the current API in built in Node.js, we will add the option of running this as FaaS on SAP Cloud Platform as an event consumer, and from SAP CPI this part will be called asynchronously by integrating with the Enterprise Messaging service. Also, expectation is that the tool will play new roles when SAP will release the persistence option on the SAP CPI simulation mode. For now, let’s just start testing. 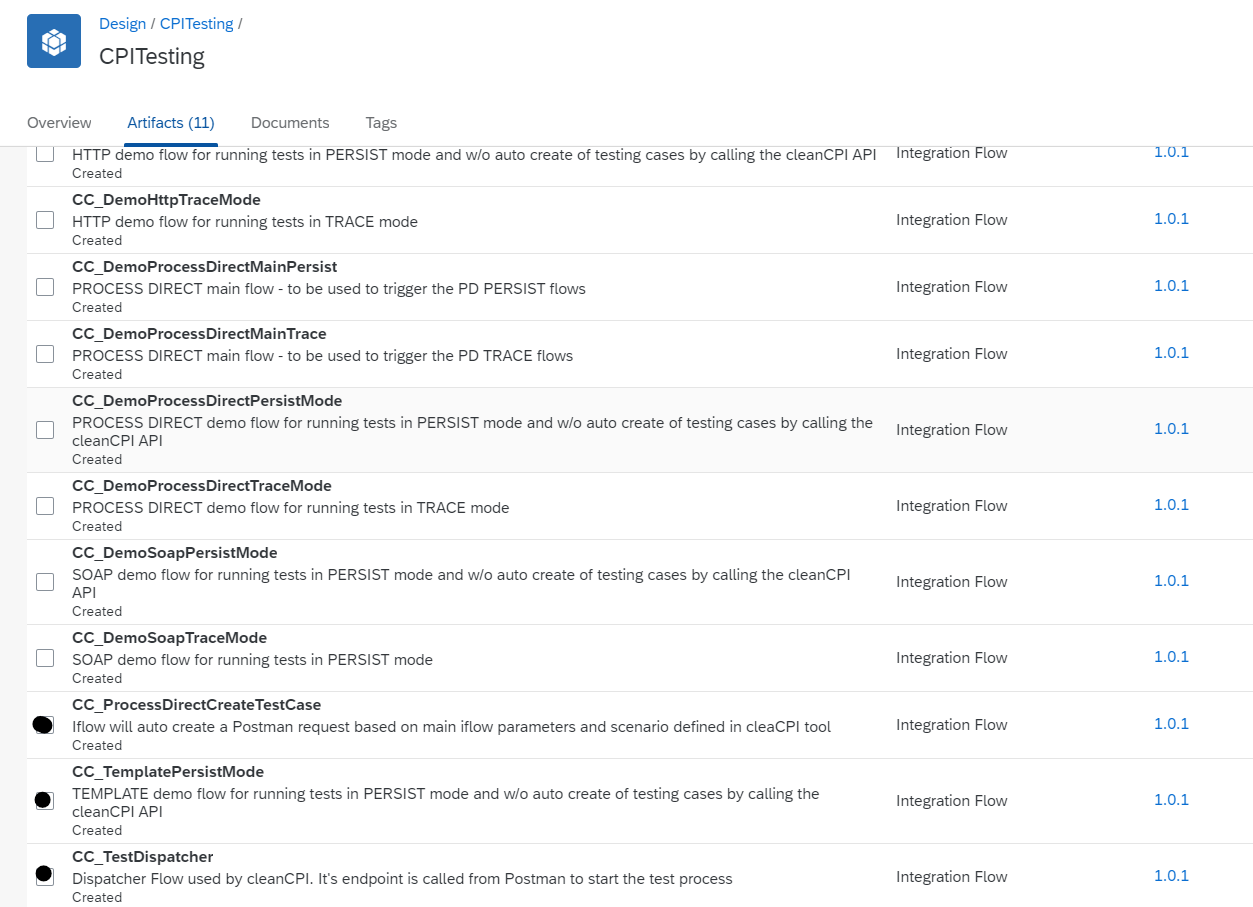 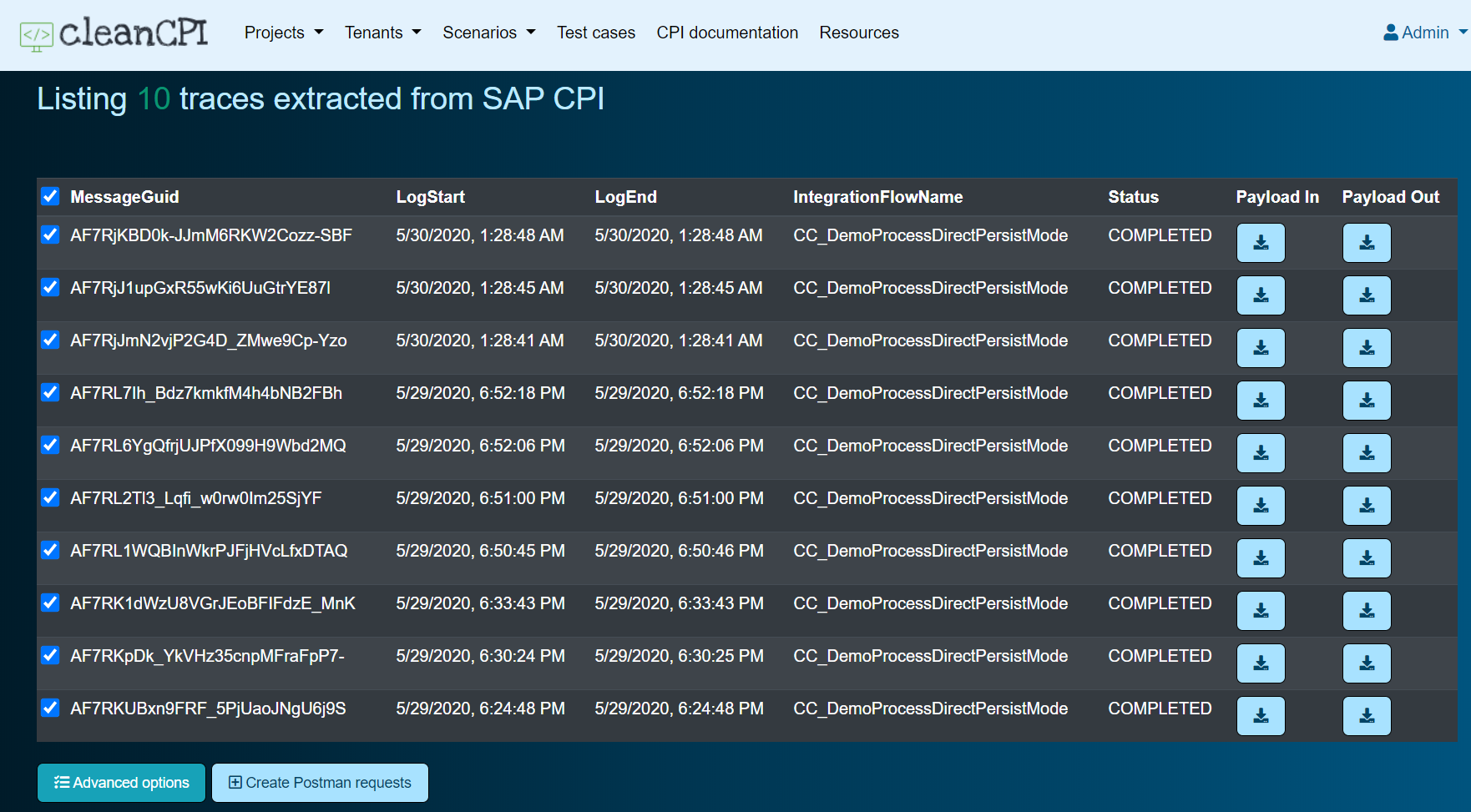 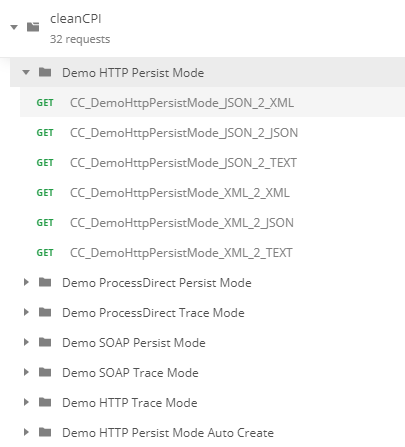 Thanks for sharing this detailed and "clean" blog post. It explains the value proposition and technical details for the tool very well.

It is good to see more options for CPI testing from the community. I would love to try it out!

Thank you, Fatih, for your feedback!

Is this a community version that can be downloaded or Where can I finding pricing for the tool.

Thank you, Gov for your comment. For this first version, we did not released the tool to the community, but we will reconsider this later. For now we are deploying it to our existing cloud integration projects as our own added value solution.

Good tool.Is this tool will come as prepackaged content.

Thank you, Syam for your appreciation. The tool is not yet publicly available, for now it will be deployed as a prepackaged content for our existing or new clients.

Looks interesting! Would like to test different i-flows using this tool. Could you please let us know when will it be available for download.

I also work on automation testing blog post and here I prepare something, please visit here:  How to Automate QA Testing Using Selenium WebDriver and let me know what do you think