In this blog post, I would like to share the four process bots from Data Management for the SAP S/4HANA customers, especially those customers who are introducing new products at a higher frequency, by creating multiple semi-finished or finished products in one setting. SAP Intelligent Robotic Process Automation with SAP S/4HANA delivers the predefined bot content which can be used by customers to realize the automation of business scenarios.

Users can download the SAP S/4HANA pre-built bot content via the SAP Intelligent RPA Store. You can directly download and deploy them to your tenant. More information to get the package and deploy to your tenant refer the below blogs:

When a newly manufactured product is introduced, it requires the creation of Product, Bill of Material, Routing/ Master Recipe, and Production version master data in sequence before a production proposal or production order be created in the system. The Production controller who is responsible for creating/managing production master data can get benefit by trigger the below four mentioned process bots: –

This bot is used to create product master data for the new material using reference from existing material.

This bot is used to create a bill of materials master data for the new material using reference from an existing material’s BOM details.

This bot is used to create Routing data for the new material using reference from an existing material’s routing details.

The process bot starts with selecting an existing reference semi-finished or finished material with a similar composition (BOM) and process steps (Routing/ Master Recipe) to the newly introduced material.

Thus, the above four repetitive steps can form as a guided skill for the creation of relevant production master without the risk of missing any step for the creation of product master data with a reference that can be free to error-prone and not time-consuming.

Every Bot package holds a set of files (Test Script, Sample input template, and configuration guide) that helps users to understand the available artifacts and how it can be executed.

Desktop package enabled with skill as shown below can be directly deployed to the tenant and the user can consume the bot connecting to the SAP S/4HANA system as stated in the test script file in the bot package.

Desktop Project Archive contains the Source code, which can be downloaded and using the SAP Intelligent RPA Desktop Studio for testing and customization.

The Production Master Data with Reference bots explained in this blog post will help the Production controller to enable faster creation of the master data with reference in an efficient way and increase the operational efficiency by reducing the manual effort.

More Information about the SAP S/4HANA template bots, check out the following links: 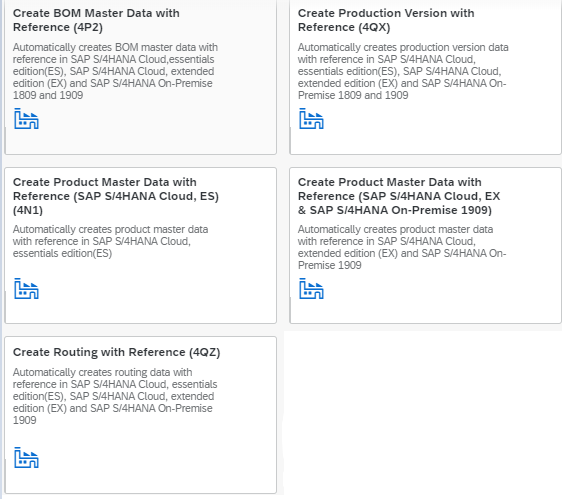 What if we have some custom fields?

Hi Piyush, thanks great question. You can use the SAP Intelligent RPA Desktop Studio to extend the bot's source code there using Javascript to include new custom fields. You can also take a look at the Product Master (A2X) API for which fields could also be included.

The current package available in the SAP Intelligent RPA store with scope id (4N1, 4P2,4QZ, 4QX)  has the option to extend the bot for custom fields by just adding new columns in the input excel and providing the technical name of the field in the excel column header without any code changes, the bot will take the additional columns added in the excel.