On Machine Learning Without Location Data 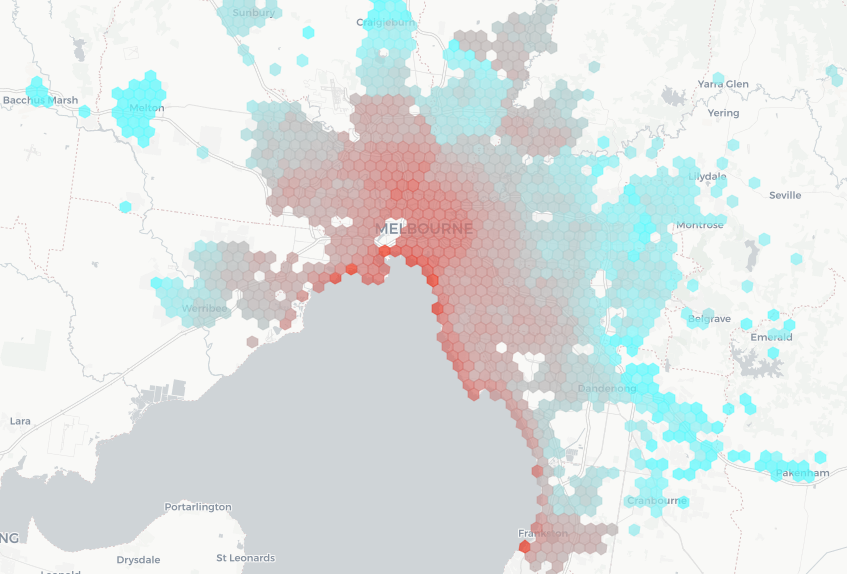 This blog is about analyzing the same dataset with and without considering the location dimension in order to quantify the benefit of handling spatial data.

Well, the title is a trap. Actually this blog is all about using location data in machine learning models. However, instead of preaching that the location dimension is equally important as time, I would like to show you an end-to-end example of analyzing the same dataset with and without location information. Eventually, we will compare two trained ML models and will quantify the impact of location information on our prediction quality.

So, cards on the table! This time it’s not just preaching!

Along the same lines, you will find the full Jupyter Notebook to replicate the example on my GitHub Repository. By going into the details, you will learn how to

Also, I will use some brand new features of SAP HANA Spatial, which have been introduced with HANA Cloud and HANA2 SPS05. Following features are covered by the example:

The dataset for this example can be downloaded on Kaggle. It contains almost 35000 housing sales from years 2016, 2017 and 2018 in the City of Melbourne, Australia. Unfortunately only 27000 are geo-referenced with proper longitude and latitude information. Our analysis will be based upon those 27000 records.

In the initial dataset there are already a few columns included, which act as a proxy for geographic location information. These are suburb, address, distance (to city center), postcode, councilarea, regionname and propertycount (within the neighbourhood). We dismiss all those columns to train a model which is solely relying on the attributes of the house itself. Afterwards we will use only latitude and longitude information to generate similar (or even better) spatial features on a database level. 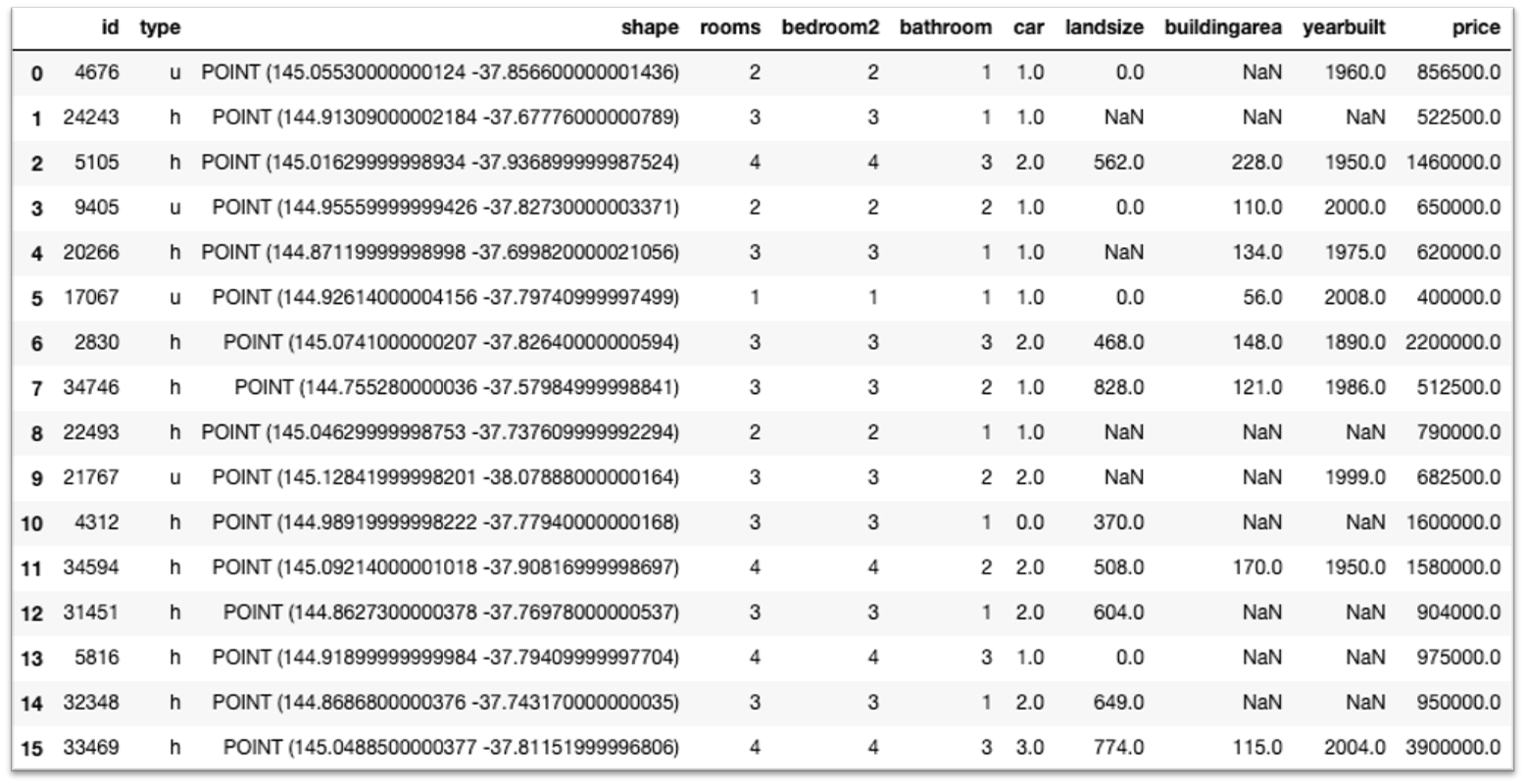 These are the features, that we will consider in the following:

Our database representation of latitude and longitude will be a column of type ST_GEOMETRY(28355). SRS 28355 is a planar spatial reference system, which is suitable for Australia. This SRS is not installed per default on SAP HANA. However, with the latest release, the database already knows the definition of the SRS and we simply need to issue the following statement to make it usable:

With this new feature, prior approaches such as the metadata installer tool or the creation of spatial reference systems by its definition got obsolete for EPSG Spatial Reference Systems. The units of measure, which are used by the predefined SRS, also come out of the box. No need to install them separately.

(Note that it is still possible to create spatial reference systems by its definition. It is just not required, when using the predefined SRS)

As a reference, we will first train an XGBoost regression model for the price incorporating the features listed above (except field shape, of course). To explain the model and understand the impact of features/attributes on the price, we leverage the SHAP library.

Still, let’s take a look at the model explanation by SHAP and the importance of features: 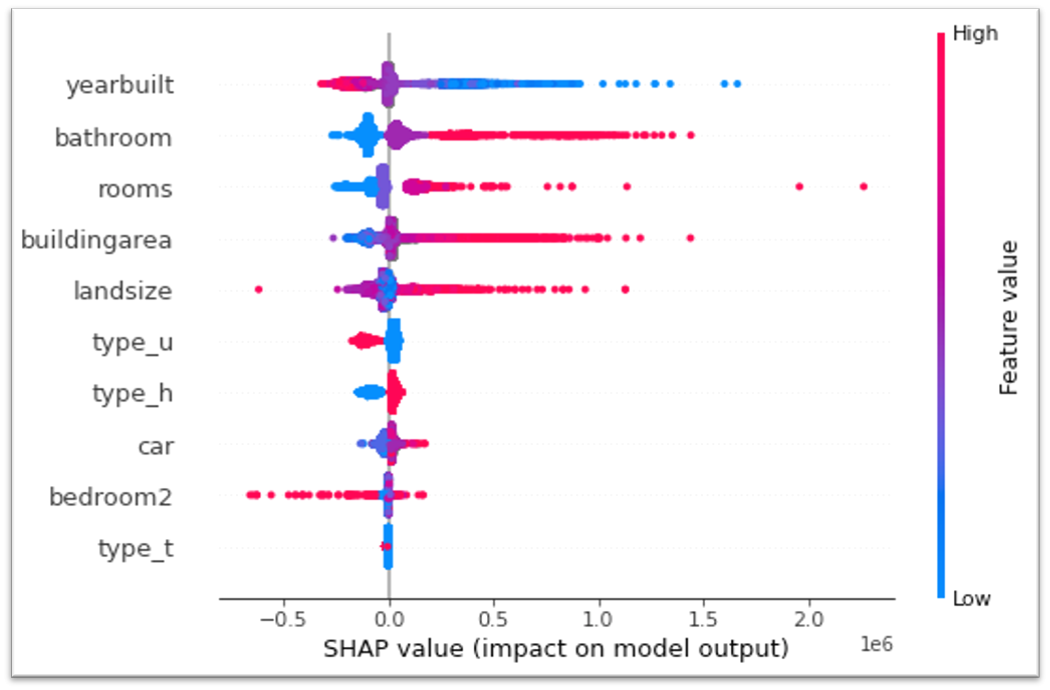 How do we read this graphic? The color corresponds to the value of the individual features. Red dots are records with a high value and blue dots records with a low value. The x axis describes the level on influence on the price (regression target). The vertical line at zero behaves ‘neutral’. The sorting of features corresponds to the importance for the model. This most important variable in this case is yearbuilt. Let’s look at two examples to make that clearer:

To understand the surroundings and nature of the different neighbourhoods, we first of all retrieve and upload poi data from OpenStreetMap using the OSMnx library. To determine the query range, we first check which area is covered by our dataset using ST_ConvexHullAggr. 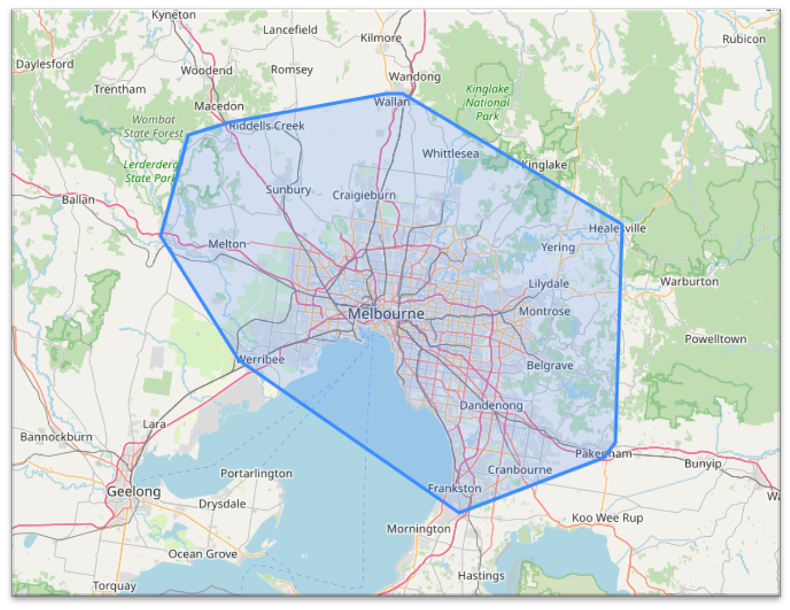 Convex hull of all records in the dataset

Within the polygon above, we search for pois with tags amenity, shop or airport. Based on the OSM attributes, we categorize the pois into following types: entertainment, health, education, childcare, community, emergency, grocery, shopping, airport.

Overall we downloaded 50000 pois and selected around 15000, which we found relevant based on the categorization above. We can use mapping plugins, like Folium, to create heatmaps for different poi types. 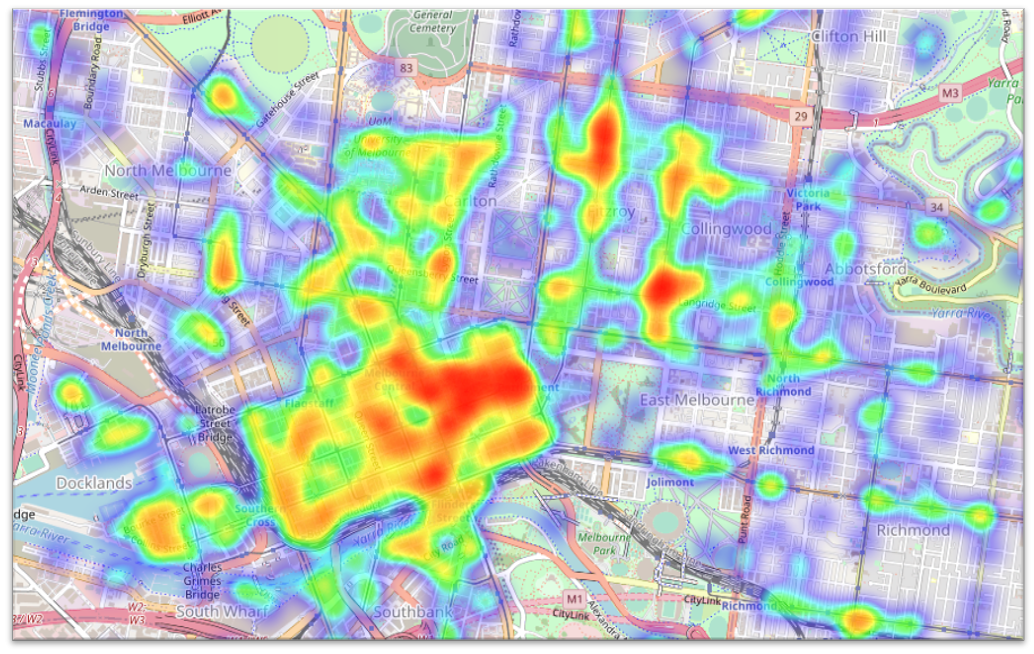 Based on the poi data, we generate a bunch of features, which describes the distance of each house to the next poi of a given type as well as the density of pois around the listing.

We can use the following SQL view to efficiently query the next poi of a given type.

For counting the POIs of a certain type within a given distance (e.g. 1000 meter) around a listing, we use the following SQL view.

In our initial dataset we dropped columns, such as suburb, which is a geo-spatial identifier for a region. However, a suburb or district has a political or administrative dimension. The area covered may change over time. On the other hand each of us knows, that this is important information for housing prices. There are simply expensive districts, where we sometimes may get the impression of paying for an address rather than a house.

We want to avoid this administrative dimension and chose a data-driven approach to infer regions from the data. In similar examples, I have used hexagonal clustering and used the individual cells as a proxy for a neighbourhood. This time I want to limit the number of regions and at the same time infer a meaningful clustering based on the density of listings.

The following SQL view is used to generate 30 k-means clusters and the Voronoi cells of their centroids. Each area/cell is given a name containing a simple ID (REGION-xx). 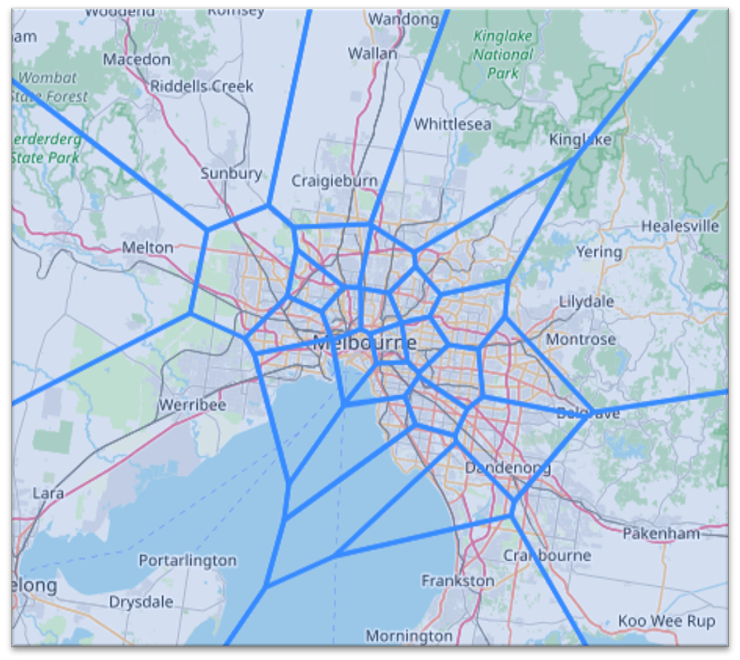 30 regions based on k-means clustering

In each city there are certain areas of interest, where the proximity to those areas influences the housing price. For the Melbourne example, we want to use two ‘areas’: 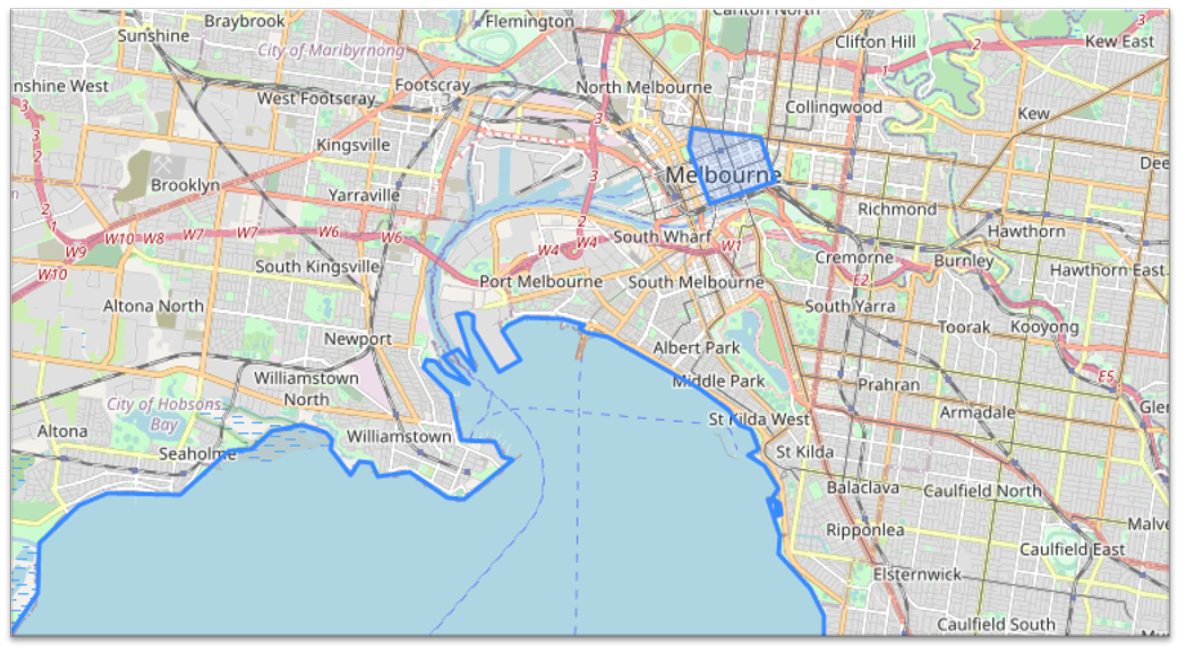 CBD and Coastline as Polygon/Linestring

The CBD is in the very center of the city. It is itself a large area. If we would measure proximity only to a point in the center of the city, we would run into the risk of not correctly reflecting, that the “center” of a city is usually not a point, but a larger area. For this reason we calculate the closest distance from each house to the CBD polygon – and the coastline as well, as this is certainly a driver for housing prices – by using ST_Distance with polygons (CBD) and linestrings (Coastline).

The coastline is a linestring with a rather high precision. To measure the proximity of a house to the bay, it will be sufficient to reduce the number of points of the linestring while preserving the characteristic. We can use ST_Simplify to do so. The parameter determines, that the new (reduced) coastline should not deviate more than 100 meter from the original one.

Now let’s bring all the non-spatial and spatial features together, to see if we can improve our housing price prediction, that we conducted earlier. We added following geo-spatial features: 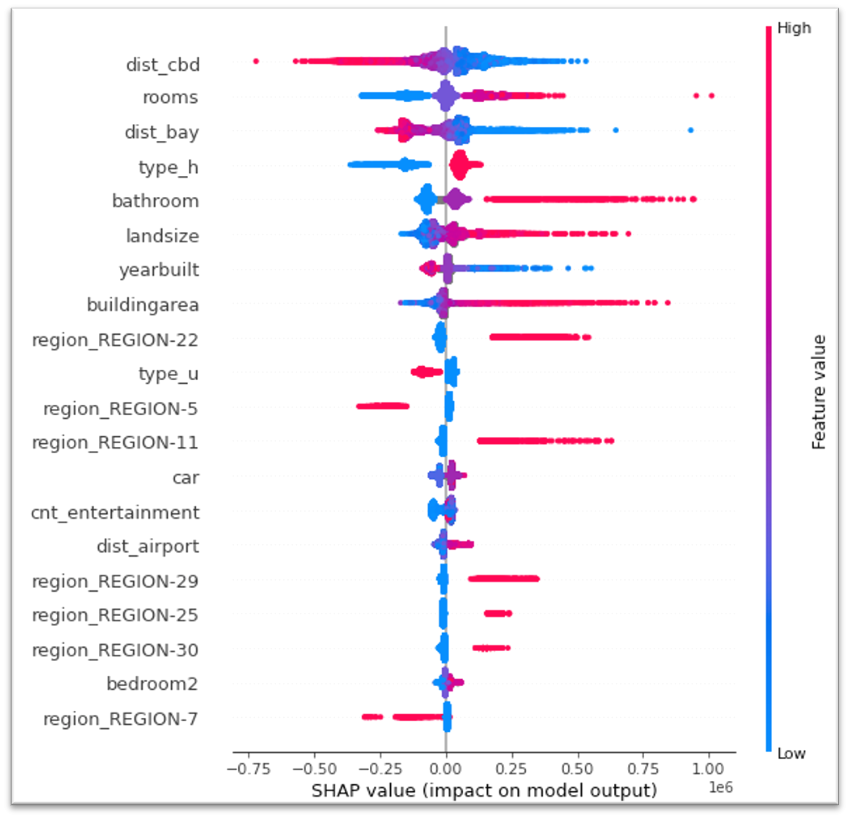 Impact of spatial and non-spatial features

The impact of spatial features:

Well, that’s easy. Let’s get the numbers mentioned above into one table.

Bottom line: The enhancement with spatial features significantly improved the precision and robustness of our model.

Was this surprising? By no means! Think of what would happen, if your ML model or reporting ignores the time dimension for temporal data. Eventually your results would be useless… The same happen when dealing with data, that carries a spatial dimension.

Predicting the Price of a Reference House

However, having the right model at hand, we could now be curious, what the isolated impact of the spatial dimension on the housing price is.

Given the exact same house in different areas of the city. How would the price differ?

Before we all go to bed or continue working – let’s answer this very last question. By looking at the base data we can construct the “average house”.

With this view we spanned a grid of 75 hexagonal cells in x direction across the city. We can use the records above to do a prediction for the centroid of each cell. For the data at hand, that are 1301 price predictions for the exact same house at different locations.

We can use the hexagonal cell of the prediction centroid to visualize the distribution across the city. Since we use the same data preparation as before, it considers all our spatial features (pois, area of interest and regions) while fixing the non-spatial features to static values. 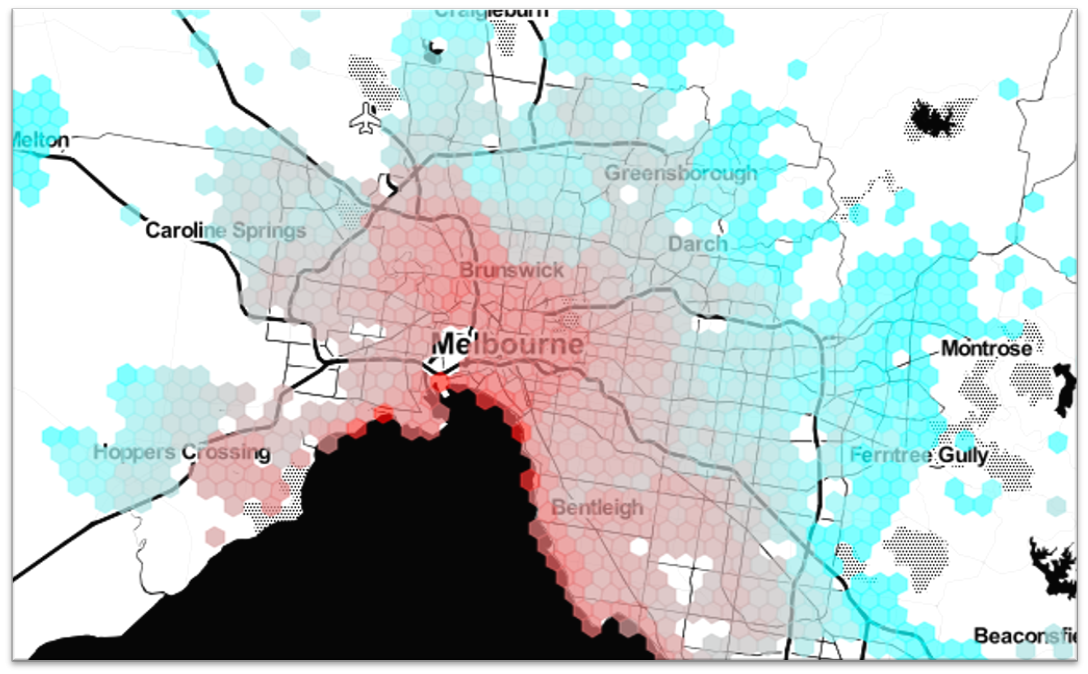 In-line with what we have identified during model debriefing, we see hotspots in the center of the city as well as on the coastline. We are also able to see expensive regions, which are neither close to the city nor to the coastline. Depending on the location the price for our 160sqm house varies between 330k Australian Dollar and 2.5m Australian Dollar.

If we go down the coastline to the very south, we will see a cell, where our reference house is worth 1.9 million Australian Dollar. 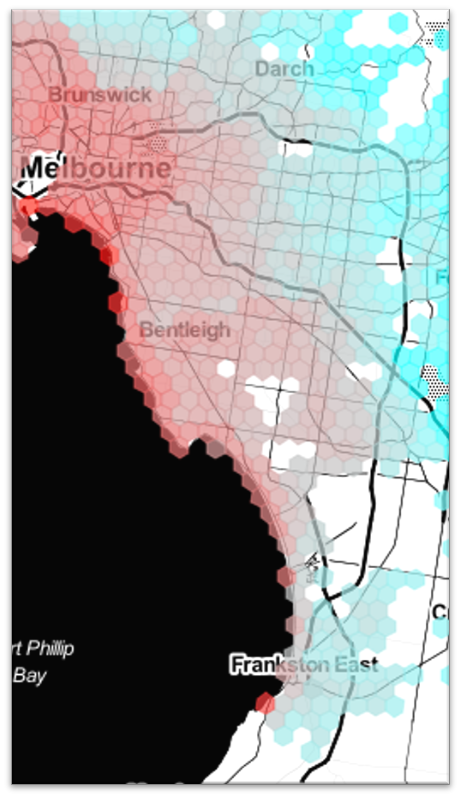 I leave it up to you to check the satellite imagery, if this makes sense…. I did for sure.

In case anybody else stumbles over this: To get osmnx installed on my Mac, I had to install libspatialindex first. I used homebrew for this: brew install spatialindex