In the intro blog, I explained how the spread of COVID-19 impacts the ability of businesses across the world to plan and predict their future.

I want to cover through concrete examples how these scenarios can be handled today in SAP Analytics Cloud.

For today’s episode, I’ll start with the scenario corresponding to the minor impact.

Here is a quick memory refresh on this scenario.

In this scenario, after a few months, business resumes somehow “as usual”, and impact remains limited to a well-identified period, like it is illustrated in this chart.

The assumption that this “new normal” corresponds to the likely evolution of the previous conditions must be checked thoroughly.

The best practice recommended here consists in filtering out the months or quarters corresponding to the impacted period when creating the time series models.

If we assume that a company’s business is impacted in Q2 and Q3 2020, the corresponding months or quarters will need to be removed from the underlying data foundation used to create the predictive model. In this example, Q4 2020 would be predicted based on a data history ending in Q1 2020.

In the next section of this blog I’ll present how you can do this today in SAP Analytics Cloud – using either Smart Predict. In a upcoming blog a similar example scenario will be covered for the time series forecasting capabilities that are being offered in charts.

The data source I use as the example is related to the evolution of domestic passenger enplanements in the United States from January 1996 up to February 2020.

Please note that the scale of the forecasted number (passenger enplanements) is in million per year. 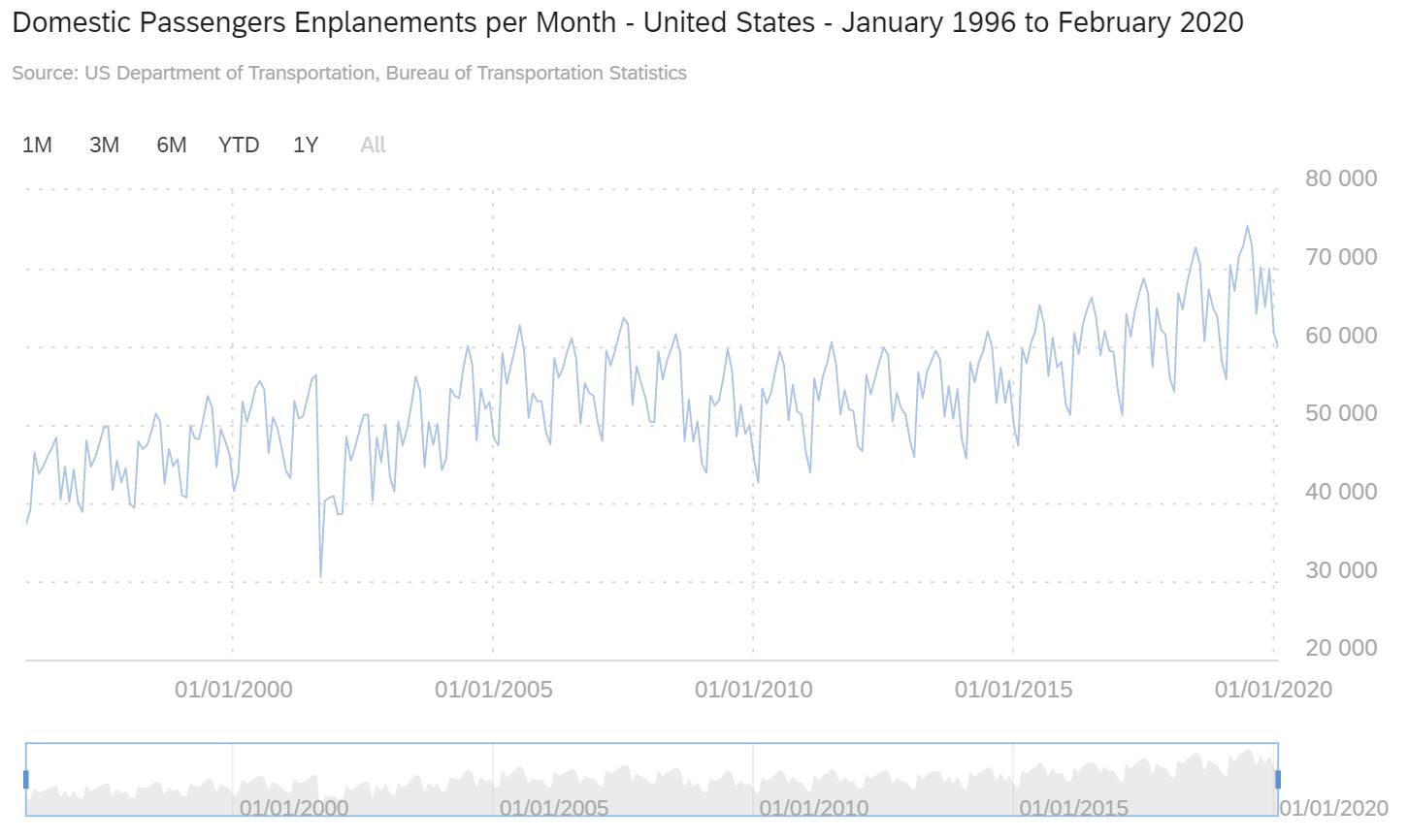 As you can see, during the last third of the year 2001 and the whole year 2002 there was a drop of passenger enplanements due to the 9/11 terrorist attacks and the consequences to domestic passenger traffic in the subsequent months. 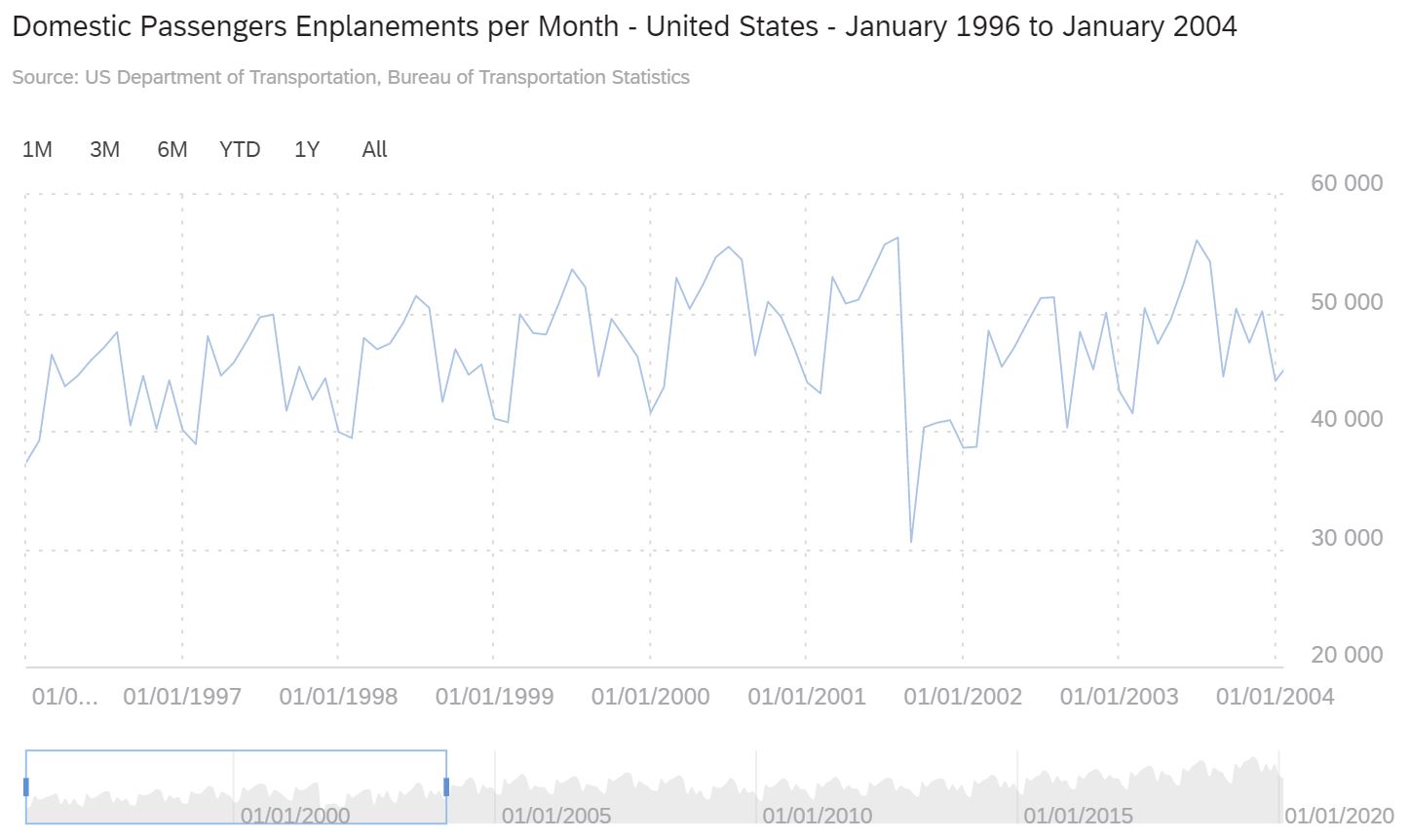 In line with what I described in the intro blog, the guidance consists in filtering out the data points corresponding to the disruption period.

In the first step, I start with a predictive scenario that represents my baseline.

I use my magical time travel machine. I travel back in time  at the end of year 2002 and I want to forecast the entire year 2003 at monthly level. 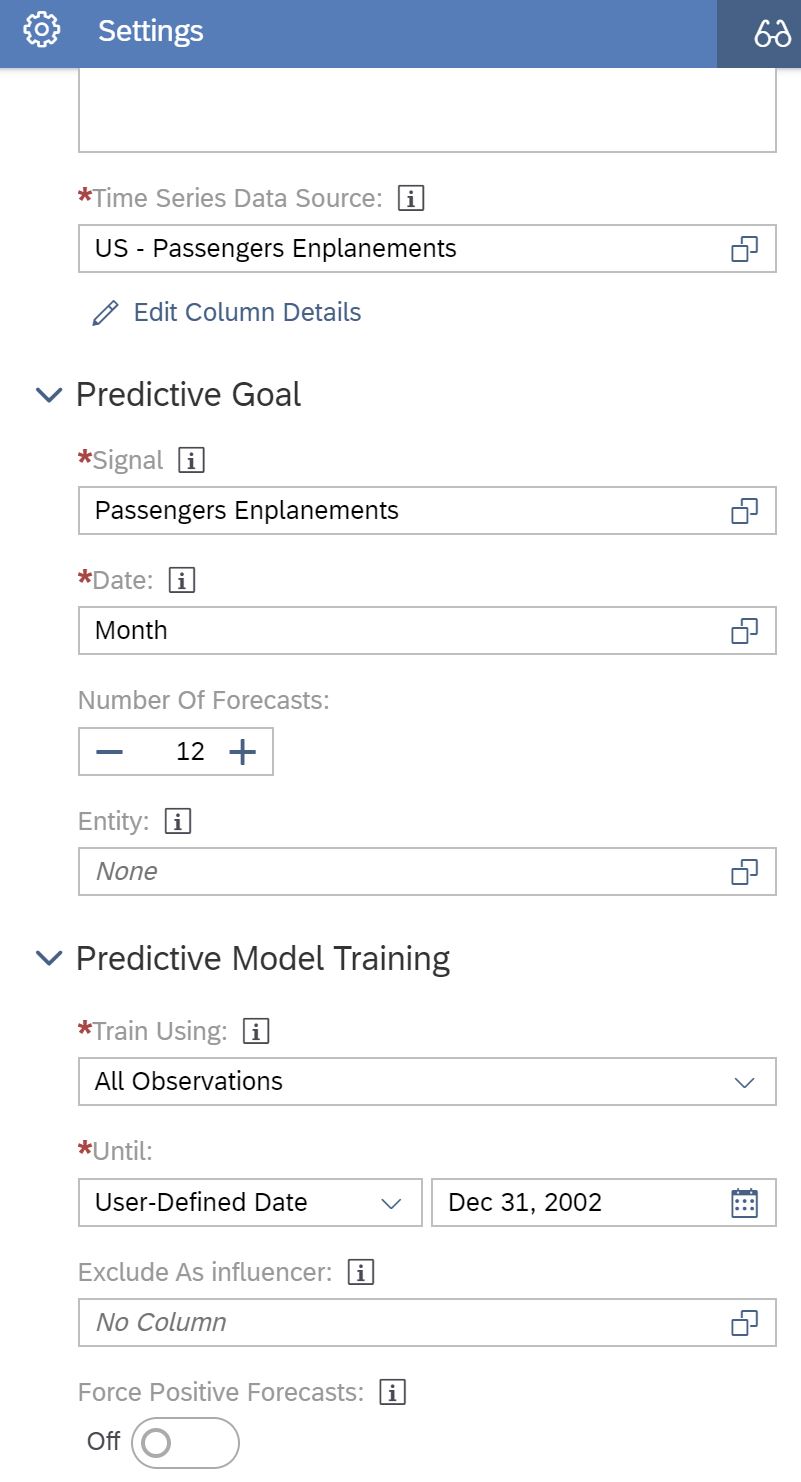 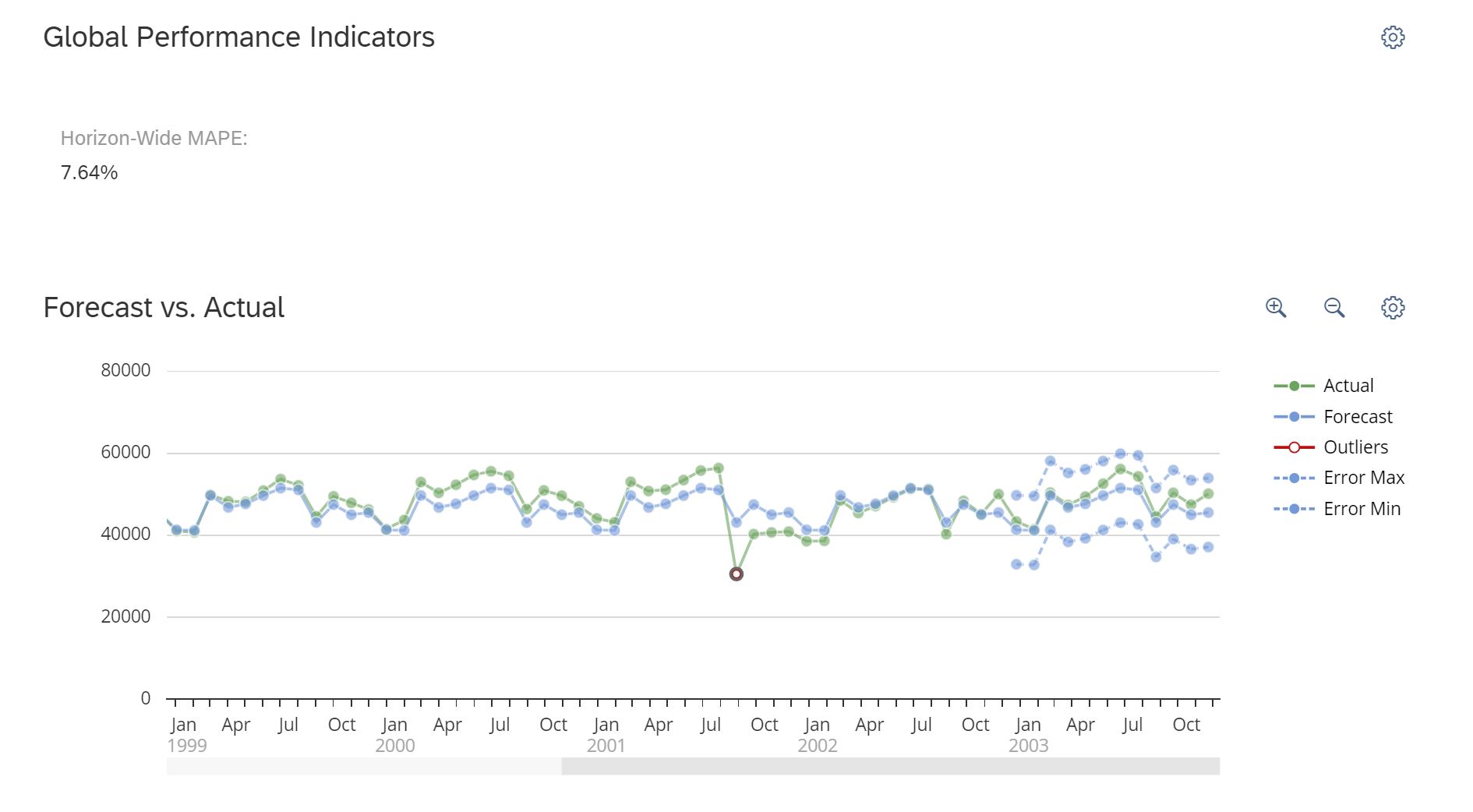 When looking to the time series models, I notice a few things:

I can go one step more and see how the signal was decomposed by Smart Predict into trend, cycles and fluctuations, using the Signal Decomposition representation.

The number of passenger enplanements is heavily influenced by the month of the year, enplanements are typically higher in July / August (summer travels) and lower in January / February.

The overall pattern is nicely captured by Smart Predict. Again it can be noticed that the Signal (actuals, green curve) behave quite differently in late 2001 and early 2002 (notice the drop in the green curve above).

I am provided with the predictive forecasts for 2003 and the detected outlier. The difference between what the predictive model forecasted for the month of September 2001 and what actually happened is a difference of 13 million enplanements (30,543 millions vs 43,122 millions). 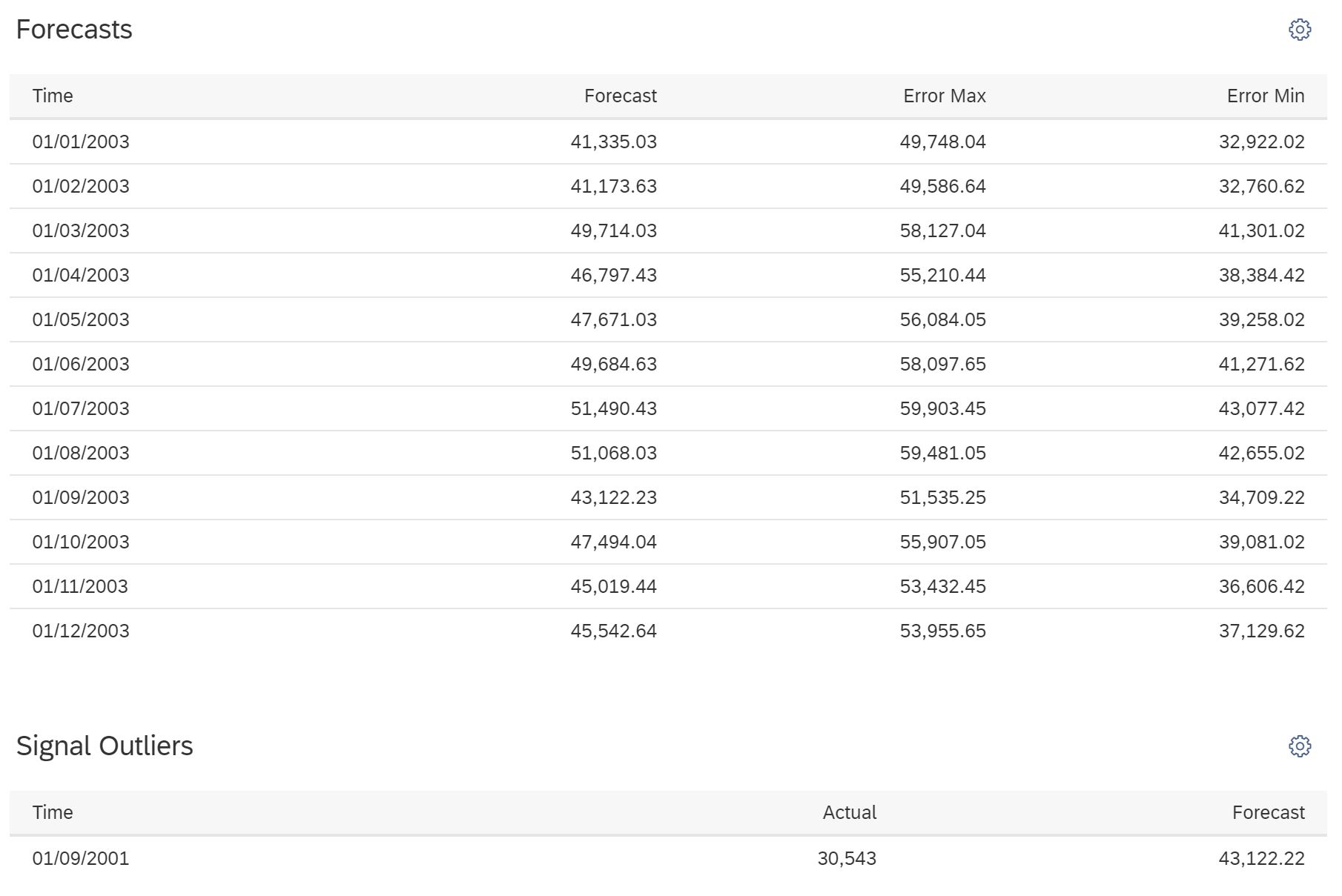 In few clicks I can create a story to report on actuals (in brown) compared to predictive forecasts (in green). I create a calculated measure which corresponds to the absolute difference between actuals and predictions (in red). I notice higher forecasting errors for the months of June, July, October and December 2003. What I want to do now is create a second time series model and see if filtering helps in reducing the forecasting errors. I want to filter out the values corresponding to the time range September 2001 to April 2002.

There are different ways for me to achieve data filtering. One way consists in modifying my base CSV file before I acquire it into SAP Analytics Cloud.

At the end of day I thought it was cool to give it a try to the new dataset wrangling capabilities that will be made available to our customers in the third quarterly release of SAP Analytics Cloud.

I exclude the specific months (dataset rows) I did not want Smart Predict to consider. As you can see below, the dataset values jumps from August 2001 to May 2002. 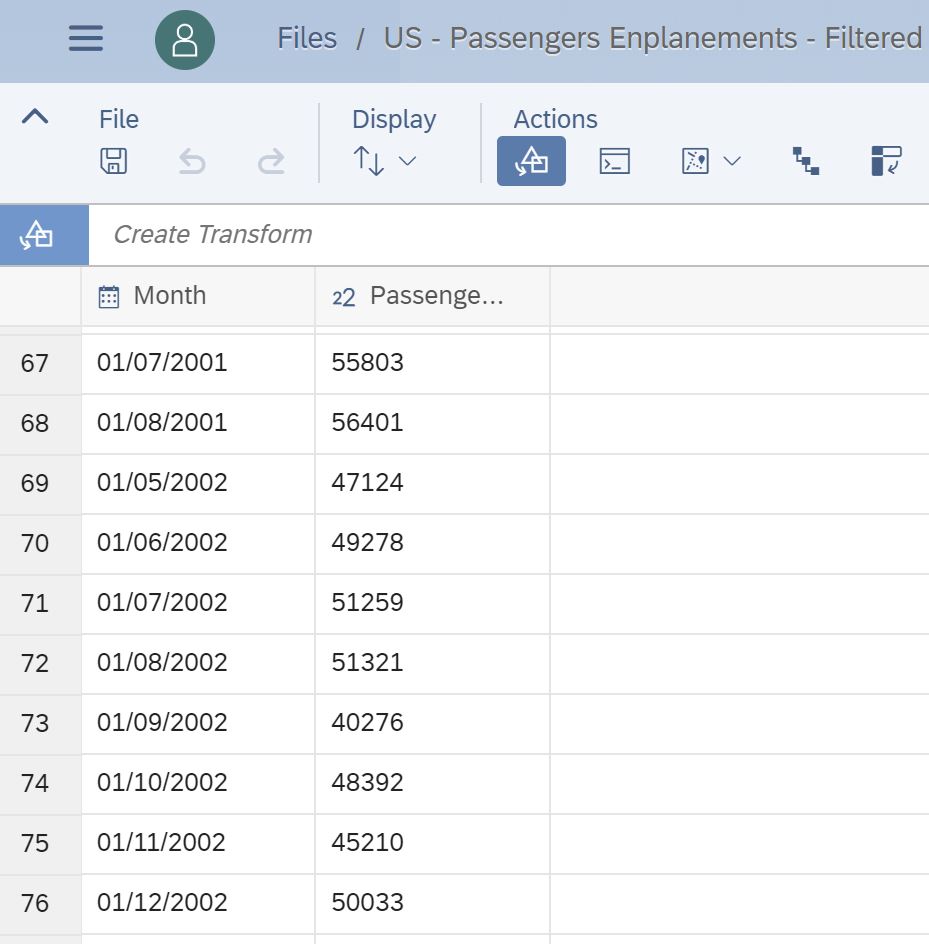 Once I have the filtered dataset at hand, generating the predictive forecasts is straightforward. I use similar settings as before, only the underlying data source is changed. 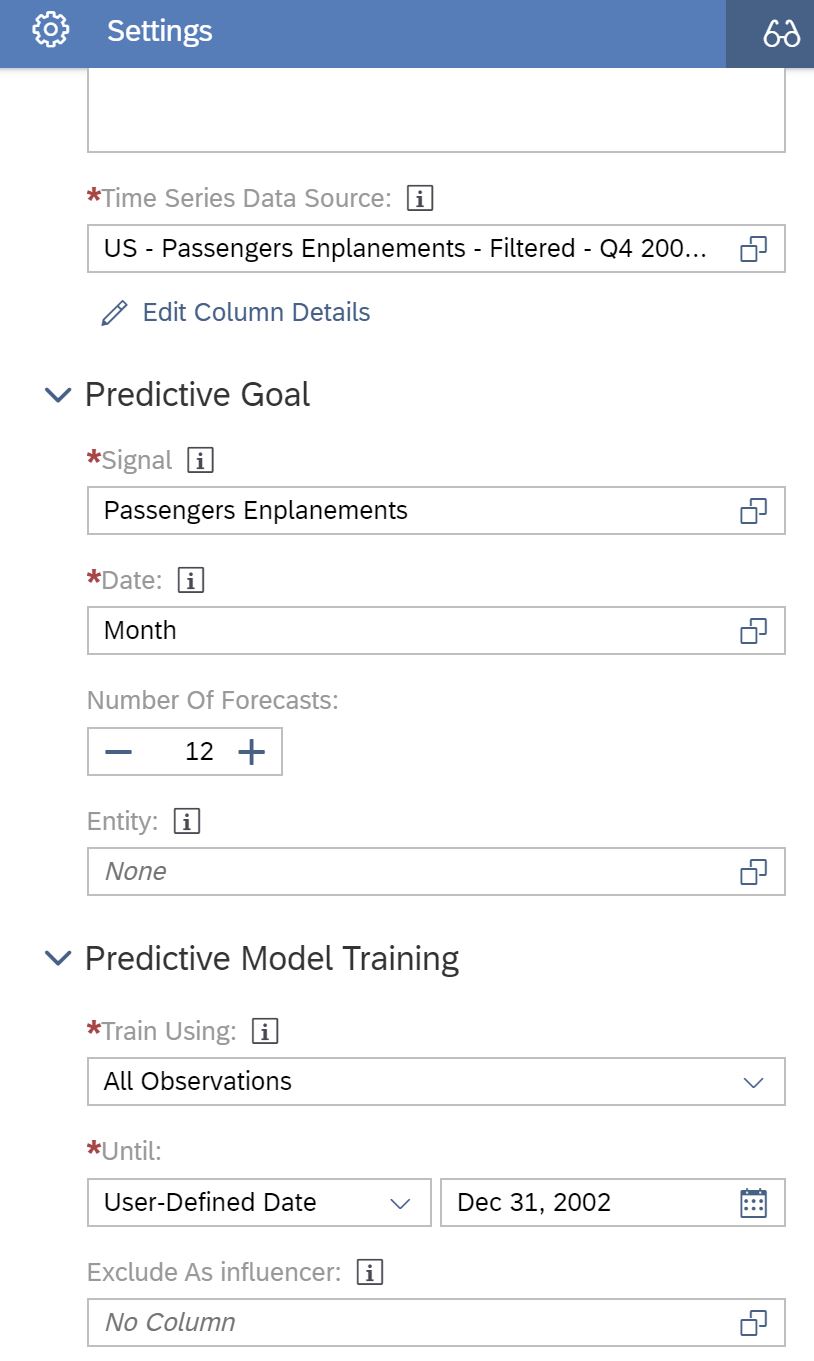 I can examine the new predictive model in the main Forecast page: 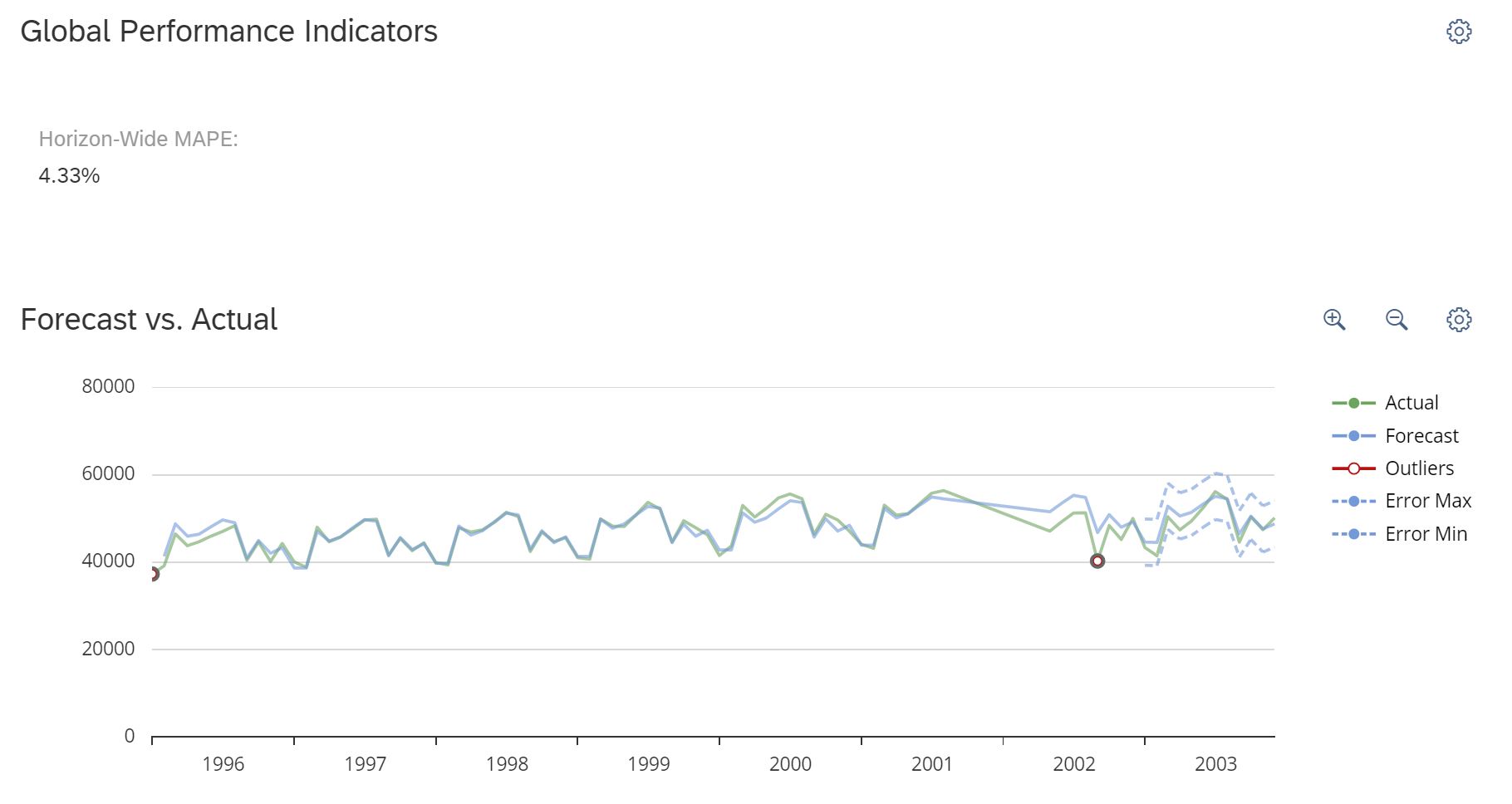 I want to understand what the time series model is about. Smart Predict offers a lot of transparency with that regards. A trend and a cycle have been detected – however the trend is no longer flat but rather increasing over time. The cycle is about a recurring pattern for the different months of the year.

I can report actuals, predictions and absolute difference between actuals and predictions in a story. 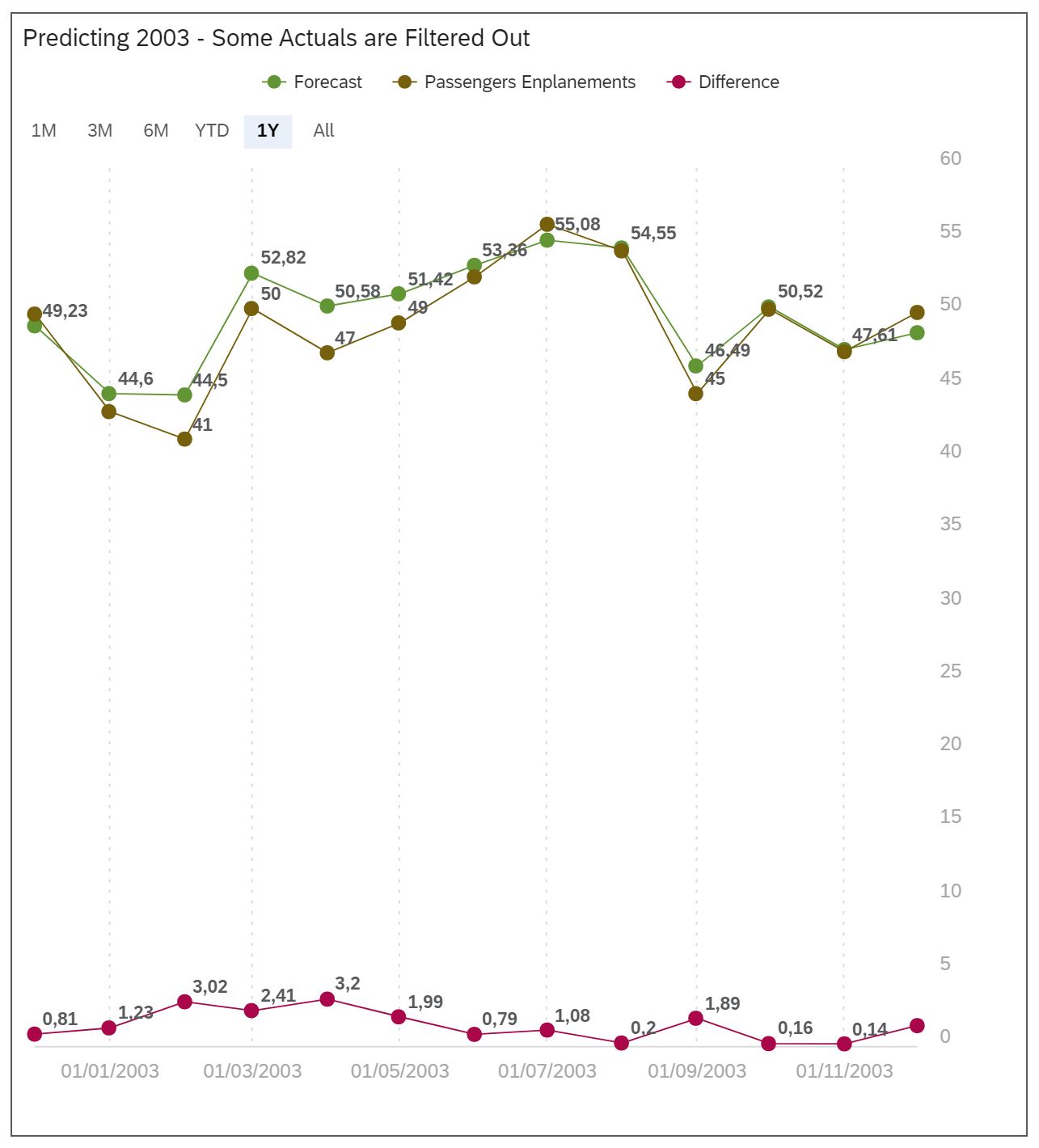 When summing up the forecasting errors for the period January to December 2003, the error made by the predictive model that is using unfiltered data compared to actuals is 27,5 million.

For the predictive model using filtered data and the same period the total forecasting error is 17,5 million.

The data filtering made it possible to eliminate 36% of the initial predictive model error!

Key Take-Away and Next Steps

My main goal with this blog is to illustrate based on a concrete example how to handle time series forecasting in a minor impact scenario – where after some point the business conditions are back to normal.

This guidance needs to be adapted to the specific operating conditions and evolution of businesses.

In the next blogs, I will explore the lasting & the major disruption scenarios. I am working on this, stay tuned!

You will be able to continue your read on the how-to approach for time series forecasting in charts soon.

Thanks for reading this blog, I hope you enjoyed it as much as I liked creating it!

Kudos to my colleagues Irene Chung, Flavia Moser & Yann le Biannic for their precious help with these how-to blog series.