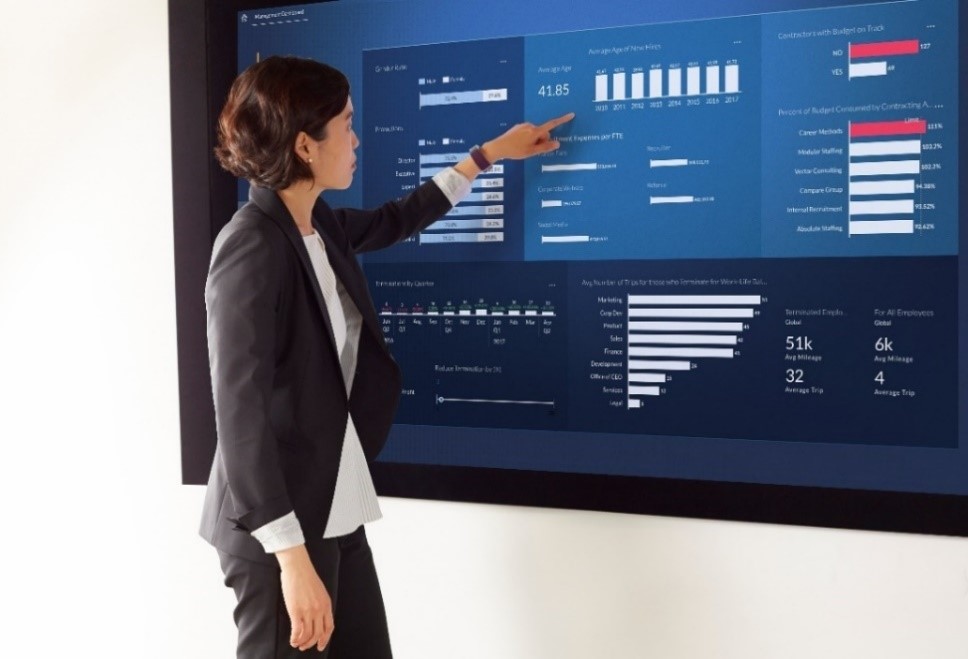 A few months ago, I wrote a blog to detail the steps to create a predictive model from time series data.

Through this blog, I will now explain how to create a classification predictive model. Classification is used to rank a population relatively to the probability that an event will happen. For example, who among my customers will react positively to my marketing campaign.

All businesses face questions about upcoming events for their customers, their industrial assets, or their marketing campaigns. Business life is made of events: churn/no churn, failure/no failure, sale/no sale, delay/on time to list the most common. That’s what classification do: associate to each entity of a population its probability that an event will happen.

Forecasting values over time is essential and allow to obtain an estimation of business value evolution. But it brings no information about individual behavior (what is the profile of the churners?). It may also happen that forecasts cannot be produced with time series forecasting algorithm. In this case, classification may be a solution to estimate the rate of a future event.

Which questions? Which data?

Smart Predict Classification is useful to answer to questions of this form:

“Who is likely to <event> next <period length>?”

To rank a population, the classification predictive model in Smart Predict generates an equation, which predicts the probability that an event happens. It can address today only binary cases. But before to dig into the details of a classification, check whether your data can be used to create a reliable predictive model.

As we saw it in this blog, the quality of data is important to build a reliable predictive model.  It is necessary to prepare the historical data that best represents your application domain and your predictive objective as it is used to build the classification predictive model. This means that you must:

Each of these variables must be unique in the dataset.

During the dataset preparation, it can be necessary to filter your data to discard those that will not help for your use case. For example, filtering customers who have already churned is necessary if you want to predict those who might churn! If you keep them, the population will be wrong, and the prediction will be wrong.

Among the variables available in your dataset, there is one which has a specific role: the target variable, which represents the event to be predicted. For example, in the churn detection use case, the target variable is the decision of the customer to churn or stay.

Use case: who could churn?

Let’s take a classic human use case to illustrate explanations of the next sections: A Human Resources manager would like to improve the HR policies in his/her company. The goals are:

Objectives which Smart Predict are:

The training dataset has 8000 rows and 43 variables to describe the employees. There are several variable types:

Fig 1: Dataset of the flight risk use case

To understand how Smart Predict generates a classification predictive model and what is the information given in the debrief, it is necessary to have some theoretical explanations. The purpose is not to give you a formal course, but to expose you the main principles.

The classification engine of Smart Predict relies fundamentally on Structural Risk Minimization (SRM) principle. You can refer to this definition and to this paper to get mathematical explanations.

The SRM principle is to find and to point out the best function able to reproduce the target behavior. 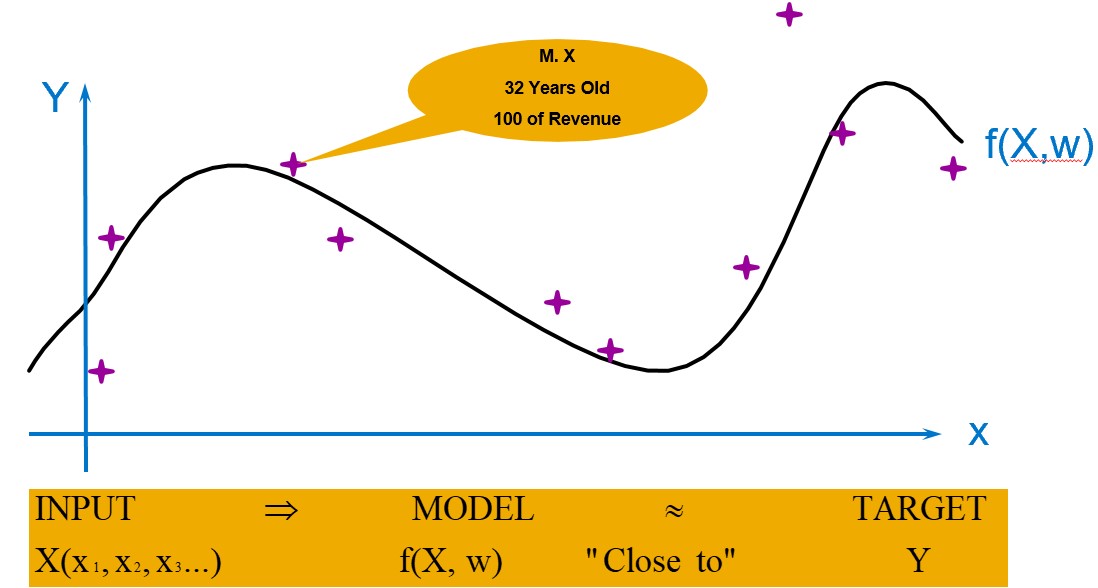 At the opposite, if the predictive model is too simple, it under fits. It has a high robustness, but the precision of its predictions is low.

A good predictive model is a compromise between both. The complexity of the class of functions is called the VC dimension. It is used to determine the best predictive model. 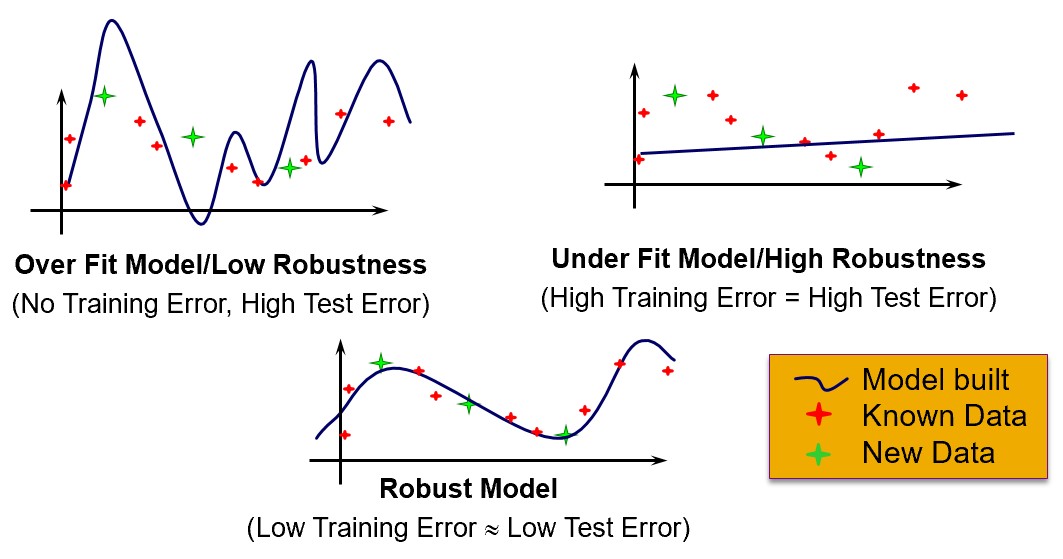 To explain shortly, this is based on 4 principles:

Based on these 4 principles, the training dataset is split in two parts:

The process to build a classification predictive model is an iteration of model’s construction with greater VC dimension at each step, until the error on validation dataset increases. The final predictive model is the best model obtained at previous step as illustrated in figure 5. 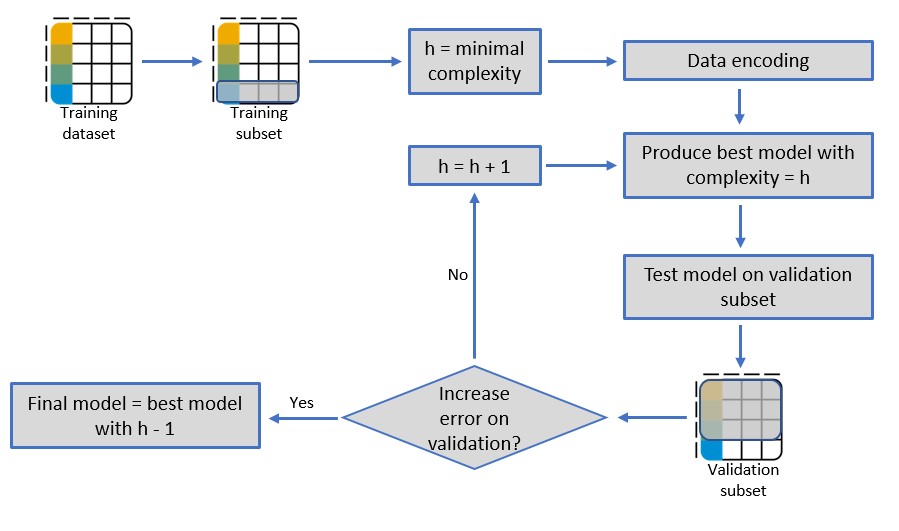 Data encoding is the component which quickly and automatically transforms raw data into a “mineable” source of information. It automates data preparation and pre-processing:

To produce a predictive model, Smart Predict proceeds like this:

Understand the outputs of a Smart Predict classification

In this section, I go back to the use case mentioned above. First, you create a Classification Predictive Scenario named “HR Flight Risk”. In the settings used to build the predictive model, you notice that the training data source is the training dataset. I don’t need to precise the split between training and validation subset. Smart Predict will do the job for me with the default ratio (75% randomly picking for training and the remaining 25% for validation).

The target is the variable “Flight_Risk” where value 1 means “will churn” and value 0 means ‘Will stay”. 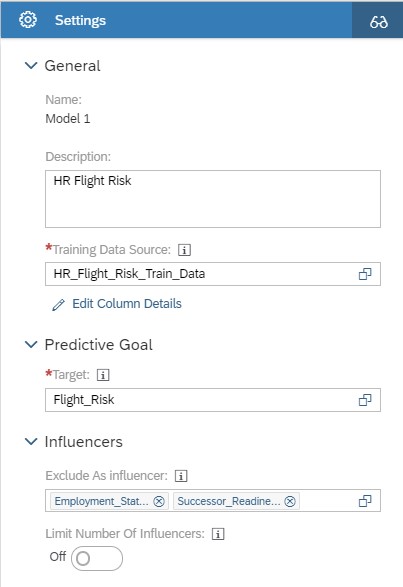 Fig 6: Settings of the classification model

Note that some variables are excluded from the analysis:

Now, I save, and I train the predictive model. After few seconds, Smart Predict has completed the training step. The status is displayed as in figure 7.

Fig 7: Status of the classification model

These two indicators are computed based on the graph shown in figure 8, which represents how good the « positive » cases are detected.

The red line is a random picking. This means that there is no predictive model. To take an image, it’s like to play to heads or tails. On the opposite, the green curve represents a perfect predictive model.

The orange and blue curves correspond to the percentage of positive cases when ordering by decreasing score / probability.

Prediction Confidence expresses the ability to reproduce the same detection with a new dataset. A « validation sample » is necessary to estimate it. It represents another view of the same population and is equal to one minus area between Validation and Training divided by area between Perfect and Random

Another part of the debrief of a classification is the contributions of variables. They are displayed sorted by decreasing importance. The most contributive ones are the ones that best explain the target. The sum of the contributions equals 100%. 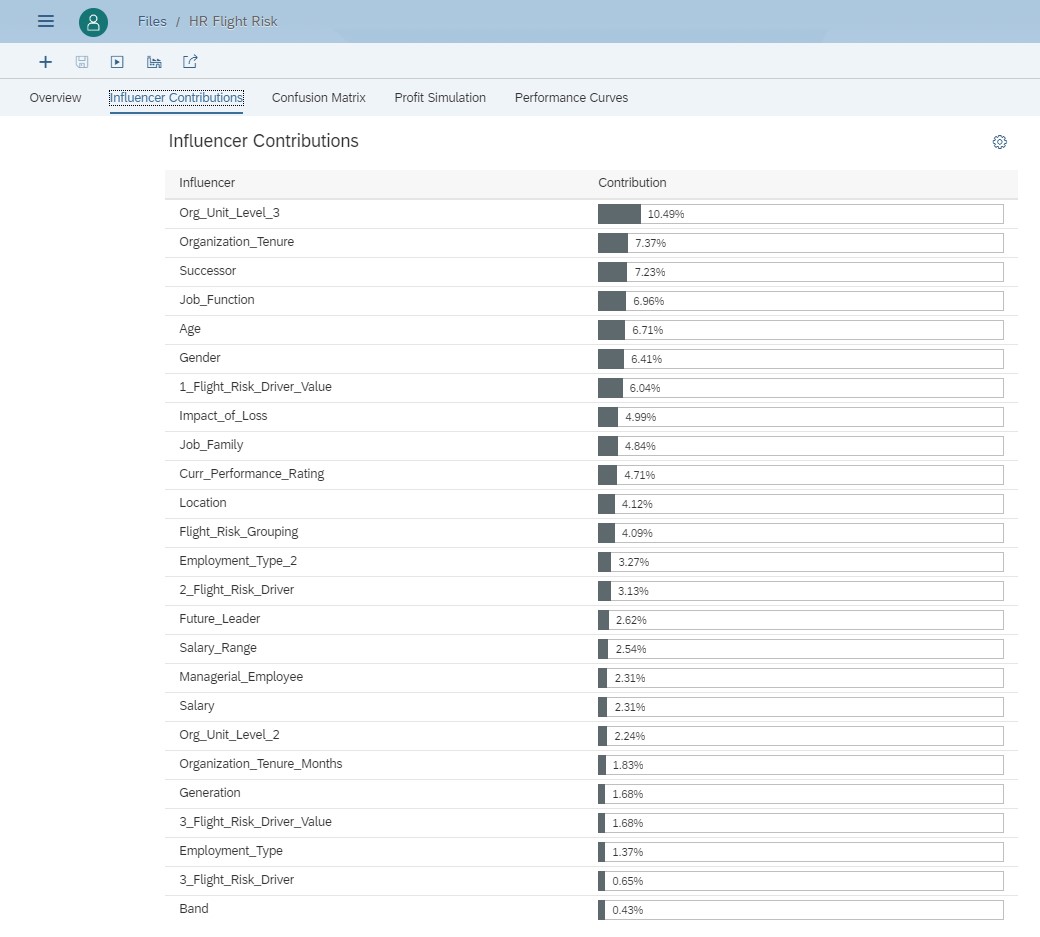 For our use case, the organization unit is the most contributive variable. But let’s continue the analysis of the debrief.

If you scroll down in previous figure, you will get a detailed report about the influencer contribution.

This report gives a lot of information as shown in the red bullets. There are 2 main points to look at in this chart:

Variable “Age” influences also the target. The graph of figure 10 shows that people between 53 and 70 and people between 21 and 48 have positive influence on the target. This means that if an employee is in one of these ranges of age, his/her flight risk will be higher than if he/she is in the range ]19, 21]. It corresponds to people who are near retirement (]53, 70]) and very active and senior people (]21, 48]). But can we act on age to avoid flight risk? Or do we want to act to retain some age categories? Let’s examine variable “Successor”.

When the employee could be a successor but is not still ready to be the successor of another employee (because of the juniority in the position, for example) then the risk to see him/her goes away is higher. It can be considered as an impact of a bad career management.

On the opposite, when an employee has not been identified as a successor and for the other values of variable “Successor”, the risk to see such employees to leave the company is lower.

It appears that most job families are more likely to be flight risks in comparison to Administrative Support. It seems that having a position of Directors or Senior Manager increases the risk of employee churn compared to other jobs.

For example, if you select 30% of the employees with the highest attrition probability because your budget is limited, the classification model tells you that within these 30 %, you capture 65% of employees who will probably leave. You can focus your actions to reduce attrition of these. But if you put the threshold at 45%, you will capture only 80% of employees.

You can select with the slide bar the 30% of employees with the highest attrition probability and see the percentage of employees you will capture.

The confusion matrix will show you the performance of the predictive model by comparing the predicted values of the target with its actual values. 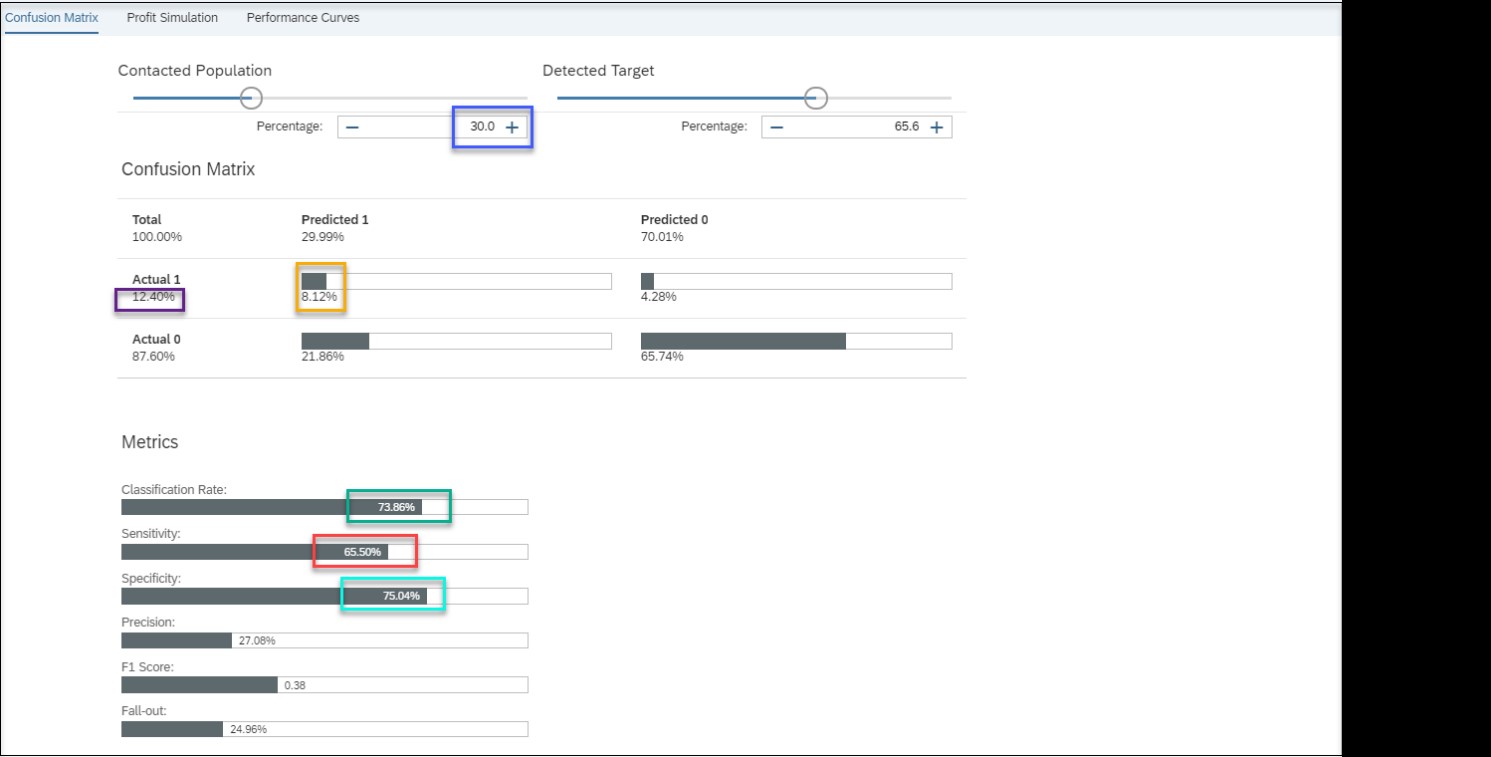 I just recall some definitions to help you understand how to interpret this confusion matrix. To get all definitions, read the section of the online help.

The main diagonal represents the True Positive and the True Negative. In other words, it is when the Classification predictive model does correct predictions.

The second diagonal represents False Positive and False Negative. In other words, it is when the Classification model does incorrect predictions.

Similarly, the specificity (light blue rectangle) measures the percentage of employees who will stay (actual negative) that have been correctly classified (true negative). Here it is 75.04%.

Taking actions to reduce attrition is not free and maybe you would like to know the impacts and costs of your decisions. This is the objective of the Profit Simulation.

The difficulty is to estimate a relevant threshold (30% in our use case). Once you have set the cost of good predictions and the cost when you predict that an employee will effectively flight (yellow rectangle in the figure below) , you can use the profit simulation and move the slide bar to change the percentages of contacted employees and detected target. 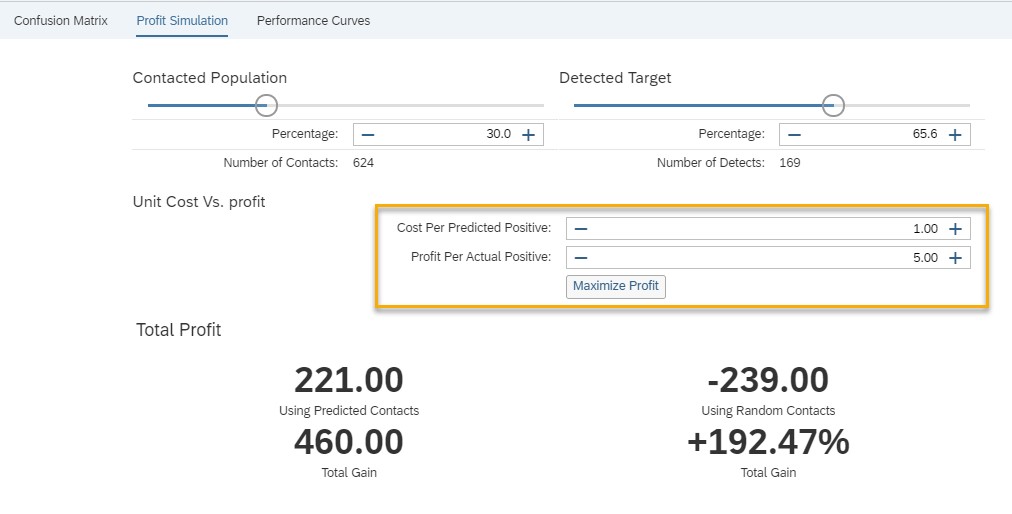 The profit simulation role is to choose a threshold. One way to choose that threshold is to optimize the profit. In our use case, with these costs, the best profit (click on “Maximize Profit” button) is obtained when you will contact 19.9% of the employees. 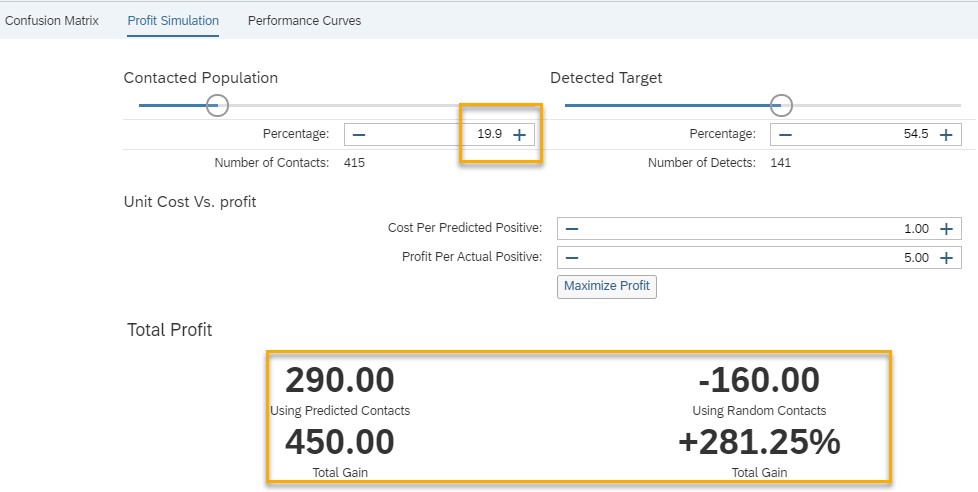 Until now, we have seen how a classification model is built. What kind of insights Smart Predict provides. How to interpret and to use this information to better know data and take appropriate actions. There is another usage of a classification model: apply it on new cases: this means that you will use the predictive model on a new dataset, where the target variable is unknown.

From the human resources use case, the classification predictive model gives the probability of an employee to leave the company. See how this work.

Select a classification model and click on the “Apply” icon. In the dialog you enter: 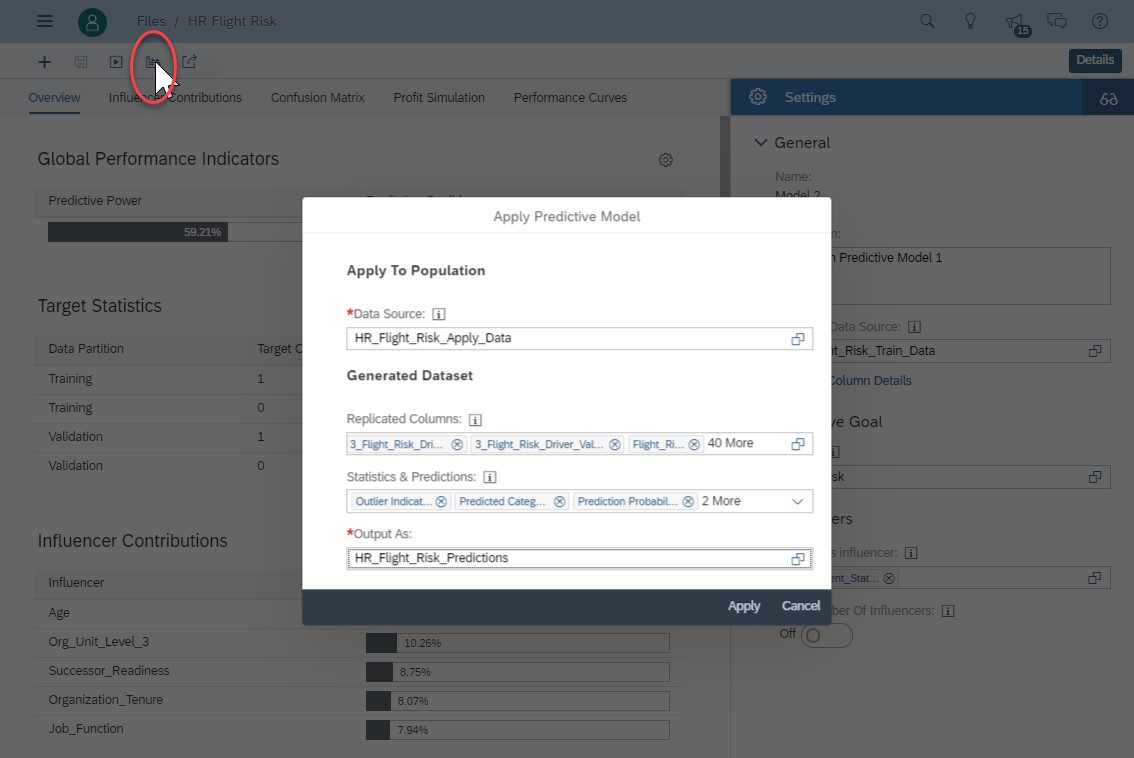 Once this process is completed, a message is displayed in the status pane.

Let’s now examine the predictions generated in the dataset HR_Flight_Risk_Predictions.

In SAP Analytics Cloud, browse to the location where you have stored this output dataset and open it. The last columns of the dataset contain the predictions.

While it is great to see each individual employee, it may be easier for us to consume this information through visualizations! To do this, we need to create a BI model out on top of the output dataset to use the data in a BI or planning story as shown in figure 20. 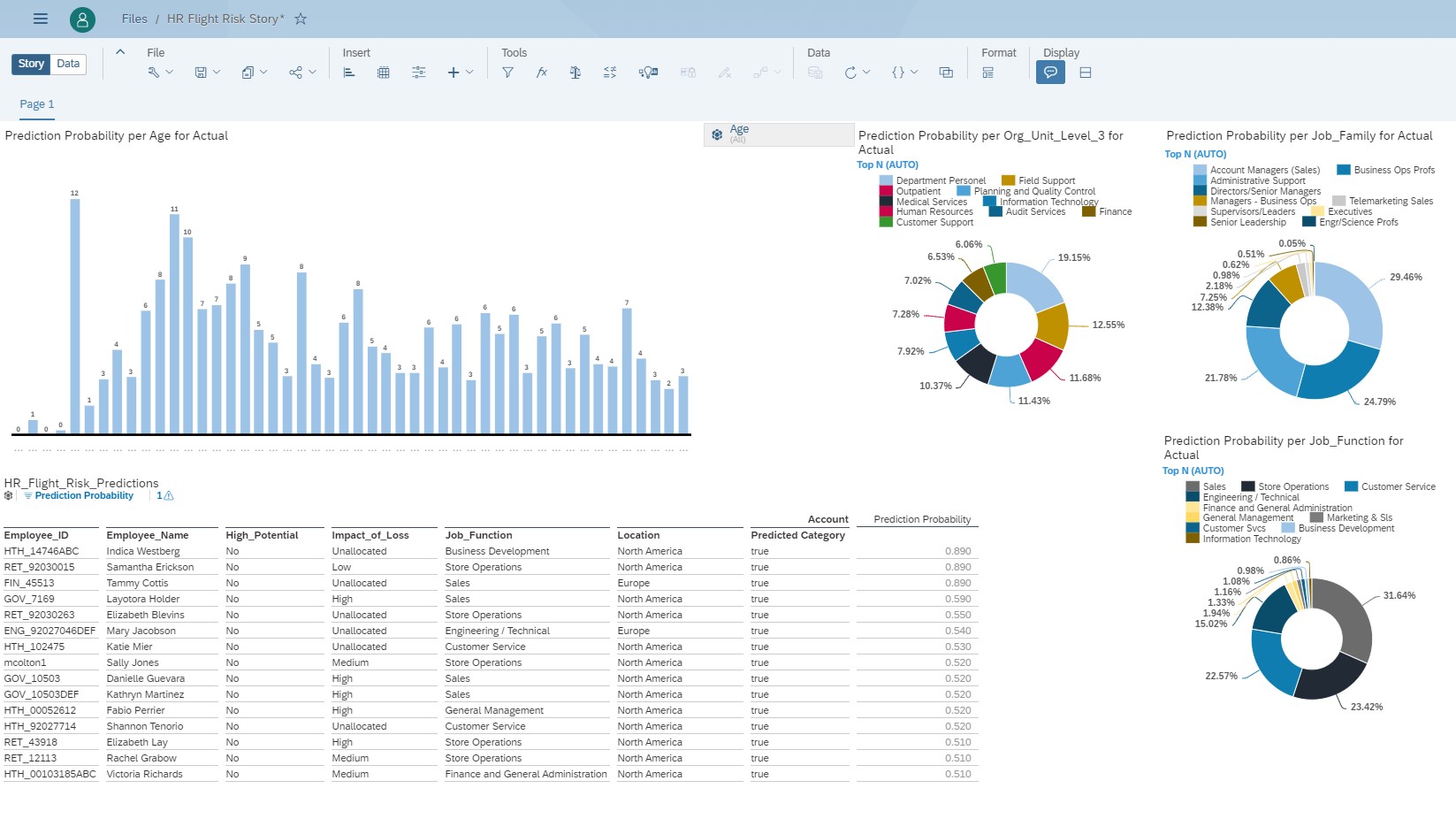 Fig 20: Predictions probability of employees to leave shown in a BI story

Congratulation, you have reached the end of this blog. My wish is that I have clarified the way Smart Predict is doing classification, your understanding of the insights provided in the debrief section and how to use the predictions in a story. I also hope these explanations increase your confidence in the product.