Allies in Conversation – Tracing Journeys on the Path to Inclusion

“The world isn’t binary. Everything isn’t black or white, yes or no. Sometimes it’s not a switch, it’s a dial. And it’s not even a dial you can get your hands on; it turns without your permission or approval.” ~Symptoms of Being Human, by Jeff Garvin

Each one of us, at some point in time, has been made to look at the world through this lens of conformity, forced to abide by the rules society makes or given choices that are often mandates of what is acceptable, what is right.

But it is in that one moment of acceptance and awakening that we learn to look beyond this perceived propriety and embrace diversity in the true sense of the word. 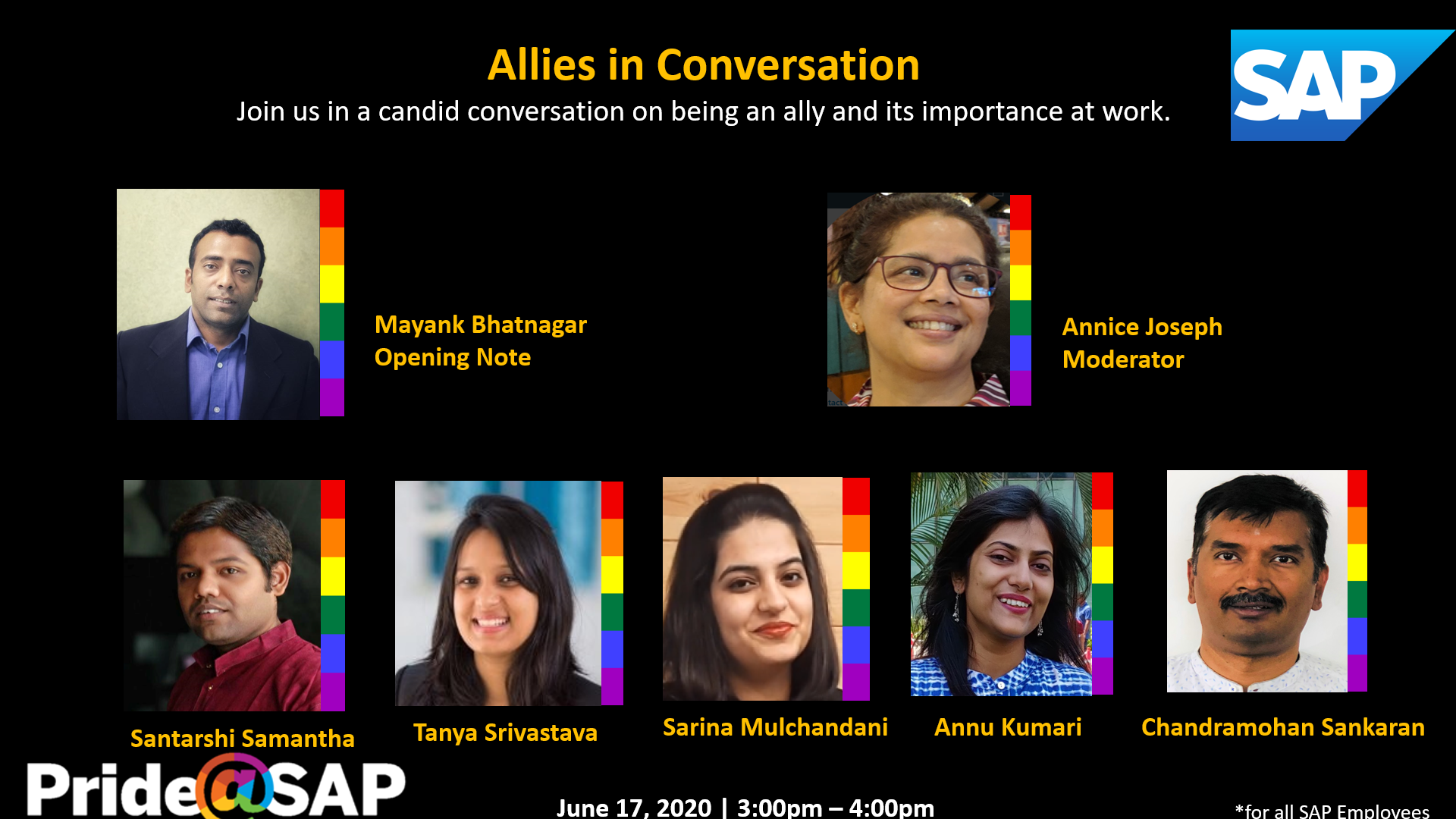 As part of the Pride Month celebrations, members of the Ally@SAP community from across entities got together on June 17th for the Allies in Conversation panel discussion, to share their stories and experiences, and defining moments on their path to promoting the cause of gender diversity and inclusion.

Moderated by Annice Joseph, Global Co-Lead for Inclusive Career Journeys, the session was opened with an insightful introduction by Mayank Bhatnagar, the Diversity and Inclusion Lead for SAP India.

Mayank started off with a thought provoking discussion centered around the stress of balancing work and life, and the added emotional labor of having to conform with society’s norms regarding gender expression. Sharing SAP’s idea of inclusion and creating environments replete with respect, he stressed on the importance of showing support, a way of doing which is being a part of the Ally community at SAP. He then opened the floor for the panel discussion.

Annice initiated the discussion by aptly setting the context on the topic of gender inclusion, its indispensability at the workplace and the need for a community of crusaders, who relentlessly champion the cause.

Sarina Mulchandani from SAP IBSO was called on to share her journey of becoming an Ally. Sarina shared memories of growing up in a patriarchal setup, with notions of gender roles and conformity all around her, but slowly getting to know the gender spectrum during her teenage. She mentioned how jokes and mockery on the subject did bother her, but she never vocalized her views until she got a chance to meet the world-renowned LGBTQIA+ activitist Alok Vaid-Menon, a transfeminine artist, who changed her world-view on topics of gender, art, fashion and life itself. She was really perturbed by the idea that expressing one’s sexual orientation could actually mean a risk of life, and that is what she calls her point of inflection, from being indifferent to being active in creating a safe space for people to be who they wish to be. Continuing on the idea of insensitivity towards people from the community, Santarshi Samanta from the NW JAVA | SCP | CPI team shared his transformation from laughing at effeminate jokes to being a voice for the community. For him, the pivotal moment was when a close friend and colleague of his came out to him, which made him realize how those jokes were targeted at real people with daily struggles, and added to their trauma. He took it upon himself to become aware on the subject to be a supporter and a friend one could confide in!

Annice very rightly pointed out the way we overcome automatic thinking and resort to reflective thinking as we grow, leading to a change in our mindsets.

Tanya Srivastava from the Customer Office had a very heart touching account to narrate. She grew up knowing people from across walks of life, with her mother ensuring she was empathetic to differences around her. As a young college girl, she became friends with and later developed a deep affection for one of her college-mates. The person later came out about his orientation to his close group of friends, which made Tanya realize how tough life can be for gay people and the injustice and stigma attached to all this. She vowed to ensure everyone can be expressive as a norm, and not as an exception.

Another very relatable account was shared by Annu Kumari from the API Management team. She recalled how she used to be afraid of trans people who used to ask for money at traffic signals, which is a common sight across the country. She took time to understand why they did this, with some fear at the back of her mind. But her parents were her guiding light, who adequately sensitized her early on, which led her to becoming more inclusive, and her understanding on the issue now allows her to be very confident of working alongside colleagues from the community.

Annice then invited Chandramohan Sankaran, a development manager with the Cloud Platform unit and also a D&I Mentor and Professional Coach at SAP, to talk about his experience of being both an Ally and a coach. Chandra shared how a colleague coming out to him made him a supporter of gender diversity, but his actual journey of being an active Ally began with a coaching session on an active listening forum where a trans person told him how they feel trapped inside the wrong body. Imagine having to wake up every day and feeling the same way.
These experiences and his expertise drive Chandra to work for the anonymous conversation initiative, along with Sameer Kumar Ranjan, the lead for Pride@SAP.

The discussion ended with some powerful quotes and the promise to keep the conversation going here and beyond!

“No one should live in a closet!” ~ Harry Potter by J.K. Rowling