This is the third part of the 4 blog posts regarding what is new on the ABAP Platform:

In the previous blog posts, I have been talking about the evolution of the SAP Netweaver platform towards the ABAP platform and how the ABAP programming language has been updated and modernized with the introduction of new programming models.

Now, in the Part 3 of my blog series, I would like to focus on the basis area and describe some of (in my opinion) most interesting features introduced by ABAP Platform for the basis administrators.

As I mentioned before, ABAP platform replaces SAP Netweaver as the technology stack for S/4HANA and also breaks the backward compatibility with previous SAP Netweaver versions.

After many years, it was time to clean obsolete functionality that is not used anymore and to adopt new technologies and a new programming model necessary to build and run SAP software on the cloud. These innovations required profound technology changes in the technology stack, changes that were not possible if you need to maintain combability with the old SAP Netweaver stack.

So let’s see what are the main changes…

No support for legacy operating systems

I was a huge fan of the Solaris operating system, I still have some Sun Microsystems servers at home as part of my personal collection, and I have been using HP-UX for a long time… but in 2020, in the era of the hyperscalers, these operating systems cannot compete with Linux and Windows.

The following table summarizes the main changes between Netweaver and ABAP Platform:

Based on the customer´s feedback we see most customers choosing Linux x86_64 as their preferred platform to run SAP systems, although Windows and AIX are still supported and are perfectly valid options.

If you have been working as SAP basis administrator for some time, you probably know that SAP introduce, change or remove profile parameters continuously. As the same SAP Kernel is used by a variety of SAP products and versions, these frequent changes in the parameters had to be as compatible as possible to avoid undesired collateral effects.

But SAP ABAP Platform 1809/Kernel 7.7x it’s different, it breaks the downwards compatibility with old kernels and SAP Netweaver versions. It’s the perfect opportunity for SAP to clean all these historical and obsoleted parameters that has been around for many years.

There are 2 main areas that has been cleaned and/or optimized:

The Virtual Machine Container (in short VM Container or VMC) was a component integrated into the SAP Web AS ABAP that enabled Java functions that complied with the Java Standard J2SE 1.4 to be executed in AS ABAP.

As per note SAP Note 2560708, Kernel for S/4 HANA does not support VMC since 1809. Therefore, there are a lot of VMC and JVM parameters that are not supported anymore and must be manually deleted from the SAP instance profiles.

The goal again, has been to remove obsolete parameters and simplify the administration of the ICM / Web Dispatcher components, which now with FIORI are critical components of the SAP systems.

This is, in my opinion, an interesting feature introduced for SAP S/4HANA Cloud but also available in SAP S/4HANA “Any-premise” versions as these SAP S/4HANA product share the same code.

There are 2 new concepts: runlevels and maintenance periods.

Transaction SMAINTENANCE allows you to define a maintenance period:

There are different runlevels, from runlevel 0 (system running in normal operation) up to runlevel 100 (System in maintenance) that allow a more flexible way to define what is the status of the SAP System and which actions are allowed or not depending the runlevel:

As you could imagine, this is a must-have feature for cloud products, as the maintenance of the systems must be as transparent as possible for the end users but it’s also very useful for on-premise administrators that want to simplify and automate their regular maintenance tasks.

When the maintenance mode is activated on the SAP S/4HANA on-premise systems, only the SAP system administrators (with the right security profile) will be able to connect: 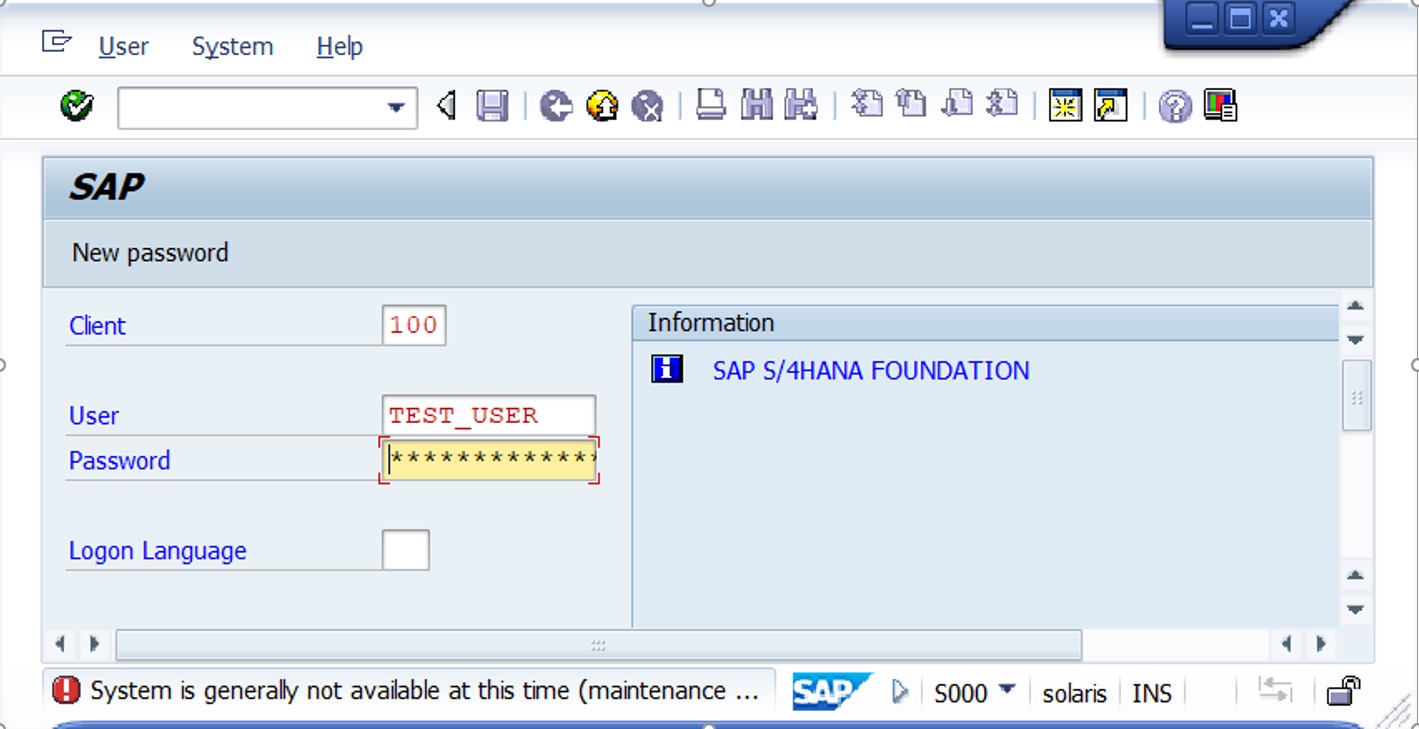 After many years without important changes, finally there is a new version of the tools to create, delete and manage the SAP clients.

The main changes can be summarized as:

The following table, extracted from the official SAP help describe the new transactions and tasks lists available in ABAP Platform:

As an example, now you can estimate the size of one SAP client and get a detailed overview of which tables consume more space using the new SCC_CLIENT_SIZE transaction that replaces the old reports:

When a process consumes all his memory quota (Extended Memory + HEAP memory) an ABAP Short Dump is generated (e.g. TSV__NEW_PAGE_ALLOC_FAILED) and the process is cancelled as a protection mechanism to avoid a complete system crash.

Up to now, it was impossible to get an “early warning” when a process was consuming too much memory. The only option available was a proactive monitoring, checking which processes were consuming more memory and trying to react before it was too late.

Starting with kernel 7.77, when a process consumes more than a user defined percentage of his memory quota is possible to generate a soft dump:

The main difference between the classic ABAP short dump and the new soft dump it’s that the process is not cancelled but systems administrator can react to the warning and decide what is the right action:

As you can see in the previous example, although the memory quota was ~6GB the session memory warning was configured at 3.6GB

Another interesting feature that I am sure will be very useful for systems administrators is the option to allow a more flexible configuration of the memory quotas.

The default memory quota applies to all users, by default nobody can consume more memory. However, with the quota extensions we can grant specific users (must be registered in transaction SMEM_USEREX) a different quota, allowing them to consume MORE or LESS)

Quota extensions and quota warning can be controlled with the following parameters:

Systems administrators must register users via transaction SMEM_USEREX in order to be allow them to use the new quota exemption mechanism:

Another significant improvement belongs to the ABAP connectivity area and is the internet-enabling of RFC. The new WebSocket RFC allows RFC calls over HTTP/WebSocket and is always transferred via SSL to ensure security. VPN tunneling is no longer required for RFC connections across business networks.

Most ABAP applications use polling techniques to achieve an event-driven communication. For pushing an event from an ABAP backend to a browser-based user agent like SAPUI5, Web Dynpro, Business Server Pages (BSP) or WebGUI, a polling in multi-seconds interval is frequently used. This is a quite system resource consuming technique. In SAPGUI usually the timer control is used to detect an event in the ABAP backend system. ABAP Channels technology targets to replace such inefficient eventing based on polling techniques through push notifications based on publish-subscribe infrastructure and WebSockets in ABAP.

With WebSocket RFC, RFC are finally compatible with modern cloud and internet architectures: 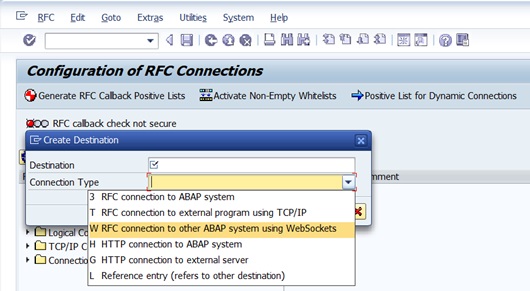 Up to now, “technical users” (e.g. system administrators, users for interfaces and batch jobs, etc…) and “business users” (people that executed the business processes inside SAP) were defined exactly in the same way, via transaction SU01 and their main difference were the SAP authorizations and login details.

Starting with SAP S/4HANA 1909, there is a new identity model for business users.

So now, in transaction SU01, there is a clear distinction between Technical users and Business Users:

If you have installed a new SAP S/4HANA 1909 or you already converted your SAP system, I really encourage you to have a look in detail to these new features. We really believe that these changes will help you to operate SAP more efficiently and will simplify your regular maintenance tasks.

Question - what about the zero memory management feature in 1909 ( From the Windows perspective still applicable in this new version)?

This is an interesting topic! I am preparing a new blog post to talk about this…

Major changes in the Memory Management of the SAP NW AS ABAP were introduced with SAP Netweaver 7.40 SP02 (Based on Kernel 7.4x)

The old fashioned Zero Admin Memory Management for Linux and Windows (ZAMM) was extended to all other OS and reimplemented via formula based parameters. These changes allowed a more simple configuration of the ABAP instance via one main parameter (PHYS_MEMSIZE).

After that, if my memory serves me well, SAP Netweaver Application Server ABAP 7.50, 7.51 and 7.52 did not add additional changes in the memory management area, although there were changes in the dispatcher and ICM configuration that indirectly affected the memory consumption.

Starting with ABAP Platform 1809 (Kernel 7.7x) there were more changes in the ICM area and many deprecated parameters were removed but I am not aware of main changes in the memory management.

Thank you Juan for sharing the details. It was an interesting read!

Interesting Info.. I like Smaintenance  and client copy enhancement..

I like it too. It is a pain now for us to enable secpol from rz11 during maintenance and after restart Business users connect to the system if the parameter is not enabled again from rz11.

I'm trying to understand the practical use of the WebSocket RFC.

Would both the caller and destination systems need to be S/4 HANA 1909 for this to work? Or just the calling system where you define the RFC destination?

Can you suggest a real life scenario where this may be useful?

Tons of thanks Juan. I am functional consultant and trying to undestand what is getting changed with S/4 HANA. Now i got all my questions answered . So far the the best summary!!

What about NEW FEATURES for basis admin in