SAP Screen Personas relies heavily on SAPUI5 during both design- and runtime. The flavor, script, and theme editors all use SAPUI5 controls. When you open the flavor manager in SAP Screen Personas at runtime, this too uses SAPUI5 libraries. Slipstream Engine employs SAPUI5 extensively to render simplified SAP GUI transactions (SAP Screen Personas flavors) on phones, tablets, or desktops.

Usually, everything works seamlessly and you don’t need to worry about what version of SAPUI5 is running. Sometimes, different solutions load their own version of SAPUI5 (SAP Fiori launchpad, for example) and you need to know when and how to configure the versions to ensure compatibility.

The SAP Screen Personas client and Slipstream Engine components can be loaded either independently or in conjunction with each other. The two components have different SAPUI5 version dependency requirements. Here some examples of different scenarios:

Each SAP Screen Personas service pack comes with a slightly customized SAPUI5 version that is used for:

The SAPUI5 version that is loaded with SAP Screen Personas in SAP GUI for HTML is not changeable by end-users and is not required for flavor rendering. So, if you are using Web GUI, everything is taken care of and there is no action you need to take.

For Slipstream Engine, you might need to perform some additional configuration to ensure SAPUI5 compatibility if the SAPUI5 version installed on the front-end server is different than the SAPUI5 version loaded when creating SAP Screen Personas Slipstream Engine flavors that you deploy on the SAP Fiori launchpad as SAPUI5 Fiori apps. There are also some other situations that might create a need for manual configuration to ensure SAPUI5 compatibility across different SAP solutions you are running together. 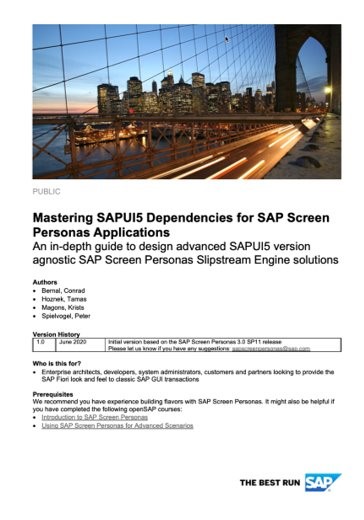 Thanks to Krists Magons, Tamas Hoznek, and Conrad Bernal for contributing to the guide and blog.

Thank you Peter for keeping us abreast with the latest development with Personas. I have question; is there an online resource that will help the analysts to start developing flavors using SAPUI5? Similar to openSAP courses for advance scenario in regard to scripting.

SAP TechEd session IIS201 will have a good example. If you are not able to attend, we will make the learning materials available afterwards.