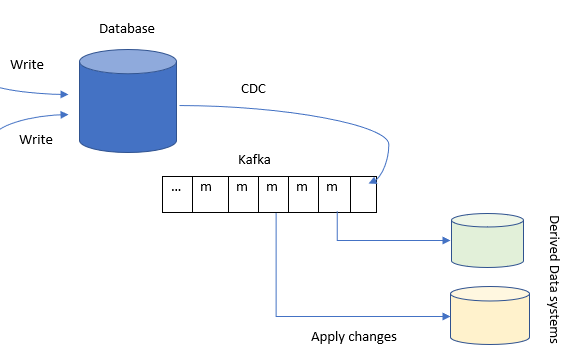 The derived data systems in practice might be indexes, caches, analytics systems, etc.

In order to build a log-based integtation, we need two critical tools:

In this tutorial, we want to explore how to achieve data integration between database and various other derived data systems using a log-based approach in SAP Data Intelligence.

Change data capture(CDC) is the process of observing all data changes written to a database and extracting them in a form in which they can be replicated to other systems.

Apache Kafka is a message broker which persists the messages it receives. It provides a total ordering of the messages inside each partition. SAP Data Intelligence has built-in Kafka operators which allows us to use a Kafka cluster.

Next, we will see how to leverage these two operators to implement a concrete integration scenario.

We prepare a Hana database table, and its schema is illustrated as below. 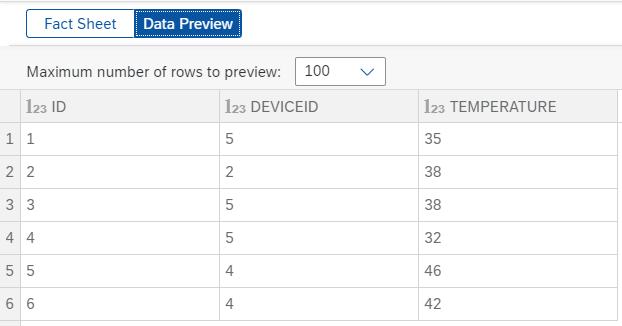 For simplicity, we only use factitious data for demonstration purpose. The table initially contains 6 records.

We will create separate graphs for these two tasks.

The Table replicator operator configuration is illustrated as below. 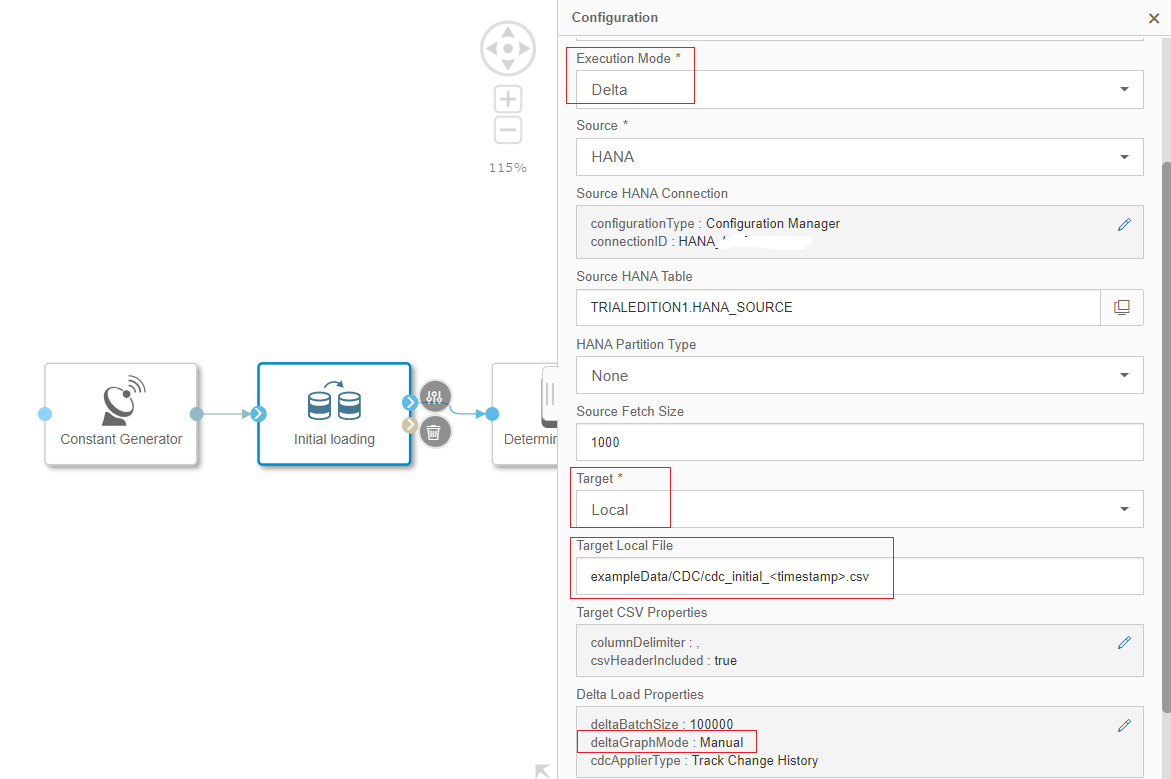 The important configuration parameters are marked in red box.

Note that the deltaGrapMode is set to Manual. This ensures the graph would complete its execution as soon as the initial loading completed. Otherwise, the graph would run indefinitely to track further delta changes.

Now run the graph, and verify the target file has been generated once the graph runs complete. 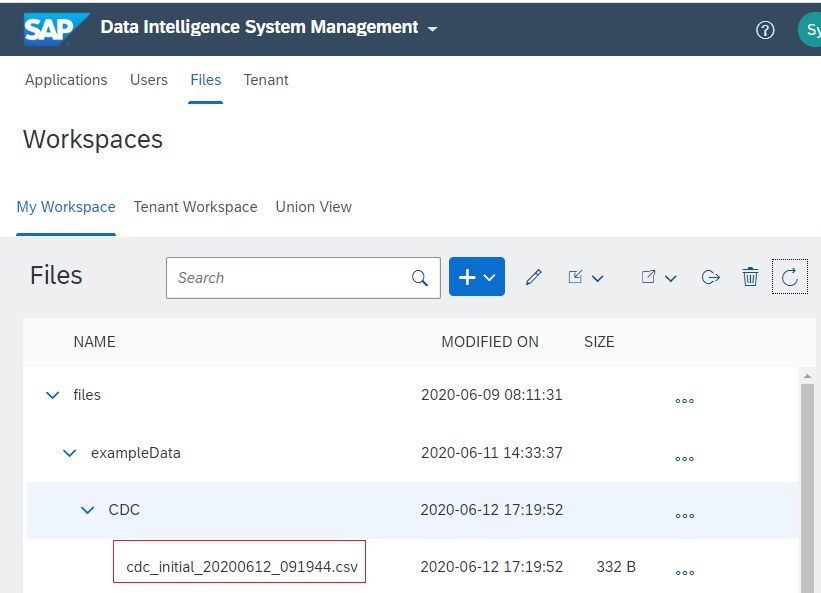 Open the file and verify the table content has been replicated successfully.

Note that delta record provides a row type like Insert (I), Update (U), Delete (D), Before Image (B), Unknown (X), and so on. In our case of initial loading, the row type is I which means insert record. The row type in the message is named as DI_OPERATION_TYPE.

Our initial loading task has been finished successfully. Next, let’s turn to the Delta extraction task.

Let’s take an overview of the dataflow sequence.

Now let’s look at the configuration of some operators. 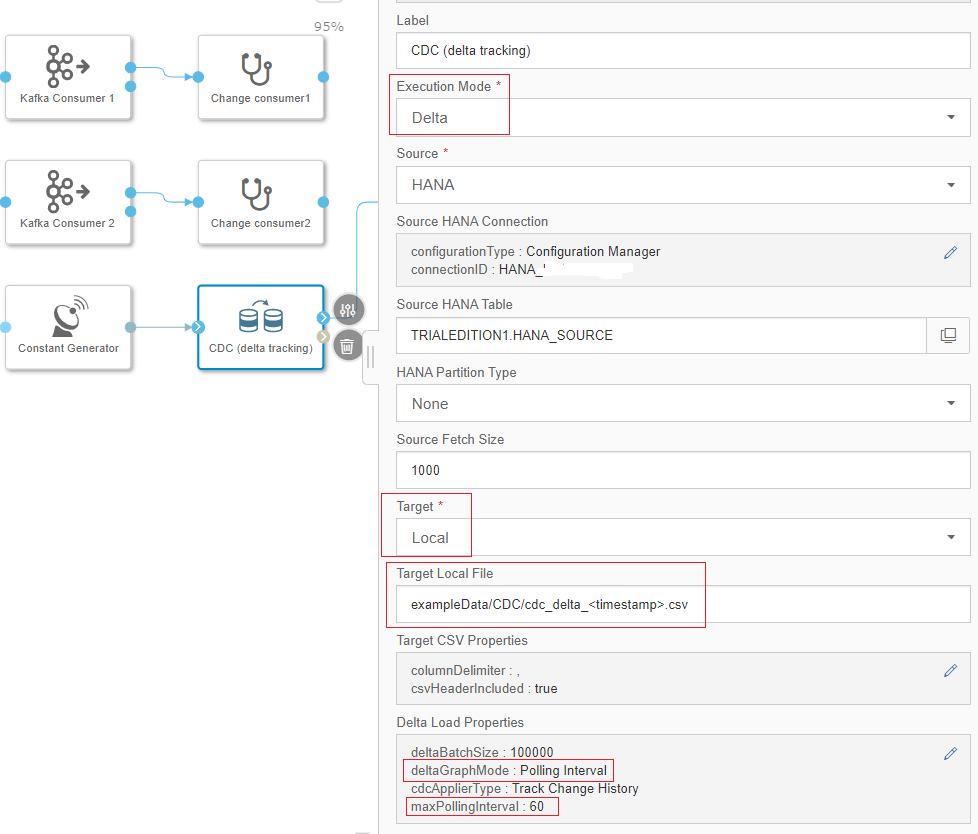 Note that the deltaGrapMode is set to “Polling Interval”, and the maxPollingInterval is set to “60”. This ensures the graph would run indefinitely to track delta changes, and Table Replicator will polling the delta changes within one minute.

It simply removes the “/vrep” prefix from the received message body which contains the target file path.

Its script code is shown as below.

It parses the received file content line by line. And each line represents a message and will be immediately sent to the downstream operator. 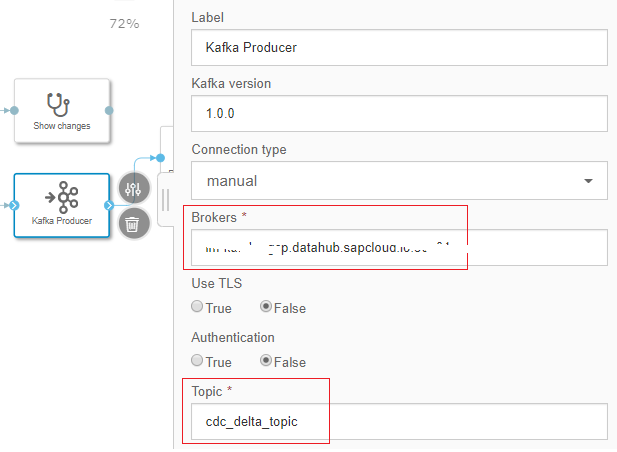 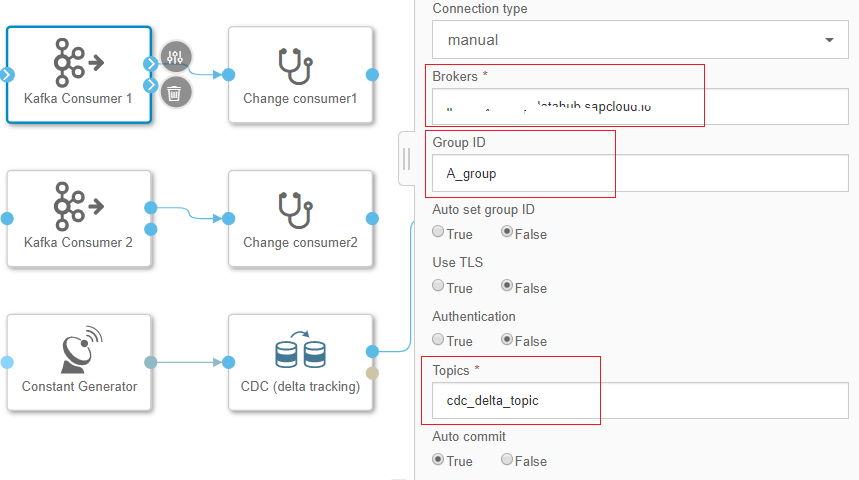 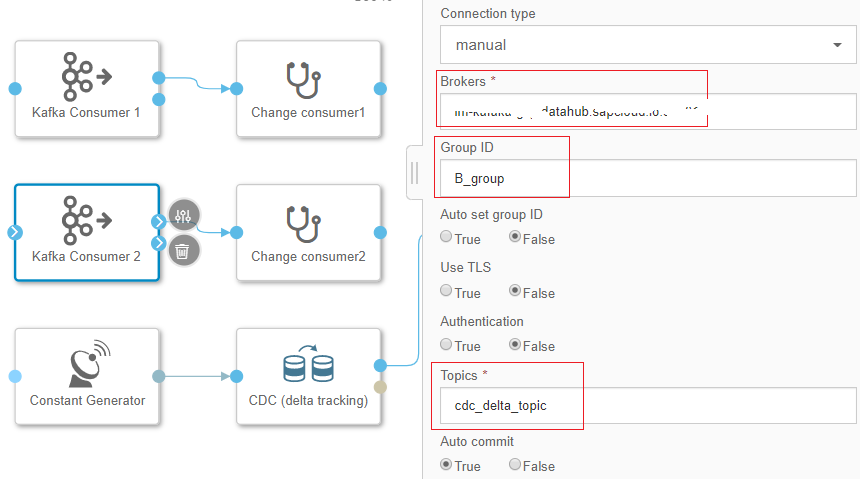 Note that the “Group ID” configuration are different for the two consumers. This is important since we want to achieve fan-out messaging. That is, a single Kafka partition consumed by multiple consumers, each maintaining its own message offset.

Now we can start run the graph by clicking the run button. Next we will start to write to source table through insert, update and delete operations and observe how the changes will be replicated into the derived systems.

Let’s insert one record into the source table by running the below SQL statement.

Go to Data Intelligence Local file system work spaces, check and verify the target file has been generated, as below figure illustrated. 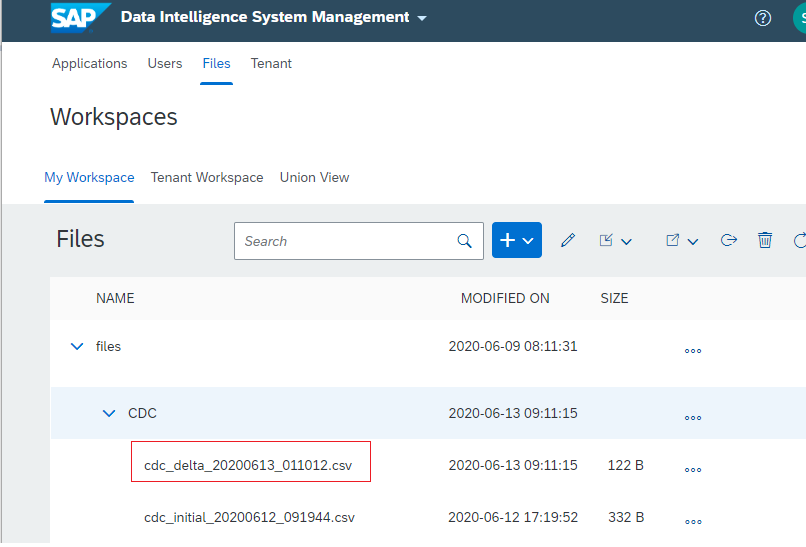 Open that file and verify the message for the inserted record has been replicated to the target file successfully, as below figure illustrated.

Finally, we open the change consumer wiretap UI to check its output, as below figure illustrated.

Let’s update one record in the source table by running the below SQL statement.

Check and verify the target file has been generated, as below figure illustrated. 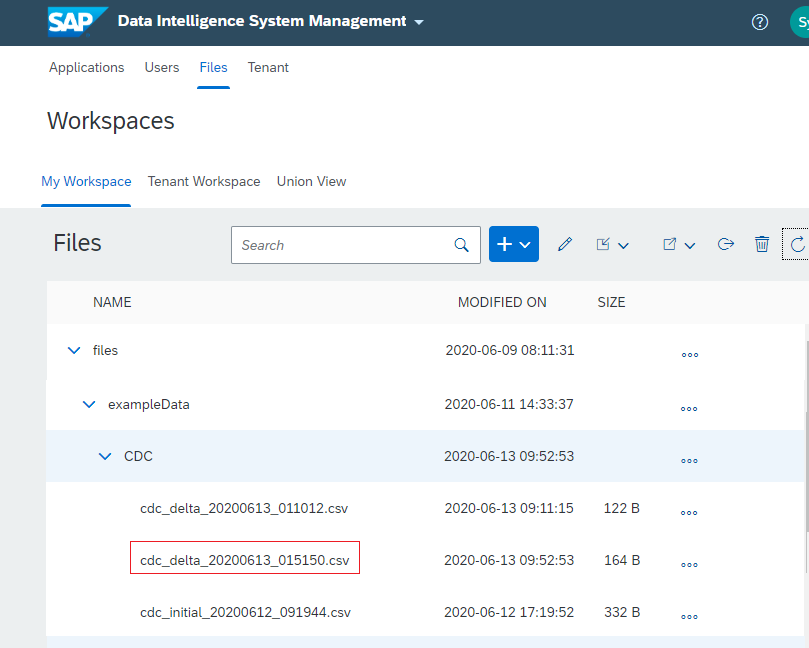 Verify the messages for the updated record have been replicated to the target file successfully, as below figure illustrated.

Note that for Update statement, its change is composed by two messages. Their row types are Before Image (B) and Update (U) respectively.

The Change consumer wiretap UI output is as below figure illustrated.

Let’s delete one record in the source table by running the below SQL statement.

Check and verify the target file has been generated, as below figure illustrated. 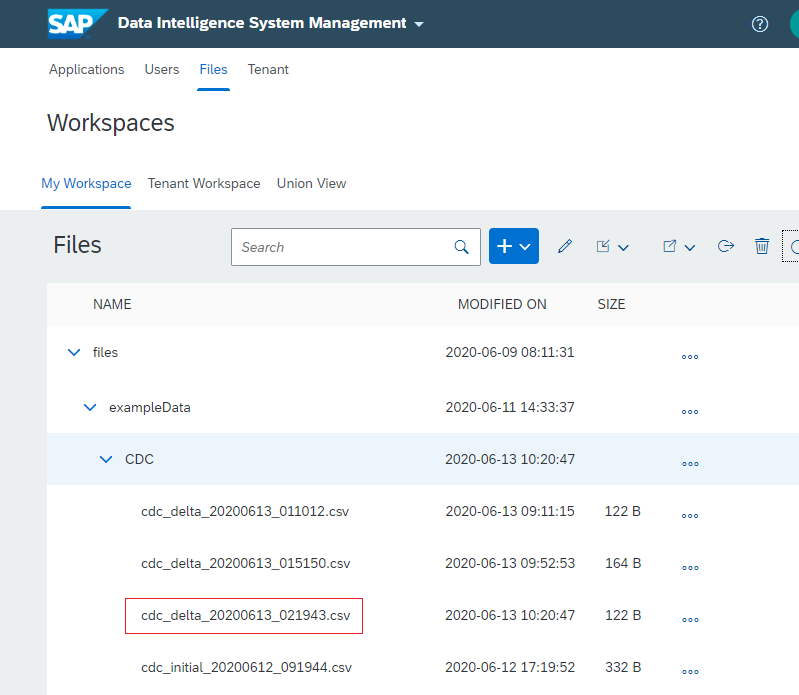 Verify the change message for the deleted record has been replicated to the target file successfully, as below figure illustrated.

The Change consumer wiretap UI output is as below figure illustrated.