This is the second part of the 4 blog posts regarding what is new on the ABAP Platform:

In the previous blog post, I presented you the evolution of the SAP Netweaver platform towards the ABAP platform. Now I going to provide a short overview of the new programming models available in ABAP Platform and SAP Cloud Platfrom, ABAP Environment.

Evolution of the ABAP programming language

Most of all SAP functionality developed in the last 40+ years is written in ABAP. The ABAP programming language is our flagship and has demonstrated that is a proven and robust platform to develop business applications.

Over the years, SAP has updated and modernized the ABAP programming language, we can distinguish 3 main milestones:

It’s no secret that many of our SAP customers are still running and developing SAP software using the classic ABAP programming model available for SAP products based on SAP Netweaver 7.40 and lower.

With the ABAP release 7.4, SAP started to optimize the ABAP platform for the SAP HANA in-memory database (code push-down) but many of these applications are still based on classic Dynpro, Web Dynpro ABAP, Floorplan Manager and WebClient UI framework.

Why a programming model? Because it offers a standardized, well-documented, model-driven programming model that highly improves default implementation tasks. Of course, applications can be developed without a pre-defined programming model. However, this results in very heterogeneous approaches across different application areas (e.g. no common approach for integrated testing, traceability and support tools for the end-to-end stack, UI decoupling is not guaranteed, etc…)

The ABAP Programming Model for SAP Fiori was based on proven technologies (CDS, BOPF and SAP Gateway). 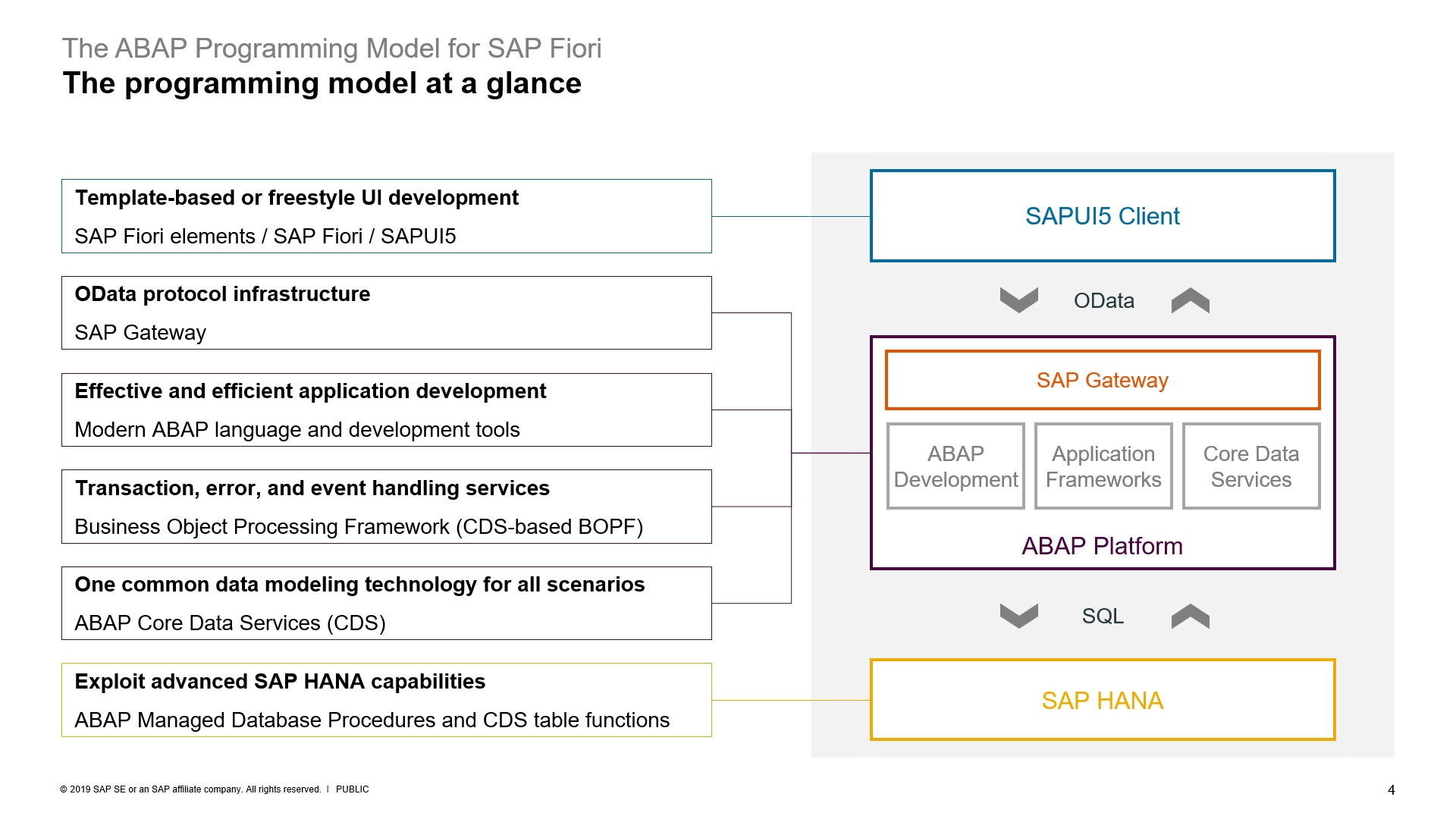 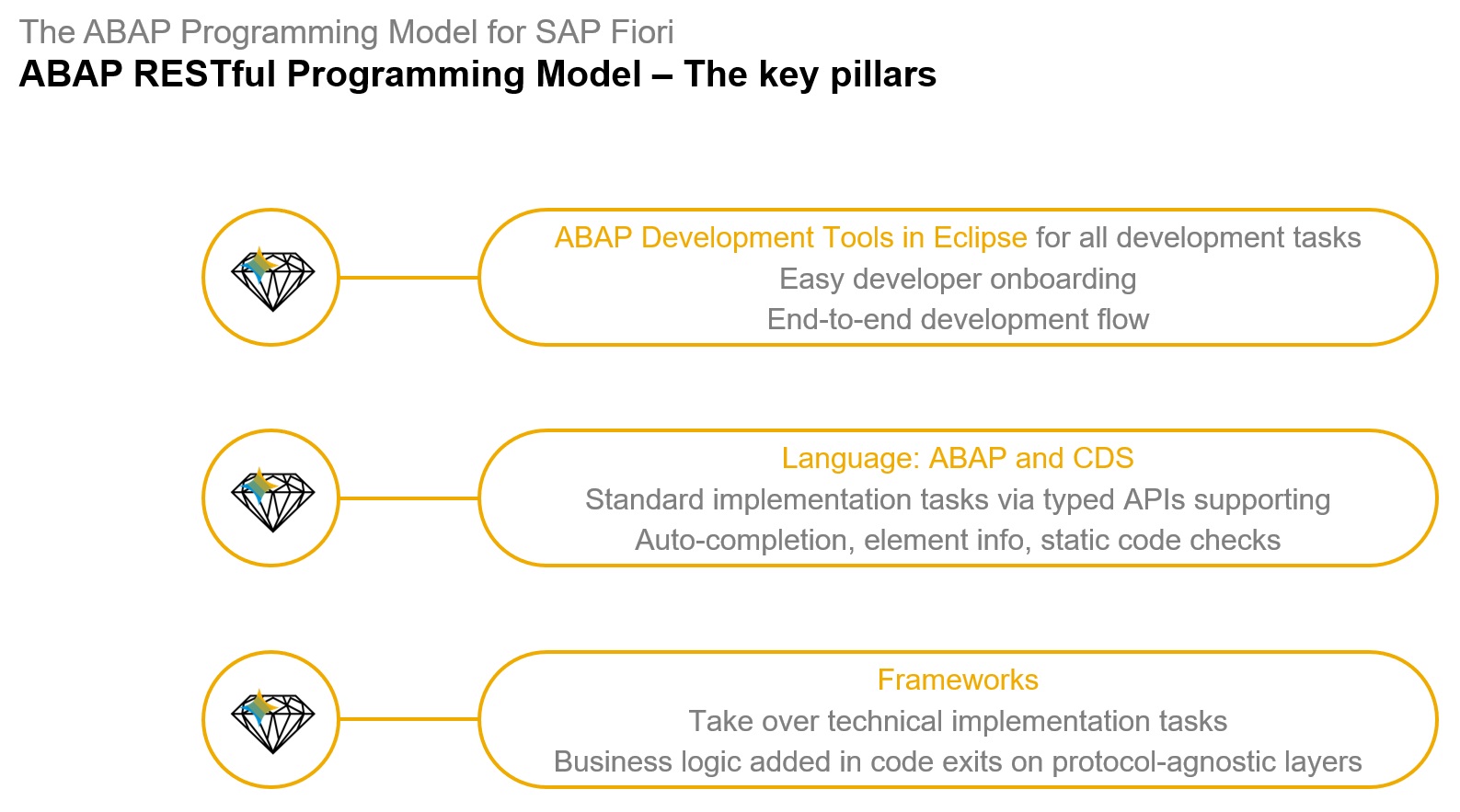 The focus of this shipment is on the use of queries (read-only apps) and the development of unmanaged transactional apps based on existing application logic:

With this new RESTful ABAP programming model, you can extend your existing SAP ABAP applications or develop new ones using state-of-art technologies.

But we know that sometimes customers prefer or need to use different programming languages, tools and/or frameworks… that’s why SAP is also offering a new programming model, The SAP Cloud Application Programming Model (CAP) which is an open and opinionated, framework of languages, libraries, and tools for building enterprise-grade services and cloud native applications.

The SAP Cloud Application Programming model (CAP) is also based on Core Data Services (CDS) like the RESTful ABAP programming model (RAP) but offers support for JAVA and node.js and it’s more flexible to integrate additional frameworks, libraries and tools.

It’s interesting to note the conceptual similarities between the Cloud Platform Application Programming Model (or CAP) and the Restful ABAP Programming Model (RAP). Both are based on CDS (Core Data Services) but in the CAP are implemented on Java or Node.js instead of ABAP… let’s see what are the preferences of the SAP ecosystem and programmers in the next years.

If you want to know more about the similarities and differences between these 2 programming models (CAP vs RAP) please have a look at these links:

In the next blog post I will talk about the new features and tools introduced by SAP for the systems administrators to simplify the administration tasks and reduce the TCO of the SAP solutions.

This is the blog part 2 of the 4 blog posts regarding what is new on the ABAP Platform:

Great. Thanks very much.

Thanks for sharing detailed info about new SAP Programing Models.?

”The focus of this shipment is on the use of queries (read-only apps) and the development of unmanaged transactional apps based on existing application logic:”

Assk here,what does mean here unmanaged transactional apps and how that differs with existing programming model.

thanks for sharing this information. As mentioned, S/4HANA on premise 1909 has a limited scope, as it doesn't offer the managed business objects. Looking through the roadmap explorer for abap platform, I couldn't find any info if this feature will become available for onPrem with the next release. Do you have any infos on that?