All you need to know about the SAP BusinessObjects ONE Uninstaller

“Are you BI Administrator managing the BI system undergone multiple updates having large history of minor release(s) or Service Pack(s) and/or Patch(es) and thinking how to get rid of these obsolete intermediate versions of the BI packages?”

“And having challenges manage the ever growing footprint (size on hard disk) of the BI deployment and observing update installations take longer time for the initial screen to launch?”

Then this blog is for you and you need to consider the “SAP BusinessObjects ONE Uninstaller” tool to overcome the above mentioned challenges.

Wondering what is this tool and how to use this, let’s see what it is.

SAP BusinessObjects ONE Uninstaller is an interactive lightweight command line tool, written in java as an executable jar. Using this tool, you can optimize the footprint of BI packages installed in your BI system. This tool enables the removal of redundant/obsolete intermediate versions like Service Pack(s) and Patch(es) without following traditional uninstallation process.

So what are the Benefits of using this tool?

How to get the ONE Uninstaller tool:

Note: <BI_Install_Dir> is the path of the installation directory where in which the BI suite of package(s) installed.

Smart features of this tool are:

Important Points to consider and remember:

Let us see some use cases:

Use Case 1 – Simple Standalone BI platform deployment with only one intermediate version.

BI platform stand alone installation with only one Intermediate version

In this scenario, as we can see, BI system contains only BI platform server installation with base installation starting at BI 4.2 SP3 and after that two updates to it. Hence the intermediate version is only one i.e. BI 4.2 SP04.

That means total three operations you need to perform just to get rid of one intermediate version. And not only that it requires to bring the system down hence during these operations system will not be available, so, entire downtime.

Having said that you cannot simply uninstall the intermediate version as it is not the recommended way of uninstallation.

But if you use this ONE Uninstaller tool, then definitely it is safe to uninstall the intermediate version without following the above mentioned traditional process. And also with no downtime. And with this tool it finishes the uninstallation approximately ~5 mins., no way comparison to the normal uninstallation.

Use Case 2 – Standalone BI deployment with multiple products and add-on.

When BI Administrator planning for the next update there is a blocker for the same due to insufficient disk space and observed that update installer took longer time to launch.

Then BI Administrator executes the “SAP BusinessObjects ONE Uninstaller” tool and successfully resolves the blocker and also observes that after the successful uninstallation of obsolete intermediate versions update installer took less time to launch in comparison. 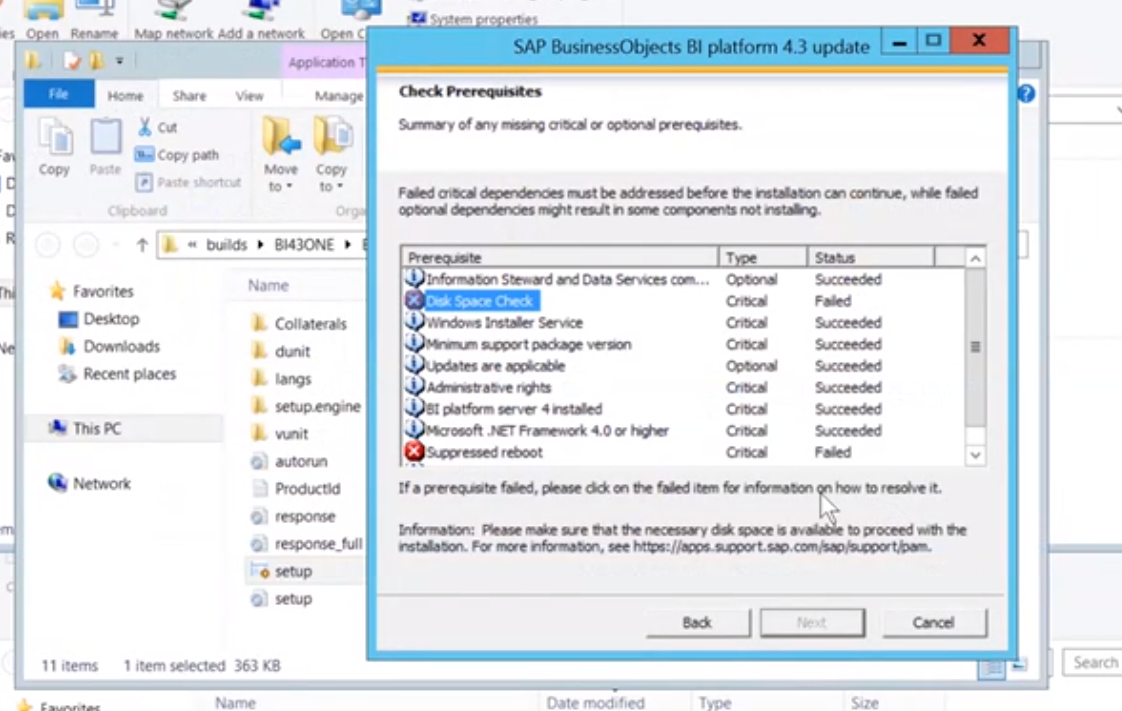 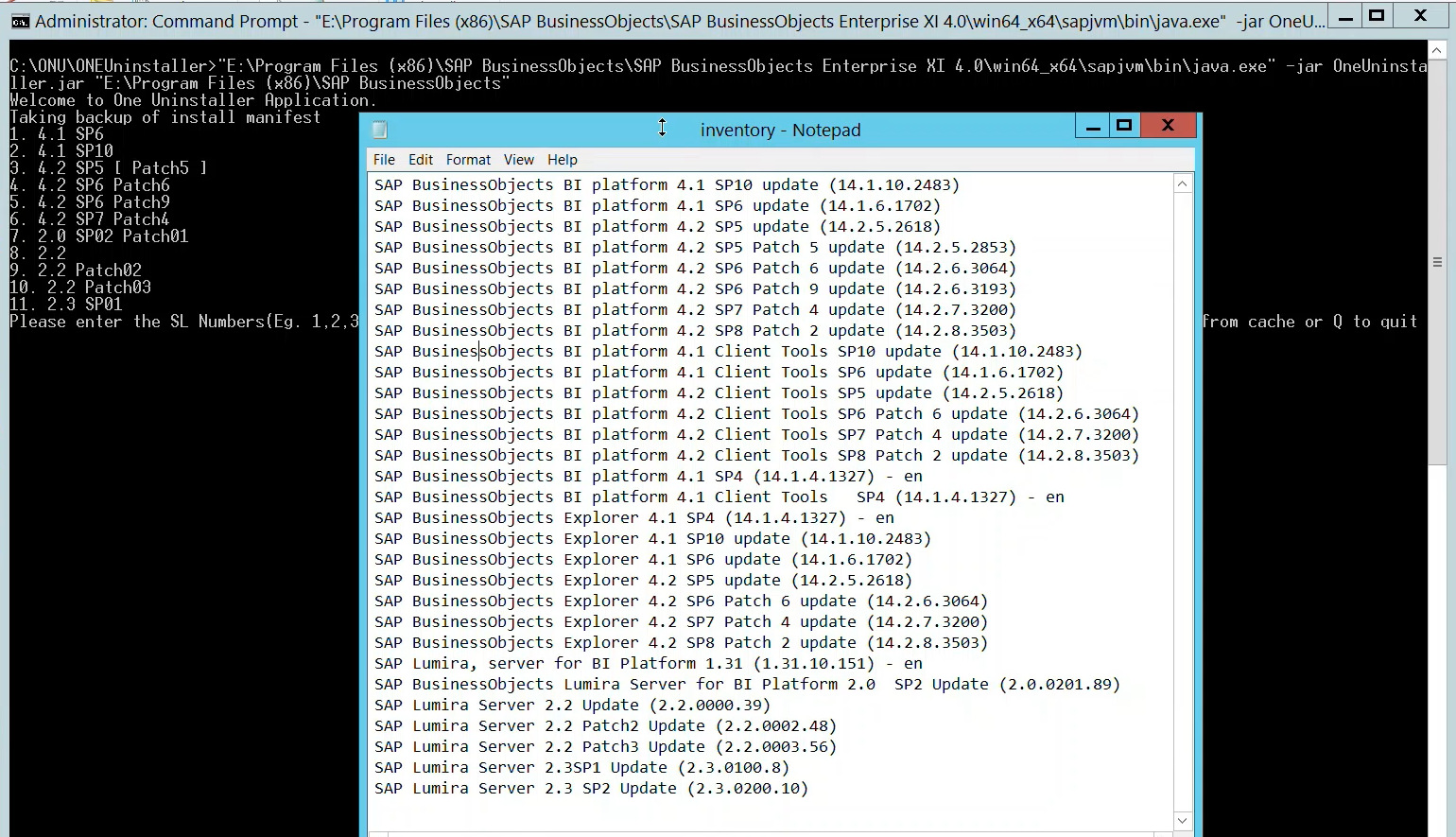 BI Suite of packages installed in the system and the obsolete versions suggested.

All Obsolete Intermediate Versions Suggested for uninstallation were selected. 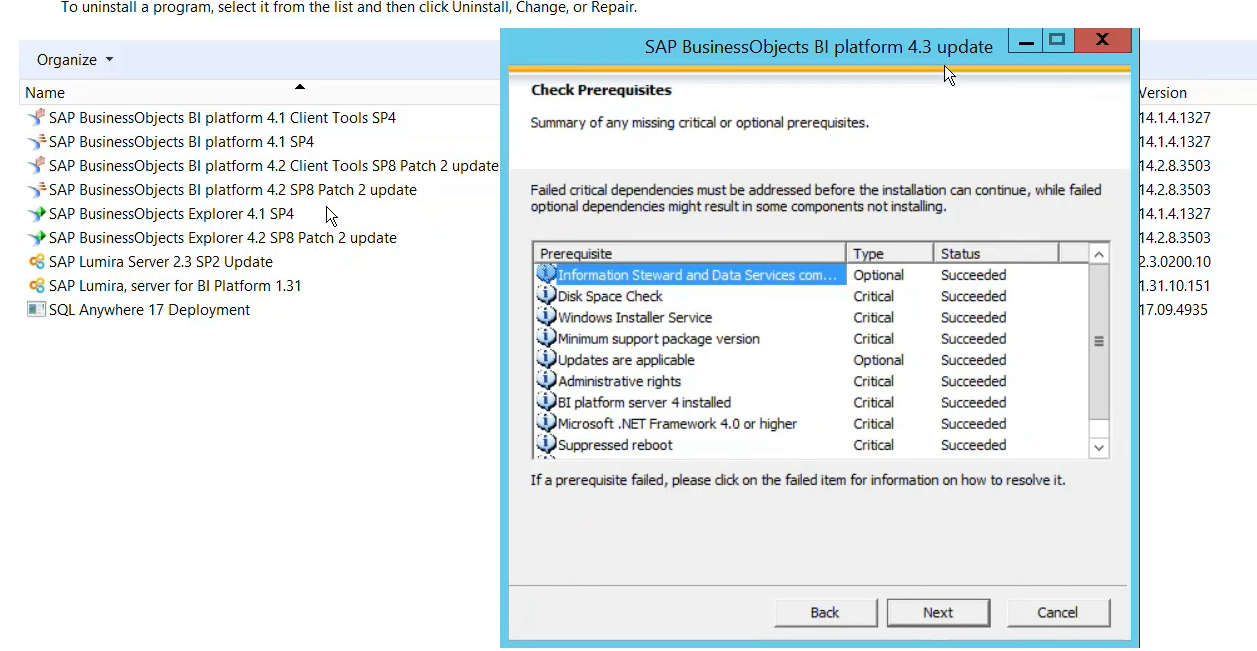 In this scenario, tool uninstalled the 11 versions of different products in about ~20 min. time in a single iteration.

Another Example BI system similar to what is explained in Use case 2.

Use Case 3 – No Intermediate versions available for uninstallation 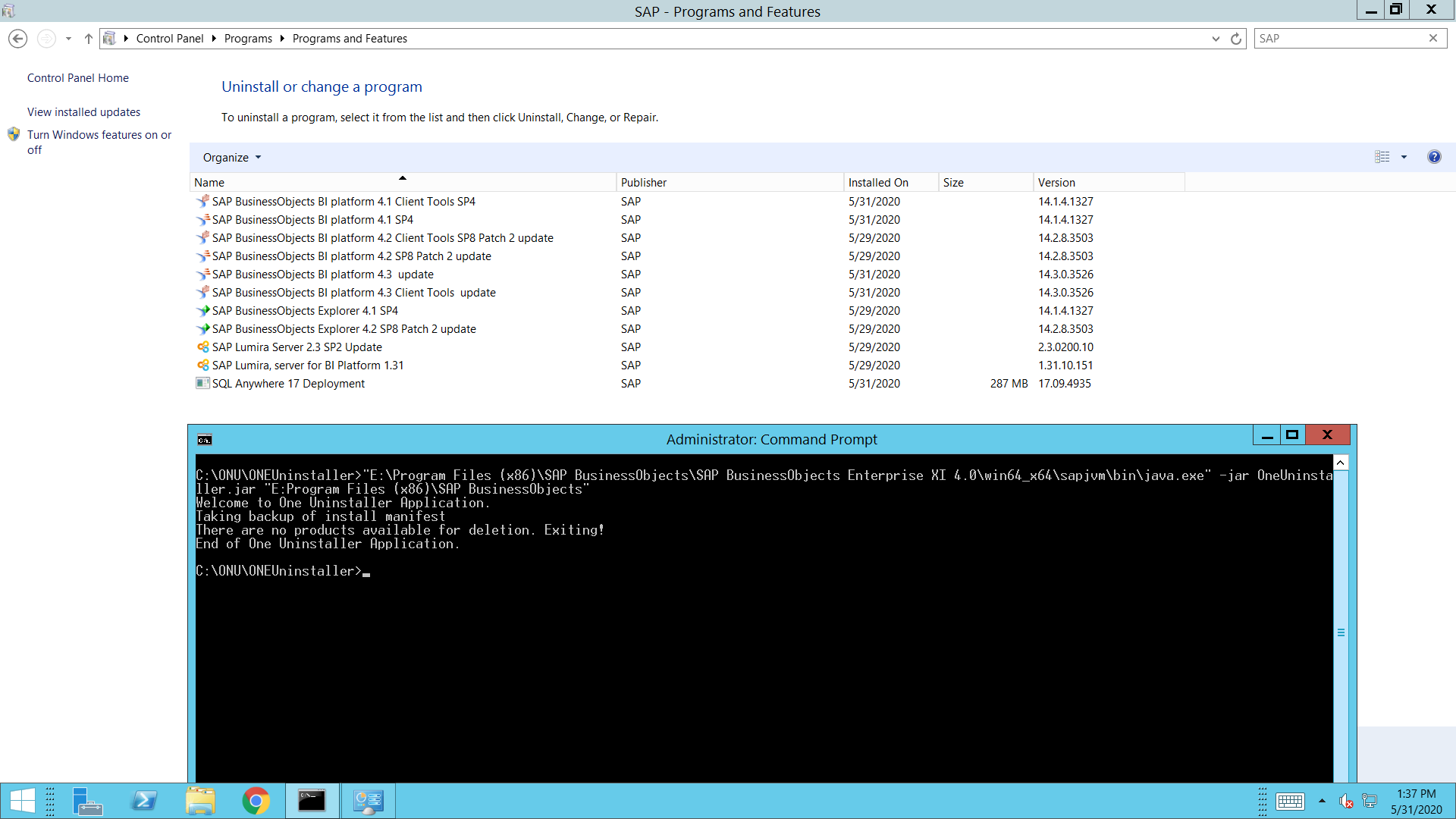 Wondering why Intermediate version not being suggested for uninstallation

This way this tool is very cautious about calculating the intermediate versions for uninstallation.

Hope this helps. Happy cleaning and welcome to the optimized BI system with respect to disk space footprint.

For full list of new features and enhancements Please read my blog on the same “SAP BusinessObjects BI 4.3 : What’s New“.

For Information related to all releases and to know how the tool evolved, refer the table available at the end of the Note 2846512

Great stuff. Looking forward many more to come along with BI 4.3

The SAP Note/KBA you were trying to reach is currently being created and has not yet been released.

When will the note be released?

Note will be released hopefully by today, it is under review currently.

Thanks and Regards, Venkat.

You should be able to access now, check it let us know, if you still face any issues.

Thanks Venkat. This will be a great tool for BI administrators looking to free up disc space on existing systems and cleaner/faster installs.

fyi. the note is released now.

The manifest file is 9.4MB!

Can you share the list of BI Suite of product versions installed by sharing the screenshot from Add/Remove programs and also share the contents of Inventory.txt from InstallData folder under installation directory. So that we can review and suggest why the tool suggesting as nothing to remove.

Thanks for the quick reply Venkateswara Y Guptha

Products on my VM:

After analyzing the shared Install history of BI Suite of Products and other SAP packages,

So, coming to the packages captured in inventory.txt, and analyse the list, we can represent the same in the tabular format for easy inference :

If we leave aside the two non BI Suite release add-ons (i.e. “Lumira Server” and “Analysis Office for BI Platform”, which will have different release cycles) as the versions for these are single and does not have any other history, so there is no case of obsolete intermediate versions for these two packages.

So to do a proper cleanup of intermediate (obsolete) versions in this machine, you can perform the following steps:

Note: Step 1 and Step 2 need to be performed only after reviewing the relevant Notes related to those Products mentioned in the Note https://launchpad.support.sap.com/#/notes/2801797

Let me know, if you still face any problem, ideally after performing Step 1 & 2, tool should suggest BI 4.2 SP08 as removable version.

If in case if it is still not suggesting means, we need to analyse either because of Lumira Server add-on or AOffice add-on dependencies with BI platform can be blocking that version to delete. But I believe it should not be the case, Let us know the result.

This is what I have done now:

Please perform the prescribed steps in the order as mentioned in my previous reply.

And I have explained why you we need to perform step 2 (i.e. removal of Explorer product) please refer my previous reply fully again.

And after performing the steps as prescribed, please let me know here.

Right I did miss that step... Just one line stating this would have been enough.

I have manually uninstalled Explorer 4.2 SP07 and SP08.  Then launched the One Uninstaller. 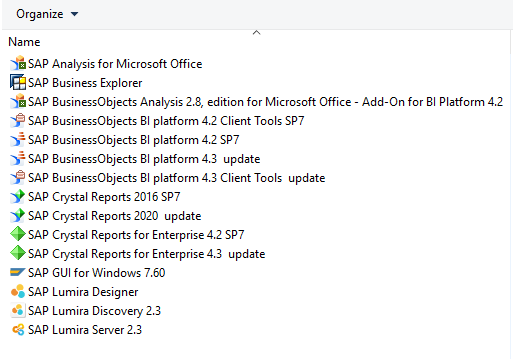 It did not update the inventory.txt

This is not a solution I will be testing any longer or using in a real life.  Seems like a black box doing half of what you would expect.  Leaving things behind.  Who knows what else is going on.

I don't see why it can't delete Explorer and Dashboard as it's pointless if you have BI 4.3

I discussed this in my BI 4.3 Upgrade Blog, in my opinion a side by side upgrade seems to be the only real thing to do and avoid risks steps like these.

It seems there may be some misunderstanding as to what this tool does. It will remove only obsolete packages and patches. This is to help prevent a long standing issue whereby customers installs take longer than they should, and a lot of disk space is used, because they have a large patch history.

It will not remove base versions (SP07 in your case) or current versions (4.3) because as you noticed, base versions are required for modify / repair actions. This is expected behaviour.

Inventory.txt version removal by the tool is an enhancement request that's on the list. Perhaps removal of Explorer and Dashboards after upgrade to 4.3 is also something we could have as a planned enhancement.

I assume 4.2 SP07 was not removed by the tool (as expected) and instead you were able to uninstall 4.2 SP07 manually? Thereby losing the ability to run a modify or repair (since 4.2 SP07 was the base version). If this is the case please confirm. Manual uninstallation of base versions should be something we prevent, and that's something we might need to look in to if you were able to do this.

I think it should be mentioned that a full binary backup or vm snapshot should be taken prior to running this, as well as CMS/FRS backups.

Thanks a lot Denis for bringing this point. I have included this in the Important Notes section in the blog and will do the same in the Note as well.

I’ve tried to run this on our DEV system and got the following error:

And from the logfile:

We currently have 4.3 installed, is it not compatible with 4.3 yet?

There is a known bug in the current version of the OneUninstaller.

Development are actively working on it and it's tracked in the below SAP Note:
2951139 - ONE Uninstaller fails with NumberFormatException when a hotfix is present

The fixed versions will be released there once available.

I see, thanks Graham!

After first succeed clean now i get error:

Thanks for reporting this here, not sure whether you already reported this by raising the incident to SAP, if so, let me know the details of the same.

if not, let us know the details of exact scenario, in which you identified the above issue.

I reported this issue to SAP.

Resolution: edit InstallManifest.sqlite and change 0 to 1 in "commited" column. 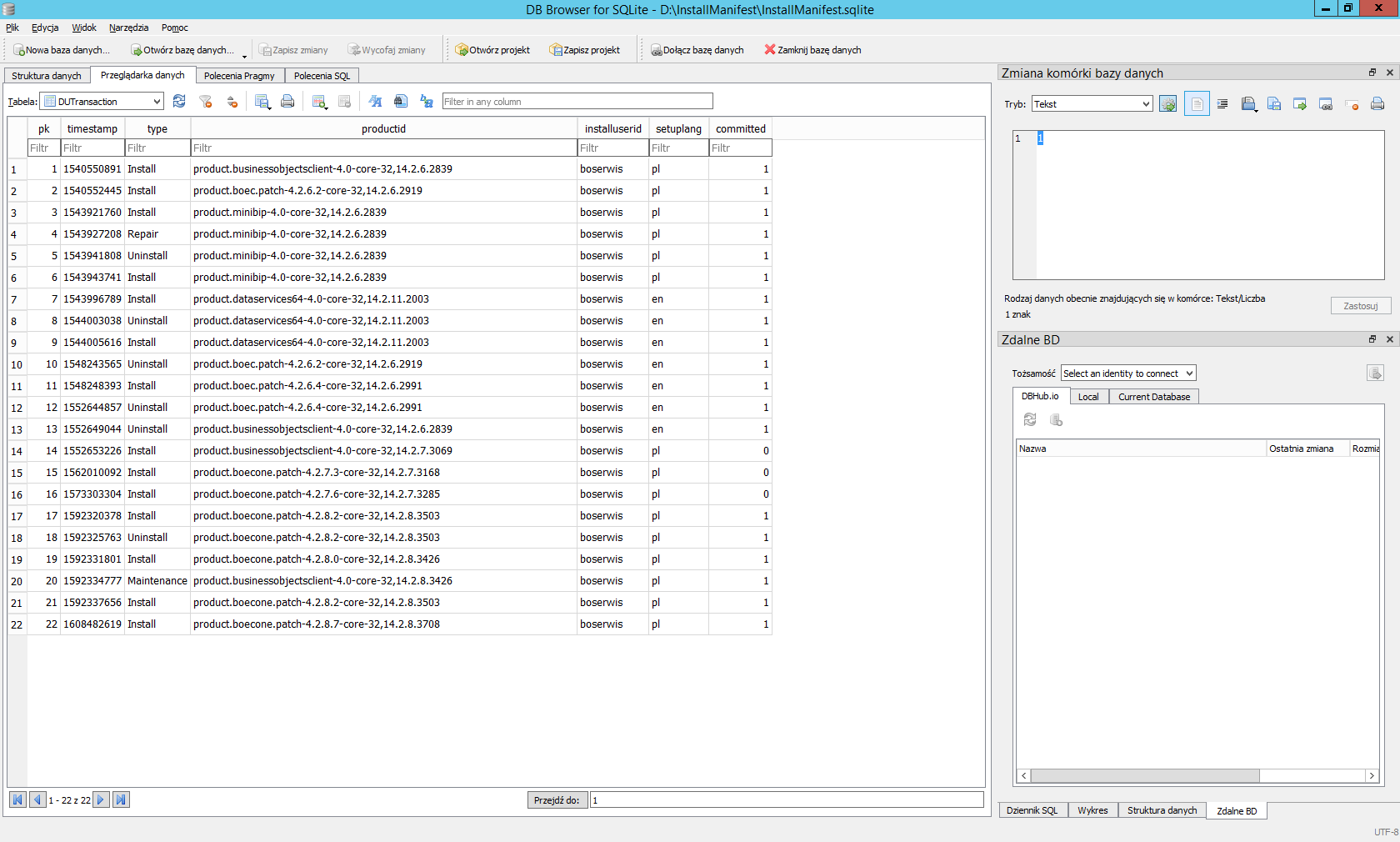 For reference it took 31 minutes to remove 7 intermediate patches etc.

New version is uploaded 2846512, which includes the fix for HotFix related issue and other issues reported so far, captured in the following blogs blog-for-v1.00.003 and blog-for-v1.01.000.

New version is uploaded 2846512, it is first major release of this tool after it got introduced. Introducing v2.0. Now you can launch this tool remotely and also gather information from a remote machine.