As technical architect, I am often asked about the latest news in the technical area of SAP S/4HANA. In these 4 blog posts I would like to review the main changes and innovations that SAP have introduced in the last years to explain the evolution SAP Netweaver platform  towards the new ABAP platform from a technical perspective.

The SAP kernel is the core component of any SAP system. It consists of the executable files that run on the server to handle connections to the system and execute the SAP programs.

The development of the SAP kernel started in 1988, although SAP R/3 was officially launched in 1992. The SAP kernel has been the foundation for almost all SAP products in the last 30 years.

Over the years, the kernel and the basis layer evolved. Adding support for more databases and operating systems but also adding more functionality.

One of the first important changes were done in 2002 with SAP R/3 4.7 and the inclusion of the SAP Web Application Server. It was the .COM era and SAP Kernel was extended with the Internet Communication Manager (ICM) and Internet Transaction Server (ITS) to be able to manage HTTP connections and provide support for XML, BSP and JAVA.

SAP NetWeaver was released in 2004 as a technology stack that allowed organizations to integrate data, business processes, elements and more from a variety of sources into unified SAP environments using a common technology platform. For the last 16 years, SAP NetWeaver has been the technical foundation for the SAP applications. 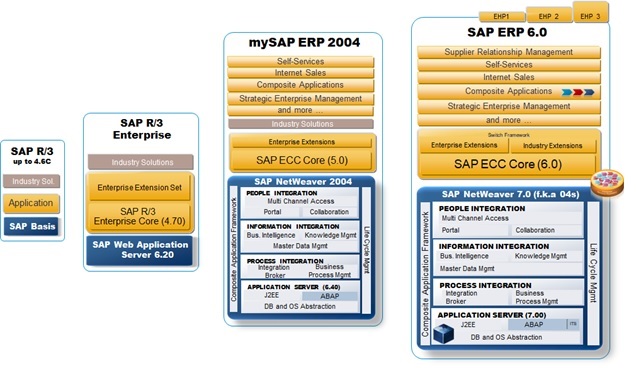 Evolution of the SAP Basis and SAP Netweaver

In 2008, SAP released the SAP Business ByDesign, the first SaaS product developed by SAP. After 20 years, a major renovation was needed as the SAP R/3 Kernel code was huge and complex, so a new kernel was developed, new ideas and improvements were implemented. Internally at SAP this new kernel was called Kernel 8.x and the project was called NGAP Next Generation Platform.

Obviously, SAP HANA deserves a special mention in the evolution and modernization of the SAP products. Although SAP HANA was officially launched in 2011, the first SAP ERP 6.0 version compatible with SAP HANA was launched in 2014 based on SAP Netweaver 7.40 SP02. Many new ideas and improvements implemented in the SAP Kernel 8.x were down ported to the SAP kernel 7.x line together with all the HANA and FIORI specific innovations.

SAP offers “innovation without disruption”, so the idea has been always to introduce new functionality but maintain as much as possible the backward compatibility to let customers adopt the technical (and business) innovations at their own pace.

If you have a look at the architecture of the SAP Business Suite and the underlying SAP Netweaver platform, you can see a perfect example of this “innovation without disruption” approach that makes SAP technology a solid platform to run complex business software. For more than 15 years, the evolution of the SAP Netweaver platform offered a solid foundation to adopt new technical innovations to our SAP Business Suite customers.

It’s important to remark that SAP NetWeaver is a product family consisting of more than just ABAP and Java Application Servers, it contains other components like the BI Content Extension, the Advanced Adapter Engine Extended, etc… and also contains the SAP Netweaver hubs such as Business Warehouse, Enterprise Portal or SAP Process Orchestration.

These 3 Application Server ABAP versions were still compatible (at kernel level) with the “old” SAP Netweaver versions used for SAP Business Suite products but delivered innovations for the ABAP stack in the following areas:

The new SAP_ABA software component is an important change, as the new SAP_ABA 7.5A,B,C contains changes in the field lengths, etc… needed for the S/4HANA simplification. As an example:

We cannot say that S/4HANA is based on SAP Netweaver (full product) as it is only based on one of the components (SAP Netweaver Application Server ABAP) and didn’t contain a JAVA stack nor the SAP Netweaver hubs (BW, Portal, PO)

If you are looking for a more detailed discussion about the main changes introduced in the Application Server ABAP 7.51 and 7.52, please check the following notes:

From SAP Netweaver AS ABAP to ABAP Platform

SAP NetWeaver Application Server for ABAP 7.52 is the last version of SAP Netweaver AS for ABAP, currently SAP has no plans to deliver additional SAP Netweaver AS ABAP versions although the existing Netweaver platform will be maintained until the end of 2030 as part of the SAP Business Suite end of maintenance policy.

Don’t get me wrong, the kernel 7.53 and the Application Server ABAP versions used as the foundation for S/4HANA 1511, 1610 and 1709 had many technical innovations and there has been also modernization of key components like the new Enqueue Server (ENSA2), support for HTTP/2 protocol and many internal changes to keep SAP as a modern platform to run your business. But the idea was to keep the compatibly as much as possible and allow a gradual transition for our customers: 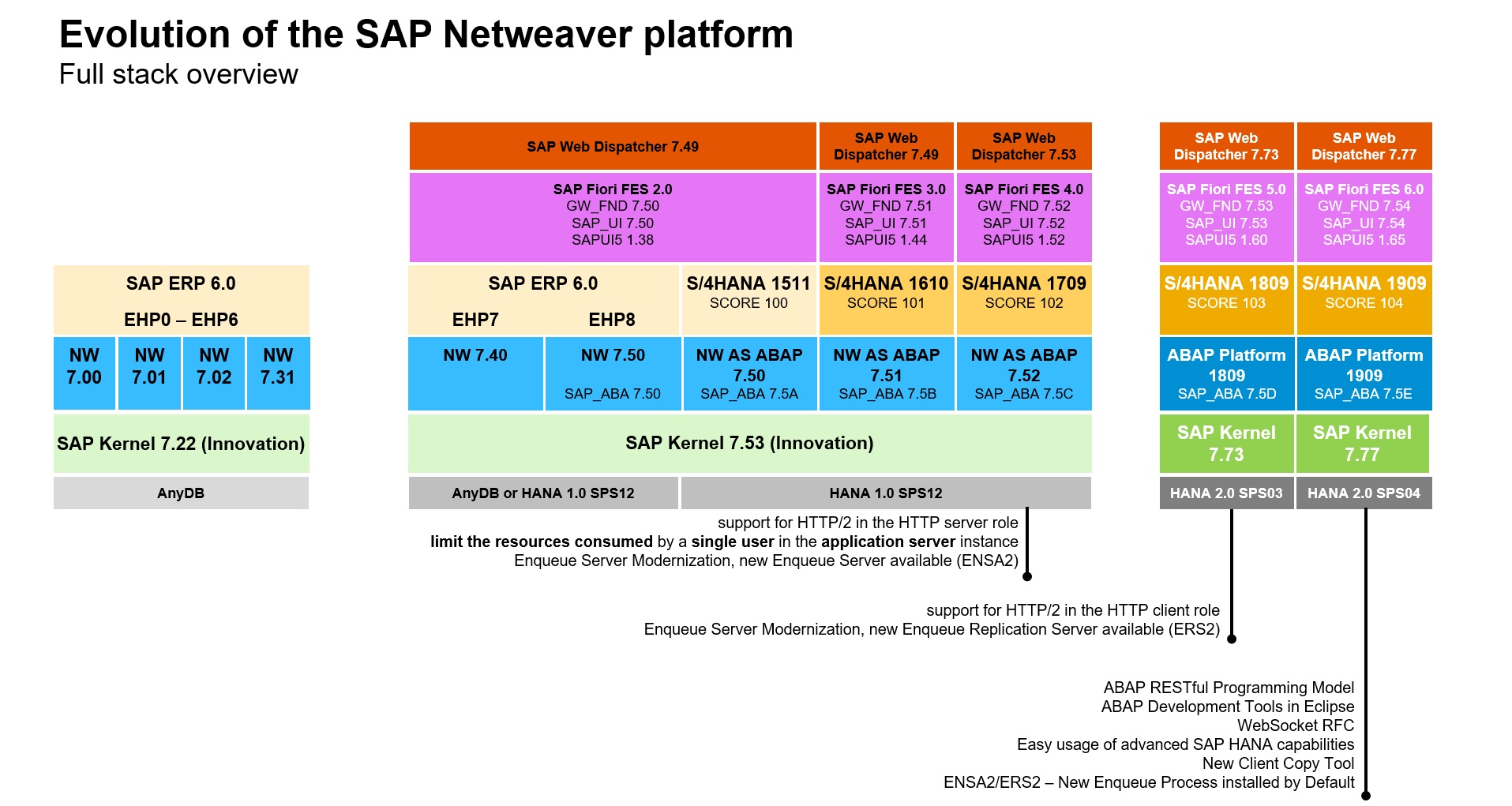 With SAP S/4HANA 1809 there is a big change, S/4HANA 1809 runs on top of the new ABAP Platform and it’s based in a new Kernel line (Kernel 7.7x) breaking the compatibility with the old kernel 7.53 used in the old SAP Netweaver systems.

ABAP Platform is the foundation for SAP S/4HANA and shipped as part of SAP S/4HANA, there will not be standalone versions.

Want to know more about the stack changes in 2020? Have  a look to Roland Kramer’s blog post: Upgrade to S/4HANA 2020 – Time to change

In my next 3 blog posts I will discuss in detail what are the main changes introduced by the ABAP platform in 2 different areas: programming and basis

You wrote that SAP Netweaver 7.52 is the last version of SAP Netweaver. Do you mean it for independent NW system only?

This is a common misconception, you have all the versions and components described in the figure “Evolution of SAP Netweaver towards ABAP Platform – Full stack view” at the end of the blog post but, for clarity, let me try to add some additional details:

Hope this clarify your doubts! Check all the details in the figure “Evolution of SAP Netweaver towards ABAP Platform – Full stack view”, there is a lot of detail there and require time to digest all the info.

Thanks for detailed explanations !

This doubt comes as earlier we believed often SAP_BASIS version said about NW too for most of the B Suites.(Seeking your thought here!).This looks fine for 1709 but not 1909.

Is there any way we can say if the system is build on SAP NW by seeing the software components only ? I'm  trying to connect 'components' with what is mentioned in 'product version'.

I know is very confusing, despite our best efforts at SAP sometimes we make things quite complicated…

Thanks for your time  Juan Tena

It’s confusing if even after seeing the software components we can’t say whether the product’s foundation is NW or not. And, to me this sounds more of jargon differences only.

Not sure if I am correct when I conclude it (ABAP Platform) saying old wine in new bottle.

I just updated the part3 of the blog post with a more detailed review of what is new in ABAP platform... have a look:

Eagerly waiting for the next blogs.

Thank you, I look forward to the next post.

Waiting for the next part eagerly.

The post is useful and informative. Look forward to the next one, thanks!

Great post Juan, on the first diagram was the stack on the right really called SAP ERP 6.0 ?  My understanding was ERP really only referred to the ECC 6.0 application. I never considered things like SEM as part of ERP. Shortly after ERP and mySAP ERP they moved to 'business suite' naming to collectively refer to ERP + SRM, CRM etc. but still not including items like SEM.

Minor semantic point, but just want to make sure I know what SAP mean whenever I see "SAP ERP 6.0"

Marketing made things quite complicated back then… Originally, SAP ECC was the technical successor of SAP R/3 Enterprise. However, marketing positioned not SAP ECC but SAP ERP as the successor. 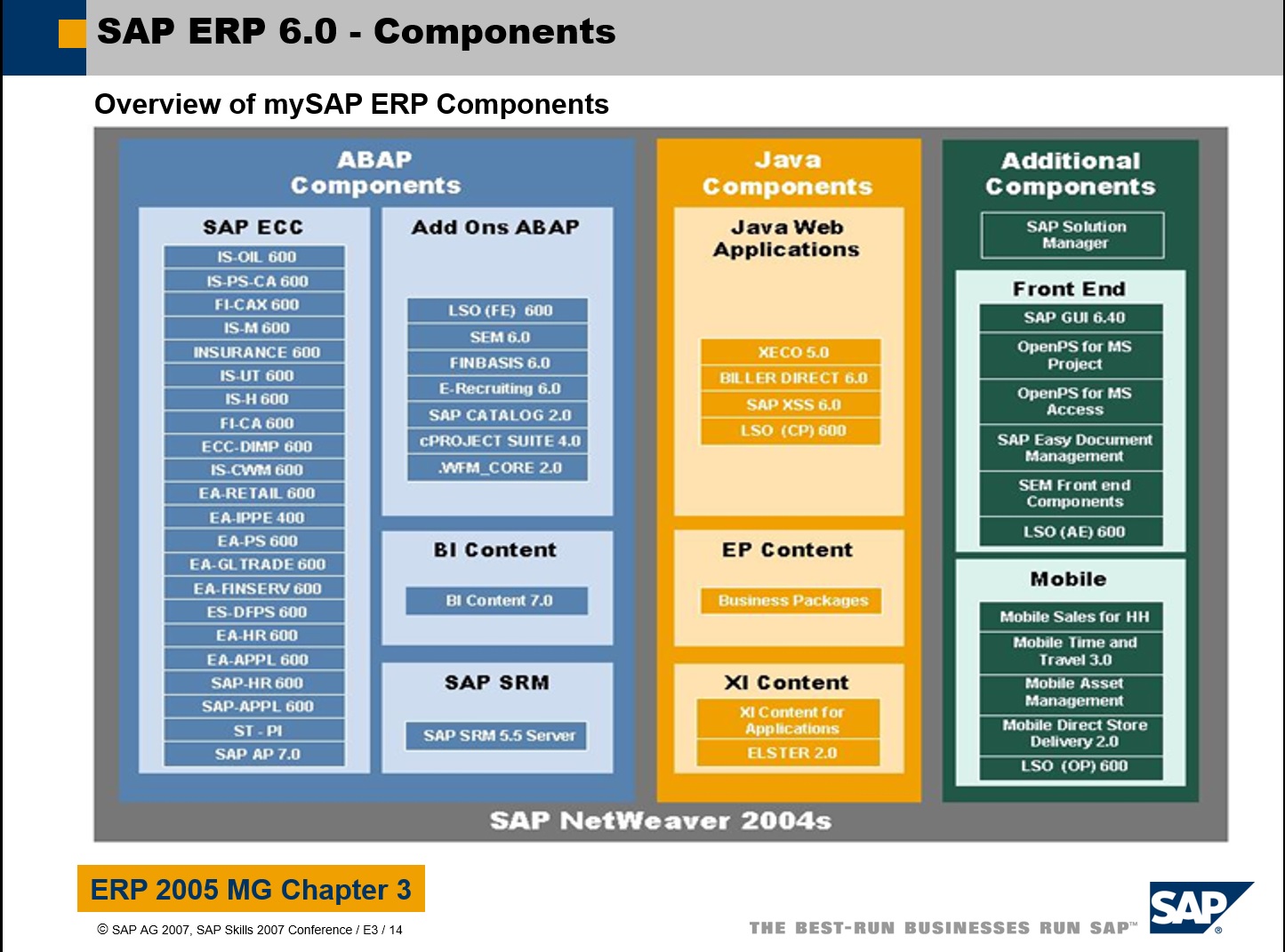 SAP ECC products were not shipped separately, were part of the SAP ERP. So, if someone talks about SAP ECC 5.0 / 6.0 then normally the main ABAP part / instance SAP ECC Server of SAP ERP is meant:

Hi Juan, Thanks for taking the time to reply and sharing the diagram and info. This plugs a gap in the way I understood things that makes it clearer now !

Great Blog, easy to understand by all the Journey of SAP-ABAP program.

Thanks for your clear and details given as above.

thanks a lot for providing this overview.
I am just a little confused about the following point you mentioned: 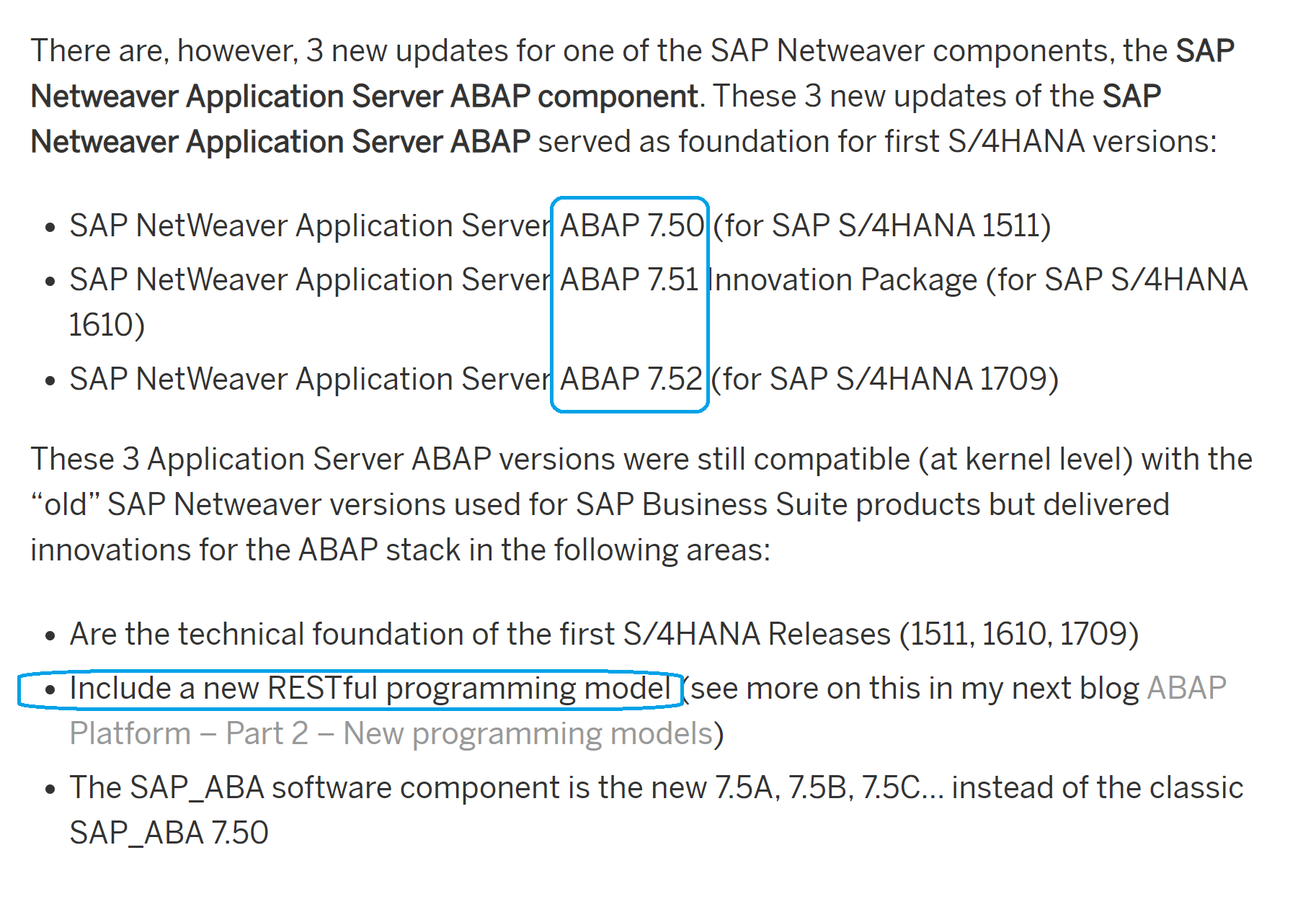 Your descriptions says that those application servers include the new RESTful programming model.

However the model is just available since ABAP Platform 1909 as far as I know.

Do you mean something different here (e.g. the ABAP Programming Model for SAP Fiori)?

You are absolutely right, nice catch! I have changed the wording as what I was trying to say is :

"the SAP NW AS ABAP 7.50, 7.51 and 7.52 introduces a new ABAP programming model for FIORI apps which is already based on Core Data Services and will be the foundation of the future ABAP Restful Programming model (see more on this in my next blog ABAP Platform – Part 2 – New programming models)"

Very nice overview, including history and good visualisation!
Also, I like how you explain stuff in detail and take care of using the exact terms.
I like it a lot, thanks!

Over the last few years, I have often used the SAP NetWeaver Dev Edition as a VM for trying out various proof-of-concept experiments. So what I hope to see, is that this kind of "POC Box" in a new incarnation as e.g. "ABAP Platform Dev Edition" could be made available.... maybe I will write a blog to let's say argue the case for such a move, after the summer holidays.

Thank you for the detailed explanation

One question: I was checking some exciting news regarding a new CDS entity type and it was mentioned it was available only on ABAP release 7.55 onwards.

Thanks Juan Tena for nice blog; it does clear some doubts around the technical components and  their releases. I however have a question on ABAP release. In below sentence from blog

In addition to that, from my understanding also SAP BW/4HANA is now based on the ABAP Platform.

Yes, you are right, even internally many times we use the wrong naming... old habits!

Nice catch and thanks for the feedback, I will check with my collagues to fix it.