This blog post is an overview of the detailed Git Integration and CI/CD Process guide.

When SAP Data Intelligence solutions are developed by several developers it is highly desirable to track the code in a Git repository. By this, changes can be traced and reviewed precisely and developers can organise their changes in commits and branches.

In this post we give an overview about how SAP Data Intelligence solutions can be developed using a Git repository (e.g., Enterprise GitHub available in the company). Moreover, we show how the solution can be packaged and tested by a CI/CD server.

This post in an overview of the detailed Git Integration and CI/CD Process guide for SAP Data Intelligence published on GitHub/SAP-samples.

The Git Workflow and CI/CD Process for SAP Data Intelligence has the following characteristics:

The following picture shows the basic setup and the actions of the Git Workflow and the CI/CD Process: 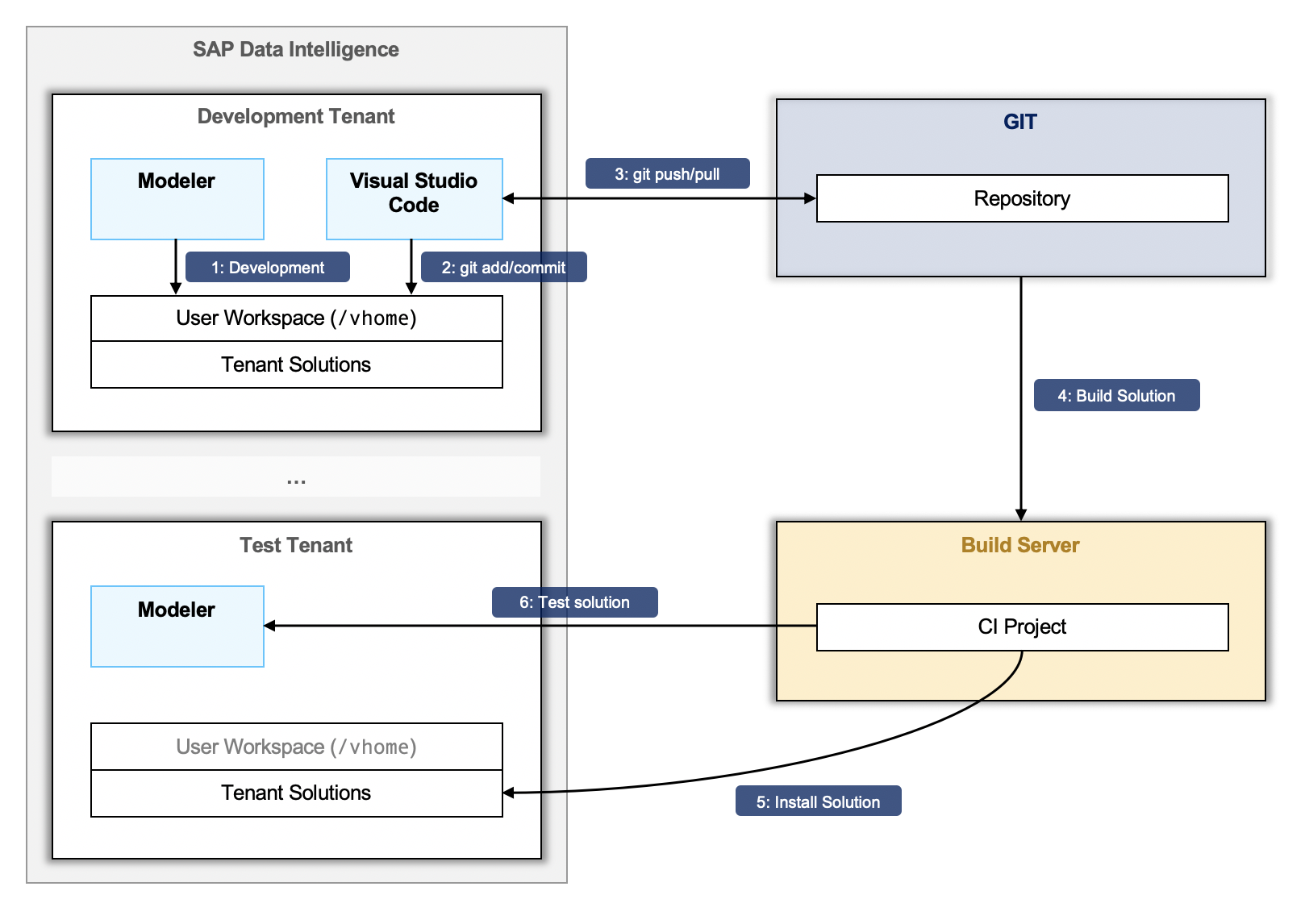 In order to connect the files in the user workspace to a Git repository, we need to have a Git client available on SAP Data Intelligence: 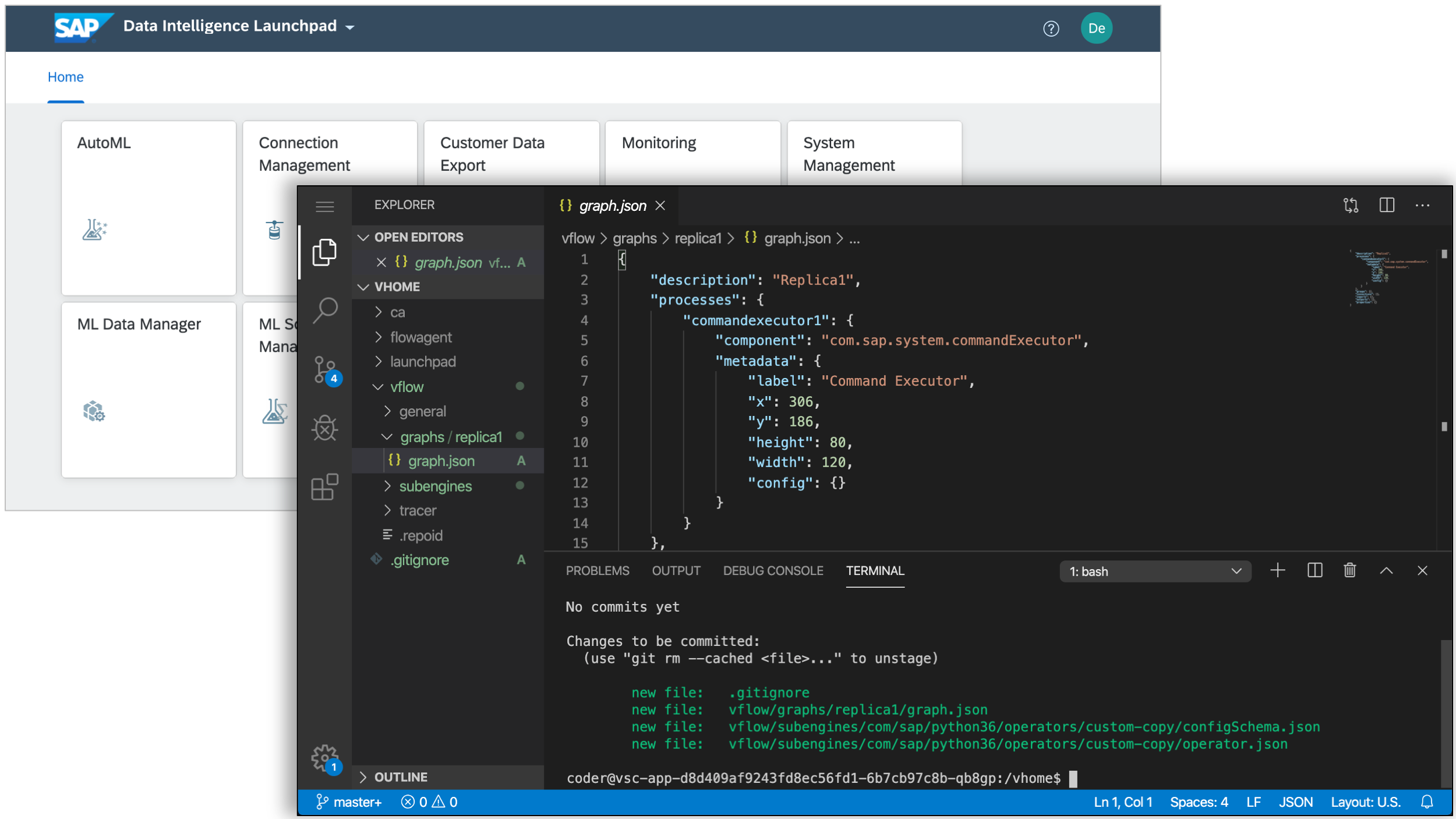 By working with the built-in terminal we can now easily use the Git client to connect the /vhome folder to a Git repository, and track changes of the files. The flow of Git commands looks as follows (for details check the Git Workflow section in the guide):

Once you have the solution tracked in Git you can easily use your existing build infrastructure to test the latest changes.

For this, we make use of the System Management Command-line Client (vctl) and SAP Data Intelligence Pipelines Operations API.

The following build steps can easily be implemented in build server (e.g., Jenkins). Helper scripts are available in the CI/CD section of the guide:

In the guide it is explained how to setup the CI/CD process using a Jenkins server.

This post gave a quick overview about how to realise a Git Workflow and a CI/CD process for SAP Data Intelligence solution development. Please check the details in the Git Integration and CI/CD Process guide and feel free to post questions, comments, and suggestions to this blog or open issues in the GitHub project.

Do you if it is possible to connect VSCode plug-in on DI Cloud with an on-prem GitLab through SAP Cloud Connector?

I got an error when add the solution to the strategy

regarding your error: On-prem you have to change some settings, for DI Cloud the solution is to open a ticken in launchpad.

"Our OPS team has changed some settings in your cluster to allow installation of third party application such as the VSCode application."

Hi Christian, thanks for the details.  this is very helpful.  we are just starting this journey.  one area we need direction is how to configure the graph/code created in our Dev Tenant to run against our targets (in/out bound), multiple QA tenants, Performance tenants and of course Production tenant.  configuration like sources and target systems, kafka topic names unique to the ecosystem, etc.  we are thinking to use a config file and jenkin scripting but is there a better way to approach this?

Thank you for very useful blog.

A customer, I’m working with, is running GitHub Enterprise (on-premise) for all the development and CI/CD. I need to connect Data Intelligence Cloud with GitHub on-premise.

I created GitHub connection in SAP Cloud Connector, which is assigned to BTP subaccount, where DI instance is. Obviously, it’s not enough. I think I need to tell vctl to go through Cloud Connector, but I have no idea how.

Please, could you help! I think other customers could face with this challenge.