Now that SAP announced that large events like SAPPHIRE and TechEd will be offered virtually instead of in person for the remainder of this year, I thought I’d share my experiences participating in Sharing Geoscience Online during the first week of May 2020. As some of you already know, I spend most of my spare time on climate change related topics and I sometimes go as far as using vacation time to participate in conferences, like I did in 2018 and 2019 to mingle with ~15,000 geoscientists in Vienna during the European Geosciences Union (EGU) General Assembly. A repeat was planned for this year, but due to COVID-19 the in-person meeting had of course to be cancelled and the organizers decided to replace it with an online event and Sharing Geoscience Online was born! I already wrote about the event for Skeptical Science and this blog post is based on those writings. It will contain some excerpts from those blog posts highlighting the various formats in which the content was brought online – some of which might also work for other conferences.

Participation in EGU2020: Sharing Geoscience Online didn’t require a separate registration or the payment of a registration fee. For uploads of presentation materials and commenting, authors and participants only needed to have a user account. This basically made all the presentation material open access and participating in the chat sessions or commenting on the presentations was free of charge and open to everybody interested! There’s a lot of information on the EGU-website of how this was pulled off (e.g. in the FAQs) – not an easy feat considering that about 18,000 abstracts had been submitted to 700 sessions!

During an on-premise conference these 700 sessions  would have come as orals, PICOs (very interesting format!) or posters but for this online-only event they only had chat-based sessions and every author could upload a “display” in almost any format as long as it wasn’t larger than 50MB. Most authors went with PDF-files of either their posters or presentations and some had uploaded a video- or audio-file. Each session was given a time-slot of 105 minutes which was then divided up among authors who had uploaded a display for the session. Depending on the number of uploads in a session, an author had between 4 (many uploads) to at most 10 (few uploads) minutes to briefly introduce their contribution and answer a few questions asked during the live chat. As you can imagine, these sessions could be pretty intense, especially if you hadn’t taken the time to at least glance through the presentations beforehand!

To prepare conveners and authors for what was to come, the organizers had put together a short recorded chat-demo on Youtube and it illustrates pretty well how these sessions were supposed to work. I had submitted an abstract about Skeptical Science and as luck would have it the session about Citizens Science Projects had been scheduled for Monday morning as one of the first sessions to kick off the conference! So, I hadn’t long to wait to see how this would work in real life! During the 2nd part of the chat-session, the presentation got called up at 11:45 and here is how it went within the 7 minutes allocated for it: 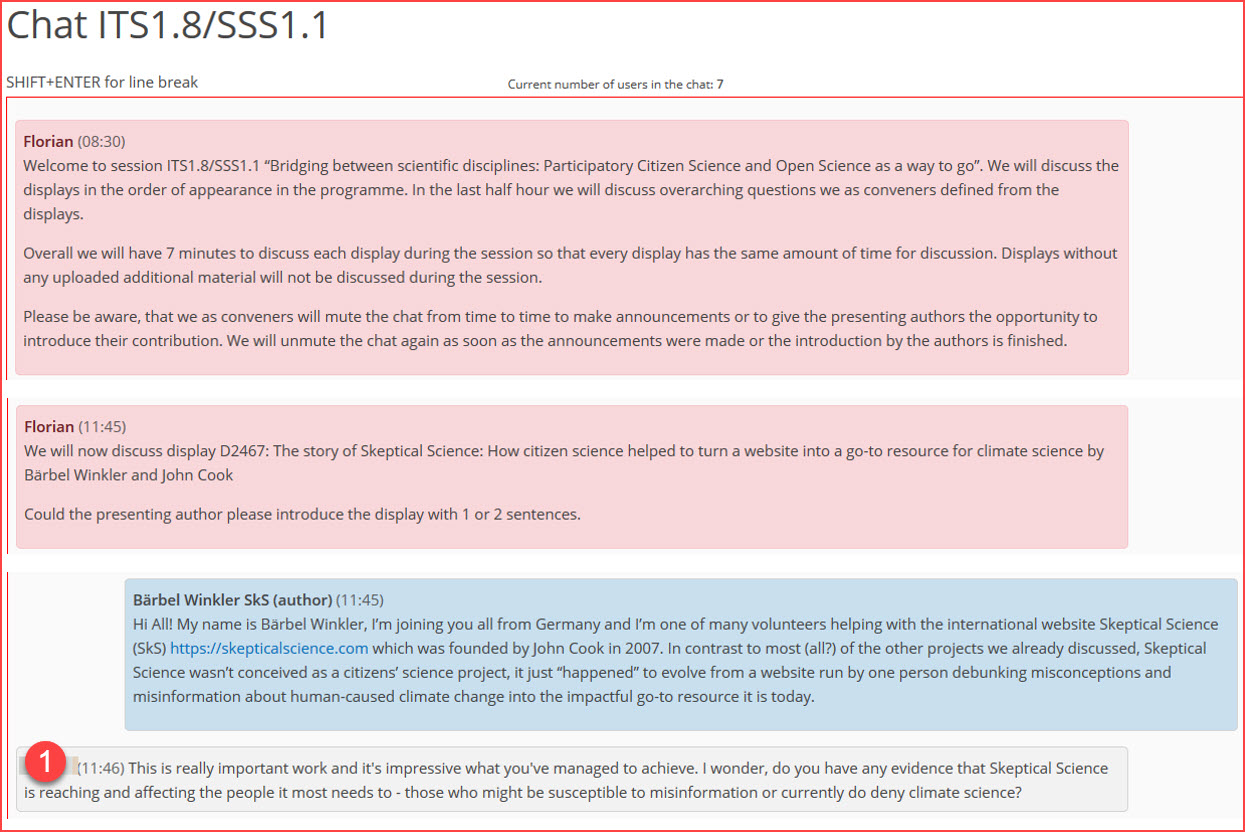 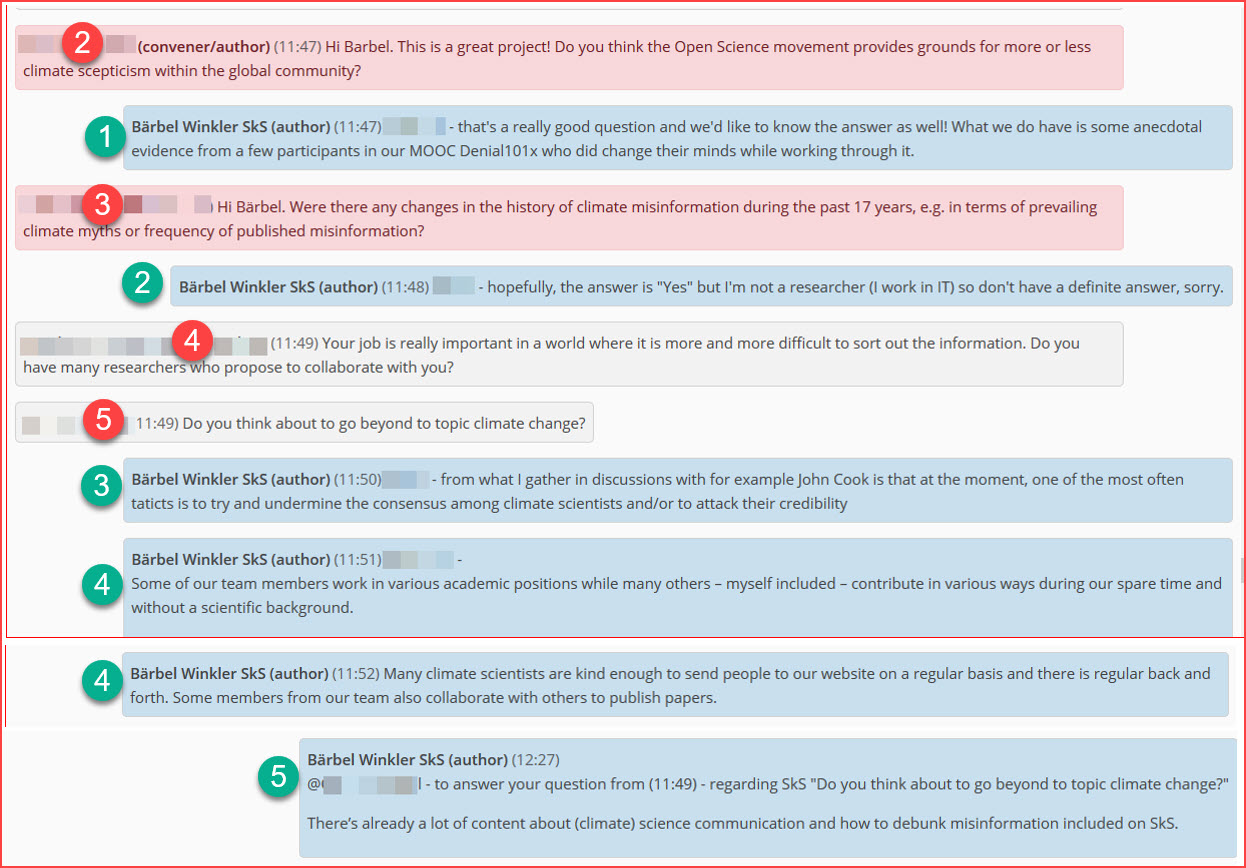 I masked all but the convener’s and my own name and numbered the questions (red) and answers (green) to make it easier to follow the “flow” and to give you an impression about how these chats worked. In case you’d like to know more about the session itself and which type of creative citizens science projects were presented, please check my detailed blog post on Skeptical Science.

Commenting on the displays

When uploading their displays, authors were encouraged to allow comments from other registered users in order to allow discussions about the presentations outside of the rather time-constraint chat sessions. This commenting was open from April 1 to May 31 so over a much longer period of time than the conference itself. These comments have been archived with the displays and just like them are open access. Here is an example for a short discussion I was involved with about “Your collective timeline of climate science history“: 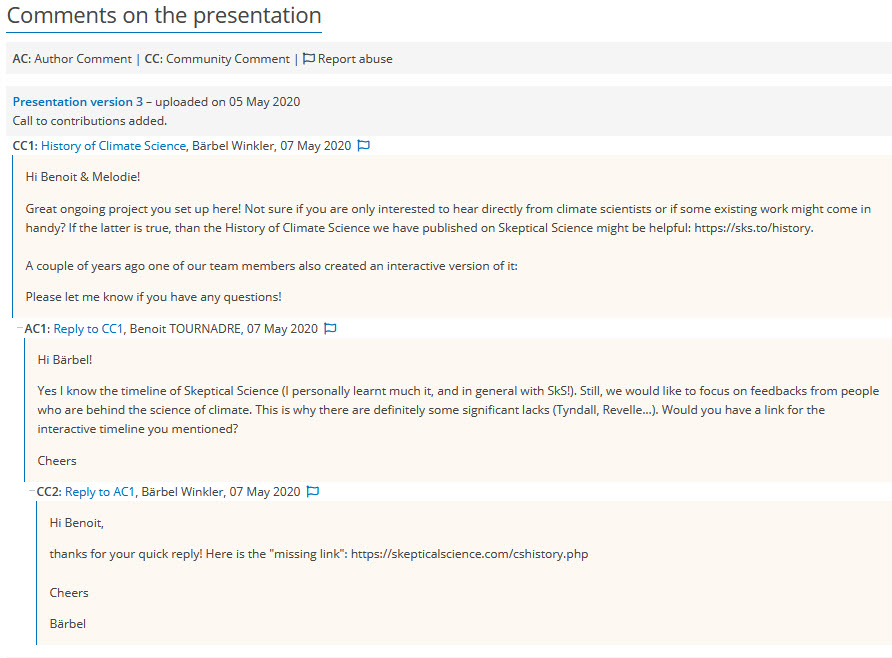 So, the bulk of this year’s EGU conference was held as chat sessions but the organizers also offered a mixture of live-streamed and recorded sessions in addition to a few press conferences. On average there were 2 to 3 such sessions each day and all of them are now freely available in a playlist on EGU’s Youtube channel.Here are a few mentions to give you a rough idea of what was shared that way – if you are interested in more, I put the sessions I watched into another blog post on Skeptical Science.

The Great Debate titled Cutting carbon in the geosciences: conference participation versus online streaming and fieldwork versus remote observations had been planned well in advance of the Corona pandemic but now couldn’t have been more topical! It may contain thoughts and ideas applicable to (online) conferences in general and not just ones related to (geo)sciences.

The Short Course “Science blogging for beginners“ contained helpful hints and suggestions for anybody interested in blogging (anybody reading this fits that bill?). With 36 minutes in length – not including the time for the exercise! – it’s well-worth watching or checking out the accompanying slides (and not just for scientists or newbie bloggers)!

Another Great Debate discussed “Values versus facts: should geoscience get personal?” with Stephan Lewandowsky (Chair in Cognitive Psychology at the University of Bristol with research focusing on misinformation, post-truth deception and climate change) as one and Laura Smillie (Policy Analyst, Joint Research Centre, EU Commission and Project Leader of the Enlightenment 2.0 initiative) as the other panelist. The session focused on what makes people believe fake news and misinformation and the impact that this has. After two short presentations the panelists discussed how researchers can communicate their research with people who reject traditional science narratives or when scientists should tap into their audiences’ emotions. Several questions from the audience were also discussed. This was a very topical session given the various conspiracy theories currently making the rounds related to COVID-19!

When it started on Monday May 4, 2020 I didn’t really have much of a clue how this year’s General Assembly of the European Geosciences Union would work out as Sharing Geoscience Online was one big experiment. Now that it’s over, the impressive numbers speak for themselves (I think): 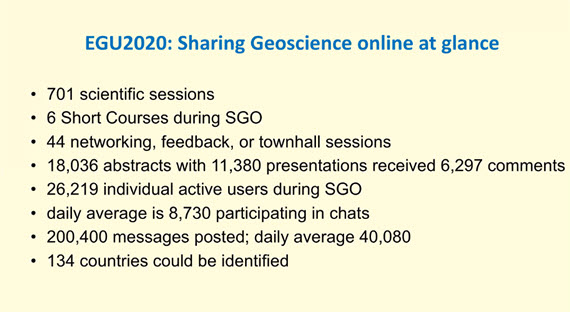 Granted, I didn’t participate as a scientist, just as a “science enthusiast” and science communicator so I obviously see this from a very different angle than an actual working scientist. But, I found it really amazing that the event’s organizers were able to change course mid-March after the program for the in person event in Vienna had already been finalized. They then only had about 6 weeks to re-shuffle everything, find and set up a typed chat-system, rework the presentation format to allow a display of almost any format to be uploaded with each accepted abstract, make commenting available for the displays, figure out which short courses could be delivered as pre-recorded webinars via YouTube (and actually produce them!), which other sessions could be live-streamed on Zoom and I don’t know how many other things! In addition to all that, they also had to put together and share “how-to” instructions of how this completely new and “cobbled together” conference system would work for organizers, conveners and attandees. My prolog post from mid-April provides some details about these preparations.

After participating the whole week and judging from the one-word reactions collected in a word cloud during the virtual EGU party on Friday evening (look for hashtag #shareEGUcelebrate on Twitter), this online conference can be considered a success – even if many participants lamented the missing personal interactions you get during an on-premise conference: 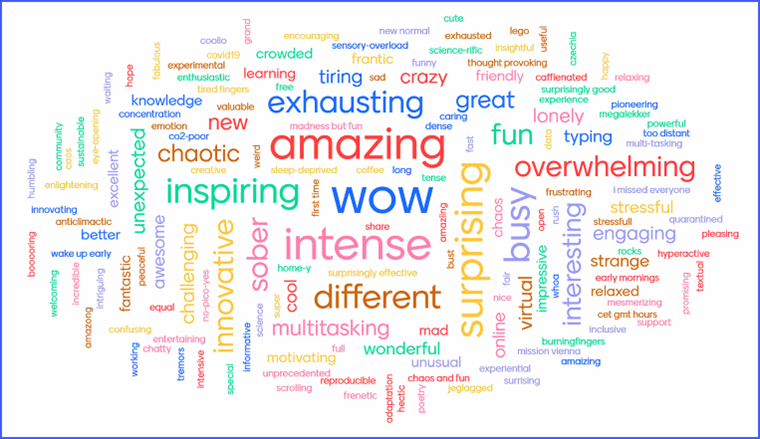 I’m already looking forward to seeing this year’s online TechEd take shape (perhaps even help a bit shaping it?)! I’m fairly certain that it can and will work out just as well as this large geoscience conference did although it’ll be very interesting to see how the hands-on bits and pieces of a TechEd can be adapted to an online format. But then, we already know that this can be done as recently demonstrated by the 24hours SAP Online Track event held on May 30/31!

If you have examples from online conferences you participated in please share how they worked for you in the comments.