Do you know the situation when you are working in different projects which different needs regarding your development setup? You need different versions of the same tooling or frameworks and depending on what project you are working on you have to switch back and forth. Or another scenario: You are working in a project with several developers and each developer has to setup the development instrastructure by its own on his/hers machine. A lot of time can be spent on that and always differences are appearing on the different machines, because not everyone keeps the machine up to date. Would it not be great to have an option to provide your development infrastructure with just some configuration files? Check out your code from the code repository and start developing without installing a lot of tools?

Visual Studio Code provides such options with the Remote Development Extensions. There are different options available:

Development in a Remote Container

Following I will focus on the option to develop with Remote Containers as this is an easy way to provide a consistent and isolated development environment independent from the operating system and central available systems. As the Remote Containers functionality uses Docker (Desktop), available for Linux, MacOS and Windows, everyone in your team is able to use that. In following the example I will show, how you can prepare and use a simple Remote Container development environment for UI5. This example is of course not “production ready”, but should give you a glimpse on the general setup. As pre-condition Docker (Desktop) and of course Visual Studio Code must be installed on your machine.

After installing the extension the Remote Explorer appears in Visual Studio Code.

The Remote Development Container is defined in a JSON file. At the root of the project a folder .devcontainer needs to be created containing a file devcontainer.json. In this example the file has following content.

The configuration values have following meaning:

Preparing the Docker file for the Remote Development Container

The Remote Development Container definition file references a Dockerfile, stored in the .devcontainer folder. The Dockerfile for this example has following content:

The Docker file uses as base the image mcr.microsoft.com/vscode/devcontainers/javascript-node:14, which is a pre-defined image for a Node.js Remote Development Container. The image is provided by Microsoft on Docker Hub. A list of available pre-defined Remote Container images can be found here on GitHub. The used image comes with a pre-defined set of installed tools like Node, NPM, Git, etc..

The last command installs Google Chrome in the container, to be able to do headless test executions.

After the file is created, the project structure looks like following:

After the preparations are done, go to the Remote Explorer, press the “+” button and select Open Current Folder in Container.

This starts the docker container (including the installation of all required remote extensions in the container).

In the lower right corner you see an information that the container is started.

By clicking on the information message, a terminal is openend in which you see the current log for the container creation.

After the creation is finished, it can be seen that we are in the Development Container in the lower left corner. Clicking on it allows you to switch to the local folder or to other containers.

Next enter yo easy-ui5 and answer the questions to create the UI5 application scaffold. Using the Yeoman generator is possible, as it was installed when the Docker image was created (according to our Dockerfile). For this demo I used following inputs for the Yeoman generator:

After the generation is done and all dependencies are installed, the application scaffold is ready to run. Enter npm run serve in the terminal to run the application. The npm script serves the application using the UI5 tooling. Enter http://localhost:8080/index.html in a browser on your local machine and following output appears. The port forwarding from the container to the local machine works.

To execute tests enter npm run test in the terminal. Before doing this, make sure that in the karma-ci.conf.js file the value of array property browers is set to ChromeHeadlessNoSandbox. At time of writing this, the Yeoman UI5 generator extension has a small bug which sets the value to ChromeHeadless, which leads to an error when it is tried to start the Chrome browser in a container. After changing the file (if necessary) and executing the command, the test execution should be successful. 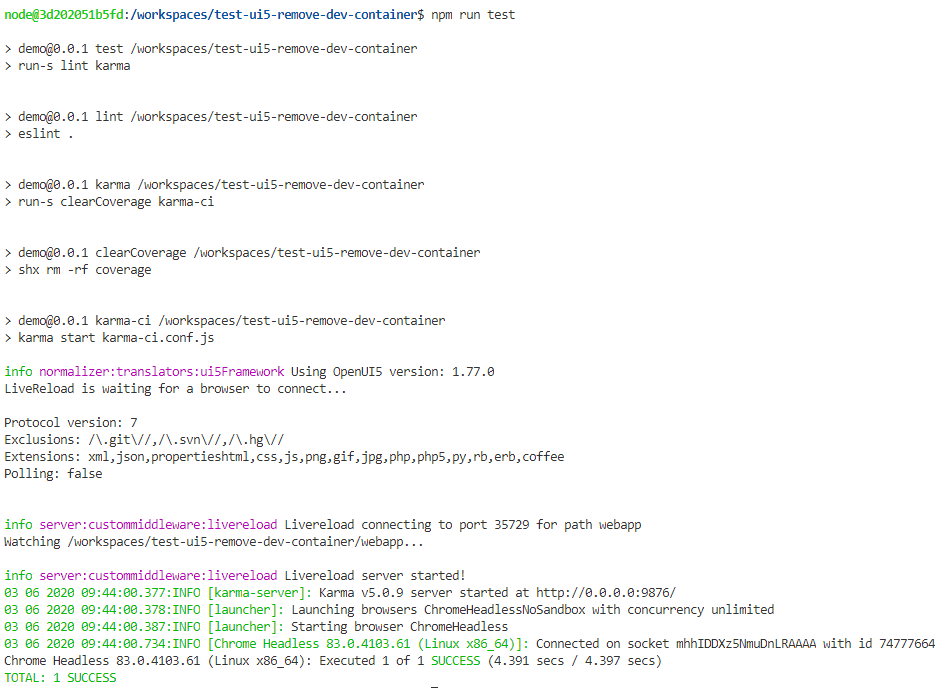 Instead of storing a Dockerfile in each repository, standard Docker images should be defined which can be used in the devcontainer.json file. With that it can be ensured, that every team member (or you alone) use the same image. This approach makes it also easier to update the image (and container) within a project. Just use the well-known tag approach for the Docker Images. The defined standard Docker images can be made visible for your developers by an Artifact Repository like e.g. Nexus or Microsoft Azure DevOps Artifacts.

Use Docker with WSL2 on Windows 10 Pro/Enterprise

I used Remote Containers on MacOS with Docker Desktop without issues too.

If the development container definition was changed (or your Dockerfile) a rebuild of the container is necessary. Normally Visual Studio Code recognizes changes in the devcontainer.json file automatically and asks for rebuilding. If not, you can trigger that manually in the Remote Explorer.

Use Docker Compose if it makes sense

Open your Git Repository directly in a container

When your Git Respository contains a development container definition, it is possible to directly open it in a container without cloning it to your local machine. This is possible via the Remote Explorer, using the option Open Repository in Container.

From my point of view Visual Studio Code Remote Container Development has a huge potential to save time and costs by providing consistent and isolated environments which can be used by every developer within a team or an organization (for instance as base for different projects). The approach can be applied for many different necessary environments, for Java Development, Node Development, Python Development … even development for serverless functionality (like e.g. for Microsoft Azure Functions).

In the area of UI5 I see a huge potential with the release of the SAP Fiori Tools which are not only provided in the SAP Business Application Studio, but as Visual Studio Code extension too. With that, it is easy to define a full-functional UI5 development environment which works locally too and can be started up in seconds.

Another case I see, is to set up a development image for developing applications using the SAP Cloud Application Progamming model. Based on that image (containing all relevant SAP CAP packages, SQLite, etc.), here a standard development environment can be provided in seconds for every developer who wants to use it.

In this post I focused on the Remote Container Development on a local machine, not considering the other above mentioned Remote Development options and other options for Remote Containers. E.g. remote containers can be executed on a K8S cluster too. I also like the approach of Visual Studio Codespaces (managed or self-hosted) which would allow me to develop just in a browser on my iPad Pro connected to an external display, keyboard and mouse.

What do you think? Are you already using Visual Studio Code Remote development features. Share your experiences in the comments.

nice example indeed. Were you referring in your Intro section with managed "CodeSpaces" to Visual Studio Code Online? Having VSC browser-based next to WebIDE/Business App Studio are quite powerful combinations I think.

The code space is provisioned on demand and can be distributed to external developers or the likes to immediately start coding without any rampup. What do you think?

There are a lot of scenarios for which this can be used in a very ypowerful way.