In the blog post S/4HANA Extensibility Concept Details: Restricted ABAP  I introduced the concept of restricted ABAP, or naming it correctly: ABAP language versions. Initially it was introduced for the usage in the key user editor in SAP S/4HANA Cloud. With SAP BTP ABAP Environment (aka Steampunk https://blogs.sap.com/2019/08/20/its-steampunk-now/ ) a second  use case was introduced. In this blog post, I want to spend some words about this use case.

First, let me recap the basics of the concept of ABAP language versions (for more details read my previous post):

The concept is built of two pillars:

The ABAP language version is a property of the ABAP object, and so is independent of the used editor. This means, if you set a ABAP language version to, lets say “ABAP for Key Users” the syntax restrictions and release checks are executed an any case – whether you use the Web editor in the Fiori app Custom Fields and Logic, the Eclipse-based editor or the ABAP editor in SAPGUI.

In an on-premise system, you can set the language version using the Eclipse-based ABAP editor (ADT) as shown in the following figure:

In Cloud systems, the ABAP language version is automatically set and cannot be changed. For example:

Let us now shortly discuss the common parts and the differences between the ABAP language version ABAP for key users and ABAP for SAP BTP.

1) Both language versions are designed for use in Cloud. Therefore, they must not support all kind of statements that would endanger the operations in the Cloud: Examples are:

2) Some frameworks and technologies are no longer supported in Cloud development. This includes reports, list processing, dynpros. Thus, the related ABAP statement are forbidden.

3) Both language versions are designed to support “modern” ABAP, Therefore, obsolete statements are not supported. Here, ABAP for key users is stricter than ABAP for SAP BTP, because in the second, we want to support the migration of coding from on-premise to the Cloud ( How to bring your ABAP custom code to SAP Cloud Platform ABAP Environment ). For ABAP for key user use cases, we assume that coding starts on a green field and can be modernized to a larger extend.

Here are some examples for obsolete statements, which are forbidden in both language versions:

For these statements, “modern” alternatives are available.

In ABAP for SAP BTP, some statements are available, but a warning is issued that they should be replaced by a newer syntax.

4) Working (creating and calling) with classes is supported for ABAP for Key Users and for ABAP for SAP BTP. In the Key user tools, you can create custom libraries (ABAP classes) only using the Fiori app Custom Reusable Elements.

Function modules (creating and calling) are supported in ABAP for SAP BTP only.

7) Asynchronous programming is supported in ABAP for SAP BTP, but not in ABAP for Key Users. But statement like CALL FUNCTION … STARTING NEW TASK, RECEIVE, WAIT are no longer supported. They are replaced by an API (CL_ABAP_PARALLEL).

9) For ABAP for Key Users is design for implementation of “code snippets” in exits, for example BAdI implementations and determinations, validations, actions in business objects. Therefore, direct manipulation (insert, update, delete) of tables (even for custom tables) is not supported here.

10) System variables (SY-) are also subject to allowlisting. Some of them are no longer available due to the Cloud environment or non-supported frameworks (e.g. dynpro). All others are only available for read-only access and a warning is raised. For use cases like language, time, etc. APIs are provided that must be used, e.g. class CL_ABAP_CONTEXT_INFO.

11) Finally, what is “in” for both language versions?

Let me conclude with a list of useful documentation:

Is CONCATENATE an obsolete statement or not?

It's inclusion in ABAP in the Cloud would tend to indicate it is not. However the ATC checks in the "Code Pal" used to saysay that CONCATENATE is obsolete.

CONCATENATE is obsolete. SAP has released it in the language version for key users and Cloud dev because it is oftern used.

> WAIT are no longer supported. They are replaced by an API.

Could you please let me know which API you ment?

The API for parallel processing is CL_ABAP_PARALLEL.

here you mean system calls, but what about usual FM calls? I haven't found them mentioned in text, except parallel ones. Do we allow to call functions in ABAP SCP version?

Is there a list of objects supported for ABAP on SCP(Version 5) has also been published somewhere like SAP did for List of statements for ABAP for key users?

This is basically the index of the ABAP documentation (see link in my blog, then go to index).

Thanks for sharing this Thomas. This is really helpful.

I have several questions regarding the restricted ABAP settings:

very good questions. Just to make sure that I understand the context of the questions correctly. They are related to on-premise. Because:

As your questions call for a detailed answer, I will create a new blog post with focus on on-premise.

my questions are related to an on-premise S/4HANA installation. But we would like to enforce to use only released APIs (CDS views).

see my new blog post Restricted ABAP and SAP S/4HANA On-Premise. It provides the information on what is possible on premise. It particularly answers the question 1 & 3.

Question 2: there is no reporting on the "lines of code". What I would recommend: run the "Cloud readiness" ATC check and count the number of violations in your code. This would be a good KPI from my point of view.

In the S4/HANA cloud world - extended edition, is setting defaulted to "ABAP for Key Users"  in ADT? Documents state that development can be performed via SAP GUI as well but not sure how the restrictions play in.

The language version in ADT and in SE80 is not defaulted. It can be optionally set.

Thanks for the answer. Another question:

We are considering EX, but have a lot of questions regarding the custom code which we have been writing on our onPrem system. What’s the best way to find if can move custom code to EX which we wrote for ages? Is ATC the only way to check compatibility?

If yes, do we use ABAPGit or Transport system ?

On S4HANA cloud, which ABAP language is enforced at SE80 level ?

Please refer to the blog post How to bring your ABAP custom code to SAP Cloud Platform ABAP Environment as a starting point for your code migration. It describes e.g. how to use abapGit and the checks that you can perform.

On S/4HANA Cloud, SE80 is not available.

I have a question with regards to this point:

White-listing check: only whitelisted SAP APIs (for example white-listed classes and CDS views) can be used. The syntax check analyses the used SAP objects and checks if they are whitelisted.

Where can we find a list of all the whitelisted SAP APIs? I think providing something like this is a must. According to my Google search, there is an app called "Released ABAP Artifacts" that should provide this. But it is only a desktop application, and requires some special rights to access. Would it be possible to provide a web, free-to-access app of whitelisted APIs? Otherwise, if we get a Cloud Trial account to experiment with some features, we are just shooting in the dark with regards to what we can do. For example, the use of "if_http_client" interface is not permitted. So how am I supposed to know which API is whitelisted for sending HTTP requests?

The list of whitelisted APIs depends on the product you are using, and therefore the tool is different and embedded in the product.

This tool is of course also available in the free SAP Cloud Platform ABAP Environment trial account (but unfortunately not in a free web tool).

Your concrete question: the cloud-ready replacement for “if_http_client” is "IF_WEB_HTTP_CLIENT". 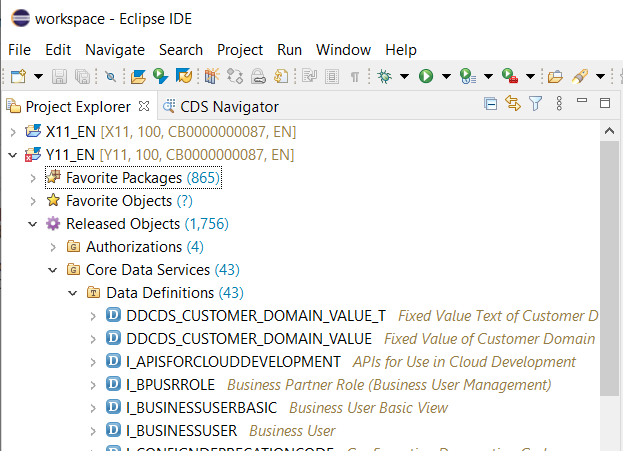 This is of course a perfectly valid solution too! I was not aware that we could also find the Released objects within Eclipse itself. (In fact, I think that's a problem that's all too common in ABAP - it's not that you can't do stuff with it, it's just that information about how to achieve it is lacking... but that's off topic!)

Thank you for the very fast and concise reply!

in this course many classes are no longer supported I guess, e.g. the class cl_rsda_csv_converter. Are there alternative possibilities or is there a list of obsolete classes with alternatives?

There is unfortunately no comprehensive list of obsolete classed and function module with their successor. However, for important functions, SAP provides a successor information. You can see this for example for the function module SI_UNIT_GET. When you open the API state window in ADT, you can see that the status is "Not to be released" and a successor CL_UOM_CONVERSION is maintained.

But, as mentioned, you cannot expect this for all thousands of classed and function module, data types, etc. in the ABAP platform. 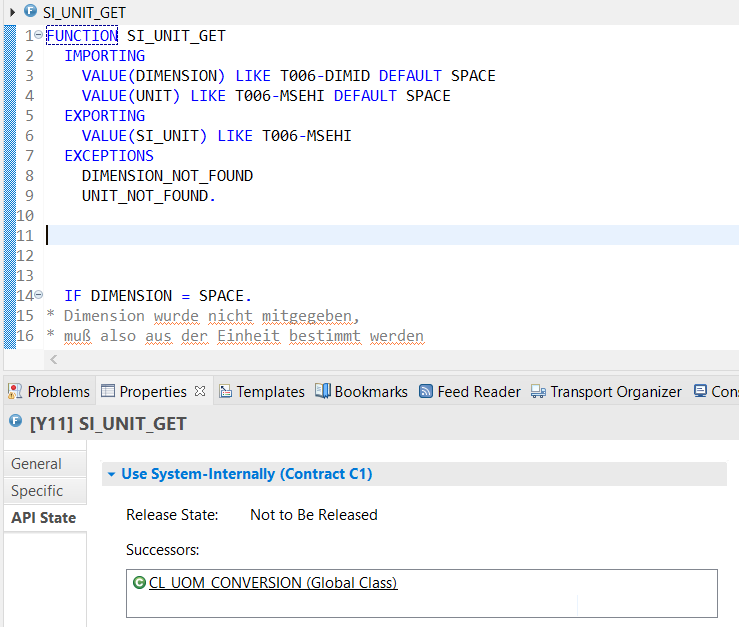 Thank you for your quick answer Thomas!

thanks for sharing this article.

Am I right that point 8) is outdated? Im also confused that it says "Providing and implementing extensions are not supported for ABAP for Key Users", because this article 2019 is about exactly that - no?

Thanks for making things clear for me!

Thank you for summarizing. Few Questions.

For parallel processing, IF_ABAP_PARALLEL / CL_ABAP_PARALLEL is released
For streaming, classed such as CL_ABAP_*_READER are available. Please check if they support your needs.

Is there a way to prompt for values when executing an ABAP class inside ADT? In the old days we’d use PARAMETERS. Thanks