In a normal year I would go to several SAP Inside Tracks and occasionally also get the opportunity to present my topic for that year. In the past years I have been speaking about Legacy Coding, Standards and Guidelines and what you should (not) do with comments. Given that in 2020 opportunities will be rather limited I thought that I might as well volunteer for the SAP Online Track that was announced a few months ago. This years’ topic is “Refactoring for Dummies”, my proposal was accepted and made its way into the schedule as SOT202 for Saturday, May 30 between 13:20 and 14:00 UTC (15:20 to 16:00 CEST). 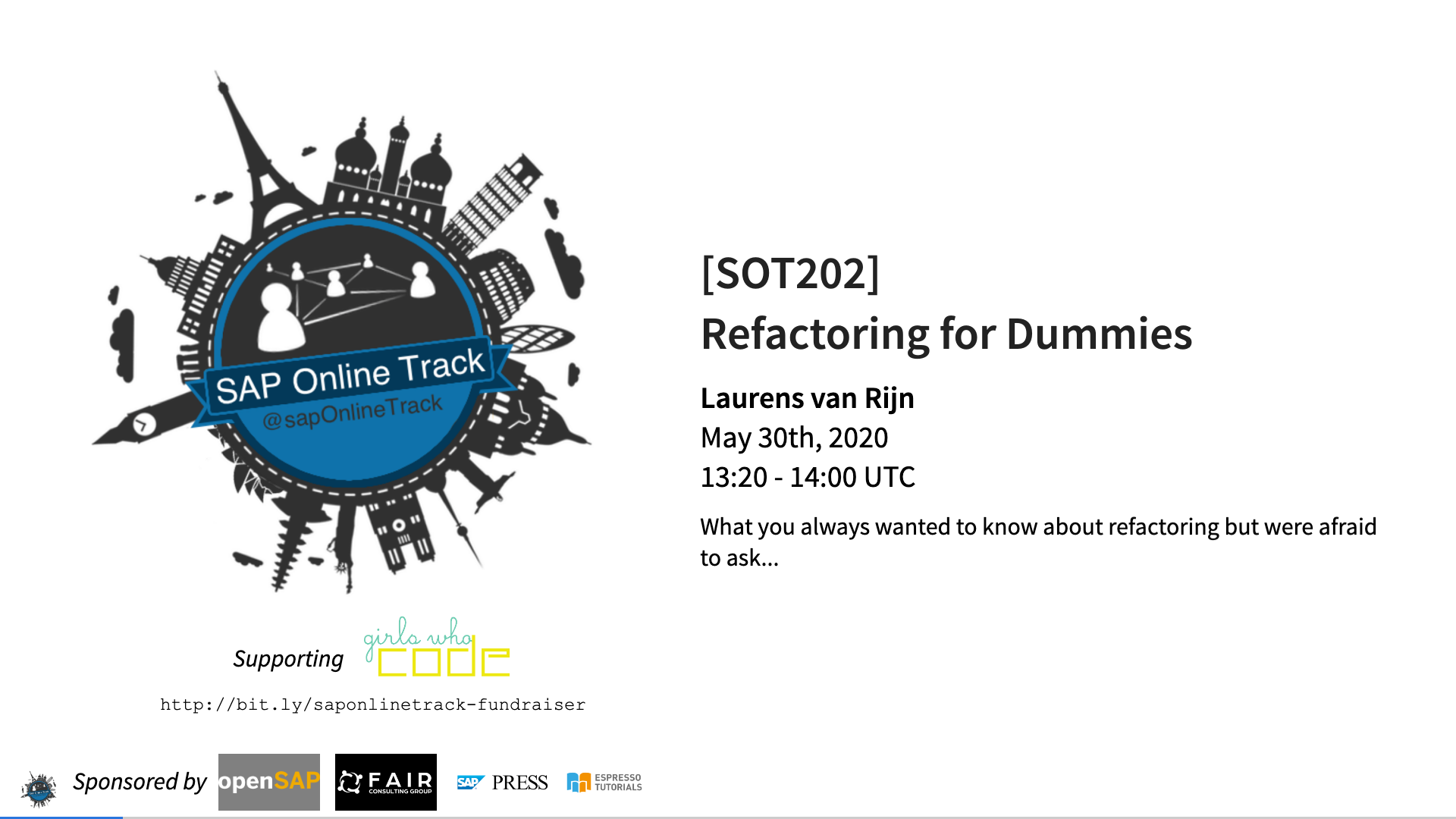 The organizers made three options available for us of how to present our talks which Ronnie André Bjørvik Sletta explained in a blog post: easy-mode (sharing the presentation via Discord), offline-mode (aka pre-recorded) or DIY-mode for those adventurous enough to do the streaming themselves. Though there’s a slight preference on the side of the organizers to go for the offline mode that would not really work for me as I would never be satisfied with the recording I’d make no matter how many times I would have tried. So, Discord to YouTube it will have to be.

In my presentation I’ll discuss the basic steps of refactoring. What it is, its advantages and disadvantages, how to spot if code is a candidate for refactoring and, last but not least, how you can actually fix your code. There’ll be enough time for your comments and questions in the live stream chat on YouTube and if you are interested in the session, you can already set a reminder for the YouTube stream.

It just so happens that there will be two other refactoring sessions this weekend I’d like to recommend them both to you as they’re complimentary to my session. First, a few hours after my session, Johann Fößleitner will be providing a demonstration how you can refactor using the ABAP Development tools in Eclipse. You can find more about his session here: [SOT307] Refactoring in ADT. Second, Paul Hardy‘s session will show what kind of problems you encounter when you attempt to refactor a huge dynpro into an OO masterpiece. Use the preceding link to set a reminder for his late night (CEST) session.

I’m also looking forward to participating in several of the ~ 50 scheduled sessions next weekend and watching the recordings of many I’ll not be able to catch live because they’ll be streamed during my night or happen concurrently with others I’m interested in. As others, I’ll most likely focus on ABAP and SAP Community related sessions but who knows what I’ll actually end up “sampling” during this weekend and afterwards?

How about you? Have you already picked and chosen the sessions you’d like to join? Over the course of this week, more blog posts about SAP Online Track should show up here to whet your appetite and help you to select your favourites.  You can also head over to the SAP Online Track YouTube channel to setup reminders for sessions to then get notified when they are about to be launched. Following SAP Online Track on Twitter is also an option to keep up with things. Hope to see many of you joining the fun!

And last but certainly not least, a big thanks to the team coming up with this great idea even before the Corona pandemic put a general stop to in-person events and for organizing what is bound to be a very memorable and timely event: Jakob Marius Kjær,  Ronnie André Bjørvik Sletta, Anne Johnson, Katan Patel, Nabheet Madan, and Srikanth Peri!