‘Order to cash’ process is the backbone for most of the industries. Many a time, we face the questions from the existing SAP ECC customers ‘Why to migrate to S/4HANA’ when there is no change in Sales order type or item category or Fiori app for creation of sales order etc in S/4HANA. We, as a consultant should be aware of the changes in Sales & distribution (SD) in S/4HANA w.r.t SAP ECC and the corresponding business benefits to the customers for migration to S/4HANA. My present blog is to capture the ‘Changes in SD in S/4HANA w.r.t SAP ECC’ as described below. You may also refer my four  year old blogpost in link https://blogs.sap.com/2016/05/16/s4-hana-and-its-differences-with-ecc/ for ‘Differences in S/4HANA w.r.t ECC’.

SAP introduced new data model in S/4HANA as depicted in below image (Copied from SAP document as of 1610 release). 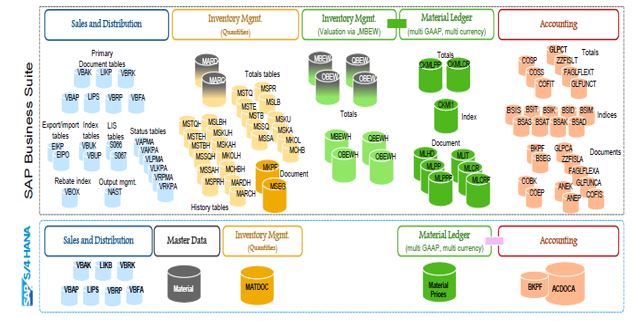 Following are the major changes for Sales & distribution (SD) with benefits like,

There is a new database table PRCD_ELEMENTS for pricing conditions to replace earlier cluster table KONV of SAP ECC. New table is a transparent table, hence can be accessed directly and has several extensions in its data elements and fields as shown in below image (copied from SAP note 2220005).

Business partner (BP) is the single point of entry for creation, change and display of customer (as well as vendor) in S/4HANA. BP is a strategic object model in S/4HANA as shown in below image.  Conversion of customer (and vendor) to BP is mandatory for conversion from ECC to S/4HANA. Refer SAP note 2265093 for more details on BP, its benefits and the recommended approach for conversion through Customer vendor integration (CVI). Below image shows the data model for BP in S/4HANA. When a BP is created for a customer (or vendor) for General data, Sales organization and company code in S/4HANA , then those data also get stored in those old tables like KNA1 , KNVV and KNB1 respectively along with BP tables like BUT000 etc. 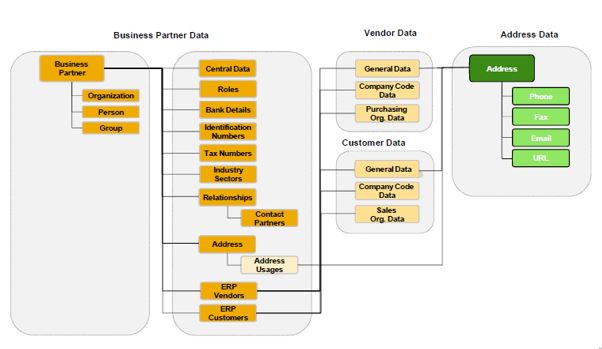 This Advanced ATP provides very simple set up with fiori apps for advanced functionalities for Product allocation (PAL), Alternative based confirmation (ABC), Backorder processing (BOP) and Release for Delivery (RFD) as in below image. 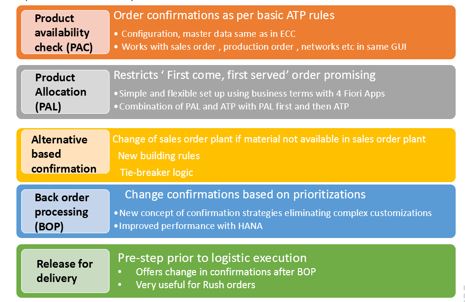 Refer my blow blogs for some of the great features of Advanced ATP in S/4HANA.

As Advanced ATP is being built from scratch in S/4HANA, it is evolving in every release of S/4HANA.

Sales order blocked for credit can not be approved with ECC transaction code like VKM3. A case with ‘Documented credit decision’ DCD is created in S/4HANA which needs to be reviewed and approved by a Credit analyst. Refer my below blog for more details on DCD in S/4HANA 1909 release.

Solution for Sales rebate has been simplified in S/4HANA with Condition contract & settlement. Refer my below blog for more details.

SAP introduced new Output management (OM) in S/4HANA. Pros & cons of ne OM has been depicted in below image. 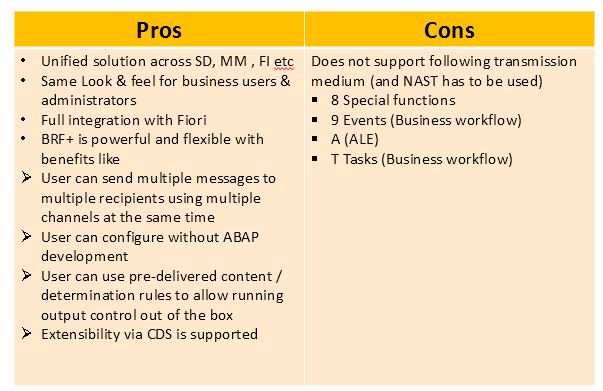 As of S/4HANA 1909 release, both (new output management and traditional NAST output of ECC) are available i.e New Output management is optional, not mandatory to be used in S/4HANA. Refer SAP notes 2228611, 2470711 for more details.

Discussion on S/4HANA is never complete without Fiori apps. SAP has provided fiori  apps like ‘Sales order fullfilment‘ which will help the ‘Order management’ persons to analyse the issues with sales orders with easier navigation to process flows with issues in a sales order as in below image. 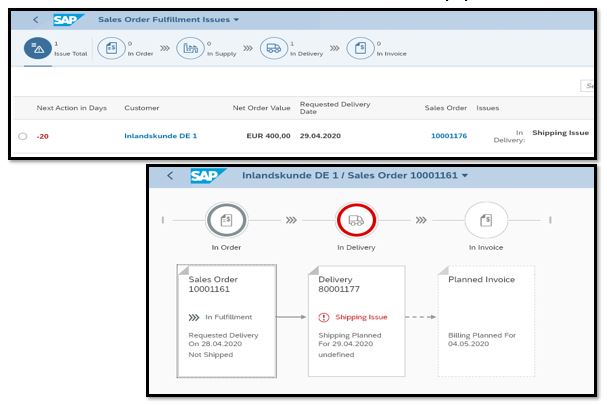 Many customers complain that there is no native fiori app for ‘Creation of sales order’ as of 1909 release of S/4HANA. It is in SAP’s roadmap , hope to get that app in upcoming release. Understand from SAP that it is quite complex to combine various SAP standard Sales order types in a single fiori app and that is the reason for the delay.

SAP has deprecated ECC’s Foreign trade (SD-FT) functionality. Hence, the Tables like EIKP and EIPO are redundant in S/4HANA as shown in first image of this blog. SAP recommended to use SAP’s application Global trade services (GTS) to be used for foreign trade functionalities. However, SAP later introduced ‘International trade’ which can be used for Intra-stat and most of the export –import functionalities. Refer SAP notes 2223144, 2267310, 2839197 for more details.

SAP’s GTS can also be interfaced for advanced functionalities like Preferential  management, Free trade agreement etc with S/4HANA as in below image. As of 1909 release, SAP does not have any plan to embed GTS within S/4HANA.

SAP has introduced ‘Advanced variant configuration’ in S/4HANA. Refer SAP note 2876227 for more details (Sorry, I did not have the opportunity to explore on AVC in S/4HANA and hence can not provide more details).

This blog is based on my understanding as of S/4HANA 1909 release. Please refer latest / updated SAP notes or contact SAP if certain things are not very clear or conflicting. Will appreciate your feedback , comments on this blog.

Thanks a ton Mrinal for the valuable information.

Nice summary, thanks for sharing!

Superb informative. Thanks for Sharing.

Good one. Thanks for sharing!

Thanks Mrinal. Can you suggest any E-book which can help in learning HANA-SD-MM modules.

In my view , SAP Learning hub , Open SAP and SAP notes are good sources for learning.

Thanks a lot for such document, pal. Best Regards.

Thanks Mrinal, nicely captured. I think from 1909, workflow for quotation has been provided. Correct me if I am wrong.

Thanks . Yes, SAP is releasing more and more workflows in most of the process areas in every release and there are new workflows also on Sales for approval of sales quotations & documents.

Some items are missing, for example

Also, there is a lot of details regarding FT  and embedded GTS.

For order creation app, it is already released in cloud version. Hopefully it get ported to OP 2009.

Could you please upload what are the changes has been done

Excellent Blog. Very detailed & easy to understand. Thanks for sharing.

Thank you so much, really sums it all.

Super Informative, Can't find a better summarization than this one.

Really well written and to the point.