Have you ever feel the need of session which has unlimited lifespan for event handling?

Recently I came across new features available in SAP HANA called ABAP Daemon. It is available from system SAP HANA 1709(AS ABAP 7.52) . Further modification was added in 1809 i.e. Start-up configuration.

In SAP, most applications use either batch jobs or session-based polling techniques to detect an event in the system (e.g. create/update/delete), and then apply the next required steps. These techniques are not completely reliable, can sometime fails due to error/short dumps/ outage. Daemon provide much reliable way of event handling.

Lets suppose you want to perform some activities after some events or documents created in the system. In this case the next activities required to be performed, can be passed to daemon by sending message to daemon instance.

An example with business case is explained in my next blog Implement ADF: ABAP Daemon Framework

For now, lets go in details of ABAP Daemon.

What is ABAP Daemon?

SAP provide it as a ABAP Daemon framework(ADF), which contains event handler API methods described below. The class CL_ABAP_DAEMON_EXT_BASE has to be inherited in order to implement ADF.

These ADF method get invoked by the methods of Daemon Manager class CL_ABAP_DAEMON_CLIENT_MANAGER.

The details of both class are described below: 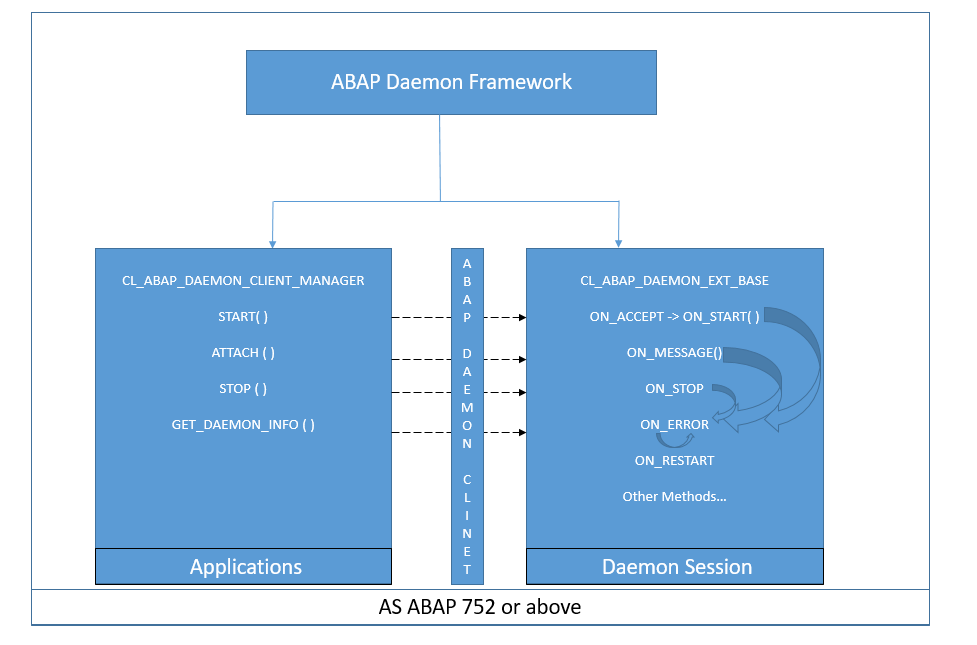 Lets see what are method available in the API:

As some ABAP statements would cause the daemon to block the execution of arrived events, ABAP Daemons use an adapted non-blocking programming mode. In this programming model, most of these blocking ABAP statements, e.g. SUBMIT, CALL TRANSACTION, WAIT, CALL SCREEN, etc. are not allowed and usage will result runtime error ABAP_DAEMON_ILLEGAL_STATEMENT. An exception is the synchronous Remote Function Call (sRFC): ABAP Daemons are permitted to use synchronous RFC (CALL FUNCTION <func> DESTINATION <dest>) and asynchronous (CALL FUNCTION <func> STARTING NEW TASK <task>).

Beside method ON_ACCEPT, all the methods contain parameter referencing interface IF_ABAP_DAEMON_CONTEXT which can be used to get the context information & also save/restoring context data into ABAP Daemon memory area up to 1 MB.

Note: The ABAP Daemon memory is a subarea of the user memory in which ABAP Daemon can save context information in PCP(Push Channel Protocol) format. 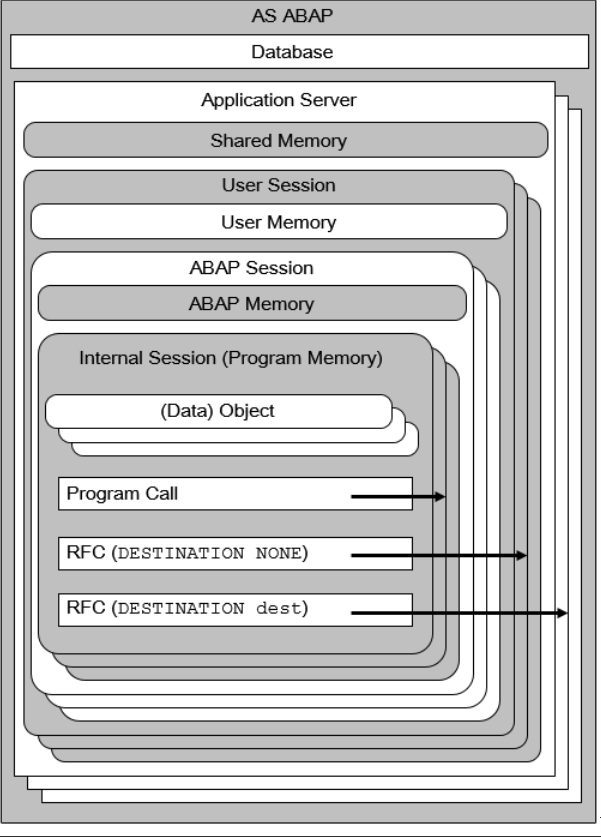 ABAP Daemon Class Name: It tells the name of implementing class (CL_ABAP_DAEMON_EXT_BASE)  of the ABAP Daemon.

ABAP Daemon Name: It has a non-unique, technical name, which is set by the application that has started the daemon. The name is used to identify the ABAP Daemon or a group of multiple ABAP Daemons.

ABAP Daemon State: State in which a running ABAP Daemon currently is.

The states can be the following:

Client: Client in which the daemons is running.

User: Name of the user who is running the ABAP Daemon session.

Creation Time: Date and time when the ABAP Daemon was created.

Autostart: Indicates whether the ABAP Daemon has been automatically started by the system or not.

Events: Number of daemon-specific events which were processed by the ABAP Daemon.

Click of ABAP Daemon session ID hyperlink, you will get further more details of each daemon instance:

To understand better, I implemented a prototype. The complete implementation is described in next blog with an example.It shows the integration with Interfacing technologies: AIF(Application Interfacing Framework ), IDOC, ABAP Daemon, email etc.

Daemon is very useful & reliable for event handling as: