Simplifications in Rebate processing with Condition contract in S/4HANA

Rebate is a kind of discount paid to a customer retroactively. Generally, this discount is based on the customer’s sales volume over a predefined time period and settled by credit notes at the end of the year. Accruals also also generally calculated at regular intervals (monthly) for the amount that needs to be paid back to the customer . Below image shows a typical rebate scenario in which the rebate discount is applicable when the cumulative value of sales is above 50000. At the end of fourth month, the rebate has been calculated @4% on 2000(52000-50000) i.e 80 and considered as an accrual for that month. Total rebate for the year has been calculated as 3040. 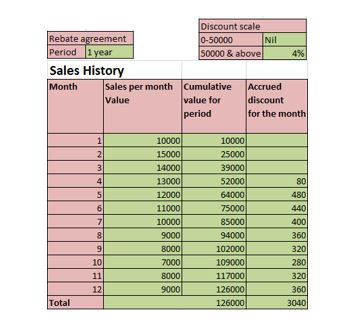 The process flow diagram for Sales rebate in SAP ECC has been depicted in below image. After the creation of rebate agreement and billing document/s, Transaction VBOF (or program SDBONT06) needs to be run to update the corresponding sales volume in rebate agreement. Rebate is generally processed at regular intervals or at the end of the year. An Index table VBOX is used to link the rebate invoices to reduce the processing time . Finally, the rebate agreement is released for settlement and subsequentl settlement creates debit memo request and debit memo to the customer. 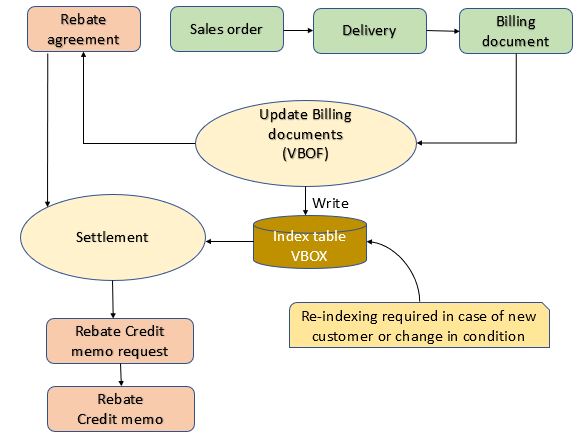 Major limitations of the above rebate process in ECC are

S/4HANA has simplified the rebate processing with the

A Condition contract is created in S/4HANA instead of a rebate agreement as shown in below image. System now neither requires to update the billing document in rebate agreement (condition contract) nor separate tables (like VBOX as in case of ECC). HANA database now directly accesses the relevant (billing) documents and calculates the accrual values based on the accrual conditions of business volume for Condition contracts. Also, note that no credit memo request is created which is a futher simplificatios. Settlement document directly creates credit memo along with corresponding financial accounting documents . 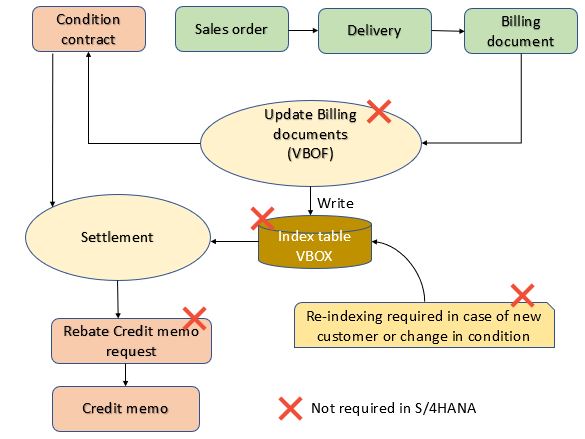 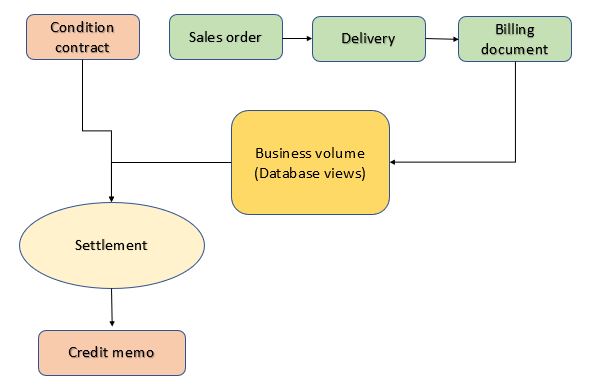 The parameters for determination of business volume is also very much configurable (i.e not fixed ) in S/4HANA . Below image shows the standard configurations for business volume determination for Sales rebate 0S01 which considers the fields BONBA (Rebate basis 1) and NETWR (Net value of billing item). If the gross value of billing item is more appropriate for a particular business scenario, then that can be achieved with standard configuration. 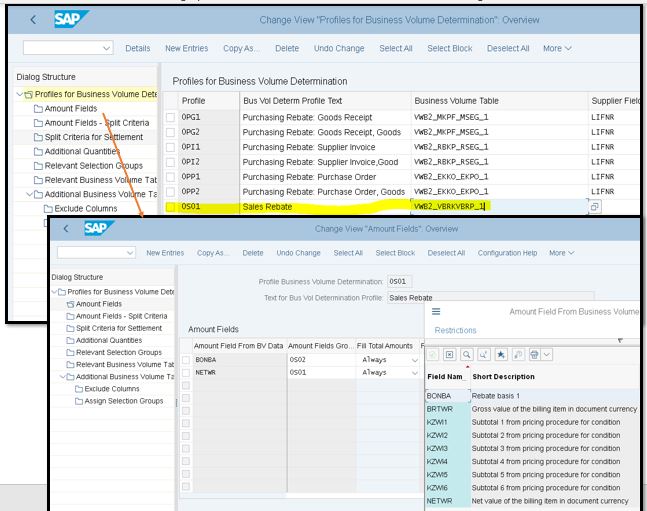 Another big advantage of rebate solution with condition contract is that it can be applied to vendor rebates as well (and many other scenarios like bonus , commissions etc). The process and system solution for rebates in Sales (Order to cash) and procurement (Procure to pay) is same as shown in below image.

Business benefits with new Rebate solution with Condition Contract have captured / summarized as below. 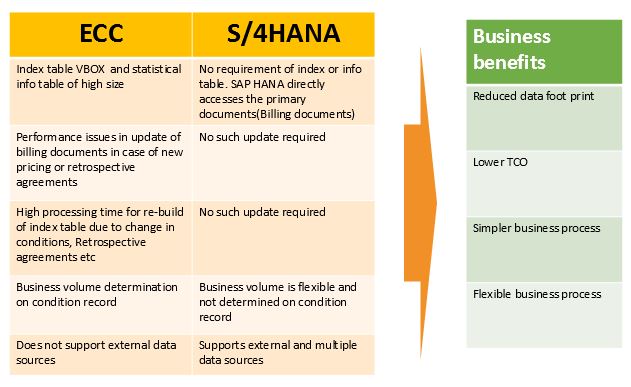 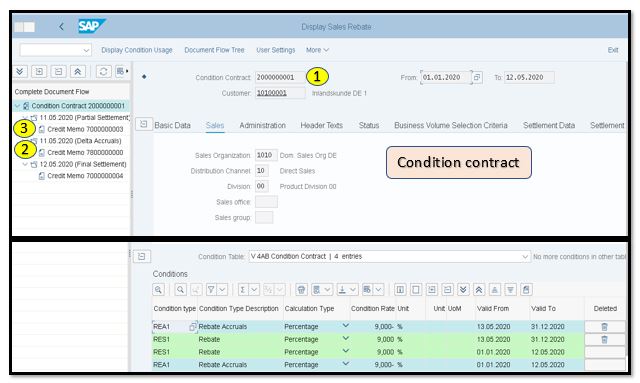 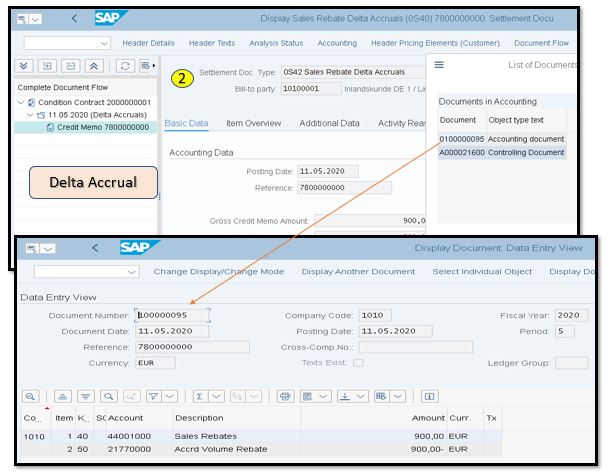 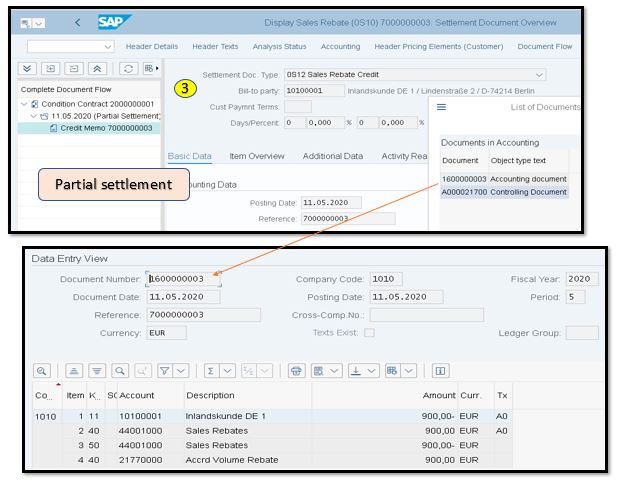 In my view, this new Rebate solution is one of the most significant simplifications in S/4HANA. This blog is based on my personal observations , tests , existing blogs and SAP documents. Will appreciate your views / comments.

I did not notice this note 2535889 earlier. Lot many details . I have now added this note to the blog. Thanks Samik.

Great explanation and thanks for detailed information.

I was looking for the functional understanding ...Thanks for detail explanation.

Could you please explore or get into more details related to Delta Accrual Settlement type ?

Not clear what is used for and if its mandatory. If you have a real example will be nice.

Delta accrual is not mandatory.

Suppose , you have an agreement with a customer for rebate for sales from Jan to Dec and rebates are settled (final) at the end of the year. But, your sales or finance dept wants to know the total accruals say from Jan to March, then delta accrual can be settled jan to march.

Hope , I am able to clarify.

Based on your shared example (condition contrat number 20000000001), I noticed you created 3 (three) credit memo documents (one for Partial, Delta and Final).

Where can you specify (from which type of settle - partial, final ou delta) the credit memo is creating for ?

Settlement type can be specified in tab 'Settlement calendar' of CC as in below screenshot.

Yes, OK, but my concerning is when you are creating a Credit Memo.....

How do we choose settlemeent type during Credit Memo document creation ?

Type of settlement cab be selected in WB2R_SC as below.

Through t-code WB2R_BUSVOL we are able to see the amount which were already paid.

However, what is the easiest way to consult the amount that must be paid to the customer ?

Now, I want to settle a partial value....so where can I display or consult the value accumulated so we can generate a credit memo for it ?

Ok, Thanks a lot for your help and tip.

Another feature based on what I see is that we can have a single contract that will perform both volume based accrual /settlement   and Fixed scenarios where you can directly settle  (like a monthly rent).

Hi, thanks very useful, want to know in the case scenario that the Condition Contract will not be applied to the customer and requires to reverse the Accruals for already created Sales Billing Documents that were considered in the Business Volume, without Cancelling those documents, what would be the procedure?

Accruals can be reversed (without cancelling billing docs) with below highlighted transaction. 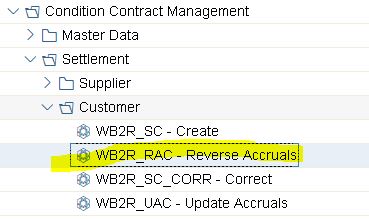 Thank you very much for this interesting blog.

Question from a non specialist : let's assume that we go green field with limited data conversion.

In this case, we would load the open orders and open invoices (open AR balances). However, the closed invoices would not be loaded.

Let's assume that we go live in the middle of a fiscal year.

How do we load the balances (what has been spent by the customer till the day of go live) so that the settlement management can take this into account ? Is the option to load the difference between what the contract states and what awas already spent by the client ? Issue there could be that if the contract states that we give a 2% for a spent between x and y and 3% if we spend before y and z....

Thanks in advance for your ideas

Yes, these are the typical challenges in migration.

In my view , best approach will be to close rebate agreements as much as possible and start new condition contract in S/4HANA.

Very useful blog, Thanks a lot for this.

One Question: Is it possible to create settlement document for fixed amount (Advance service revenue credit) without business volume is accumulated or invoice is not created for a particular customer.

I do not know the context of your requirement . But should this (advanced credit) be considered as rebate if it is not dependent on business volume or occurance of invoise.

Do you know if there is any standard solution to add (like a parameter) into the BV report according to your comment "parameters for determination of business volume is also very much configurable"? Or it should be created a new Z report to include the logic used in both t-codes mentioned above?

I have the same query.

Thanks for sharing your knowledge in this blog, rally helpful.

Thank you for sharing this document, very nice explanation on Rebates  in S/4 HANA.

If yes, how can we achieve this?

Is there a similar post on Vendor (Supplier) Rebate processing with Condition Contract in S4Hana?