This is the 2nd blog post in the series on Centralised Transport Naming Standards.

As mentioned in my previous blog post, I was interested in understanding how the solution could be ported to the SCP ABAP Environment. In theory at least, it is a logical place for it, since it wasn’t dependant on any core SAP logic such as FMs or global classes. Therefore, I thought it would be a useful exercise to perform for several reasons:

This blog is a combination of both 2 and 3 in that it is a step by step account of the migration, identifying the major issues along the way but also some benefit of hindsight in how I would approach this a second time around.

Step One – Check the code in the current environment

As per Olga Dolinskaja’s  blog on How to check your custom ABAP code for SAP Cloud Platform ABAP Environment,the first step was to run the the SAP_CP_READINESS_CHECK on the current code. I was hopeful there would be a decent number of ‘Quick Fixes’ but unfortunately only two 🙁

There were also a multitude of other errors and warnings that primarily fed into 2 camps:

Plus there were two other errors related to table maintenance dialogs that appeared under the heading ‘Check for allowed object types in SAP Cloud Platform ABAP Environment’. These are obviously due to dynpro’s not being allowed in the target environment, which was fair enough.

Now was the task to enact another blog by Olga Dolinskaja’s . The ‘How to bring your ABAP custom code to SAP Cloud Platform ABAP Environment‘ one in this case, as well as studying the tutorial Use abapGit to Transform ABAP Source Code to the Cloud that she also references at the bottom of the blog. In our case, rather than GitHub, I used Azure DevOps but the procedure is pretty much the same.

Here is the import log where you can see the table maintenance dialogs I mentioned before. 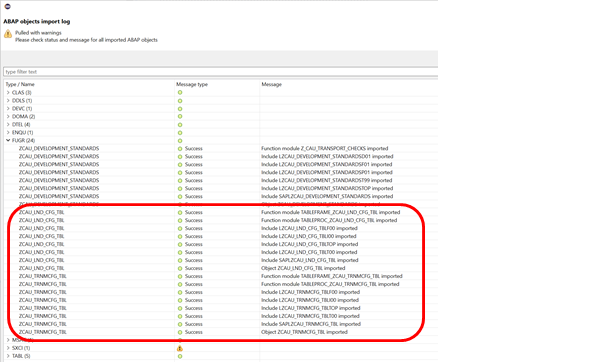 Here they are listed as successful, but clearly they cannot be used in the new environment and unfortunately I cannot delete them there either!

Hindsight Tip #2 – I should have paid more attention at this point, specifically around the objects that were supported in Steampunk. Coupled withe Hindsight Tip #1, the package ready for upload to Steampunk should only contain the objects supported.

After import there were a lot of errors. I decided to work from the bottom up – especially since the top was completey broken anyway (dynpro) and had to be deleted (somehow).

The main areas for remediation were:

Very few domains and data elements exist within the Steampunk (93 data elements, 22 domains at the time of writng this) and the advice from SAP is to create your own anyway.  For even this small piece of development, I had to create 17 data elements and 17 domains. Not difficult of course, just time consuming. Naturally, as you build up your own environment, it would be wise to have a strategy as to how/when you create DDIC objects vs use your existing namespace ones.

Of course now the required data elements and domains are in place, the table definitions now needed to be adjusted accordingly, reflactoring the typing of fields to the newly created data elements. Also, system fields that we would orinarily take as granted are not in the standard guise, sy-mandt for example is not available – use abap.clnt instead. However, sy-subrc is thankfully there though!

An example of 1 table is below:

No ABAP generator as per on premise, so this involves a CDS views (should be two I believe now – interface and consumption?), plus the Business Definition and Implementation, then the Service Definition and Binding. The Fiori Elements UI is then accessed from the Service Binding. (No FLP currently I understand although on the roadmap).

I’ve aligned the objects alongside the RAP model in the diagram below as best as I understand them.

I don’t pretend to think that this is the best practice way to implement this, so if anyone can steer me to the correct way, feel free 🙂

I’m also assuming that I have created an unmanaged business object as I have created the CRUD operations myself. The outine structure can be seen expanded out below:

and then in greater detail showing the Behaviour Implementation structure: and a snippet of the coding within is below.  For knowledge on this, I referenced the code from the Flight Model – package /DMO/FLIGHT/ – that I had previously imported via the Downloading the ABAP Flight Reference Scenario page on the ABAP RESTful Application Programming Model standard SAP help page or also available via the .pdf

Naturally, this is quite an onerous task to just maintain a table, especially when we are used to creating this facility in a few clicks. Glad to hear that SAP have it on the roadmap to address.

The last item that I wish to highlight is:

However, when I tried to use it, I encountered issues. Although the object was there, my code couldn’t ‘see’ it. I couldn’t create it using the same name either, so a bit of a stalemate. Therefore, eventually I created a new object and deleted the old one.

As I had only copied the unit tests from the previous on-premise code, this did not involve too much apart from type changes to reflect those already made in the main class. Later on I had to refactor them again but this was a result of the complete restructuring exercise (more details to come in the next blog).

What I would like to say though is that I was glad I had the tests there as they had a fundamental role in me knowing whether my code was sufficiently working before attempting to test via the remote system.

As Inbound RFCs are currently not available in Steampunk (this is promised for Q3) I had to completely change the structure of the inbound access in favour of an HTTP Service.  The creation of the service was easy enough but the surrounding creations of Communication Scenario, Communication Arrangement, Inbound Service, Communcation User and Communication System seemed quite complex. I followed the tutorial and also had a lot of help from SAP Expert Andreas Zimmermann but still this took a while to come together. I am led to believe this will be simplified in later versions. I certainly hope so!

Also as a consequence of no Inbound RFC, I had to remove the local class (and local test class) implementations away from the original function module/group and locate them in a global class.  This was actually a good thing and something I wanted to do in the original on-premise version anyway. It certainly showed me the limitations of having the local class and something to take on board in the future.

As a reminder, this was the original setup from part one (with the RFC mentioned this time)

Now on Steampunk, the complexity rises somewhat as shown by the diagram below.

Firstly this was tested out just using the console logging functionality that was featured in the Create Your First ABAP Console Application which basically boils down to implementing the IF_OO_ADT_CLASSRUN interface, the method IF_OO_ADT_CLASSRUN~MAIN and the out->write() statement.

Then I tested via a program provided by Andreas Zimmermann

This then enabled me to at least test the connection between the two systems before then slotting the code into the BAdI to trigger on transport creation/release. This is only in a sandbox environment of course.

As well as extracting the local class out of the FM and creating the global class, I also took the opportunity to further enhance the solution to enable easier changes to the code down the line by introducing a concept known as Branch By Abstraction (covered in detail by the legendary Martin Fowler) I’ll cover this in detail in Part Three.

Overall this was a great experiment in how to migrate a fairly simple solution to Steampunk, that can now pave the way for another couple of use cases that are more substantial. These are being considered as they don’t logically belong on the system they reside on, and are also quite memory intensive. However, before venturing too far down the Steampunk track, we’ll also need to understand the consumption model i.e. what drives cost within the new environment? Perhaps this will drive efficiency in terms of coding but also will it stop us migrating code that is either memory intensive or CPU intensive in the first place?  We’ll have to see.

So for now, I will continue to invest some time in Steampunk as currently I personally see an immediate future where we will certainly migrate code but also prioritise developing solutions natively. This could be the perfect bridge to enable us to take on new functionality available in an evergreen environment, coupled to the older ‘backends’ of perhaps a NW 7.31/7.02 system used as a system of record. Features are being added all the while so there will be refactoring along the way but that’s just the flipside of being an early adopter and taking on new functionality.

I’m also pleased to see that there are new tutorials being created all the time that will help to hone my knowledge in this environment. Keep them coming!

Any thought about keeping the cloud and on premise versions in sync?

I mean, in theory the core logic could live in its own git versioned package, also transported on the other side. Would force unnatural package structure, but maintaining the same code twice isn't great either

Thanks for the thought provoking question.

Currently, I have no intention to use the code in Steampunk beyond the PoC so have not considered syncing the 2 systems.  I've also refactored the original code a lot since the move to Steampunk (after lessons on structure learned there) so in reality I'd have to move it and remediate everything all over again.

However, now the RAP Generator is here and enabled in our system, I will be investigating that in the near future.

Is it really a good idea that RAP use CDS view for business modeling?

Before, we use DDIC structure as an interface layer between ABAP Dynpro and DB table. The benefit is that we don't need to mind the Object-2-Relation mapping, we only think about how the information will be displayed in UI when defining the structure. Later, we can use ABAP to do the mapping.

I'm not sure I am best to comment on whether RAP should use CDS view for business modeling. Currently, since I am new to RAP, I find elements of it over complicated and confusing but I am sure that will pass with greater knowledge.  I am hoping the RAP Generator will at least automate some of the mundane tasks involved in table maintenance.

So we are trying to put a validation when users create a TR in SAP BTP cloud environment  ,

Can we use your reasearch .

I mean the thing that you have done is pretty high level stuff .

So just wanted to confirm before going ahead

As it happens I am also starting to look at TR validation in BTP ABAP. As you know there is no BAdI like there is in an on premise system.  Without the 'hook' I'm not sure how this will work currently. I have intended to ask SAP about this. Perhaps Florian Wahl is able to comment?

You are welcome to use the rest of the code, I intended to put it on Github but never got round to it.