If you are planning a system conversion for your SAP ERP 6.0 system to SAP S/4HANA 1809 or higher, either on-premise or move to a hyperscaler, there are several options available regarding downtime optimization. The demand for business continuity in today’s business has challenge IT professionals to perform system upgrades with the least amount of downtime as possible. SAP NZDT (Near Zero Downtime Technology) is a service in which can help you achieve your next conversion downtime requirements.

I was fortunate to work with the NZDT team on a project recently of which a global customer went live using SAP NZDT service for a conversion of SAP S/4HANA 1809 to AWS. Due to the size of their database (~25 TB) and strict requirements for downtime, the standard SUM approach was not possible. SAP NZDT service team provided expertise with the setup of infrastructure and delta replay technology and each cycle conversion while the customer and SAP partner completed the SUM and Finance conversion. The project went live successfully, and I want to share with you the final results.

Please note, at the time of the Blog Post, there are three possible downtime approaches for a conversion to SAP S/4HANA using SUM. Currently, only SUM Standard approach and NZDT are available while Downtime-Optimized Conversion is in the Pilot phase. Please see the following Notes which are available for each methodology and further requirements. 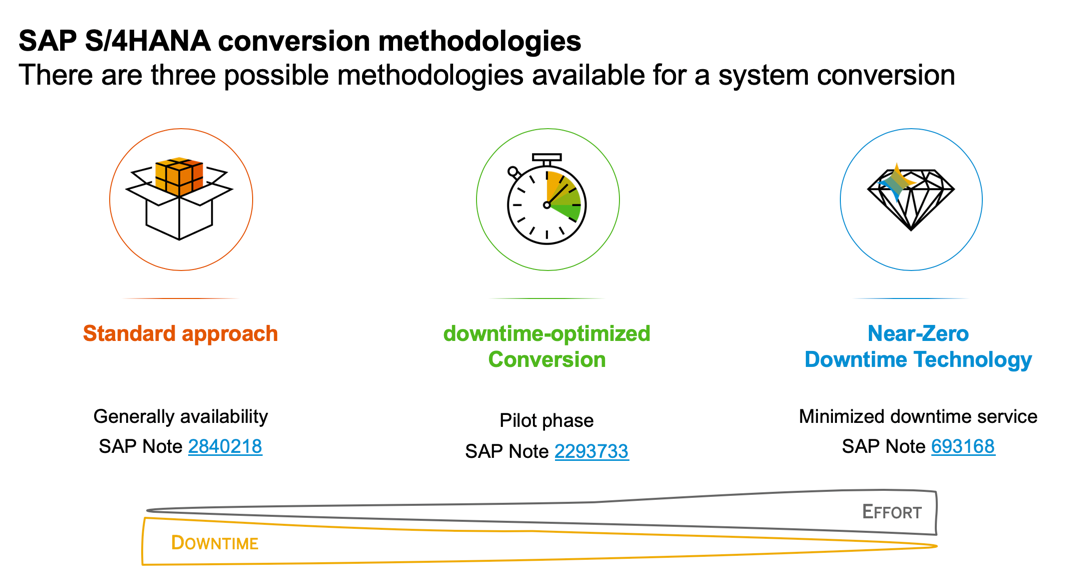 From the slide, the downtime duration decreases as you move to the right however, there will be more complexities.

How does SAP NZDT work?

Here are some key high-level steps from the diagram below: After the prep and data recording started, a system clone is created in step (3). SUM/DMO is executed on the clone system (5) while data is recorded continuously on the on the original system.  Business is a usual for the end users. As we get closer to business downtime, the target system is already on S/4HANA. Delta Replay (10,11,12) are required on the target S/4HANA system (converted system) in order to catch up on all of the changes as the clone copy of the database was created at an earlier date and time. During downtime, (14) the final Delta Migration occurs, which is significantly less time compared to step (7).  During steps (17 and 18) any post work that needs to be done are now independent of NZDT. 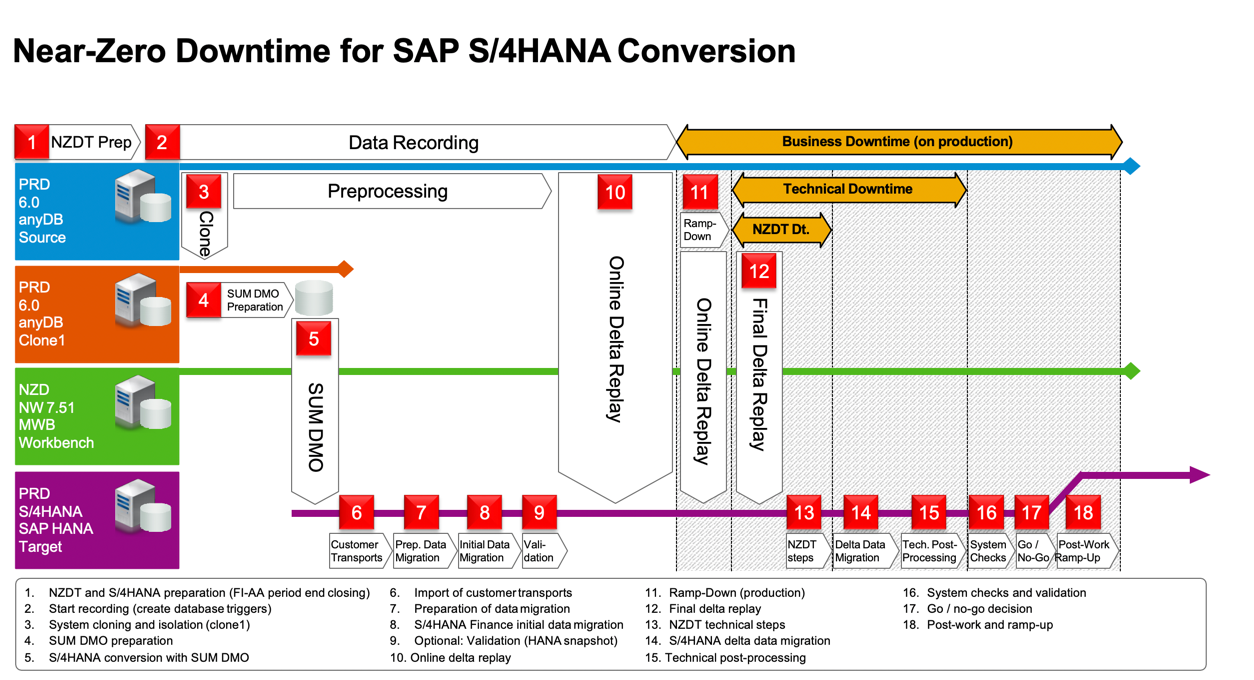 How much downtime was actually achieved by using NZDT for a conversion?

A word of caution, these results will vary between each customer environment due to the size of the database, complexity of their environment and network bandwidth between data centers. This is only for the purpose of reference.

Key Uptime Activities on Clone ~ 23 Days prior to cutover

The technical downtime using NZDT was about 8.5 hours while the Business Downtime was roughly 39 hours. As mentioned earlier, NZDT will help lower the Business downtime by reducing the technical timing. Post activities which also influence Business Downtime are based on system validation, testing and Basis related technical work. It should be noted that the involvement of both the technical and functional team are critical as you perform multiple cycles leading up to cutover weekend. Since the clone did most of the heavy lifting during uptime, only the delta processing occurred during the cutover weekend. This cutover was completed over the weekend with the business online on Monday morning.

This blog post describes the high-level overview and results of a conversion project using SAP NZDT as a methodology to reduce downtime of an SAP S/4HANA 1809 conversion.  The challenges of performing such a huge upgrade/conversion along with a data center move to AWS requires both SAP expertise and strong project planning leadership on the customer and everyone involved.  The go live was a success based on everyone’s hard work and dedication to achieve downtime.

I would like to thank Rajendran (Raj) Srinivasan for sharing the NZDT results. Raj and the NZDT team did an awesome job in this conversion project. They are rockstars!

DISCLAIMER: This blog post reflects the current state of planning which may be changed by SAP at any time.