In this blog post I want to share some ideas and experiences with implementing a component using SAP Java Connector to easily access data and integrate non-SAP processes like data pipelines in big data clusters with the SAP Netweaver Application Server. This finally led to our solution called i-OhJa.

About two years ago we started working on a project for some customer in the financial sector. The main task was to set up a Hadoop stack as the new company wide BI platform for big data and streaming. One requirement in the migration phase was to stage load data from SAP BW (on Oracle) to Kafka, another one to load data from Kafka to BW in streaming mode. During this time Kafka streams was out of scope, so we decided to implement our dataflows in Spark streaming. This was the first project to run i-OhJa on customer side in a Spark cluster.

Prior to the project we already started evaluating SAP JCo as a library not only providing a JDBC driver for databases in a SAP Netweaver system, but being able to tightly integrate SAP and non-SAP applications in a flexible way. Our goal for i-OhJa was to implement a thin library that meets the requirements mentioned above in a highly regulated sector of financial institutions, without the need to introduce new complex infrastructures or clusters. JCo being a mighty but also basic Java library with the ability to establish a trusted and encrypted connection to SAP Netweaver systems using SNC and SSO provided by the SAP Cryptolib was the best fit for this scenario.

To be honest, the last time I implemented software in Java and J2EE using Eclipse IDE was back in 2008. After a long period mostly utilizing ABAP in SAP Netweaver based systems, I was pleased to use a more modern IDE and a functional and type safe language like Scala as our choice for developing i-OhJa. In the above-mentioned scenario, we chose to use SAP BW Open Hubs and SAP Netweaver events to get data out of BW. For the opposite direction we used Webservice DataSources to load data into BW in a streaming and real-time manner. All these interfaces are based on RFC enabled function modules and have a tight integration into the monitoring and scheduling environment of SAP BW.

Since there are already a bunch of ETL tools out there and as we wanted to keep i-OhJa as thin as possible, we decided to cover only the Extraction and Load of ELT. This also follows some basic ideas of modern microservice architectures. In the scenarios mentioned above this means that the data held in Kafka is a close replication of the data being transferred via OpenHub or Webservice DataSource.

A thing we like most about Scala besides its functional style is keeping our code type safe. A short time after starting to implement i-OhJa we decided to wrap all necessary JCo classes in Scala classes for being able to use them natively in e.g. pattern matching and collection functions and providing type safety and immutability. We provide class wrappers for function templates, function requests, function responses, tables, records/structures, record fields, all elementary types available in JCo 3.1, parameter lists, corresponding meta data classes of JCo, DDIC types, message types, selection ranges, aggregation functions, ABAP exceptions, JCo destinations, BAPI return messages, BAPI transaction commit and rollback in JCo context and more.

With one of our customers we saw customer specific ELT frameworks written in Scala using JSON-like configuration files to define individual data pipelines. Concepts following this dynamic principle have some drawbacks:

Us being supporters of static type safety, we decided to take a different approach to handle the challenge of diverse data structures. We implemented Scala code generators producing case classes representing the structure of individual RFC function modules.
An example of the generated classes for a simple BAPI like BAPI_ODSO_GETLIST, delivering a list of available DSOs in a SAP BW system, would look like this:

JCo consists of two types of library components: JCo server and JCo client. For now, it is enough to know that JCo Server will be used in cases where SAP Netweaver ABAP initiates communication (here: OpenHub scenario). Whereas JCo client is used if non-SAP applications make calls to RFCs (here: Webservice DataSource push).

We have done so for the good old BW OpenHub connections, BW BAPIs and Operational Data Provisioning. As one might expect all these interfaces are based on plain RFC functions, even ODPs as successor of the business content DataSources, which were based on ALE/IDocs.

A challenge you will face when querying data through generic interfaces like OpenHubs, BW BAPIs or ODPs serving different kind of data structures is that data is serialized as text encoded strings with a record being a concatenation of different data types in a single string. An obvious option to reconstruct data structures would be to parse these strings directly into native Java or Scala objects. We took an alternative approach by parsing the strings into wrapped JCo structures created on the fly based on the meta information we get from the corresponding function modules. This way we use JCo to convert the strings into proper data types and we can afterwards make use of all the methods provided by i-OhJa for the respective wrapper classes.

JCo allows creating JCoStructure and JCoTable objects based on JCoRecordMetaData objects. In a normal use case one would get these meta data objects by querying the repository, but in this scenario the structures need to be built at runtime by making use of the JCo.createRecordMetaData method. A challenge we faced was providing byte lengths, offsets and alignments to the JCoRecordMetaData.add methods for all the data types a field of a structure can have. i-OhJa offers the ability to calculate the byte offsets and lengths for all JCo type wrappers. Together with conversion methods for all the different DDIC and InfoObject types it can create structures and even whole JCoFunction instances based on different kind of metadata.

For being able to listen for new incoming data and requests i-OhJa provides a server component with services wrapped around JCo server. Services have to extend a defined service trait and have to implement the logic for listening and processing incoming requests from a SAP system. They can also make use of the i-OhJa client libraries to request data from the SAP system. The services can be provided at runtime by registering to an i-OhJa server instance. Some predelivered services like the OpenHub extraction provide another interface for being able to register so called data adapters. The services will pass the processed data to the registered data adapter that contains the logic to finally pass or store the data. Predelivered data adapters for the OpenHub service can store data in a CSV file, output data in the console or publish data to a Kafka topic in a Kafka cluster. Further services or data adapters can be implemented according to customer specific requirements.

For being able to react fast on incoming requests, a dispatcher instance forwards requests instantly to the corresponding services. The OpenHub service uses Akka to process several OpenHub request-packages asynchronously and in parallel. A backpressure algorithm takes care of in-/decreasing the amount of data packages extracted and processed in parallel according to the resources being available.

A typical scenario in JCo applications is to register a destination provider before using a destination object to retrieve a function object from the repository. This mutable function object contains all meta data of the corresponding RFC function module together with the state of parameter values and exceptions before and after calling the function module. In short, this object contains all the information we send to and get back from the Netweaver system using function modules.
In several cases you will have the need to serialize this object or parts of it, e.g. when sending data to Kafka or storing RFC responses for use in unit tests. Another advantage of serializing function objects is that after storing a serialized RFC response you don’t need an active SAP connection anymore to create function objects. This is an alternative to using JCo function templates, which are supported by i-OhJa too.
You can serialize a function object easily by using native Java serialization with several drawbacks, like not being able to deserialize it when upgrading JCo versions and so on. But this was only one reason for us to implement (de-)serialization using different kind of data formats.

So far, we have implemented and used converters and SerDes for the following data formats:

We provide two types of user interfaces for interaction with i-OhJa: A Command Line Interface and a simple server and client Web UI based on Twirl and Akka HTTP. Akka HTTP is used for building a reactive HTTP server, while Twirl allows to generate HTML pages based on native Scala code. This is an easy way to provide direct access to all kind of Scala based functionality provided by i-OhJa that is wrapped around JCo.
The following screenshots show basic web pages demonstrating possibilities to monitor and access i-OhJa. 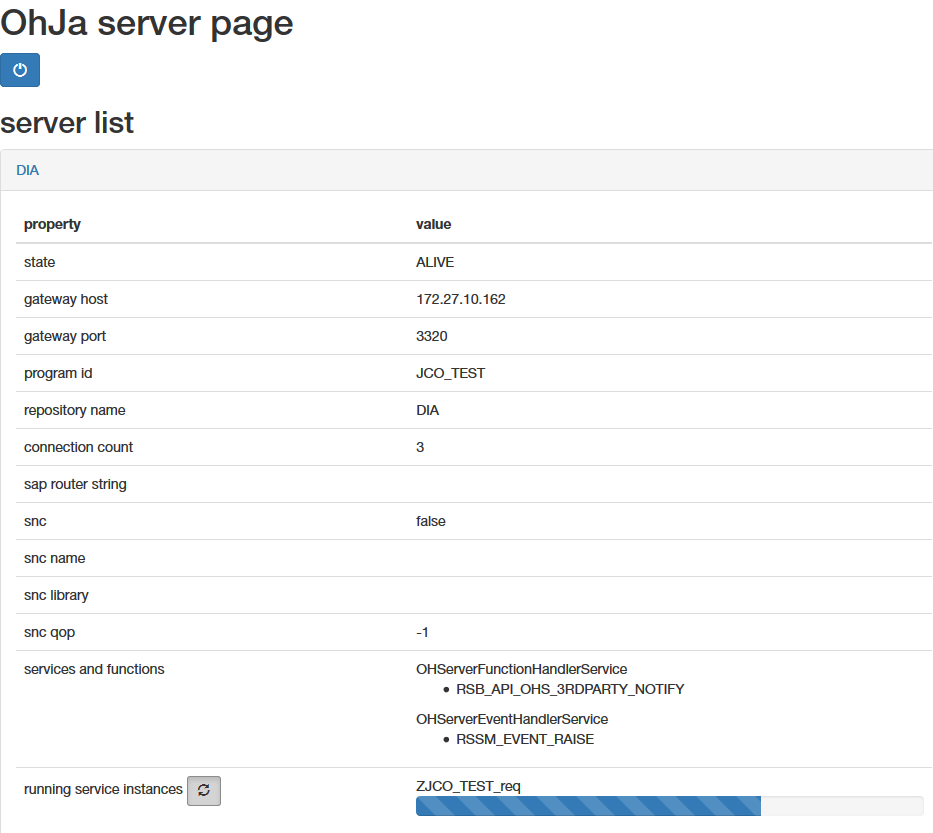 The Server page is a simple page containing information about registered services and their RFC modules as well as running instances. In the Image shown above you can see the progress of extracting an OpenHub request. The i-OhJa client page gives an overview of artifacts available in a connected SAP Netweaver system like RFCs, ODPs, OpenHubs and so on.

The page for a SAP BW DataStoreObject gives you an overview of the properties of a DSO and the available fields respectively InfoObjects. One can download the schema of the data in various formats or open a data preview for active data of the DSO for being able to see what the structure of the data being extracted will look like.

When it comes to unit testing of interface library functions like the ones contained in i-OhJa, we first must provide server and client mocks for being able to execute local tests without the need to establish a connection to a SAP Netweaver system. This was achieved by extending the wrapped JCo classes like JCoDestination, DestinationDataProvider, ServerDataProvider, JCoServerFactory etc.
With the mocks in place you just have to implement the behavior of the mocks based on RFC function calls. A simple scala test for the BI client method to retrieve a list of OpenHub objects available in a SAP system looks like this: 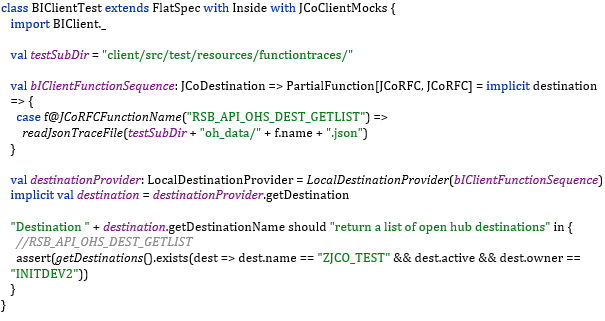 This test implementation uses a trace of an RFC call stored in a json file to retrieve the list of OpenHubs without establishing a connection to a SAP system.
For generating test data, one has basically two options:

SAP JCo and IDoc provide basic APIs for a flexible and extensive interaction with SAP Netweaver application servers. We have implemented i-OhJa as a Scala framework for being able to use SAP JCo in a functional, typesafe and easy way. Furthermore, it simplifies accessing and transforming data transmitted via RFCs. We have successfully utilized it in a Big Data scenario using Apache Spark to integrate streaming pipelines with SAP Netweaver systems. This kind of integration is much more flexible compared to simple JDBC drivers with direct database access and allows to combine any kind of services and processes available in Java and SAP Netweaver based systems.