A Look Back: SAP Business One®

As we celebrate the 10th Anniversary of SAP HANA, I want to share some historical musings on SAP Business One®, which works with and is powered by SAP HANA.

SAP Business One has more than 65,000 customers and over 1 million users in more than 160 countries. More than 5,000 new customers are added every year as on-premise, subscription and Cloud hosted by SAP.

But it all started 25 years ago in Israel with a company called Ocek. (Figure 1.) That core technology was acquired by SAP in 2003 and soon became SAP Business One.

In 2011, I was asked to lead a go-to-market project for the SAP Business One solution. Up until that time, the ecosystem of 700+ partners was installing and implementing the solution on Windows servers, SQL servers even laptops. To be ready to go to the market, an important piece was missing – the certified appliance in which every SAP HANA solution needs to run. 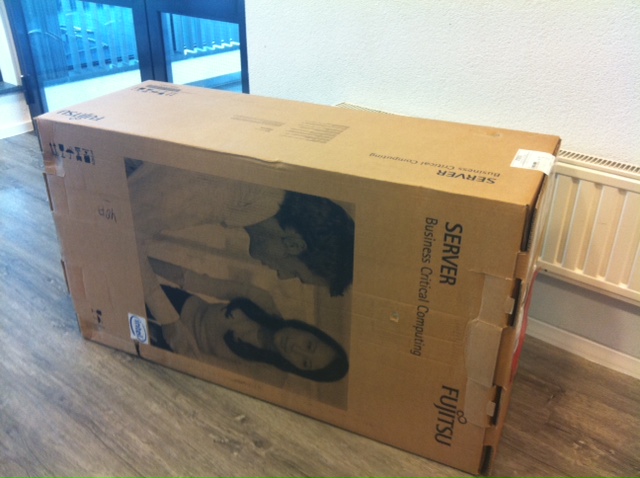 Fujitsu stepped forward and immediately engineered a server for SAP Business One. It had a two socket Westmere EP and 48GB of memory, making it the smallest ever server for SAP HANA and the beginning of the 2 sockets era. (Figure 2.)

At the time, I remember asking Addi Brosig for help defining a reference architecture with 16GB of RAM. “SAP Business One will never need more than that,” I said to Addi. A few years later, Addi reminded me of my words when we were asked to go beyond 1TB of memory.

We released SAP Business One analytics powered by SAP HANA on February 29, 2012. One week later, at Cebit 2012, our team presented the solution to Hasso Plattner. Volker Anders did a live demo (Figure 3) and Andreas Wolfinger drafted a contract for the first German customer (Figure 4). 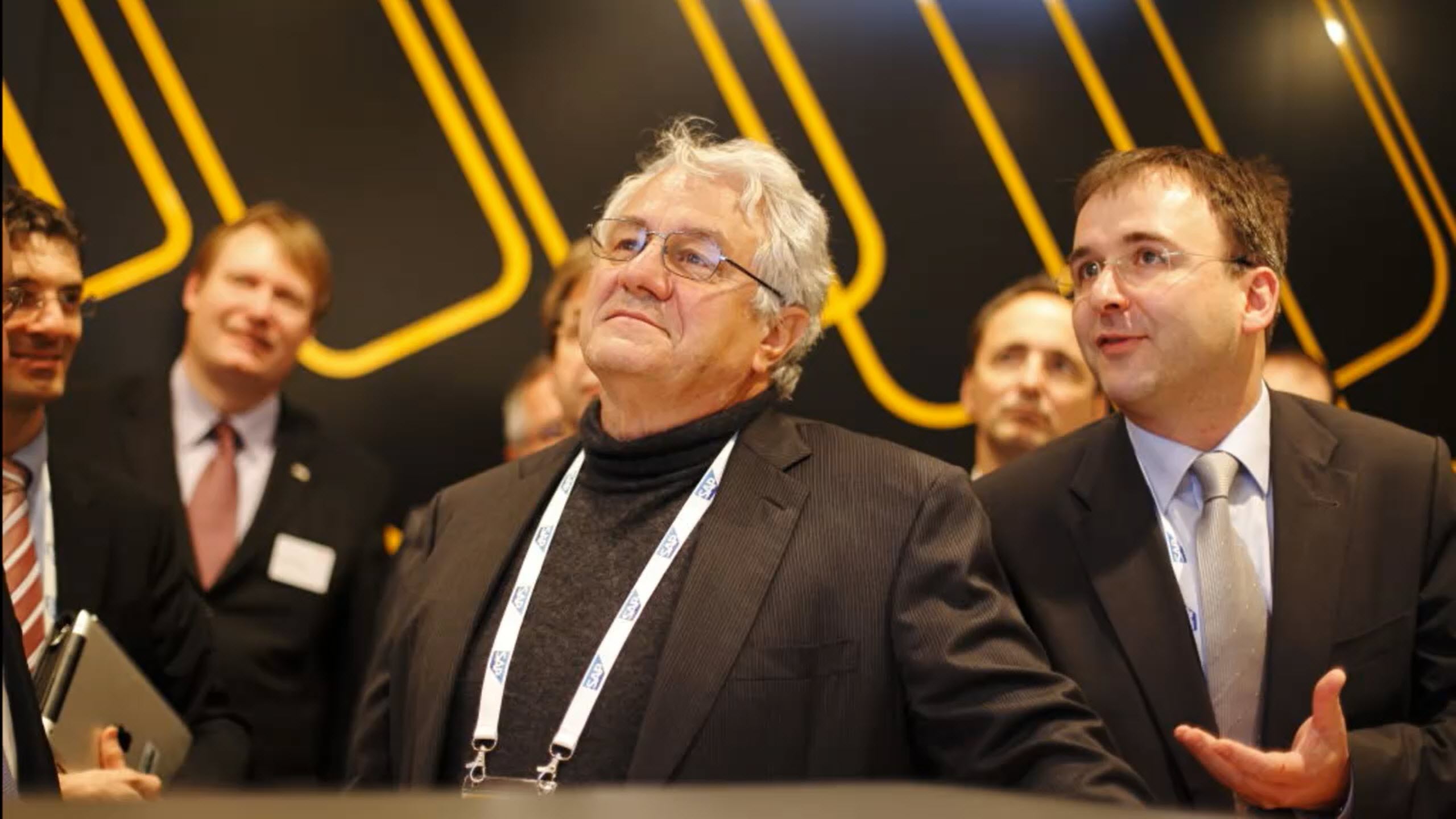 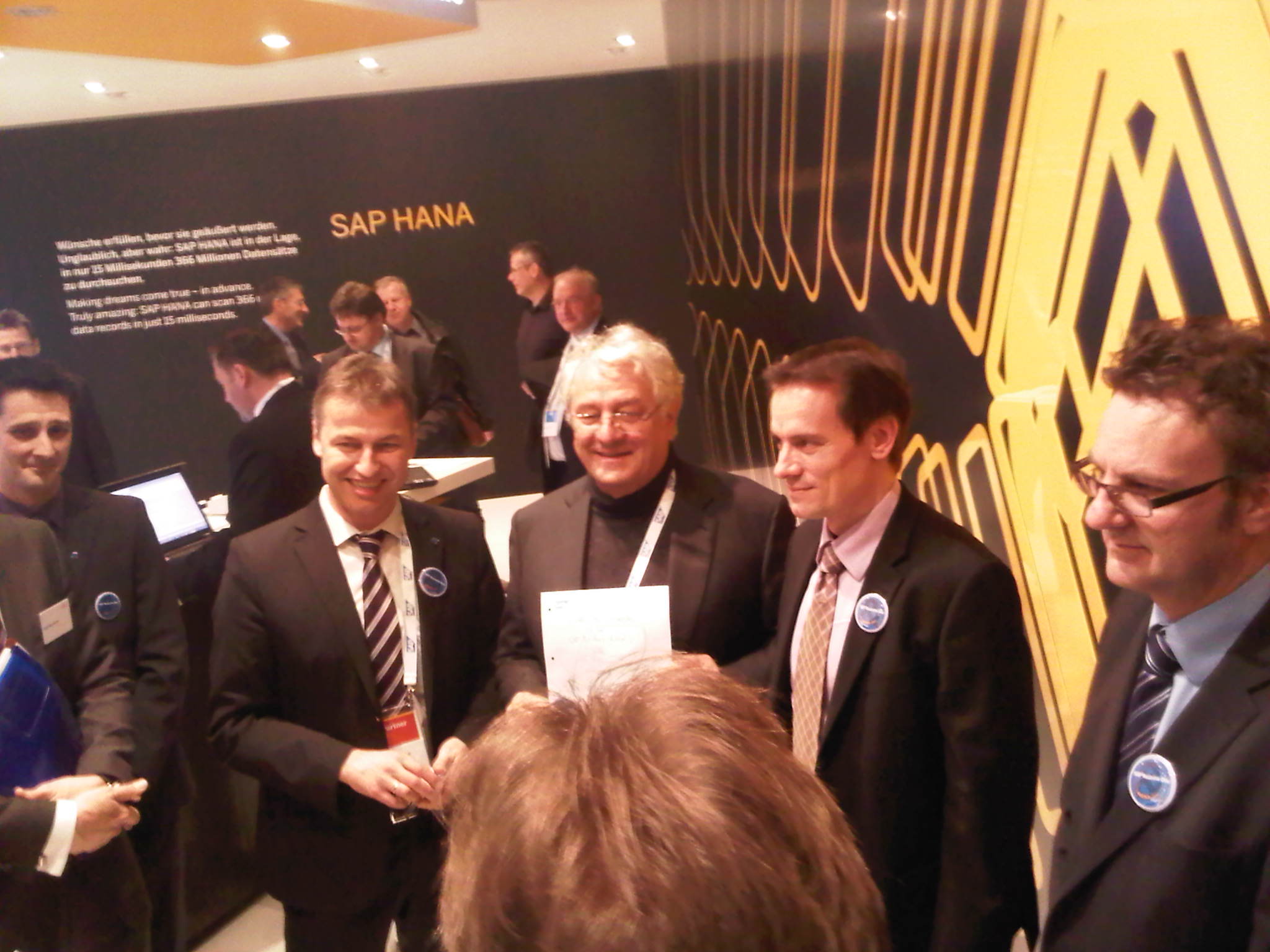 In July that same year, we were invited to represent SAP Business One at the first SAP HANA Council, held in Potsdam at the HPI. The main message to an audience of large enterprise customers was that SAP ERP was running on SAP HANA.

On stage, Juergen Mueller and Ian Kimbell did a demo of a cash flow forecast and advanced ATP scenarios, which became new features for SAP Business One, version for SAP HANA (running on a Mac Mini) that was released September 2012 as the first ERP fully in-memory in the world.

Growing consistently over the last 8 years, SAP Business One reached 50% of the net new customers on SAP HANA in 2019, with more than 2,500 new customers booked. But this wouldn’t have been possible without the enablement of our ecosystem. Our partner SUSE provides preconfigured software images and made available multiple SUSE Academies for Certified Administrators, to accelerate the transition of a Windows/SQL oriented ecosystem to Linux/SAP HANA.

The Business One Solution Expert team (now GPO SME Partner Enablement) delivered hundreds of SAP HANA workshops, data modeling clinics and coding for extensibility sessions to remove any resistance from the consultants that got convinced when extensions with hundreds of SQL code lines could easily be built with just few lines, by leveraging standard SAP HANA libraries with much faster results (we have cases of customers that for the same ‘Credit report’ instead of more than 2 hours they now take less than 20 min).

Since the use of SAP HANA, SAP Business One has a superior message, that is being used to win deals against competitors and give customers more value and satisfaction with their system!

Happy Birthday from the best kept secret powered by SAP HANA – the SAP Business One solution.

I hope you enjoyed this blog post! Please let me know your stories about SAP Business One, version for SAP HANA in the Comments below. I will tell few more in the following days.

Congrats! Grandiosity of this excellent work.

Thank you Gabriela! You are also an excellent part of this work!

Excited about Version 10 as you and your team makes HANA better and better.  Thanks Steve

Thank you Lou. We are also excited and looking forward to more and more innovation.

I was lucky one attending first SAP HANA summit at HPI to see the show live.

It has inspired me to look for new horizonts, what we can do for our customers with SAP Business One on HANA.

Indeed! And do you remember that I had to shorten my breakout because I was feeling very sick? I just remember spending the rest of the day in a clinic in Potsdam and losing my flight. ?

thank you for being with us in this awesome journey!

Yes, but you have recovered shortly, right

It has been an amazing journey Steve!!!

Beginning with the first B1 Certified Fujitsu server, developing our partners, bringing our customers innovation and business benefits without precedent. Today HANA is one of our main and key value differentiators.

Through this journey, there has always been a constant, Steve´s support and guidance. Without any doubt Steve´s passion, commitment and professionalism have been key for all those achievements.

Thank you for your kinds words. You know that a transformation is never done by a single person, but by a great vision executed by a great team and you, together with the our Local Product Experts, Sales team and an amazing SAP Business One ecosystem, helped making this happen.

We are again in the early stages of a new transformation, with the Intelligent Enterprise @ SME.

thank you for the great overview of the journey and that SUSE could be part of it.

I happily remember the times where we build the first pre-installed image for BusinessOne and later on showcased it the first time at a Summit.

Congratulations for all what you and the team has reached.

Thank you Peter, for your comment. Your great collaboration is linked to our success! Today, with more than 10.000 customers, and thousands of consultants trained, SUSE can say it is the foundation of this transformation.

Dear Steve, great recap of the journey, we are so impressed with this technology that we at Consensus embraced it from the beginning. With assistance of the SAP team we implemented the first SAP Business One for HANA customer in North America, SAEG Engineering, which went live on November 2013. Nowadays we sell over 90% of the solution on HANA so our customers can benefit from the analytics and the technology behind it.

All the best, and thanks to all og you for the support during this journey...

Thank you for this feedback and thank you for the incredibly work that Consensus did since the early days of SAP Business One version for SAP HANA.

We all know that new solutions mean uncharted territory and this requires great resilience. Thank you for that too.

Regarding SAEG, please send me an email with their current situation. Which improvements they got for the solution, etc. We could check with Paulo if we could record a video with your first HANA customer.

In Consensus (Former TCE Colombia) we sold the first project in May 2013. At that moment we had to do everything through Command Line, even Backups, restores and all the database options.

Even with the normal problems of an innovative product since 2013 we have sold almost every deal with HANA, we just sold SQL when the client had the infrastructure and SQL licensed, no more than once a year.

Thanks for the support You, Miguel Angel Bermudez (LPE Team in Colombia) and Marco Blanco (Solution Arquitect) gave us when we had problems with our projects because of the lack of expertise we had at that moment.

In 2013 starts the transition of development in SAP Business One, today, we have less than 10% of our development team with knowledge in SDK, it has been a long trip but we have enjoy it.

Thank you very much! I remember very well having Miguel and Marco finding the "stone path" to guide you and the remaining Colombian partners. As I normally say, if it was easy, we wouldn't the expertise of our partners.

Based on yours and other partners' feedback, we worked with SUSE and with our Development teams (B1 and HANA) to overcome those challenges you mentioned. I believe we are much better these days.

Once again, the SAP Business One channel was "called on stage" and told to the world that we are the best kept secret, powered by SAP HANA :-).

Dear Steve, you are unfortunately not reflecting reality and demonstrating some lack of real market understanding. With this outdated thinking, you are more and more overtaken by competitors, even in the low SME, and you have lost the success of the early years.
It's not a good idea to show the long history of a product which hasn't changed much for 25 years, neither in its essence nor in its original code.
Your Hana is absolutely not useful for the lower SME, you have pushed your partners hard, took focus from other important topics. But at least you were able to show small successes on paper, and surely met your KPIs, good for you. The investment in Hana would have been better invested in sustainable changes or a real successor for B1. Now B1 is a real dead end, since long only in maintenance. No successor for B1 will be there, no modern product for low SME. Major changes have been promised for years, but far too few useful ones have been delivered. And all timelines, including Business Application Factory, are not being met. Not a good story.

Thank you for your comment and for your honesty in sharing the other side point of view. I will be glad to meet you over the phone, so that I could understand where you come from and how hard this journey has been to you and your company.

Unfortunately, in these 9 years that I’m working with the B1 ecosystem, your name never came to my desk. Thus, I would really like to meet you.

We had several cases of partners that had difficult first experiences and hard learning curves, but then, with the support of our teams and other peers, they shared their success and appreciation from being in this journey.
Looking forward.