XRechnung, ZUGFeRD and Peppol – All you wanted to know about the electronic invoice in Germany – What is the XRechnung? (part 2/4)

Knowing the context of electronic invoicing, let us now look at Germany. Cash discount is a beloved practice in Germany. It fosters punctual payment for suppliers and enables good return on cash for buyers. Unfortunately, the EU/CEN standard had classified cash discount data as superfluous. It was key to local adoption to solve that issue.

Luckily, countries are allowed by Peppol to create their own implementations. XRechnung (X-Invoice or cross invoice) is the local guideline for Germany, its Core Invoice Usage Specification (CIUS). XRechnung adds fields for cash discount to the EU standard and specifies whether certain fields of the EU standard are mandatory or optional for Germany. The technical terms for this are: 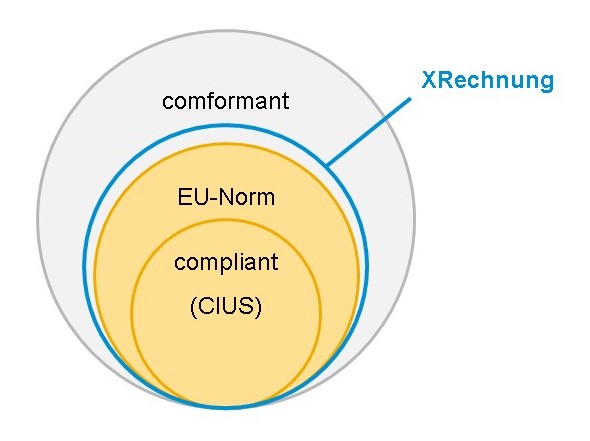 Specifically, this means that a German authority must be able to receive the syntaxes from the EU standard but also from XRechnung, so not just two syntaxes, but four. That is ok as additional discount fields can easily be dealt with in incoming invoices.

If it was not for ZUGFeRD, Germany would now be perfectly in line with the intentions of Directive 2014/55/EU and there would be a clear path (a motorway) towards Peppol. The third part of this series therefore has to deal with ZUGFeRD.