We happened to start few projects over the last few months and while talking to the team about the instance management strategy I realized there was a lot of confusion on how to approach the decision to decide which instance should be development and which should be quality/testing within a 2 tier or 3 tier setup.

So after approximately 7 years of SuccessFactors consulting i finally decided to write my first blog and it wasnt too difficult to decide on the first one.

In order for us to place the instances correctly, we need to take one step back and understand the difference between a Preview & Productive data center (DC).

Like we have a Development (DEV) Instance and Production (PRD) Instance, Similarly we also have very similar logic for our Data Centers.

Preview Data Center: Preview Data Centers act as our Quality Assurance/Testing (QA/TEST) Instance for the Preview data center because We get the updates of the planned quarterly/half yearly (Going forward) releases a month in advance. Till we had the quarterly updates we used to get the updates in the preview instance a month in advance. However, With the half yearly releases it is 2 months before the Productive DC release date.

Once partners & customers have the release updates in the Preview instance before the Productive Instances then they can test the new features here.

With the early releases from Preview DC’s, the Productive instance will not be in Sync with the Preview instances for at-least 4 months because of which it will be a challenge to have the preview instance as a QA instance within a 3 tier design. QA Instance needs to be an exact copy of the Production Environment to facilitate smoother testing cycles. 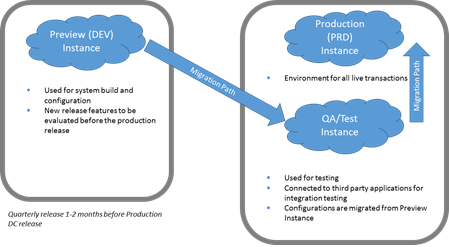 Do let me know your views/suggestions on this blog. Do not hesitate to write back if its adding on to your confusions as well !

Thanks a lot Berlinda..Appreciate it 🙂

No doubt this is a piece of good information, way to go Rithin. My favorite  part is Recommended Landscape (With Employee Central)

Thanks a lot Praveen..Glad you liked it 🙂

Thanks a lot Deidre 🙂

Thanks a lot Tejas 🙂

Thank you Nilesh, Glad it was helpful for you 🙂

I'm new in SF's and going to implement SF's Employee Central module. So please help on this.

Like we have 3 systems - DEV, QAS, PRD for ERP system.

Do we need the same for sucessfactors implementation?

If yes, then what are the things required to configure the same.

I am not very sure how do you mean this. Can you please elaborate?

I just want to know that what are the things I will need to start implemention of employee central?

I got the responsibility to work on implementation of employee central from scratch and I'm completely new to this.

We use 3 systems - DEV, QAS, PRD for ERP platform. Do we need same systems for success factors also or we need to use single system for development as well as for production?