I vividly remember my first data warehouse project. SAP BW 3.5 was just released and I was tasked with the objective of replicating billing documents from SAP R/3. It was a true learning experience and I was very proud to finally see data flowing into the infocubes. Fast forward a year and my initial haphazard approach was growing tough to support. Not to mention the fact that query performance was a common complaint. My manager at the time wisely took note and made the decision to send me to SAP BW310 – Data Warehousing. In this class, I was first introduced to the concept of the LSA and the layered approach to data warehouse architecture.

SAP defines the reporting layer as a logical grouping of “objects that are used to perform queries for analysis.”

I can attest to the benefit and cost of an adequately performing reporting layer. On the benefit side, my users enjoyed acceptable query performance. However, the cost of that user satisfaction would require regular intervention on my part such as:

I propose that anyone facing a similar scenario (but not ready to migrate an entire SAP BW system to SAP BW/4HANA) should consider transforming the reporting layer using SAP DWC. Since SAP DWC runs on SAP HANA and SAP DWC is a cloud service, one can quickly reap benefits like simplifying the data architecture and enhancing query performance.

To make the “swap” to SAP DWC, plan to replace data providers within the reporting layer with tables and views within a DWC space. Note: a DWC space is a container object (similar to an infoarea) that stores tables, views, and other objects.

A modified BW LSA architecture that incorporates SAP DWC spaces for the reporting layer might look like the following: 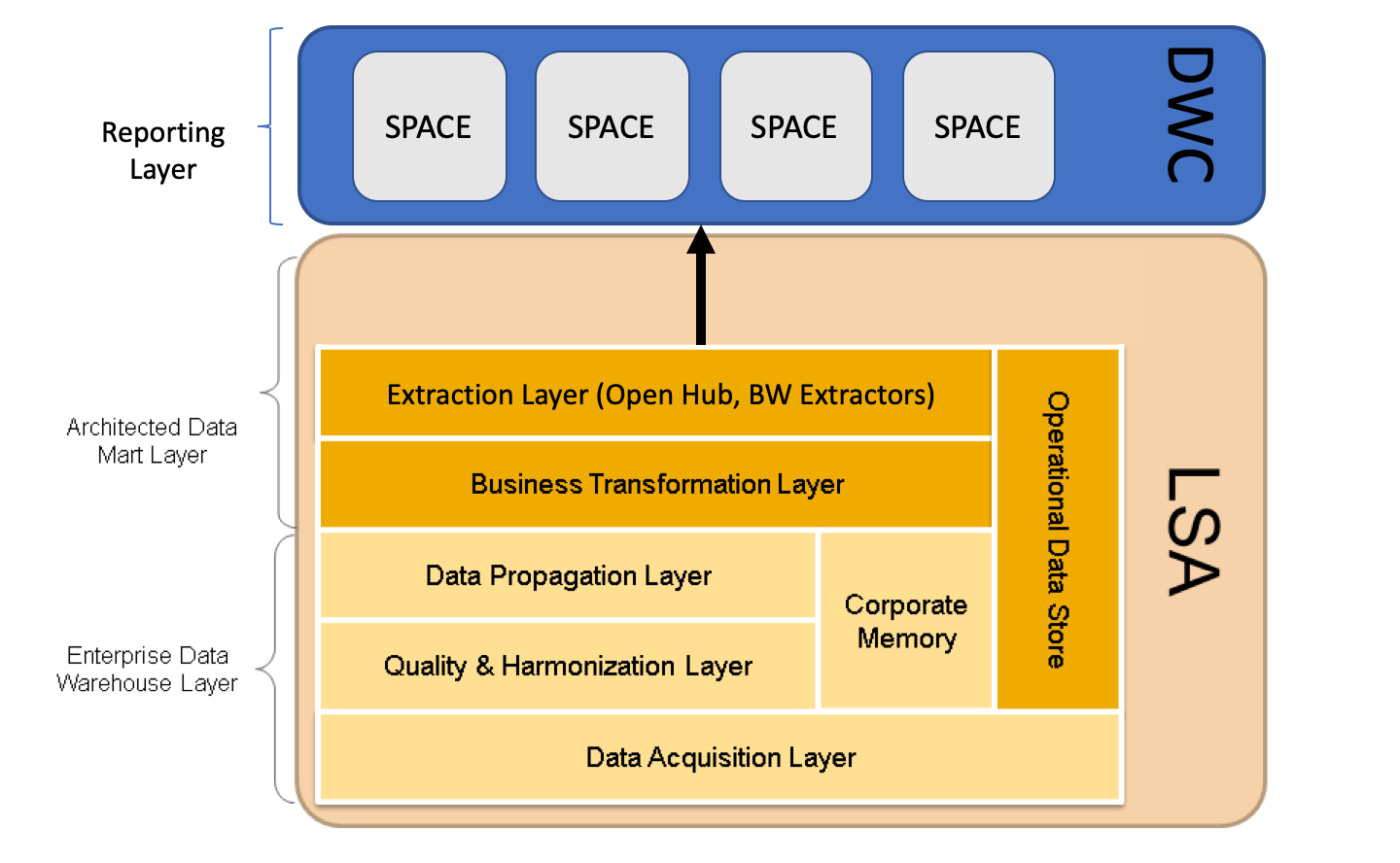 Before and After Example 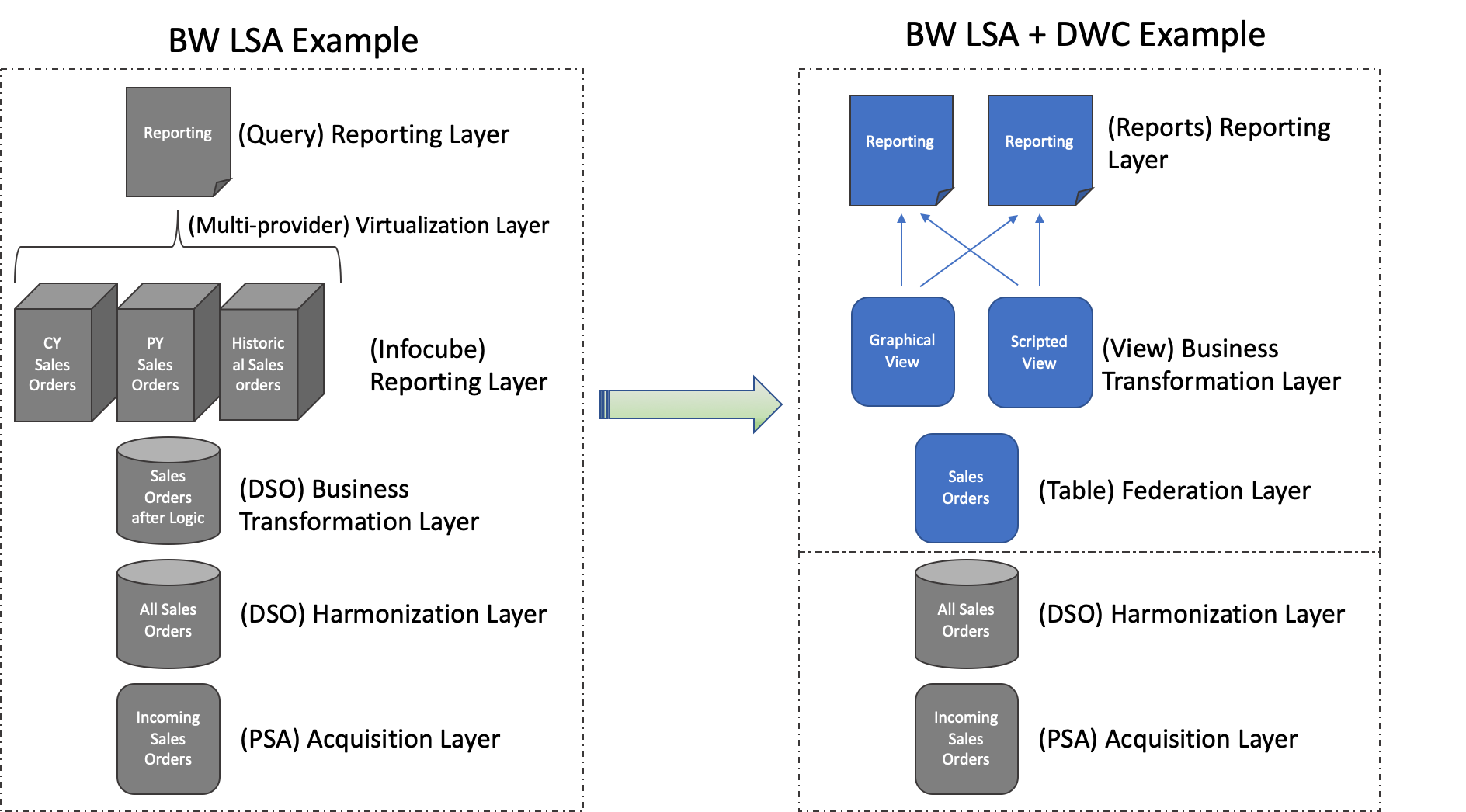 Looking back on those initial years of data warehouse development, I now appreciate the positive impact in-memory technology can have on a SAP BW system. The LSA concept works very well but eventually the underlying data storage technology becomes the bottleneck affecting all layers of the LSA. For a BW system running on a traditional database, SAP DWC may offer the right next step to restore performance and simplicity – all beginning with the reporting layer.

For more information on SAP Data Warehouse Cloud or to start today with a reporting layer that can drive innovation, check out the following links:

A good read that demonstrates how SAP is always looking for ways to push the envelope instead of resting on past innovations. SAP Data Warehouse Cloud, while new to the marketplace, shows a lot promise for all lines of business and all industries.

Thanks for sharing your knowledge and experiences Daniel.  Many of us can relate.

Thanks for this blog about SAP DWC, as it can be helpful in BW and Hana models. However I had a question that does DWC support the Table Entity-Relationship model from the ECC? like table relationship etc as it will provide an edge to the SAP DWC to when compared to other cloud data warehousing tools.

I really appreciate your answers.

SAP Data Warehouse Cloud does include an ER Diagram designer so that you can create custom models. One of the features of the designer is the ability to import CSN files from SAP PowerDesigner. In the case of your question, you may consider importing the relevant portions of the data dictionary into SAP PowerDesigner and then export into SAP Data Warehouse Cloud via CSN file.

This is very informative and useful.