A Decade of Growth 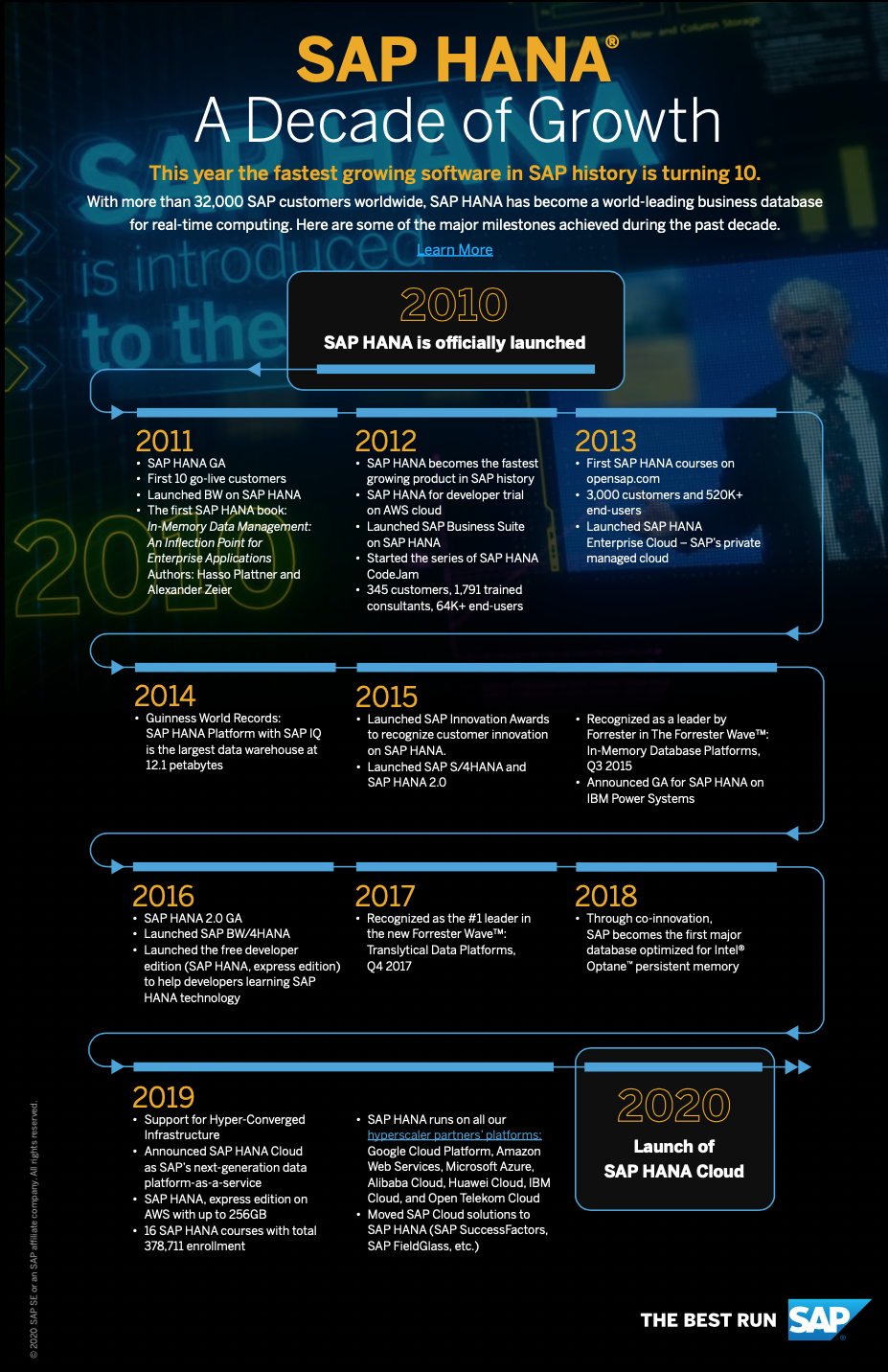 SAP’s founder Hasso Plattner inspired me to do an experiment we dubbed Hana, for Hasso’s new architecture (and also a beautiful place in Hawaii), our teams working together with the Hasso-Plattner-Institut and Stanford demonstrated how an entirely new application architecture is possible, one that enables real-time complex analytics and aggregation, up to date with every transaction, in a way never thought possible in financial applications. – Timeless Software by Vishal Sikka (2008).

Vishal Sikka was employed by SAP from 2002 until 2014 and was its very first CTO. Dr. Sikka recalled in a later blog post that the HANA development project started in the fall of 2009 but research on in-memory database had started years earlier. Research was done at the Hasso Plattner Institute (HPI) founded by Hasso Plattner in 1998. He also gives his name to the Stanford School of Design Thinking and both institutes work together closely. Dr. Plattner was actively involved at the time with the in-memory database project as attested by the SIGMOD paper: A Common Database Approach for OLTP and OLAP Using an In-Memory Column Database (Hasso Plattner, 2009).

Listen to a HANA history lesson: An Introduction to SAP HANA by Dr. Vishal Sikka (openSAP, 2014). 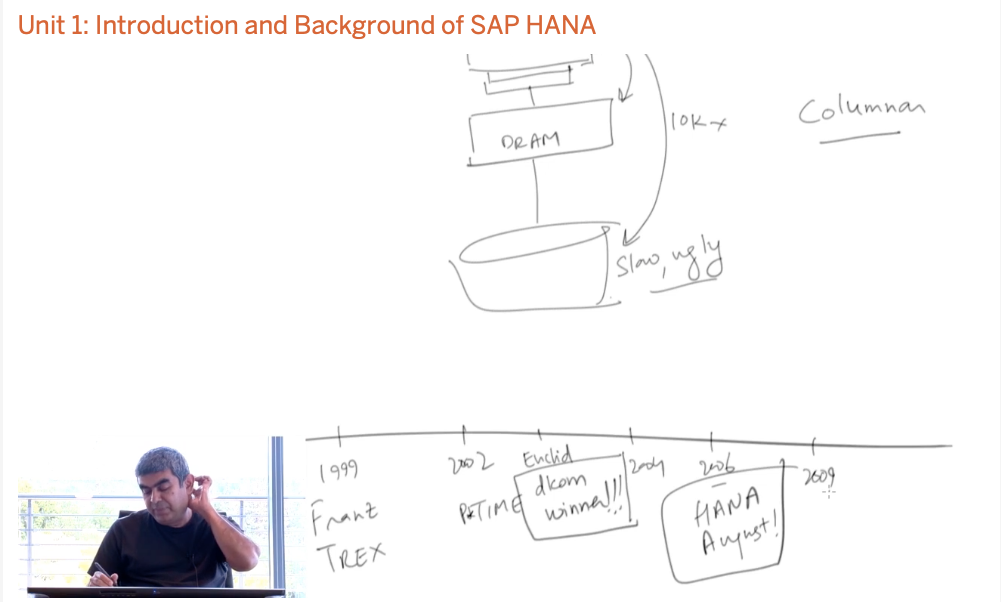 Sikka mentions some of the building blocks:

In 2012, HPI premiered the MOOC concept in Germany by making Plattner’s course available online for the masses. You can still join to study In-Memory Data Management (2017 edition). 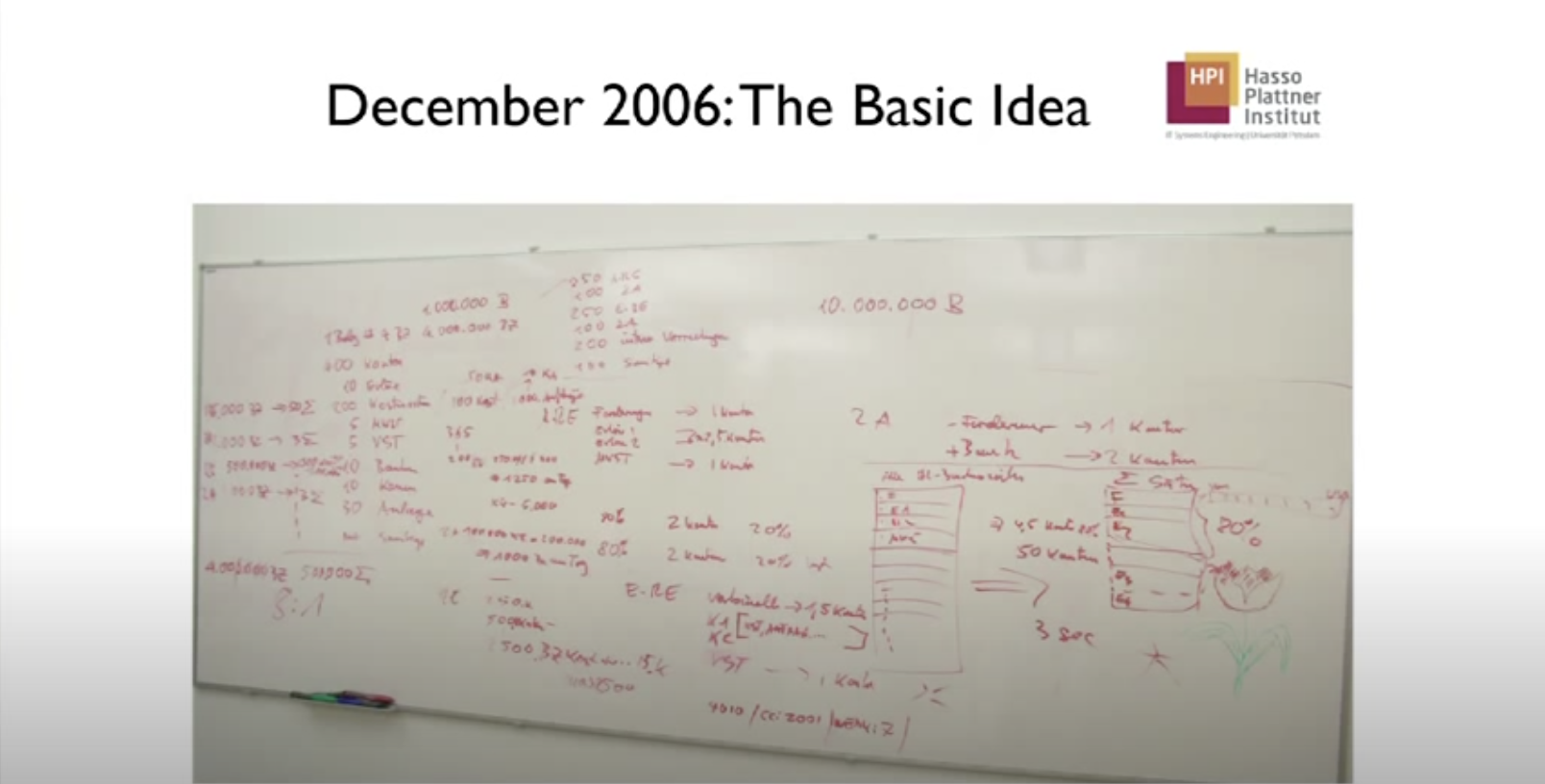 In the first two years SAP HANA quickly evolved from an in-memory appliance into a platform. SAP HANA Extended Application Services (XS) web-enabled HANA by adding an application server, a repository, a development environment, SQLScript, an SAPUI5 SDK, and other tools to facilitate native app development. A paradigm shift, nothing less, was announced and soon we would hear about code-to-data and code pushdown with CDS (core data services). 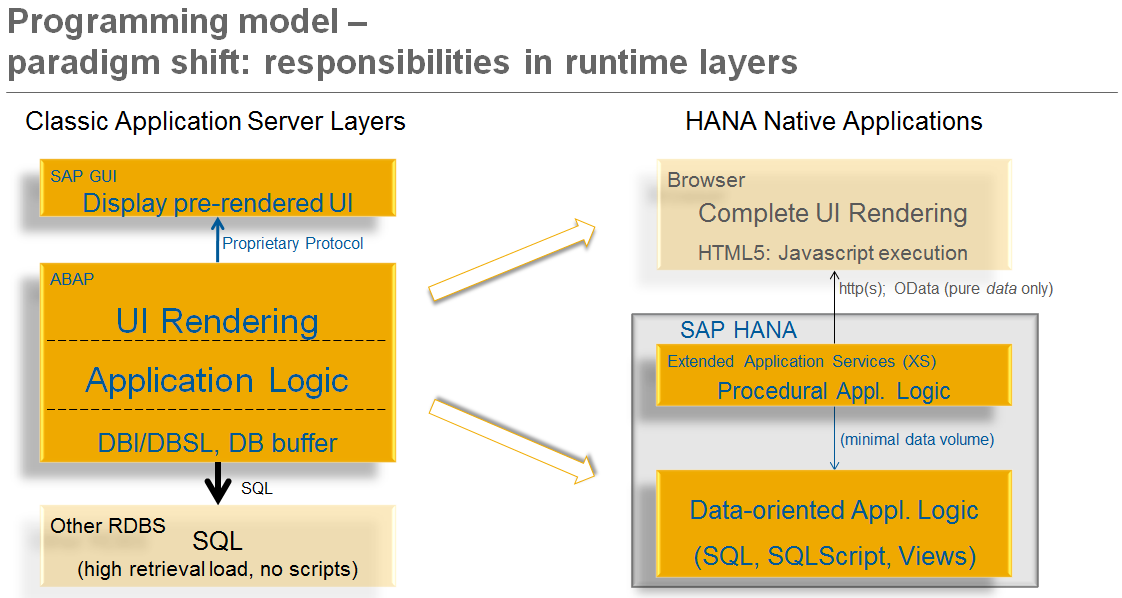 SAP HANA was part of the real-time data platform (RTDP). We wrote about this in a previous post when we told the SAP Big Data story (2010-2020)

To develop applications using all these technologies, connecting the enterprise with Big Data and IoT, SAP reached out to its partners and the developer community at large with the SAP Startup Focus Program in 2012 (now retired and part of SAP PartnerEdge), a startup forum (SAP Holding Startup Forums To Develop Ecosystem For HANA — The Company’s First Ever Platform Play), a bus tour (SAP Big Data Bus Part Of Overall Effort To Build Developer Community), and SAP HANA Idea Incubator program now Idea Place.

As part of the startup focus, the SAP HANA Academy was launched 2012, providing free YouTube-based training for developers. The inspiration was the Khan Academy sharing the same mission: to provide a free, world-class education for anyone, anywhere. The HANA Academy reached 100,000 views its first year and now counts 60K+ subscribers with close to 10 million views (all channels combined).

Almost instantly after SAP HANA was launched the first business applications became available to take advantage of in-memory processing, like Advanced Planning & Optimization (SAP APO). For the big fish a bit more patience was needed but SAP Business Warehouse came first in 2012, followed one year later by the Business Suite.

In the next round, applications would no longer be just powered by SAP HANA but developed specifically for the platform (and run on nothing else). This time the BW/BS order was reversed.

For the cloud SaaS solutions acquired in the early 2010s, it would take a little longer but now all SAP software runs on SAP HANA.

In 2014 and with the 5-year anniversary release SPS 10 (June 2015), the scope was expanded and the releases themed as the Platform for All Applications. For each release, SAP HANA product management now organised Live Expert Sessions (LES) as with What’s New in SAP HANA SPS 08. In addition, more in depth courses were offered by openSAP (twin-sister of openHPI) often presented by HANA product management.

For application development specific (native) to the SAP HANA platform, a new application server environment was added to the platform in 2015 (SPS 11), called XS Advanced (XSA).

The initial implementation was now labeled the classic version but apart from name and function (like Java and JavaScript), the environments had little in common. XSA combines Cloud Foundry technology with HANA database development and it would soon power all native HANA applications. You can think of it as CF/4HANA. SAP was an early sponsor of open-source Cloud Foundry and the technology is central to SAP’s Cloud Platform. 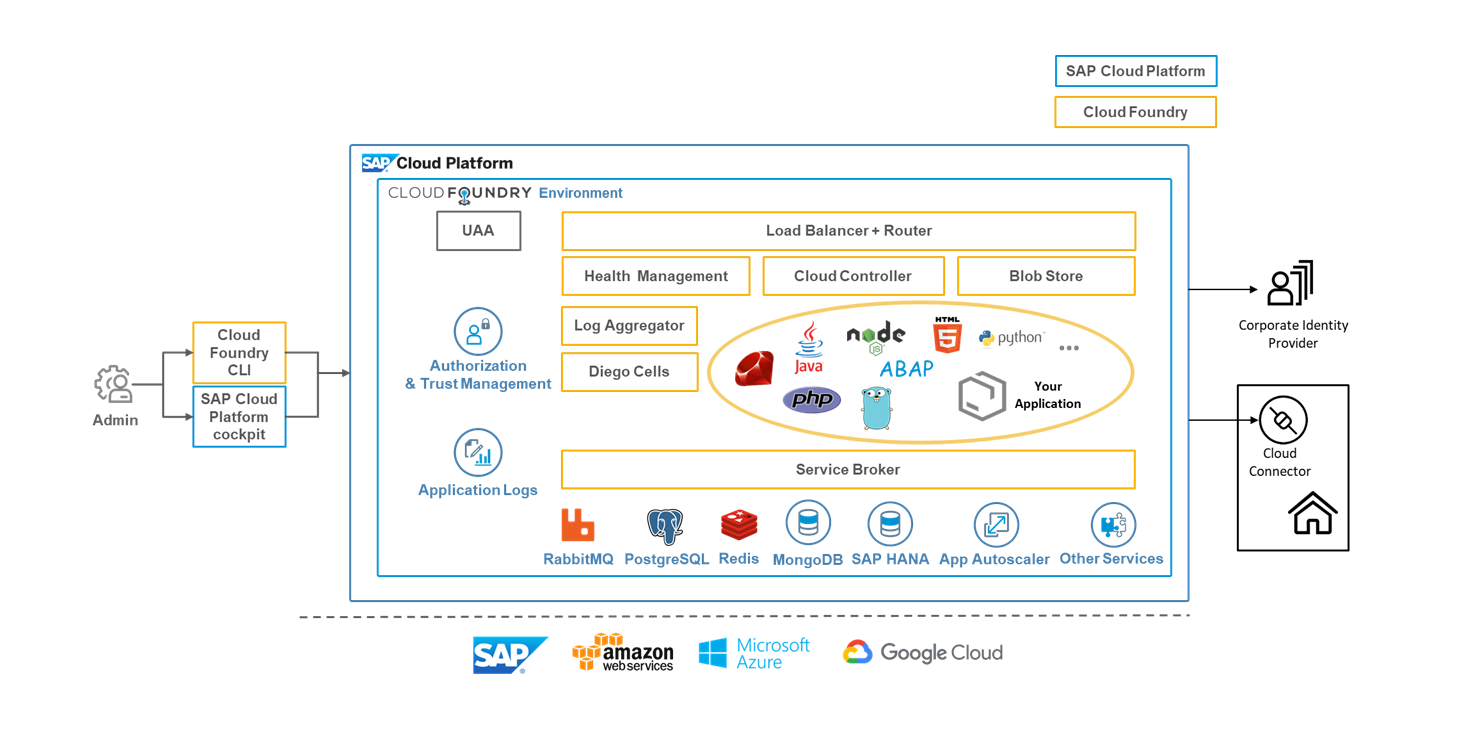 Much anticipated and highly welcomed by the developer community was the SAP HANA, express edition, “a streamlined, downloadable version of its in-memory platform optimized for fast and continuous development of data-driven applications“.

You Spoke, We Listened

The rapid innovation cycle with a new SPS release each six months provided a challenge for many to keep up. After SPS 12 there would be no 13 but a mayor new branch instead: SAP HANA 2. Bi-modal IT was to buzzword at the time and for SAP HANA there was now a HANA (mode) 1 for operational systems and a HANA (mode) 2 for innovation: You Spoke, We Listened: Updates to SAP HANA Release and Maintenance.

As announced last month (April 2020), with SAP HANA Cloud and HANA 2.0 SPS 05, a similar approach was taken: Planned Release of SAP HANA 2.0 SPS05 and Impact on Maintenance for SAP HANA by Bare Said

SAP HANA 2.0 – The Next Generation Platform

SAP HANA 2.0 SPS 00 was released in November at TechEd 2016. This was, as before, 6 months after the previous SPS. Technically, in other words, this was a minor update just like all the SPS releases before. Marketing-wise, however, it was a major release announced as the next-generation platform for digital transformation.

We already covered this topic in two previous blogs, so if you want to read more, visit

In brief, distinct technological characteristics like the SAP HANA XS Advanced (XSA), tenant databases (MDC), development IDEs (Eclipse versus web) are all common to both versions. The difference is found in everything that was added to the platform since, like persistent memory, active/active read-enable replication, data anonymization and data masking, SAP HANA cockpit, native storage extensions, etc.

SPS 01 and 02 were released just a couple of months apart in the spring of 2017. Since, the SPS releases for the on-premise platform edition have an annual release cycle with 2 years support. Did innovation slow down? No, innovation turned cloud-first. 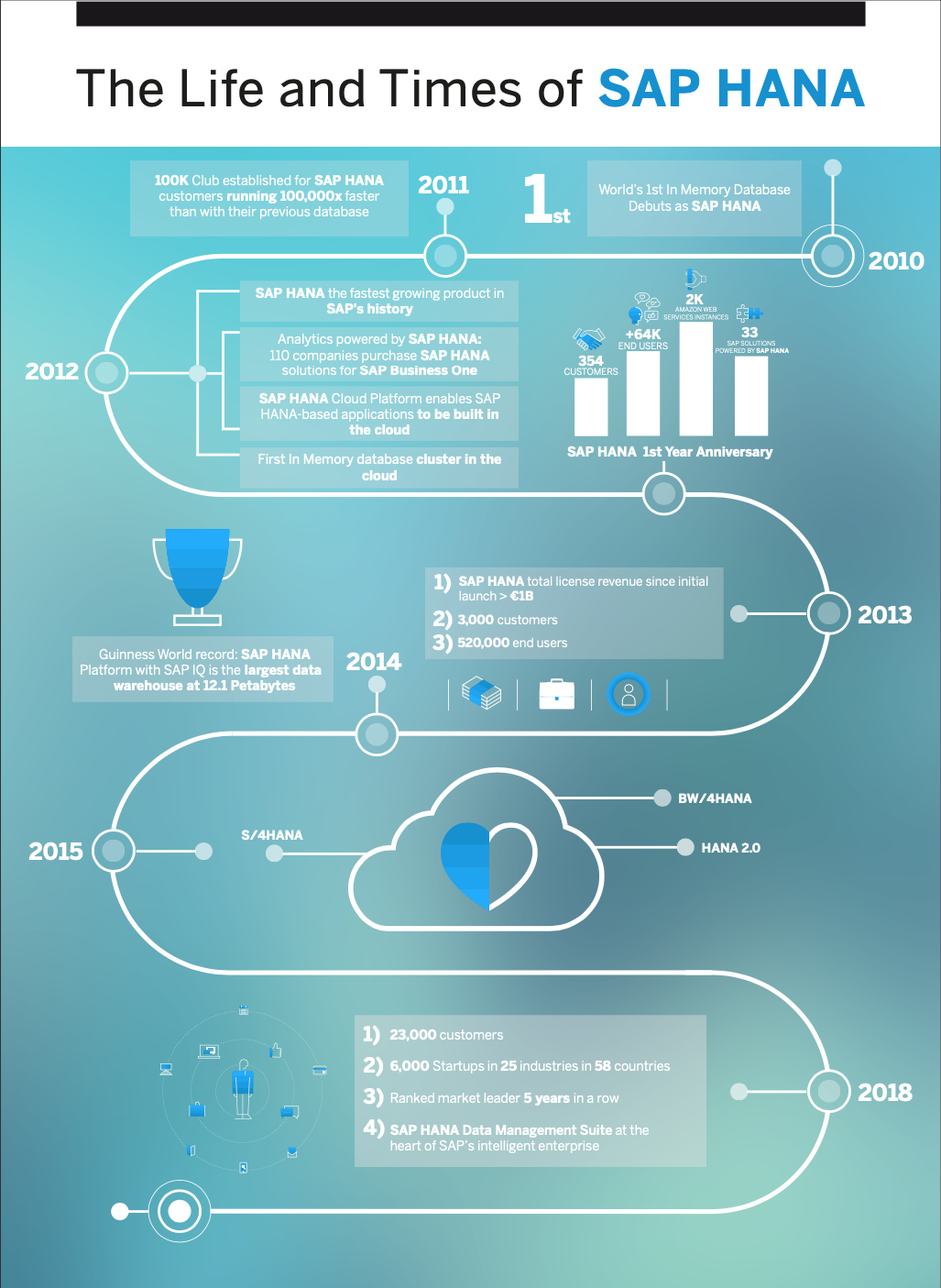 A Strong Foundation for Continued Innovation

The latest release SAP HANA platform edition release is SPS 05 from June 2020. It was tagged as a Strong Foundation for Continued Innovation.

For more information about this release including hands-on tutorials, see 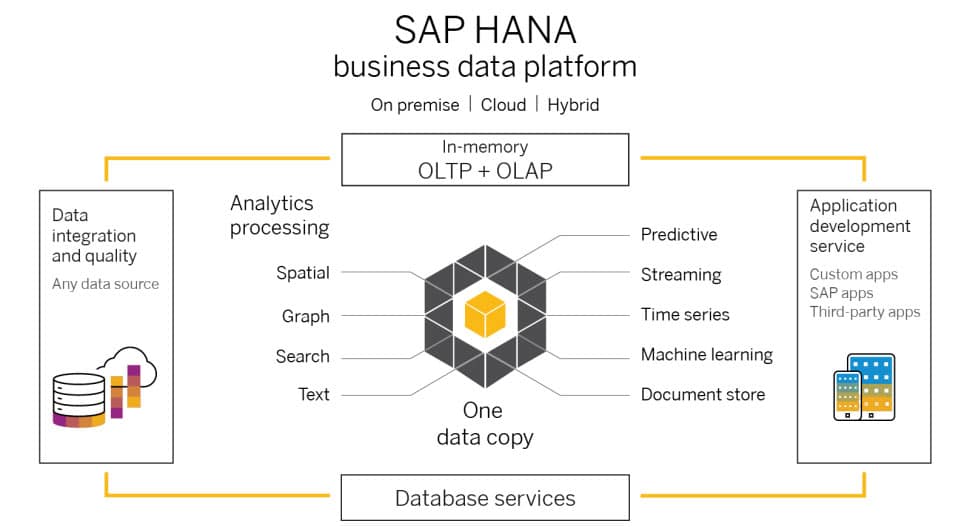 SAP HANA in the Cloud

SAP HANA (as a) Service

After the SPS 03 release of April 2018, innovations for the SAP HANA platform were released cloud-first for the SAP HANA Cloud Edition, one of three environments for the SAP HANA Platform, SAP HANA Service. The cloud story of SAP HANA started with SAP HANA One in 2012 on Amazon Web Services and as DBServices on the SAP (HANA) Cloud Platform. For the full story, visit

Technically, the SAP HANA Service was still lift-and-shift: running on-premise software on a virtual machine in the cloud. It also continued the SAP HANA 2.0 branch. With SAP HANA Cloud a new direction was taken: SAP HANA is now container-based and cloud-native. For the full story, visit

SAP HANA Cloud addresses the challenges caused by an ever expanding the global data sphere.

To get started, visit 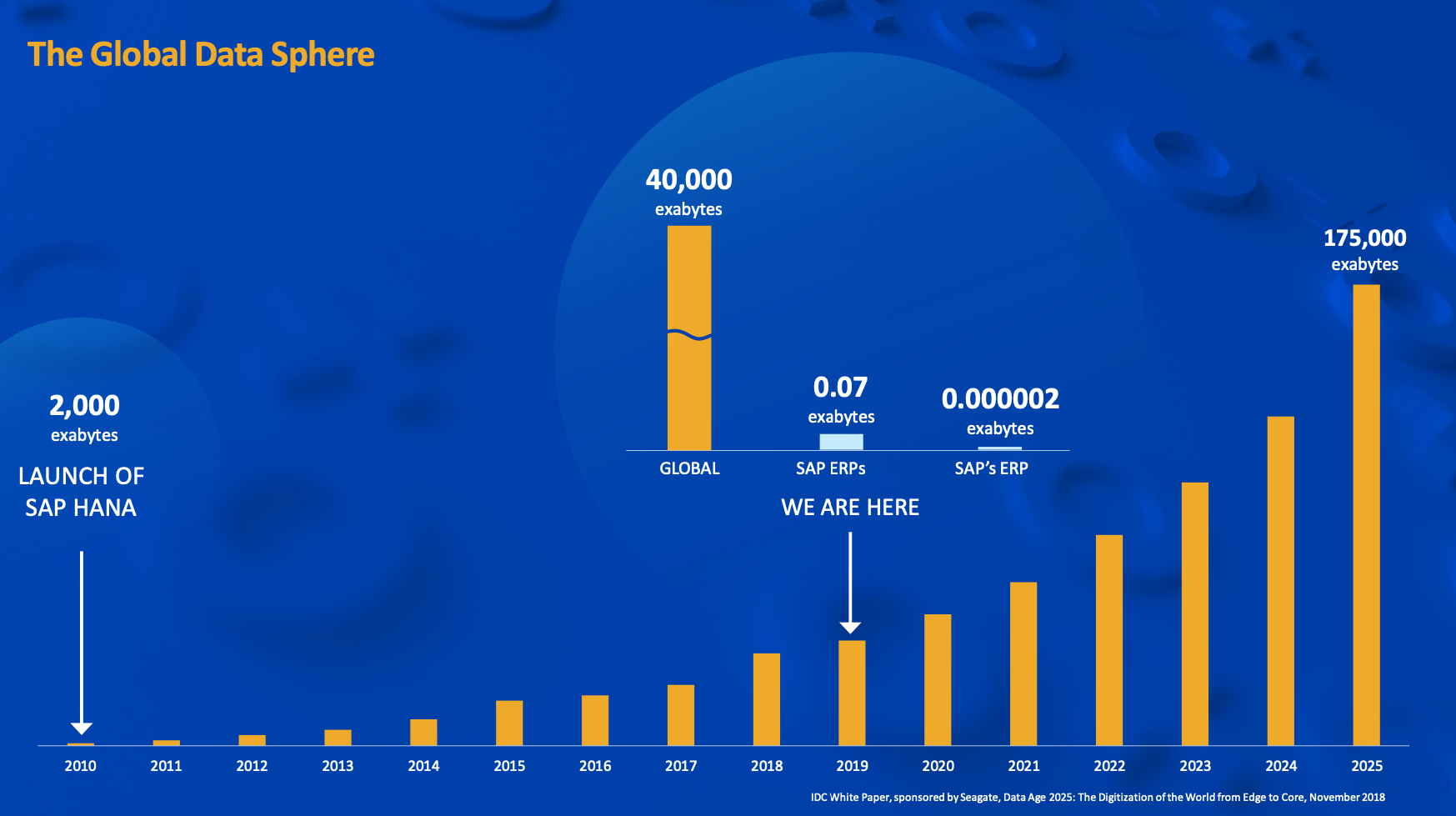 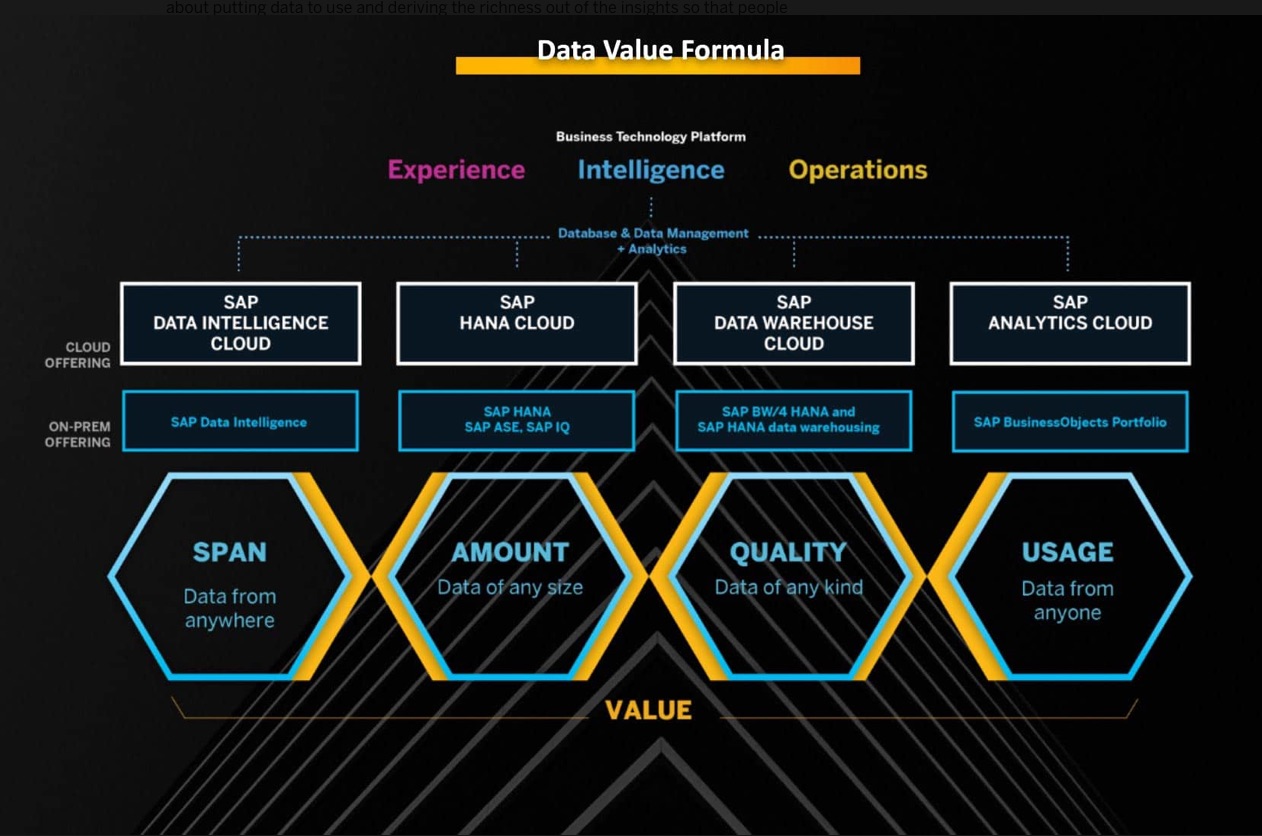 We started this blog with a bit of early history about SAP HANA with the research performed at several universities. One of the HPI students at the time was a young Juergen Mueller who recently reminisced:

While I was working on my PhD on new applications optimized for in-memory databases at the Hasso Plattner Institute (HPI), I had the opportunity to present one of the first SAP HANA demos, a dunning app, developed at the HPI for SAPPHIRE in 2010. – The SAP HANA Revolution by Juergen Mueller (SAP News, March 2020).

Mueller joined the SAP board as CIO in 2018, now CTO, and presented the business technology platform for the intelligent enterprise last year at SAP TechEd.

After being on the centre stage for many years, HANA now plays a more modest role as one of building blocks under Database & Data Management for the Business Technology Platform.

Thanks for thus Blog, and btw. where do I get this timeline poster?

HXE, cloud and a shell, RPA, Fiori and BW: It is great fun to dive in and compute 😉

The images will decorate the office walls.