Working from home – a newbie perspective

Before the corona virus entered the stage I wasn’t regularly working from home even though I could have done it just like most of my colleagues who do it about once or twice a week. For me, the motivation just wasn’t big enough to do it on a regular basis as I usually just need about 30 minutes from leaving my home to reaching my desk in the office. (unless there are issues with the commuter trains I rely on). There, I obviously have a proper setup with a large screen and ample space for all the stuff I need, while at home it would be somewhat crammed in a not centrally heated room. So, up until recently I only worked from home rarely and perhaps when I had caught a cold and just didn’t want to bother my colleagues with too much coughing and/or sneezing!

Starting to work from home

So, enter COVID-19 and the strong recommendation from our IT-management on March 12 to work from home if possible starting immediately and until further notice. As this directive obviously made a lot of sense to help with social distancing I packed my stuff – basically just the laptop and power cable! – on Thursday afternoon and set up shop at home on Friday. In order to heat my new “office corner” I put a small electric radiator under the desk which helped a lot with feeling comfortable. I already had a proper office chair so was all set to dig in!

The first two days were nonetheless a bit uncomfortable as I only had the laptop to work with and no big screen. So one of the first things I did was to order a large screen, an external keyboard (one of the ergonomic “natural” ones) and a hub to connect everything as needed. I of course could have gotten that equipment from work but I had entertained getting such a setup for my private use anyway, and it was the quickest way to get what I needed. The equipment arrived on Tuesday and much to my surprise turned out to be plug and play with me perhaps needing about 30 minutes from opening the box and having everything working just fine! 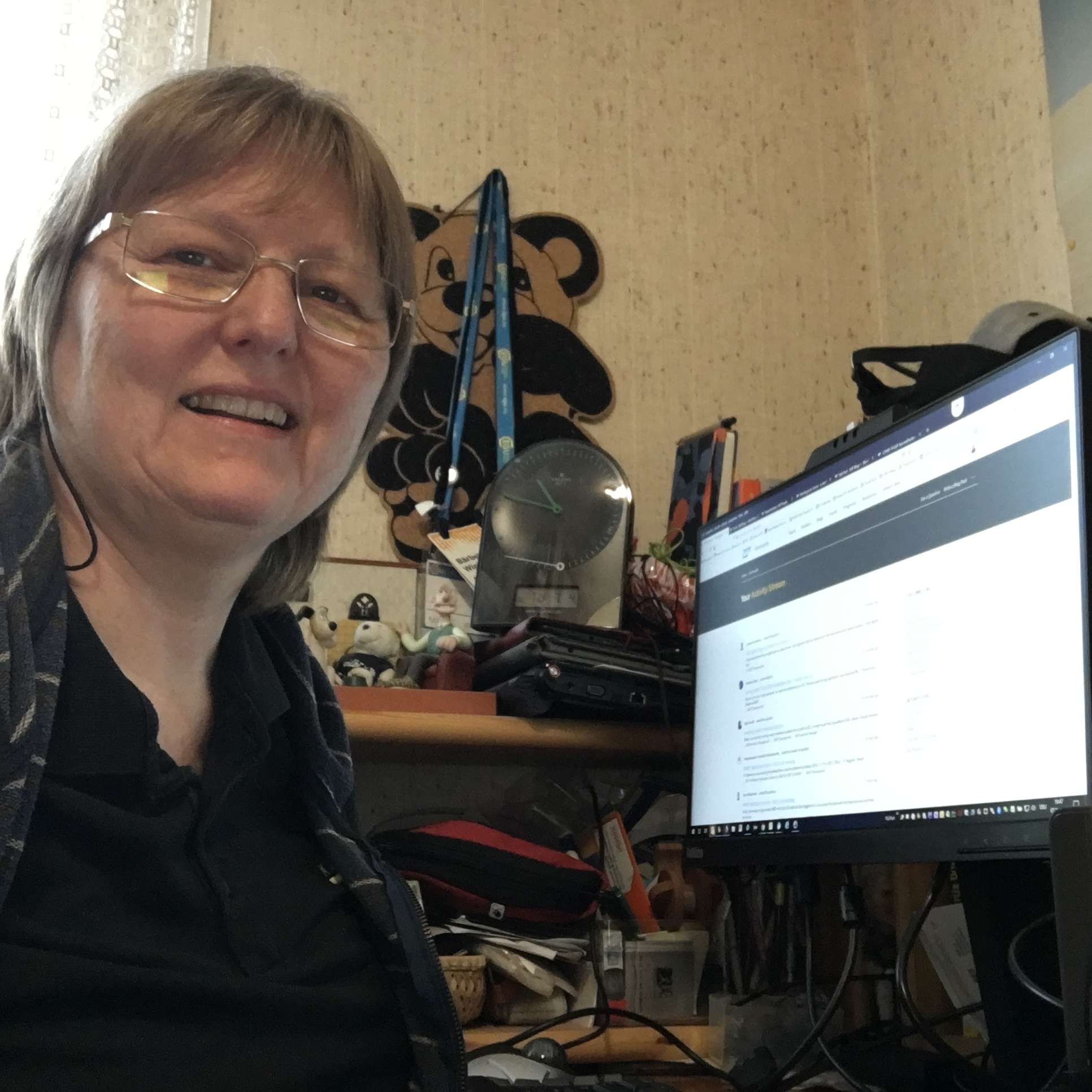 Picture taken by and showing the blog post’s author

When I had been working from home sporadically in the past, I mostly did it via my private laptop and a Citrix connection. This had the advantage that I had a larger 17″ screen but the disadvantage of sometimes having to cope with quite some time-lag when changing from one program to another – not to mention that I did then work from my living room which didn’t really offer a “physical” separation between work and leisure. Now, I obviously have two separate work spaces: one for office work and one for sparetime work which makes it easier to make a clear distinction. I try to keep to the same routines I do when going into the office: getting up early, starting the coffee machine, visiting the bathroom, doing my morning round online to check my personal emails and various messages, checking on climate-related news and what not.

As I now don’t have to catch a train, I can take it easy as the way from “home” to “office” is a mere 10 meters or so and therefore doesn’t take the usual 30 minutes! As I do in the office, I usually power up my work-laptop sometime between 7:00 and 7.30 am – now using a VPN-connection – to check for new emails and to then work on whatever needs my attention. Our team has a daily “sit down” meeting scheduled for 8:30 to chat over a cup of coffee or tea and to exchange the latest news, something which would happen in passing were we still in the office, so it’s a nice and neat way to stay in contact even if only virtually. Our team-lead uses this meeting to share company news if any.

Tools we use to stay in touch

We’ve had various Cisco-tools like Jabber and WebEx at our disposal for years and to begin with, we mostly used those to stay in touch. Jabber offers an easy-to-use chat feature linked to our office phone numbers, so starting a chat with others now working remotely, isn’t all that different to doing the same thing when we sit in the same building but several offices apart. As a lot more people than before were starting to work remotely across the globe all of a sudden, some of the tools did show some strains when heavily used. Many people were faced with various connection issues in the early days of getting set up. Due to a concerted effort from various support teams, more tools for working virtually and more bandwidth for VPN-connections were quickly – within just a few days! – made available.

So, in addition to using the already mentioned Cisco-tools we can now also utilize Google-chat and Google-meets and many virtual meetings have been switched to these new offerings.

Due to the nature of my work, I’m not all that much involved in large projects at the moment. Instead, I’m coordinating change requests to see who from our small team of internal ABAP-developers can work on which task – in many cases this just means to provide an effort estimation in some other cases, programming can actually be done if the request has been approved to be worked on. I’m also looking after our coding guidelines and providing input to other developers from around the globe if they for example run into issues related to our ATC-checks. This work isn’t really all that different when working from home compared to working from the office. Reason being that in most cases, the questions come from people working in other locations, so communication happens via email, chat or phone anyway.

Meetings we did face to face in the office to for example work on an effort estimation with colleagues from a process team we now simply do via WebEx or Google-meet which for me works just as well. These virtual meetings may even be a bit more focused, if properly prepared and if screensharing is used to good advantage.

Having been an avid user of SAP Community for quite some time, there isn’t really much of a difference for me now that I’m working from home. I still rely heavily on searching the community when faced with an issue we cannot quickly solve on our own. Calls like the monthly report live on April 2 provide additional means to stay in touch with the wider SAP Community and to learn a thing or two about working remotely. I also joined the first virtual Stammtisch Stuttgart in the evening of April 7 which had been scheduled by Martin Fischer. While there had been around 5 to 6 people when I had joined the Stammtisch previously in Stuttgart, about 13 people joined the virtual version. With a few people joining from Bavaria and Austria, participants “came” from much farther afield than the greater Stuttgart area, something not really all that surprising, given how easy it is by now to join such events. Not to mention that people are most likely pretty keen to socialize (almost) any way they can in times of social distancing! Another advantage of a virtual Stammtisch is, that it’s possible to easily share short presentations to start discussions about interesting topics, something which Martin did with some slides about DevOps.He also tweeted about the event.

Another planned event to look forward to is SAP Online Track on May 30 & 31 which was first announced even before the pandemic forced many on the ground events to be cancelled or switched to virtual meetings. So, timing for this one is ideal – especially as by then many people will be “old hands” in connecting virtually who may have had reservations just a few short weeks ago!

These are my current musings on working from home and as I get more into it I may add updates to the post now and then. Also look out for more blog posts from SAP Champions sharing their experiences with #WorkingFromHome like Florian Henninger (here) and Michelle Crapo (here) already did by the time my contribution was published.

Cheers from one home office to many others and above all: stay safe and healthy!

I have a question.  Now that you are all set up to work at home, are you going to take advantage of it more often?  Were there any benefits to you?

It's great that it is just business as usual for you.  It is for me too.  But I must say, I do miss getting out a little.  I haven't seen my Mom in person for a long time.  My sister and I just bought here a google portal.  So I'll have some more face to face time.  She lives fairly close to me.  But I've had a cold lately.  It just seems like I can't get over it.  So I'm at home a lot more than usual.

Thank you for sharing your work habits!

Frankly, I don't think that working from home will become a regular habit for me. The working conditions in my actual instead of this make-do office are a lot better. So what I currently have, gets the job done, but I'm already looking forward to returning to my desk and to see my colleagues again in real life instead of only virtually.

It's really nice to get to know you better and finally, I also managed to read your #BIF post https://blogs.sap.com/2020/01/10/blog-it-forward-barbel-winkler/

I admire your "need a solution - found a solution - conduct the solution" in regards to the technical tools you needed. And it seems that you adapted your "working from home" very well, too, so well done 🙂

And I like your daily “sit down” meeting within the team because it's a great chance to keep in contact and to share also stories beyond work.

Thank you also for your feedback on the virtual SAP Stammtisch and everyone, who like to add your thought on #SAPStammtisch virtually, can use this thread: https://answers.sap.com/articles/13017731/sap-stammtisch-goes-virtual.html

Thanks for your feedback, Svea!