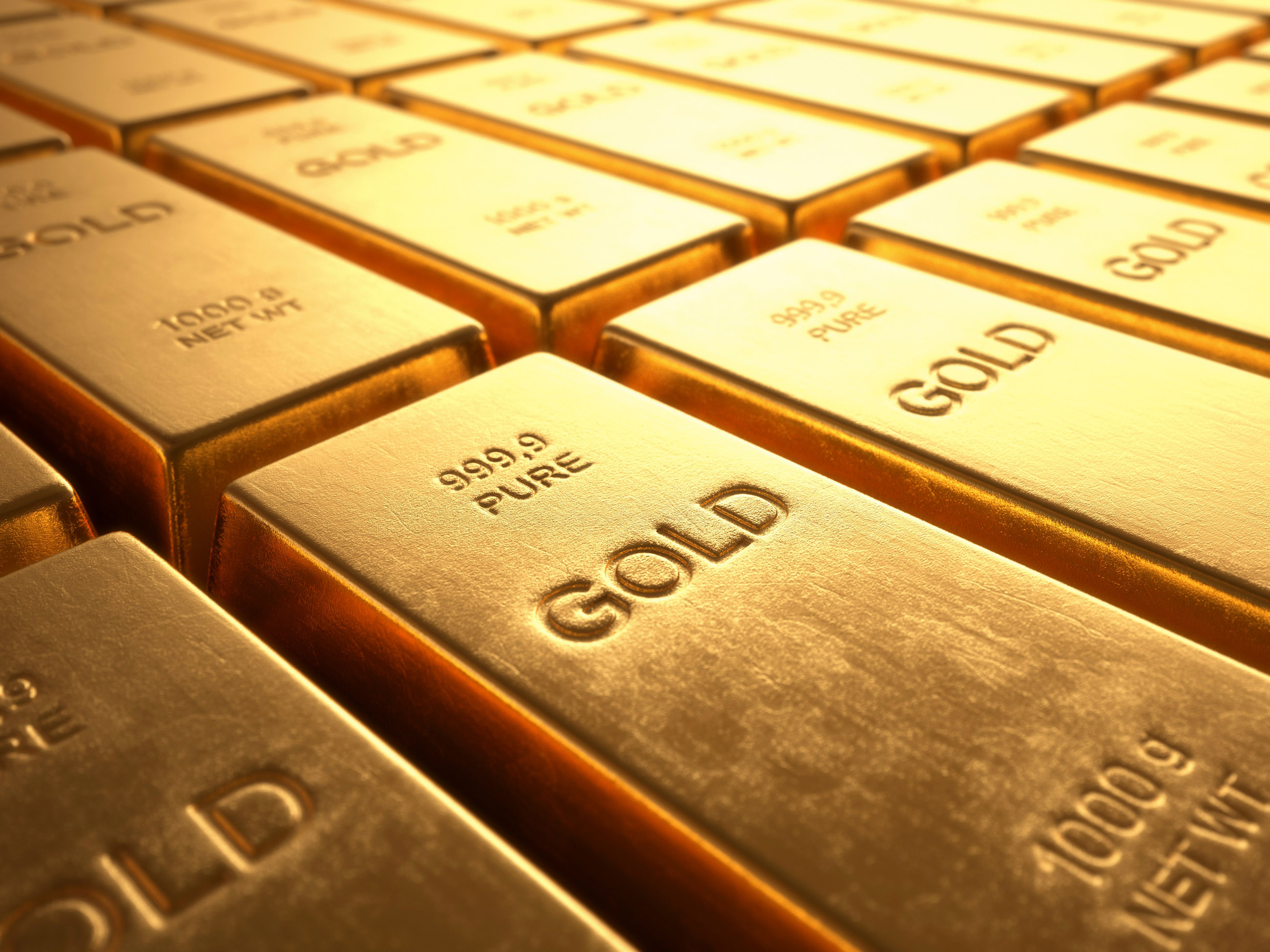 When business discovered big data it was welcomed as the new (black) gold.

Alas, after five years of drilling and prospecting not everyone remained as enthusiastic.

Looking at web searches with Google Trends, we can see that the interest in big data took off in 2012 but now has waned a bit, taken over by data science and machine learning by 2018. Who’s to blame? Cloud computing. 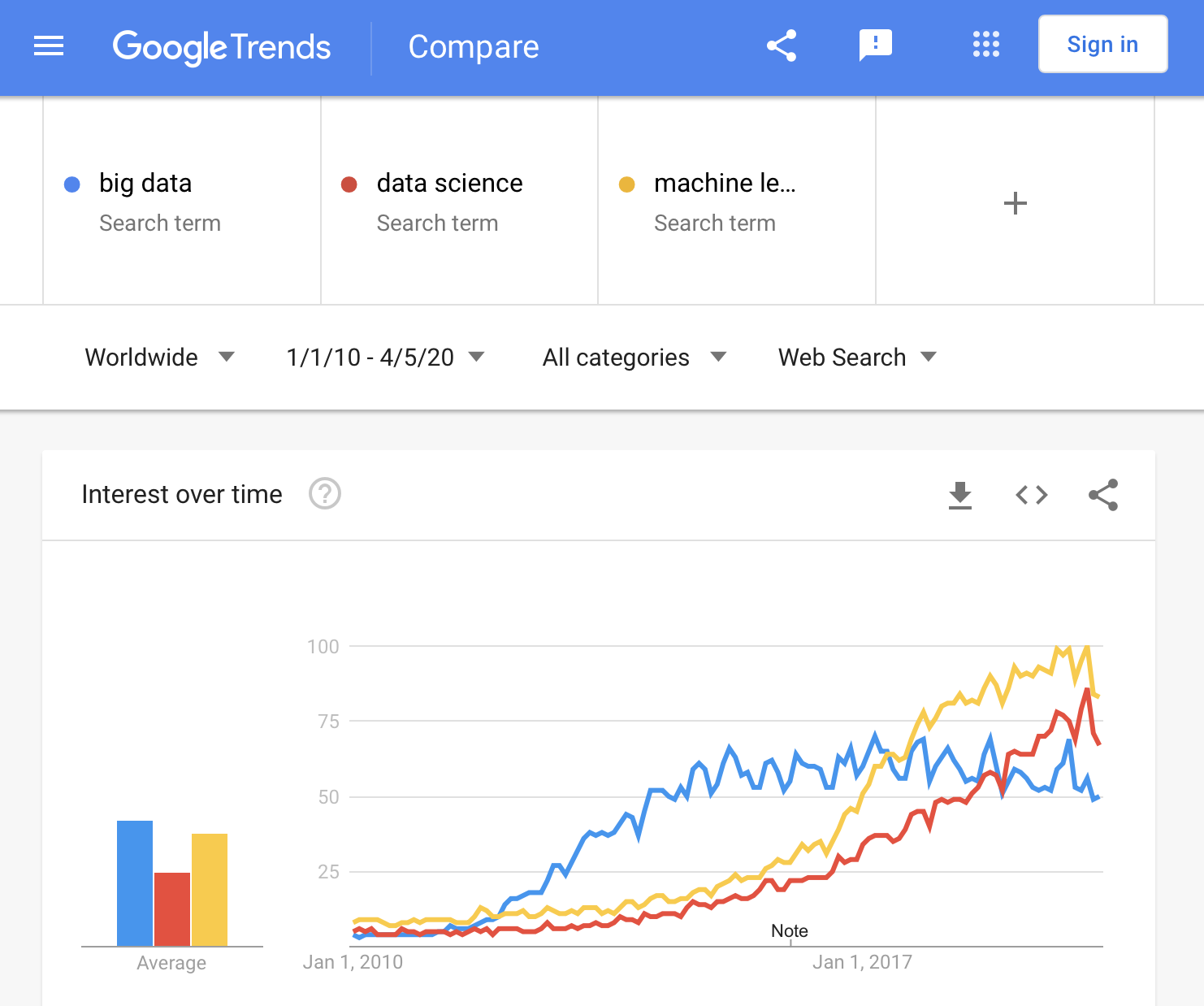 The Vs Everyone Must Know

According to The Origins of ‘Big Data’: An Etymological Detective Story the term goes back to the 1990s but from a technical perspective, big data took shape between 2004 and 2008 when the contemporary search giants Google and Yahoo developed and later open-sourced MapReduce and the Hadoop Distributed File System (HDFS). Pig, Hive, Zookeeper, and other Apache open source projects followed (the current count is 49).

Big data was initially characterised with 3 V’s: volume, velocity, variety, to which IBM added veracity, The Four V’s of Big Data, then we had the 5 Vs Everyone Must Know,  The evolution of big data – the ‘6 Vs’, the Seven V’s of Big Data, the 10 Vs of Big Data and SAP even went up-to-eleven by adding the V of Vora (more on that V below). 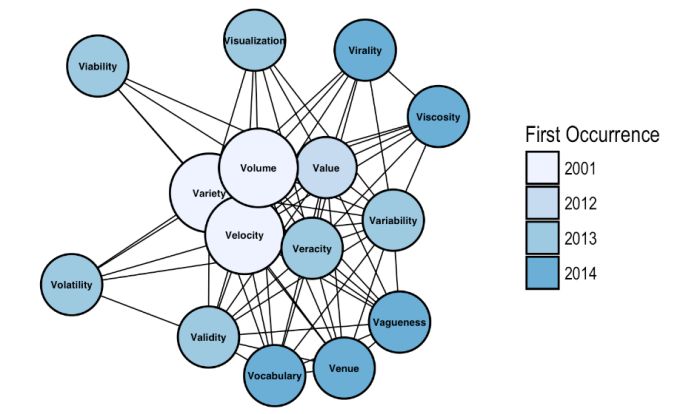 Should you want to learn more, the Big data entry on Wikipedia provides as good an introduction as any (including a shady picture of the SAP Big Data bus). Alternatively, visit

With the Sybase acquisition of 2010, SAP got hold of several big data-related technologies like IQ and Event Stream Processor (ESP) for IoT (Internet-of-Things) ingestion.

In 2012, SAP bundled SAP HANA with several of these technologies as the Real-time Data Platform (RTDP).

A year later, in 2013, SAP acquired KXEN, the Knowledge eXtraction Engine, which just had brought InfiniteInsight to market for self-service predictive analytics, bringing data mining to the business professional, no PhD required. SAP InfiniteInsight would morph into SAP Predictive Analytics with the Automated Predictive Library (APL) providing SAP HANA integration. Although we would now file this under Analytics, at the time data mining was the way to go to unlock big data.

For more information about data mining and advanced analytics, see 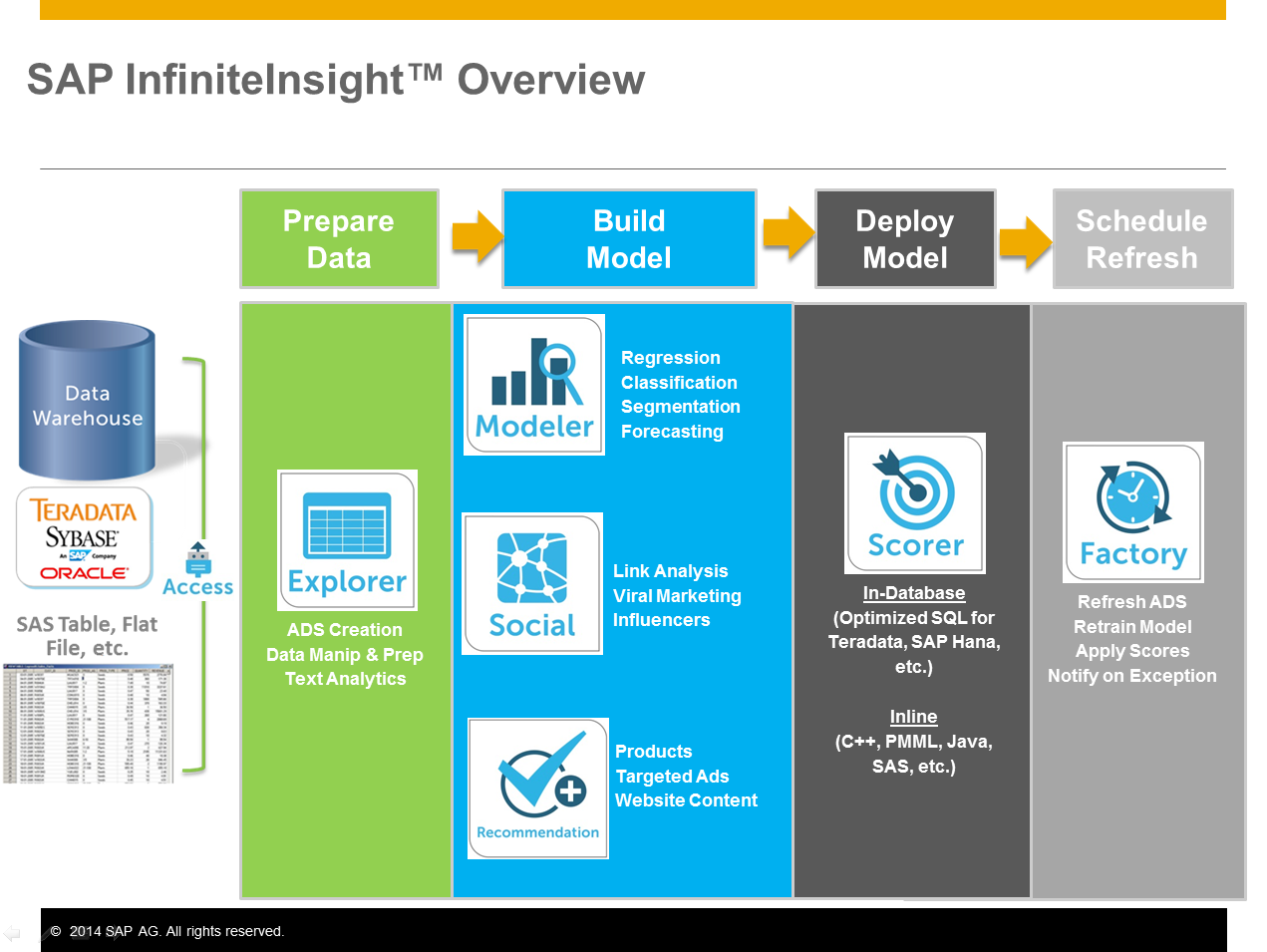 The same year, with the release of SAP HANA SPS 06, smart data access added virtualisation to the SAP HANA platform, which enabled direct access to Hadoop and other data sources from SAP HANA.

Also in 2013, SAP partnered with HortonWorks (now Cloudera) to resell big data platforms and started the Big Data Tour to get the developer community on the bus.

The next year, 2014, Spark integration was added plus a certified Spark distribution, causing some question marks about the future direction of SAP (HANA). 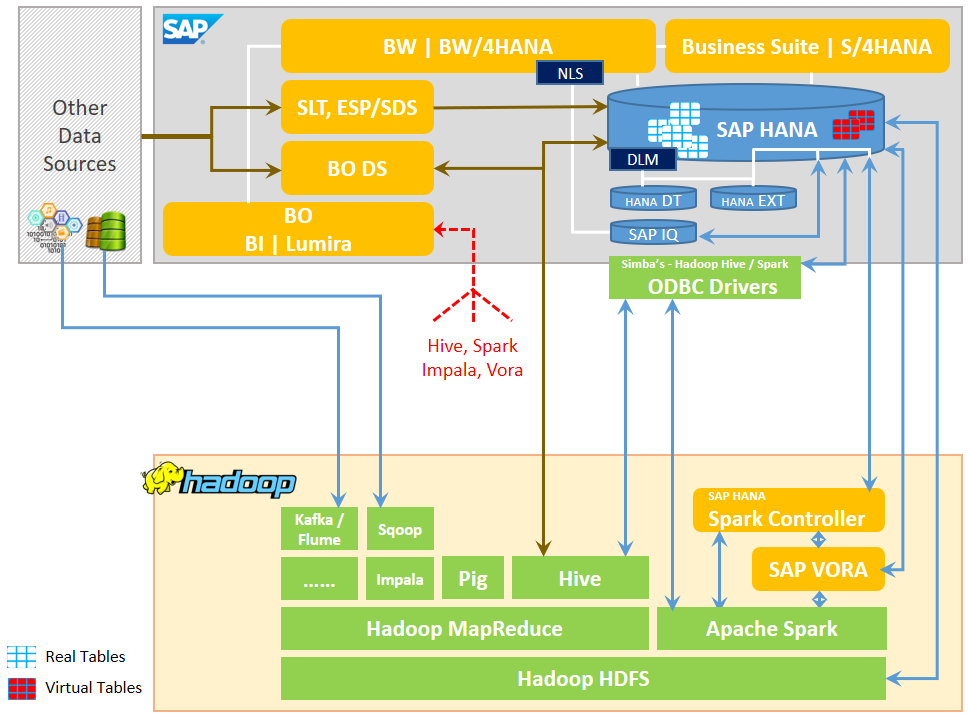 The name was later shortened to SAP Vora to underline that this concerned an independent product which not required the SAP HANA platform (see the FAQ for your questions).

In 2019, again at SAPPHIRE NOW, SAP refocussed on the business and announced the Business Technology Platform (BTP) as successor: the fastest way to turn data into business value (yes, that’s one of the big data V’s).

For version 2.0, SAP Vora was re-architected to run inside Docker containers with Kubernetes for cluster management, providing customers “the flexibility to choose among cloud, on-premise and hybrid deployment models, and they can migrate between these options easily and with minimal disruption”.

Illustration from What is SAP HANA Cold Data Tiering? by Ruediger Karl

In 2019, SAP Data Hub was made available as a managed service with the name SAP Data Intelligence and just recently (March 2020), the on-premise product and the cloud-based service have been merged.

A Single Gateway to All Your Data 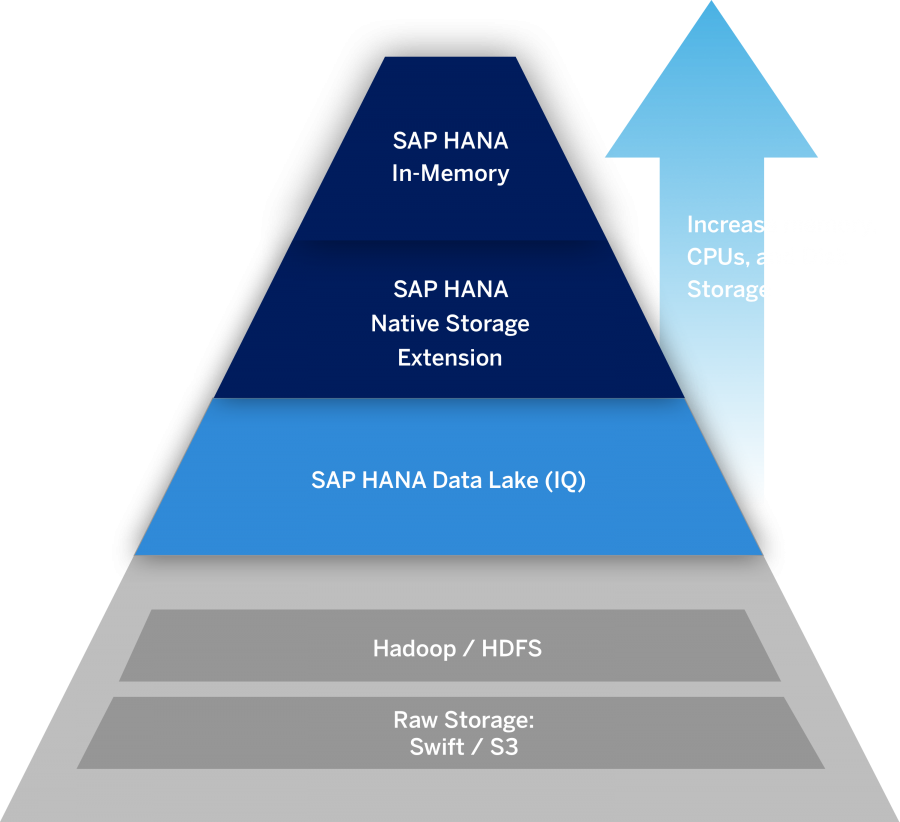 Smart data access (virtualisation) plays an important role in the design of SAP HANA Cloud and this includes, of course, access to the usual big data source suspects Hadoop and Spark but also to Google Big Query and Amazon Athena. 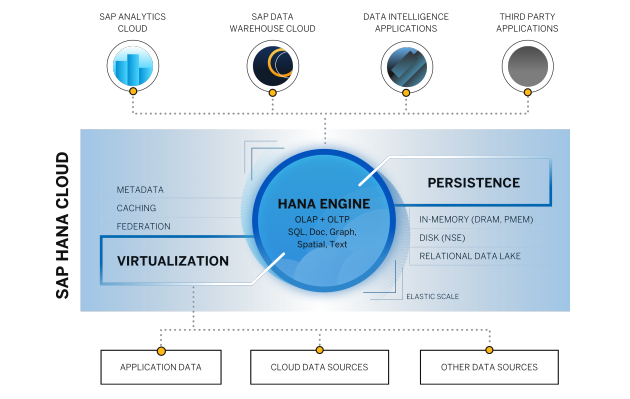 Amazing one for the jumpstart, thanks very much.