I am still reading Gisela Schmalz’ book ‘Mein Fremder Wille’, roughly meaning ‘My Extrinsic Master’. In her book she describes how people delegate their own thinking and doing to platforms, apps and algorithms, which are developed and controlled by a few players from the US west coast and from China, and she lists some philosophies by which major social media players have been influenced: Rationalism, Utilitarianism and even Transhumanism. It gives me some comfort that at SAP we still control part of our platform. But since we don’t own all of our communication tools, we should watch carefully how they are impacting our thinking.

The German philosopher Immanuel Kant lived a very strict and disciplined life. The story goes that neighbours would set their clocks by his daily walks. One day his friend was late for an appointment. When Kant met him on the pathway a few minutes later, he passed by without taking notice. Quite a sociopathic behaviour for a person who claims that the supreme principle of morality is a standard of rationality! My personal point of view is closer to Scottish philosopher David Hume who held that passions rather than reason govern human behaviour.

I noticed that Social Distancing affects my emotions. Over the week-end I thought about what I am missing. I don’t miss the gossip, the twittering and chattering. All of this I am getting from my newspapers and the digital channels ad nauseam. What I do miss though is the being together with others. Don’t get me wrong, I’m living together with my beloved ones and I can count myself lucky that I don’t belong to a high-risk group. Some people might be able to substitute digital experience for human closeness. I am not. A smile, a blink of an eye, a cute little dimple when someone laughs… a moment when the narrator tastes a madeleine dipped in tea… these perfect moments are deemed to be sources of involuntary memory, capable of bringing us back to the original event. Technically one could say that social distancing reduced my random and fuzzy access to sensory inputs, including taste, scent, touch, eye contact, body movement. Such signals will usually be processed by my fast thinking brain. I’m reflecting on them right now because their actual lack might be one of the reasons why my life feels unreal.

All of a sudden my memory should be deprived of these sources? Not knowing for how long I will have to organize my social life in the grid I feel a bit like a character in Samuel Beckett’s play Waiting for Godot.

From morning until late I watch the joggers trotting along the trails in the park in front of my window. How comes their new sports frenzy? Is it because it’s beginning of spring, or could it I be that people are feeling like Rilke’s panther behind the bars? I don’t know because I didn’t ask them. What I know for sure is that my early morning walks give me a form of comfort that I don’t get through digital media. Fresh air, clean water, the warmth of the sun and the chill of rain on my face – for free! I want to go out to participate in life. 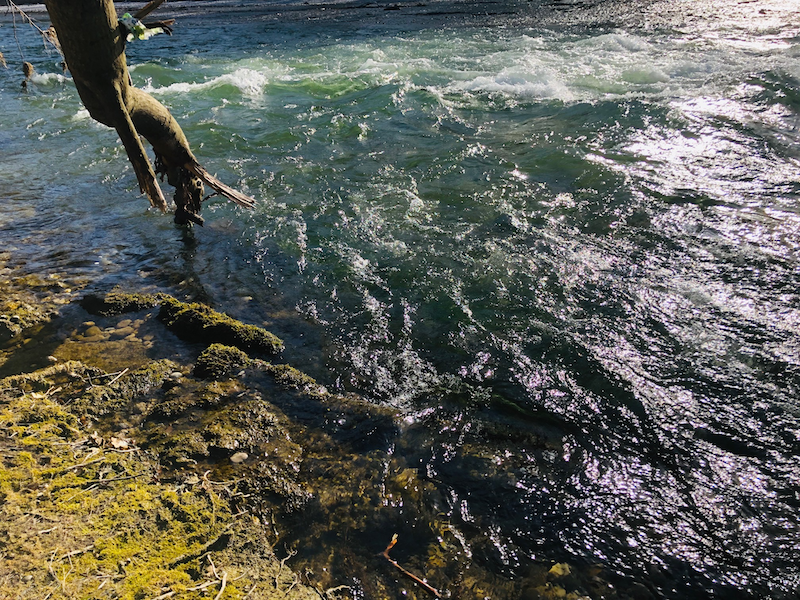 Perhaps it’s not even the knowledge that it could be forbidden by authorities any time why so many people meet in parks and squares. Many of them are usually hidden in offices like me. They may have discovered that hugging a tree and watching the river reconnects them to a life they have lost long time ago. I found a very good explanation in an article by Stanford psychologist Jamil Zaki: “during difficult times people feel the urge to commiserate, to comfort and be comforted by each other”. The dilemma we are facing right now is that physical distance between people is needed to flatten the curve. At the same time, to fight loneliness and isolation people need social closeness. Instead of social distancing, we should practice “distant socialising”, is also the conclusion of the article.

I don’t know why, but the picture of inhabitants sitting together in front of a TV in an old people’s home crosses my mind. Remember the incredible scene when Jack Nicolson emulates the broadcast of a basketball final in One Flew Over the Cuckoo’s Nest? As a medium TV could obviously enable a form of “distant socialising”. The joint experience of watching and commenting an event connects people. By the way – Instagram just launched Co-Watching of posts during video chats to let people joke and talk about content instead of just consuming it solo. With Slack, Zoom, Mural or MS Teams we have our digital communication tools at hand at SAP.

We might just have to learn how to use them for creating our own social experiences. Lennart Keil’s summary on Working from Home Patterns proves well that vitual sessions can be very productive. And it raises a new question: how might a humane workplace look like in a post-pandemic world?