The profile data analyzer is inspired by Brendan Gregg’s FlameGraphs. It provides additional graphic and interactive views comparing to SAT/SE30/ST12 to make the performance analysis easy, for example, in the following scenarios.

In the following parts of this blog post, we will demonstrate how to use the profile data analyzer to understand both the performance bottleneck and the program logic for optimization.

“The real problem is that programmers have spent far too much time worrying about efficiency in the wrong places and at the wrong times; premature optimization is the root of all evil (or at least most of it) in programming.”
–   Donald Knuth, “Computer Programming as an Art (1974)

To start the analysis, we only need 2 prerequisites

Now we could drag and drop the collected ABAP trace into the profile data analyzer and click the “Analysis Report” button to show the report and flame graph.

Looking at the above flame graph for the short SM21 trace, the following methods are highlighted in purple by searching with “MAIN|RSLG_DISPLAY|GET_INSTANCE_BY_FILTER”

In the above graph, we could find that

Another interesting part in this example is that, there are some “Not shown methods” on top of “RSLG_DISPLAY” and “CALL_SCREEN”. They are some SYSTEM programs that are filtered. The filter rule is the same as the default SAT setting. We could show these filtered methods by checking the “Show technical details” option.

Check the “Show technical details” option and click the “Analysis Report” button again, we will get the following un-filtered graph. In this graph, we could find that

Look at the above graph, it is also not so clear about the exact difference with the short SM21 trace. To improve it, we developed the diff function. We could compare the two SM21 traces with the following steps.

Here is the flame graph in the diff report, and the tips to read this diff graph. 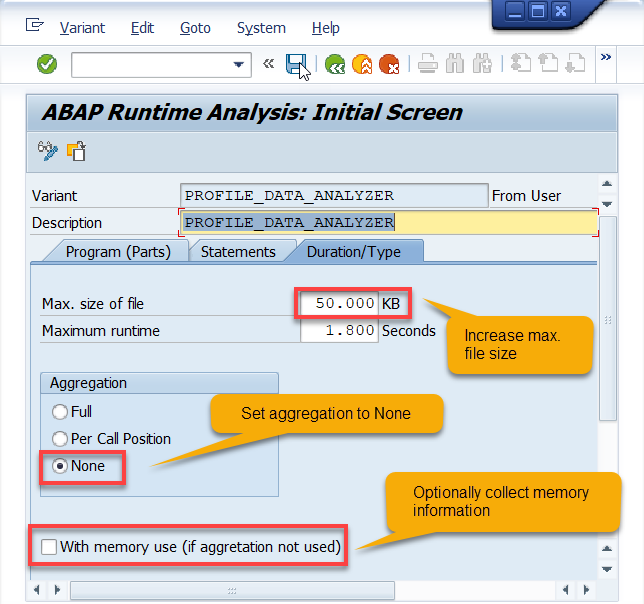 Here is an example of the allocation stack flame by tracing SM21, including the normal view and diff view. The allocation flame graph follows the same analysis rules as the performance flame graph. 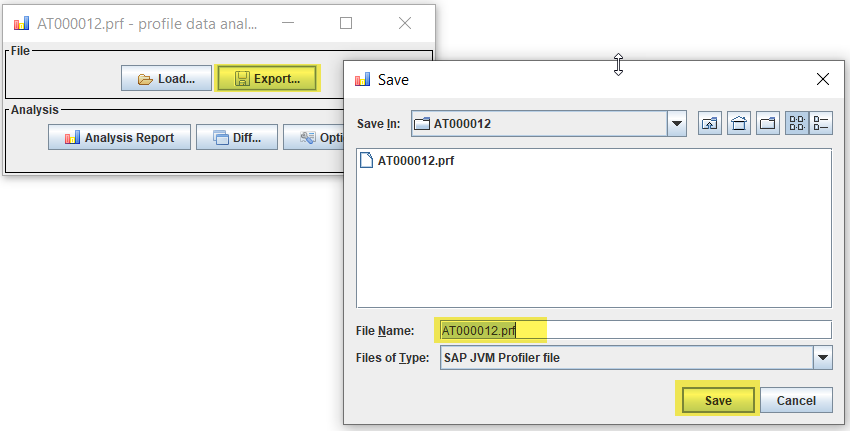 The detailed information and analysis steps could be found in the following documents.

Here we only list some screenshots to show the general idea about analyzing the converted ABAP trace in SAP JVM Profiler. 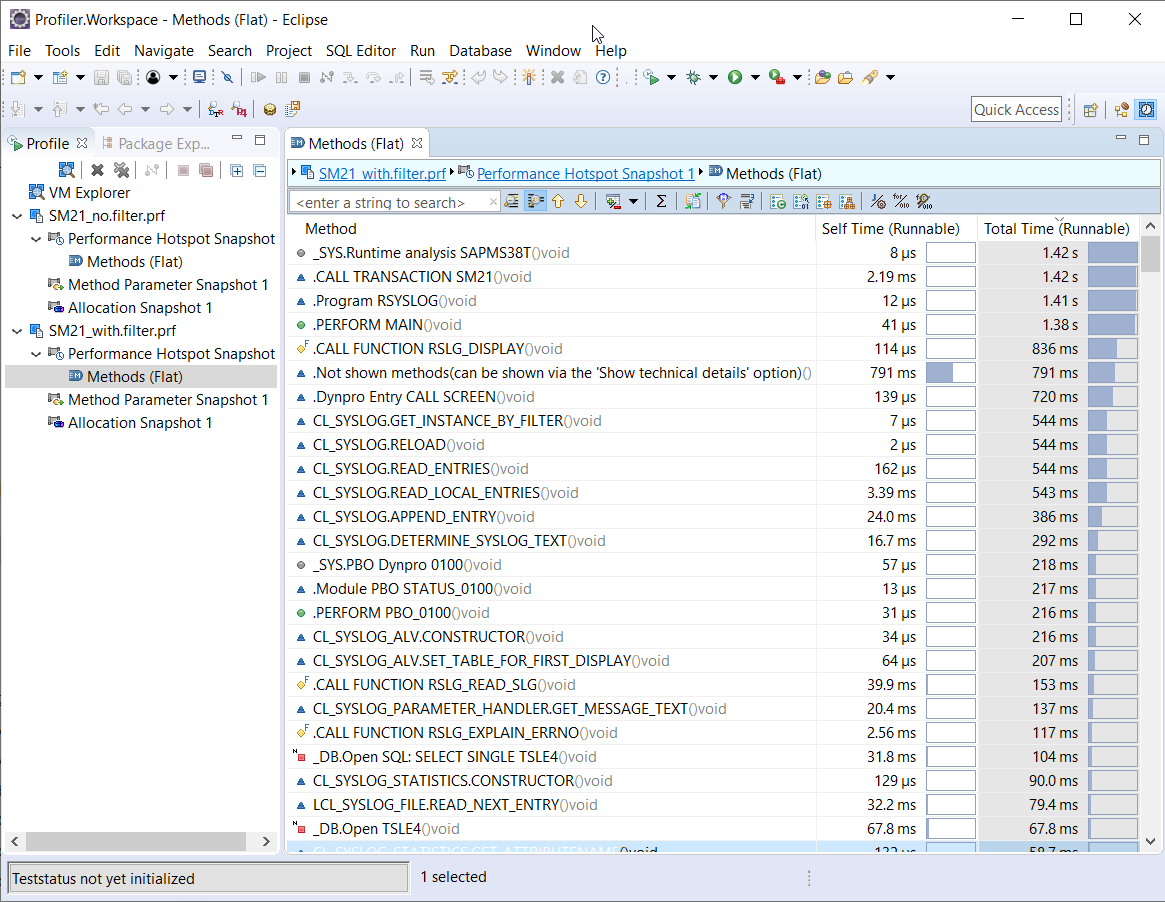 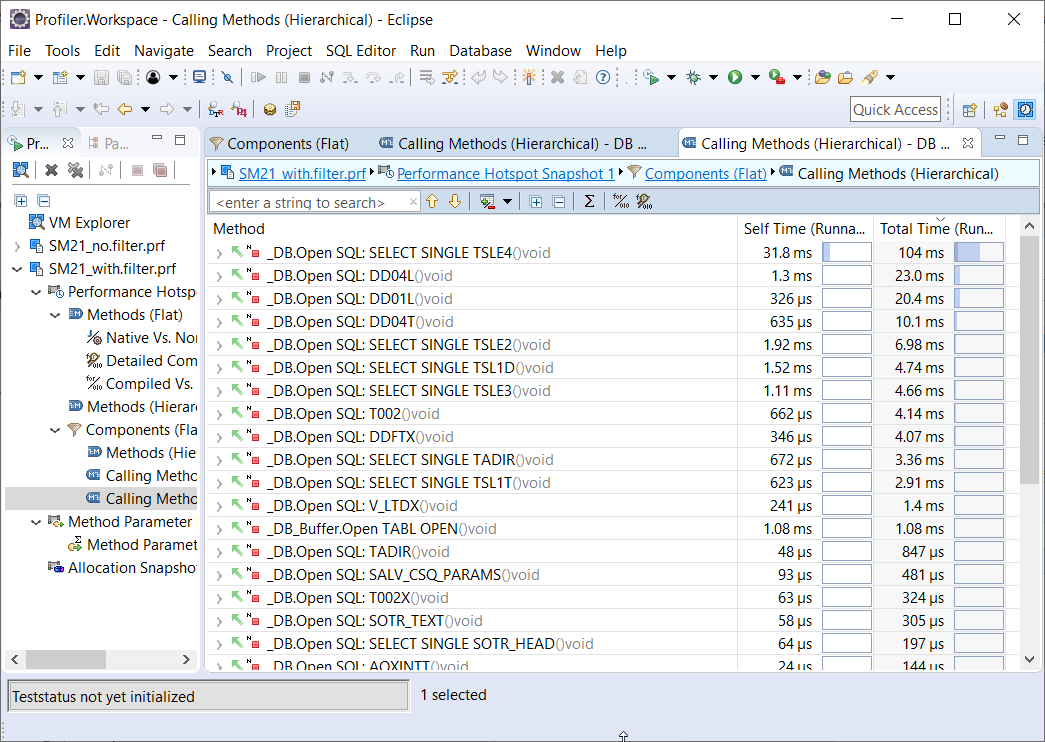 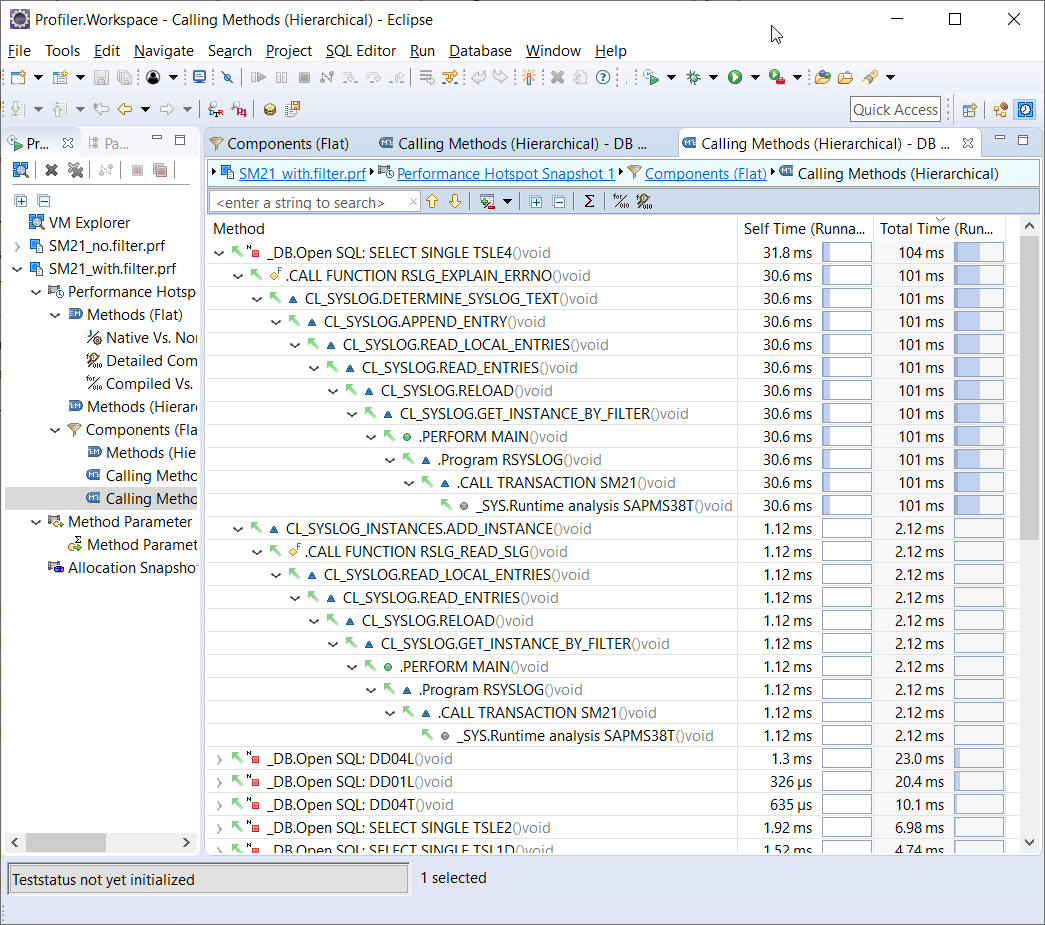 I'm trying out the tool with a SE30 trace file:

When I load it in the tool, he shows progress updates like 'read abap records ' etc

But then a popup with error is shown:

The subtle difference in filename .prf makes me assume he makes a local .prf file based on the abap trace file, but it is unclear to me why he can't find it anymore afterwards. Perhaps Security settings on my laptop?

Can you help? Or should I create a message?

Hi Wouter, thank you very much for your interest and for sharing the first comment!
How about the current status? Is this issue solved?

About this issue, yes you are right. This tool will make a local temp .prf file based on the ABAP trace file. This temp file will also be removed when the profile data analyzer is closed. So I am also thinking it may be related to some security settings.

If the issue is still there, I would like to check some detailed information.
Would you mind send me an email to “qiansheng.wang AT sap.com”.
You can always reach me via email, and I think the email will be easy for you.

Hi Wouter, I hope everything is working well now. Because I did not get an email from you, I guess this issue is already solved. Please feel free to send me an email if there is any other issue at any time. You are welcome, and your feedback is always important and appreciated.

Thanks, and regards,
Qiansheng Wang

Performance  check gives me better idea to understand. Thank you Mr. Wang. Do you need particular tool in the cockpit to check or execute the tcode: SM21.

Then there certain code: CN30/ CJ30. ME21N, gATP, FB50, etc,. will have a highier impact? How to do all at one time so when run the batch job can sequence so the system process availability and the order of the operation can be sequenced. Postings etc will take time and external file update.

For ABAP, the trace can be collected or scheduled via SE30, SAT or ABAP in Eclipse. For background jobs, I’m not sure how long your job will be, but the trace size will be big in the “no aggregation” option. So, I would like to suggest trying the “aggregated by Call Stack” option as documented in KBA 2881237 at the very beginning, and/or starting from small data volume to make the job short and understand the possible trace size. This KBA will also guide you to other online help pages or other resources about this topic. I hope it is helpful.

Hope this information is helpful. : )

Thanks, and regards,
Qiansheng Wang

Hello Qiansheng, Thanks for the response. I It helps.

there are some “Not shown methods” on top

I see no "not shown methods" in my traces. Why? As I got it this stub is showed with disabled tech details in settings, and with enabled they should unfold into real method names. And I see neither of two

Hi Pavel, thank you very much for trying the profile data analyzer!

Yes, You are right. The option "Show Technical Details" will unfold the filtered records. For short, the default behavior is the same with T-Code SAT that the SYSTEM methods and "Memory/Runtime Management" methods will not be shown.

Take the SM21 traces in this blog as examples, most of the hidden SYSTEM methods are responsible for the communication to SAPGUI, which might not be so interesting when we want to improve the ABAP program's performance itself.

Together with ProfileDataAnalyzer.jar, there is a PDF document "Profile_Data_Analyzer.pdf" in the SCN download package. More detailed information and screenshots could be found by searching "Show Technical Details" in this PDF file or in this blog post.

To be honest, I think this option should work, and at this moment, I did not think of some reasons which could make it fail. After we change the option "Show Technical Details", we only need to click the "Analysis Report" button again. Would you mind send me more information if you still have the problem, for example, your ABAP trace and screenshots? I would like to check the details.

Here is my email “qiansheng.wang AT sap.com”.

BTW, the idea of "Show Technical Details" it to make the default behavior similar and consistent with existing tools, and do not give end users surprise, especially when end users are working together with the existing tools.

Another comment for your scenario. Only certain methods are filtered (such as the communication with SAPGUI as shown in the SM21 example in this blog. The rule is the same with SAT default).

In case your program is not executing these kinds of methods, then there is no difference in the resulting flame graph (independent of whether you've selected "Show Technical Details").

Do you know about call timeline in the Eclipse tools?

It's representativeness is somewhat the same as Flame Graphs so mainly overlaps with the functionality of your tool.

Thank you very much for trying profile data analyzer and for raising this discussion to me! This is a very interesting topic, and I would like to highlight two main differences. : )

For the second point, I would like to quote the following comment from Brendan Gregg(the author of the Flame Graph), which explains the difference between time-ordered visualization and flame graph visualization.

However, faster and changing code paths may be rendered as thin icicles, without enough horizontal space to draw the function names. Understanding this profile requires the user to zoom. This can be both time consuming, and the user can lose notion of the big picture.

For these cases, by switching the x-axis sort order from time-based to alphabetical for the stack (origin to leaf, which in the icicle plot is top-down), all thin icicles of the same code path are merged. This allows a quick visual appreciation for where time is spent, at the sacrifice of time-ordered patterns. The alphabetical sort is called a “flame graph” (http://www.slideshare.net/brendangregg/blazing-performance-with-flame-graphs/35).

I am trying the tool with a measurement file from SAT, downloaded to my local pc. But when I try to import the file, I get this error message: 'Trace.xml is not a valid profile file'.

But this trace file was generated normally by SAT, no aggregation. What could be the cause?

Hi Tony,  thank you very much for your interest and the feedback.

To solve it, there are 2 ways to get the original binary ABAP trace file.

BTW, the following documents might also be interesting for some other resources or tips.

At last, hope this issue will be solved, and you will enjoy the profile data analyzer. Please feel free to send me an email to “qiansheng.wang AT sap.com” in case of any other feedback or I am not able to reply here in time.

Thanks and best regards,
Qiansheng Wang

I'm trying out the tool with a SE30 trace file.

When I load it in the tool, it shows error:

Hi Jianfeng, thank you very much for your interest and the feedback.

Currently, I think there might be two possible reasons.

I hope the above 2 directions could solve this issue. Just in case not, it might be fast to send me some screenshots or the example ABAP trace (if it is OK for you) to my email “qiansheng.wang AT sap.com”.

At last, here are another 2 comments which might be interesting for you.

Thanks and best regards,
Qiansheng Wang