The question of who I am has been discussed by philosophers, psychologists, neurologists and many other scholars. My personal view on the topic is grounded on some experiences I made, and influenced by my passion of reading. As I am constantly learning new things and forgetting others, my interpretation of who I am is quite unstable.

This week my life was very different. I was under quarantine and except for my wife and son didn’t meet anybody in physical space. In order to recharge my body’s Vitamin D supplies I spent some time in the sun every day. I practiced yoga and prepared some good lunches to care of my health. I spent all my working hours sitting in front of my readymade desk in the sleeping room, plugged into digital space via wireless headphones, microphones, screens, keyboards, touch pads, cameras and other sensors I might not have noticed, because they are already part of my self, like my hands and feet. Wired like a Cyberpunk I am part of an organisation capable of operating without physical offices, which I find a big relief in my current situation.

Taking the view of Mind–body dualism one might claim that our organisation acts like a collective mind, and facilities, canteens, airports, planes, trains, shops, parks… represent the collective body in quarantine. My mind will probably change when my body spends too much time in isolation. The same could happen to our collective mind if we have to stay at home for too long. The risk about spending too much time in the grid is that you forget about your physical existence. At least that’s what’s happening to Nerds on a regular basis while they are in their Flow. And that’s what a young computer hacker in The Matrix found out about his true nature.

I am not a robot, I am human. According to my MacBook I am the root in an operating system named Darwin. This week I had a virtual meeting with members of my Working Out Loud (WOL) circle. In the Guide for Week 6 John Stepper suggests that updating my internet profile could help to deepen my relationships. I am not sure if this would work for me, but I would like to give it a try. According to LinkedIn I am a person who can help you to master digital transformation. If you have read thus far you might send me your feedback about who you think I am.

I don’t consider myself a Nerd, but I noticed that when I think of a conversation with a colleague I am not differentiating anymore if it took place in physical or digital space. Perhaps it’s already too late for me to choose between the red pill and blue pill, because part of me can’t exist without being digital. I also noticed that I am kind of addicted to LinkedIn – sometimes I check the app several times a day to see what’s going on in my social bubble.

Nondualism refers to a higher state of consciousness where the dichotomy of I-other is “transcended”. Ralf Hütter from the German band Kraftwerk claims that it is a contradiction in itself to separate between man and machine. When you play an instrument or ride a bike you become a unit – man machine. We need not choose, we are part of the computer and the computer is part of us. Perhaps we are living in a nondualistic world already, and the question if my mind manifests itself in physical or in the digital space doesn’t matter. What matters to me though is to help the world run better and improve people’s lives. Problems of people are real. Perhaps my world still felt unreal this week, because all of a sudden I was forced to face some inconvenient facts.

Working for SAP we are in charge of platforms and technology. Now let’s use our collective mind to solve real problems – for our customers and for real people. Or as Désha Nujsongsinn, an independent designer nicely summarised on a sticker I spotted on a lamppost in Munich: Less BLABLA. MORE BAM. 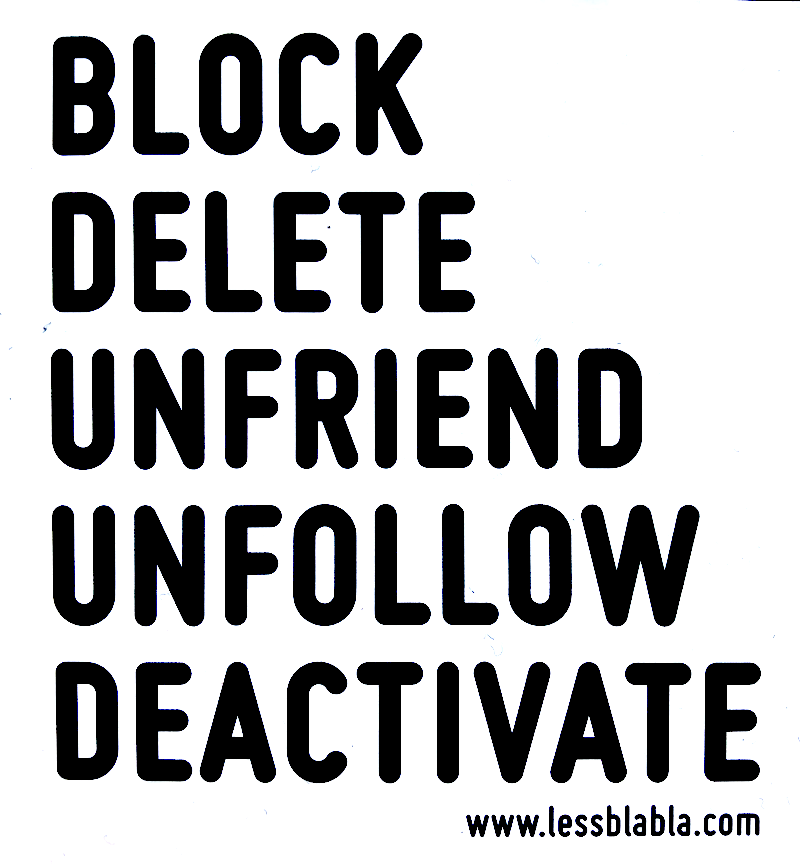