If you’ve been following previous parts of this Understand Containers series, then you should have these two containers on your computer myjupyter01 and myorientdb01.

To get something meaningful we need some data in the OrientDB database and a Python client in the Jupyter environment to connect to that database.

We need an OrientDB driver for Python installed in my Jupyter container from https://github.com/orientechnologies/pyorient.

[At the time of writing this post the proper version of the driver is not available at PyPI, therefore we need to install it from the source with
pip install git+https://github.com/orientechnologies/pyorient]

Ok, the driver has been installed in the Jupyter container.

We need some data, and — because it is Friday afternoon here already — what can be the better data to look at, if not at OpenBeer dataset?

If you haven’t played with it yet by following some of the tutorials or just by importing it as one of the sample databases in OrientDB Studio, then I prepared this one-liner to import it into the DB server running on orientdb01 container. (It was on macOS, and might not work the same way on Windows host)

This command is certainly overengineered 🙂 as the same can be done in a less confusing way. But I did want to play with it a bit, and that’s the result. Some notes:

…you should see this database in the OrientDB Studio. 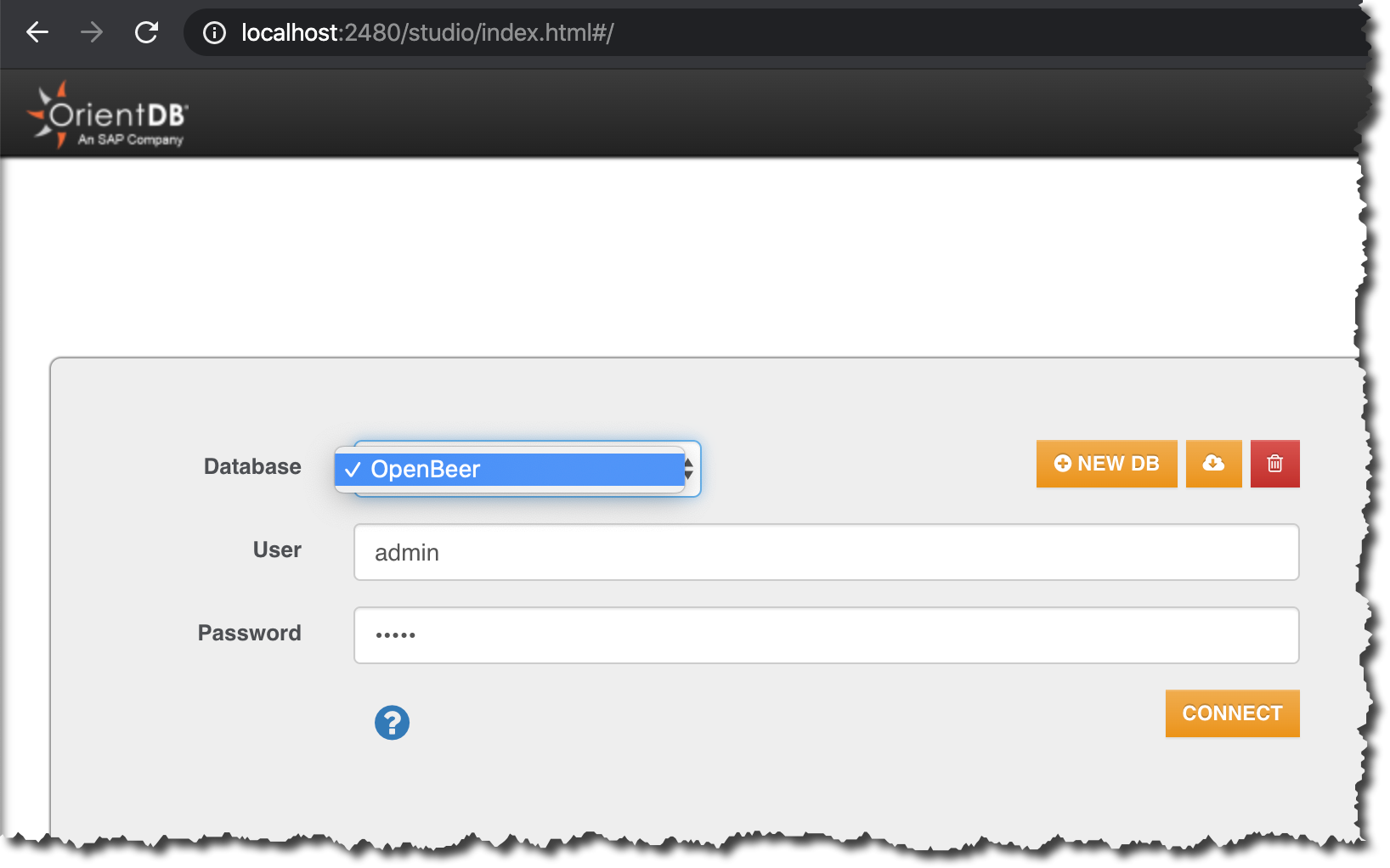 admin / admin are default user and password for this sample db.

Once logged you should be able to run a query like below. This one is to find from the graph what the categories of beers brewed in the United States are (at the time the dataset was created ;-)) ordered by a number of beers linked to each category. 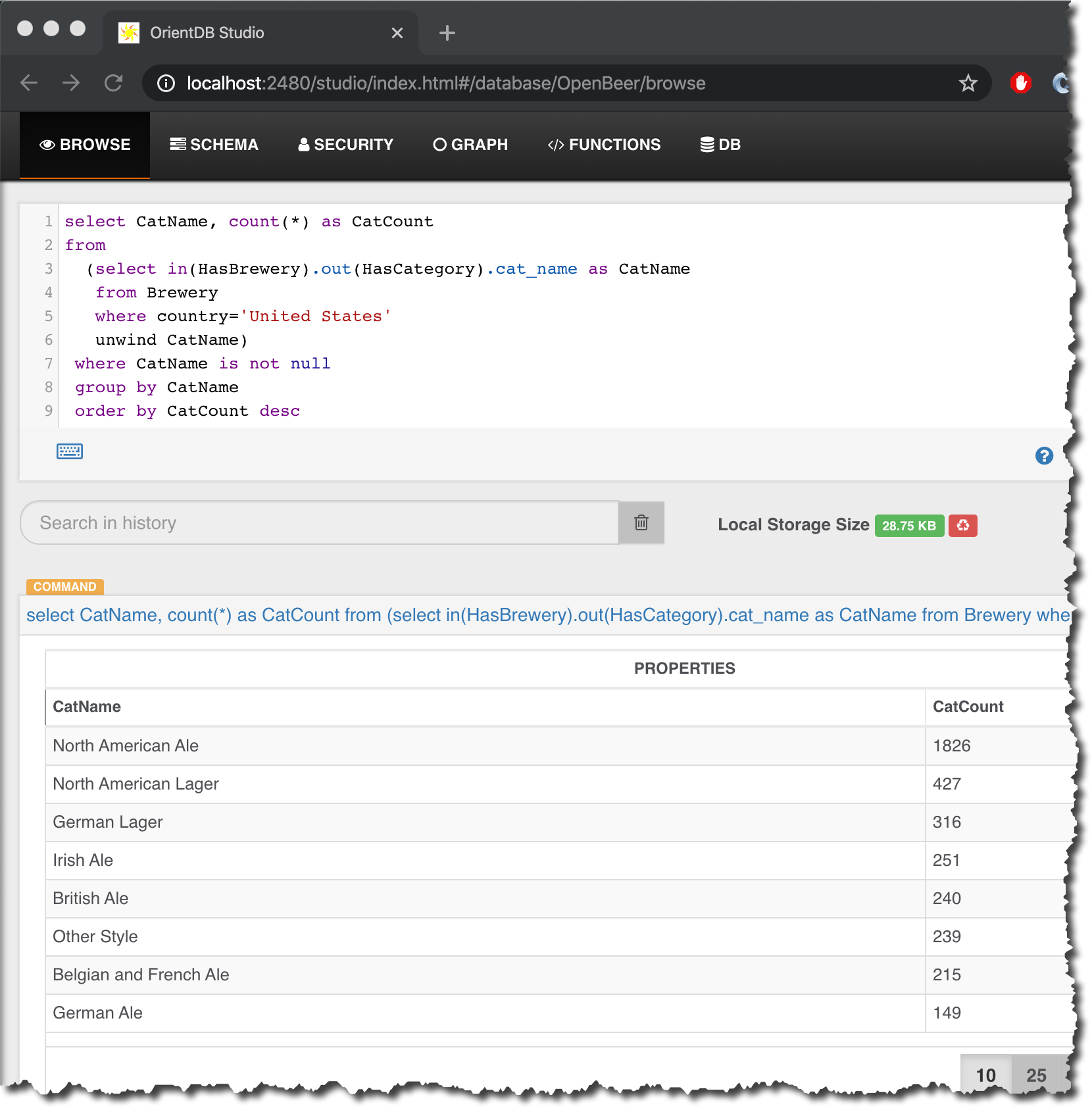 That was just the preparation for what we really want to practice today: two containers (or rather applications inside of them) talking to each other. 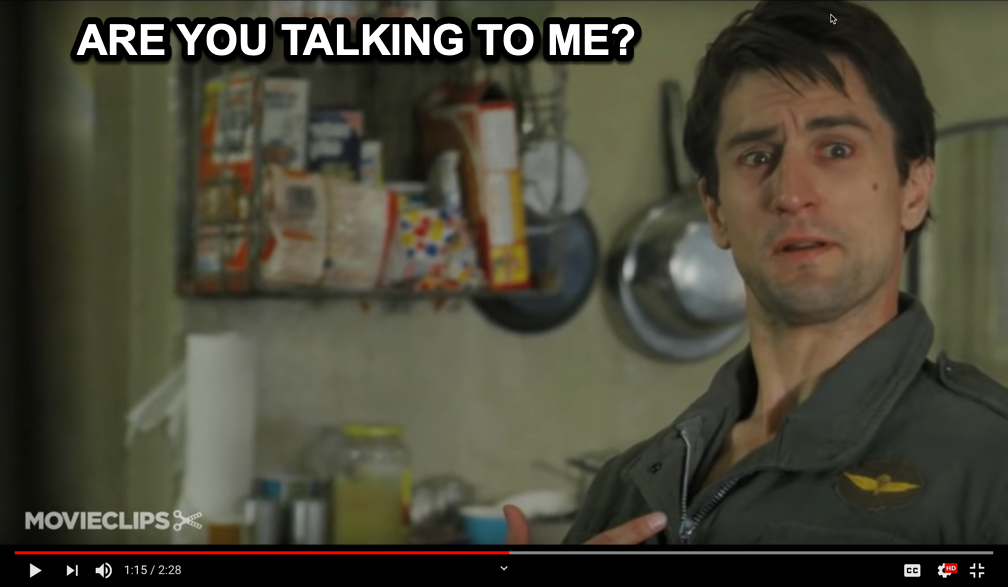 Containers talking to each other…

Basically, we want to get a result of the same query above, but in Jupyter (running in one container) connecting to the OrientDB (running in another container).

Docker has a few networks preconfigured as can be seen using docker network ls.

Each container by default is assigned to the Docker network bridge and gets an IP address in that network. We can find these IP addresses by scrolling through the output of the docker network inspect bridge. Or we can use the --format option to output only what we need using a Go template.

I dunno about you, but it is the first time for me using Go templates. It took me a while to get this syntax working in the command below. I’ll be grateful if you can share some improvements in comments!

So, in my environment, the IP addresses are:

Let’s open a new notebook OrientDB_OpenBeersDB in the Jupyter and try!

We imported pyorient and then used it to open OpenBeer db with the driver’s client. This client connected to server on 172.0.0.2 port 2424. This port is used by OrientDB for clients that support Network Binary Protocol, like pyorient.

Please note that we use the port from inside the container, not the one to which it might be mapped on the host running Docker!

Next, we just run a query and output its result.

It is not a good practice to communicate using IP addresses, because it might change. To solve this and to switch to hostnames we should use Docker’s user-defined networks.

Let’s create our own mynet01 network…

…and connect our two containers to this network.

What is cool, is that in the user-defined network container names are as well hostnames! Using example 3 from Understanding containers (part 03): one-shot containers we can use ping to check how it is working.

Let’s try from the Jupyter notebook now changing the IP address with the hostname. 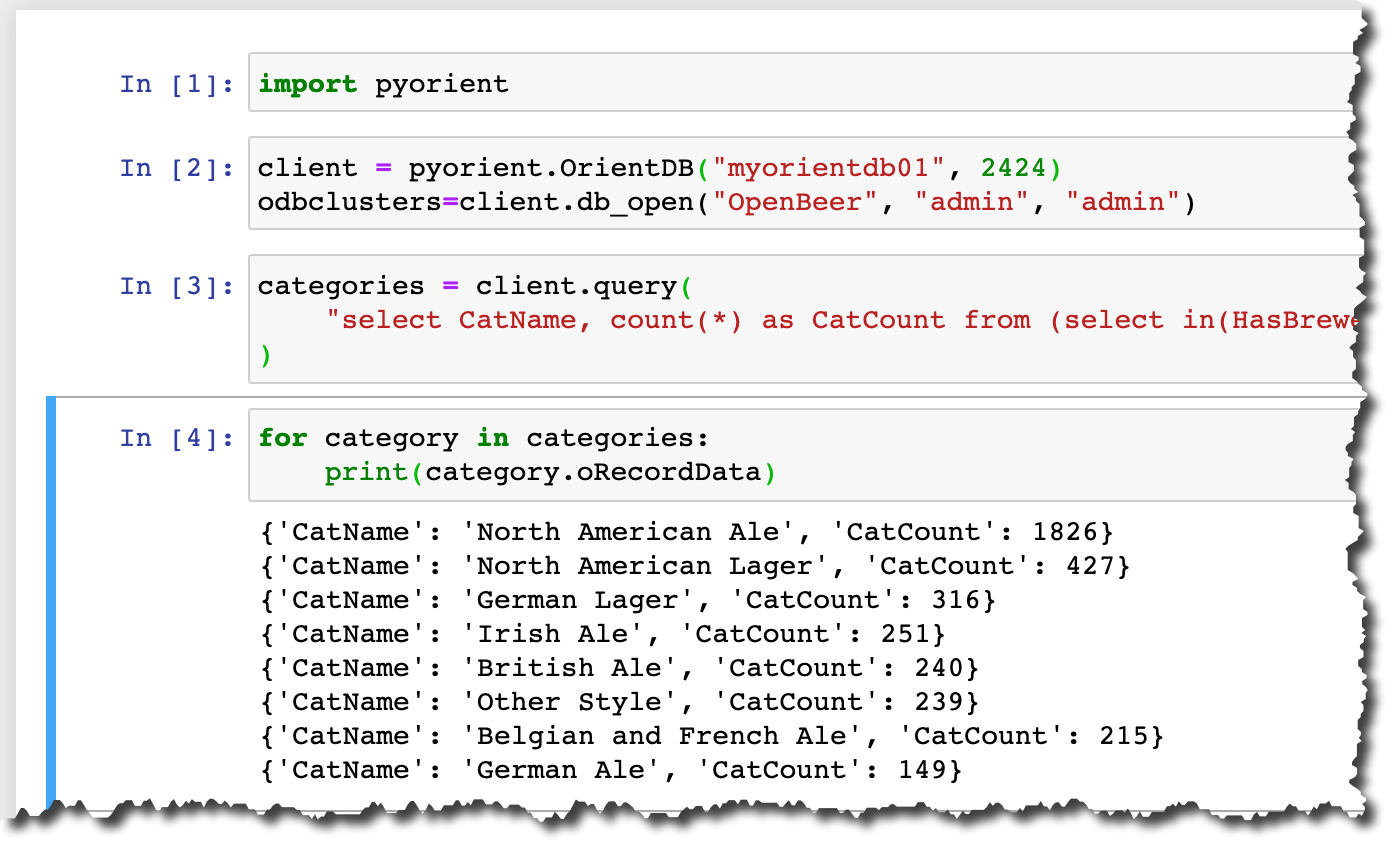 But using the container name as a hostname might still not be the best solution, in case we got another container with another name running our OrientDB server and serving data.

In that case, it is better to connect a container to a user-defined network using an alias. So, let’s disconnect and reconnect our container myorientdb01 to mynet01 network using --alias…

…and update the code in the Jupyter notebook. 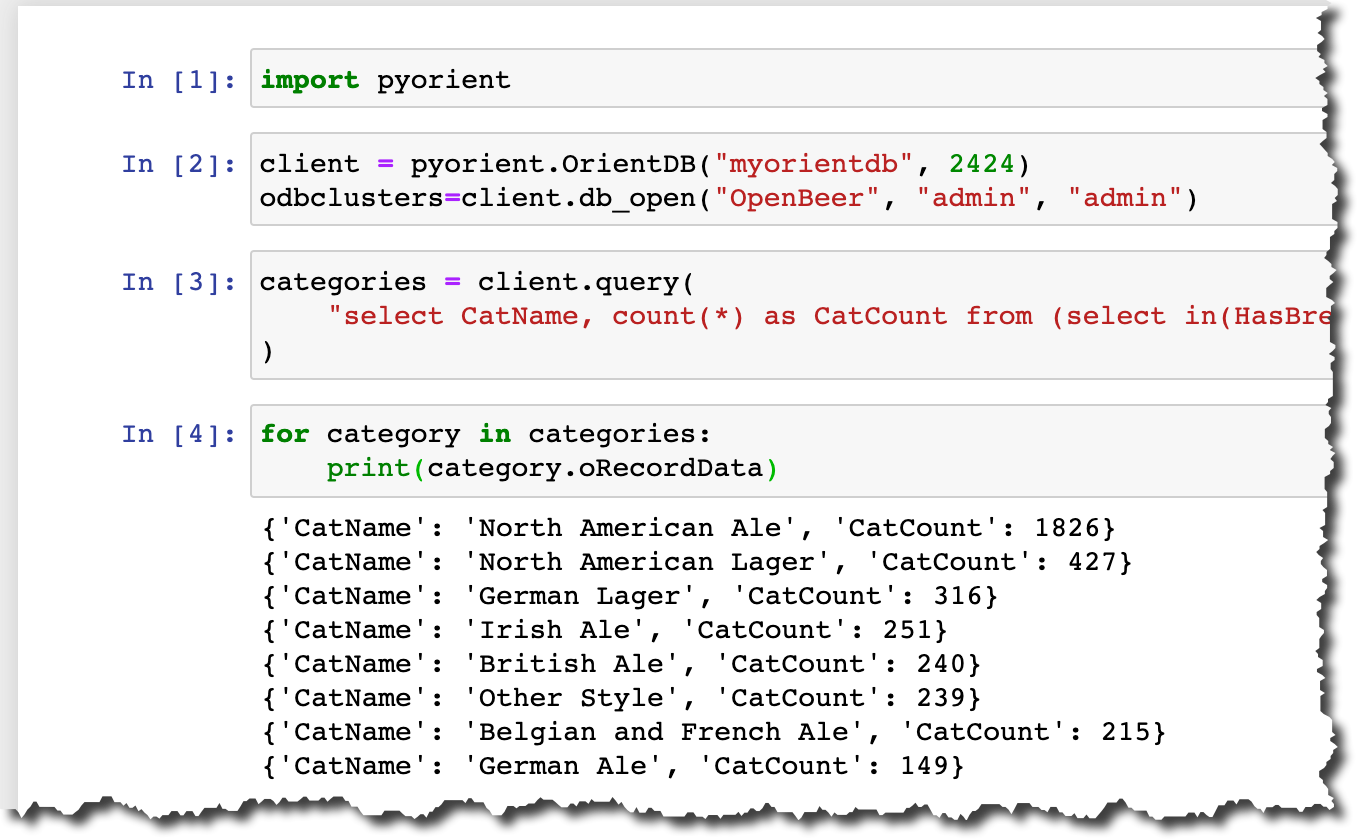 We used quite a few new concepts today: not just Docker’s networks, but executing multiple commands in the container using sh -c "...&&..." and using Go templates to format the command output too.

Just like you, I am thirsty for more. But it is Friday evening, so let me quench my other thirst with … another beer. Repeating after Ray Bradbury “Beer’s intellectual…”

Another excellent tutorial/experiment/application/learning about networking containers!

After successfully completing it, I put a few notes, comments and questions together below.

Thanks for this series of container blogs, Vitaliy! Your scenarios are very useful and insightful for those of us learning to apply these new technologies. Sincere thanks for your creative application of this tech to help us learn the fundamentals! Beer is always a good catalyst...