In the post below, I am taking opportunity to share the understanding gained working as SAC Roles and Access Control Consultant. The post gives an overview of the key components and new dimension terminologies used in SAP Analytics Cloud and relevant for access set up. Along with it I have also shown the tie up of how the access controls work together as a combination of SAC Roles and Folder permissions. So lets have a quick start!!!

SAP Cloud Analytics (SAC) is one of the latest enterprise cloud solution provided by SAP for planning and predictive analysis. One of the key aspect of SAC authorization management is the control of folder access for individual user or team (group of users) through permissions defined under SAC roles and under SAC folders. The folders allow access to contents like dashboards and stories.

Security Role Concepts: Roles within SAP Analytics Cloud define permissions for user types and these can be based on the product features that each user type can access. SAP delivers following standard roles with the product:

BI Content Viewer: This is standard SAP role meant for read only privileges.

BI Admin: This is standard SAP role which hosts all permissions available in the system and is a super user role.

System Owner: Only one technical user in the system can be mapped to the System Owner role at a time.

One can have custom roles based on the access segregation requirements. For example we can have User Admin and Role Admin roles as derivates of BI Admin by restricting permissions against User and Role.

Folder Permission Concepts:  The second principle, considered here, while concluding the access design approach for SAC is that users can access SAC folders through assignments based on Teams or as an individual. The Team based folders access strategy involves less administrative efforts but again is more inclined based on the requirements of the customer. The snapshot of possible folder access controls from system is as below: 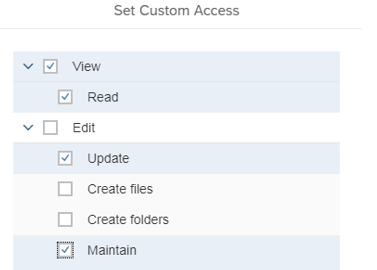 In the pictorial representation below, we have tried to show a possible example for the combination of permissions floating in to users and allowing access to the content within a SAC folder.

Here in the example below, the roles are assigned to teams and not to users directly. Based on the user mapping to a team, user gets access to roles and underlying folder permissions.

As stated earlier, both SAC Roles and Folder Permissions commission together to establish controlled access environment.

SAC also allows access provision workflow under it’s Self Service feature. One can define the roles and owner/manager workflow for access update. Once the workflow is complete the access of an individual is updated in the system.

The stories or dashboards through information as an output based on the data controls at the SAC Level or the corresponding backend S4 or BW system.

One of the possible scenario is that the SAC Application controls allow access to content like dashboard and stories whereas the data controls are maintained at the backend system which can be S4 or BW system.

This brings my first blog to the point of conclusion which can be summarized as Users, Teams Roles and Folder Permissions tie up together for a well controlled SAC Environment. While designing the SAC Security the single tenant or multi tenant environment makes impact on the change control of these components like as we mentioned that there is no transport mechanism possible for roles in a single tenant infrastructure.

In the next blog we shall take quick reference of the Mass User Creation in SAC. Hope the reading was helpful to understand the key security/access components of SAC. Thanks for your time and share your valuable comments or queries. More than happy to answer!!!

Please refer help.sap.com for reference content in this regards.

Thank you for your KT.

in other way,can i restrict user access on SAC by assigning the user  roles in the backed Netweaver system?

SAC and BW roles are independent, therefore the assigned roles in BW will not have an effect on the Role in SAC. However the access a user has to BW data is of course still valid in SAC.

The "Connection" will then of course be the usr starting from SAC and query the BW.

it would be interesting for me also to know…

Is it possible to maintain the security at page level? Like some users can see a page in a story while some should not. Is this feasible?.

Hi Sayed, this is not possible. Sharing settings are on Story level.

Thank you for the very informative blog, have you written your mass user access Blog we are very interested in that.

Is it possible to restrict based on field level. In BW, using Analysis Authorization, we can can restrict some key figures in the report level. How to achieve this in SAP SAC.