As part of the SAP S/4HANA Regional Implementation Group, I have the privilege of working with a lot of customers who are implementing SAP S/4HANA locally, regionally, and internationally.

Now that SAP S/4HANA has been available for over 3 years, we are more often finding customers who are upgrading their version, sometimes as part of their initial project, sometimes as a next phase.

Are you already live or doing a project with SAP S/4HANA and SAP Fiori apps in your company? Maybe you wonder how to implement this on your system?

In September 2019, SAP released SAP Fiori 3 for SAP S/4HANA, providing UX harmonization across SAP Solutions and brought also on SAP S/4HANA a new Quartz theme and some new features.  SAP S/4HANA 1909 comes with SAP Fiori 3 by default but you can also upgrade other SAP S/4HANA releases to get it.

Next to technical improvements like the new Quartz theme, new launchpad functionalities, improved performance, every SAP S/4HANA release (1610, 1709, 1809, 1909, .. ) comes with many new apps, while existing apps are updated and get new functionalities (eg. more export to spreadsheet opportunities).

Upgrading SAP Fiori on your SAP S/4HANA system will bring your end-users:

In this blog post you can find out how to approach upgrading your SAP Fiori in an SAP S/4HANA context.

We can identify 3 different ways/options to upgrade:

Keep reading to find out the differences!

Upgrade Scenario 1: Upgrade your SAP S/4HANA release – this is the preferred option!

With this upgrade you will update the following components in your SAP S/4HANA landscape:

NOTE: FES upgrade is in most of the cases mandatory when upgrading your SAP S/4HANA system and FES 6.0 is currently recommended to be used for all releases.  All supported combinations are described in SAP Note 2217489 – Maintenance and Update Strategy for SAP UI (SAPUI5) in SAP Fiori Front-End Server.  Latest release is FES 6.0 SP1 and available for most S/4HANA releases (not for 1511), see SAP Fiori Front-end Server 6.0 – Extended maintenance and upgrade recommendations blog.  Some more info also in the later on in this blog.

Who’s doing this?  An Australian automotive customer recently upgraded from SAP S/4HANA 1610 to SAP S/4HANA 1909.  Recent upgrades for SAP S/4HANA include USA customers moving from 1610 to 1809 – in the manufacturing/retail, and insurance.

How can you do this? In the following blog the steps to upgrade from S/4HANA 1610FPS1 to 1809FPS0 are described.

You can find in the SAP Fiori apps reference library which apps are available in every release.   For example: Filter by Product Version using your SAP Fiori for SAP S/4HANA version and FPS release: 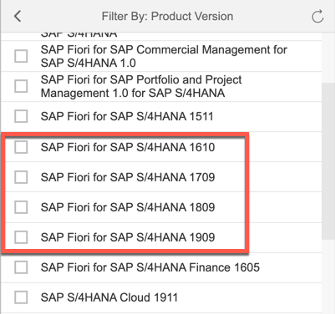 Currently as at March 2020 you will find the below numbers showing there is an increasing apps for every S/4HANA release:

In the Finding the Delta of New Apps between SAP S/4HANA Versions blog we describe how to find the delta between versions.

In the SAP S/4HANA What’s New Viewer you can also find an overview of the new, changed and deleted features and functions in the most recent SAP S/4HANA releases:

IMPORTANT:  What is the difference between FPS and SPS in the context of SAP Fiori on SAP S/4HANA?

From the SAP Release and Maintenance Strategy document:

A SPS upgrade e.g. SAP S/4HANA 1809 FPS2 to SPS3, issues with some SAP Fiori apps are solved, no new functionality is introduced

NOTE: FES stands for SAP Fiori Frontend Server, however this does not mean you need a separate server.  Actually, the FES components are recommended to be deployed embedded on the SAP S/4HANA system.  More info in the SAP Fiori Deployment Options and Recommendations blog

UPDATE 16/4/2021: some apps that are tightly coupled with the UIBAS component can break with a FES and a different version of S/4HANA backend.  Please take a look into SAP Note 2436567 – UI for Basis Applications for the apps that are known to have issues.

You get a new looking SAP Fiori launchpad (FLP) including:

SAP FES 6.0 is the long-term maintenance version and the recommended go-to-version for SAP Fiori front-end server upgrades for SAP Business Suite and SAP S/4HANA customers both for embedded and hub deployments.   When upgrading to FES 6.0 SP1 your SAPUI5 release is on long-term maintenance (until 2025) version 1.71.  More details in the  SAP Fiori Front-end Server 6.0 – Extended maintenance and upgrade recommendations blog

How to do such an upgrade?  In the SAP Maintenance Planner tool, select “Install or Maintain an Add-On”, choose SAP FIORI FRONT-END SERVER 6.0 – SP01. 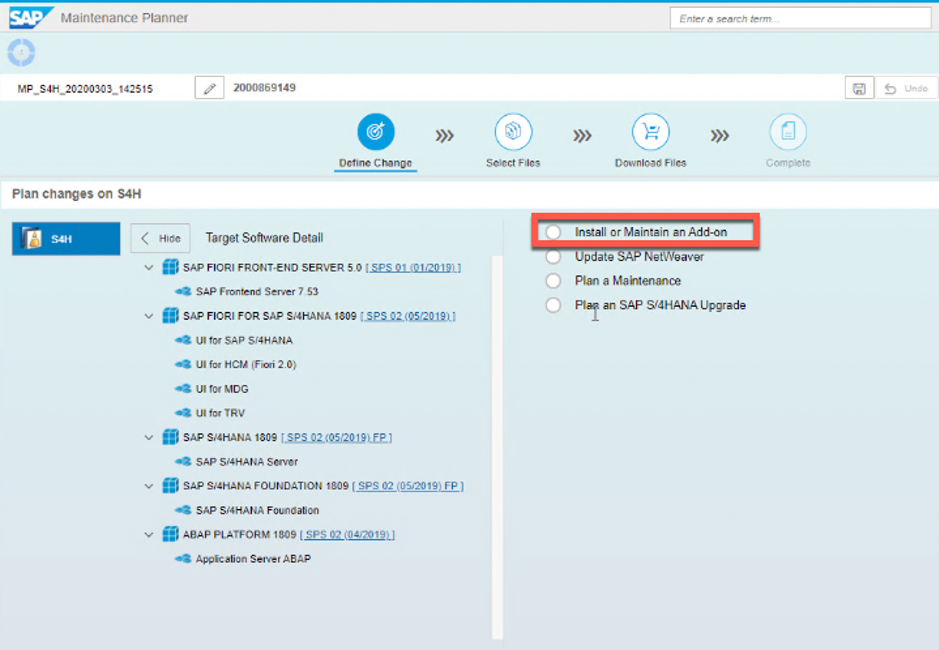 Example of the installed product versions in a SAP S/4HANA 1809 system upgraded to FES 6.0 SP01 :

IMPORTANT: For any deployed SAP Fiori apps that are not part of SAP S/4HANA you must also do due diligence check that these apps are still supported, see SAP Note 2825540 – Release of Fiori Product Versions for SAP Fiori front-end server 6.0

You can check the following note for the release schedule for FES :

We recommend patching your SAPUI5 to the latest patch level. Patching applies any already known and resolved bug fixes of that SAPUI5 version.  Patching SAPUI5 can be done regularly to keep your version up-to-date or to solve a known issue.

IMPORTANT: SAPUI5 releases a more patches than SAP_UI releases support packages, therefore this patching should also be done after upgrade scenarios #1 and #2 described above. Why is this important?  We have seen several customers apply the SAP_UI component changes and end up experiencing issues because their minor patch level was so very low.  It is better to directly upgrade the SAPUI5 directly as well.

NOTE: You can easily find the SAPUI5 version and patchlevel you are currently running via the About icon in the FLP, as described in the Finding the technical name of an app blog. 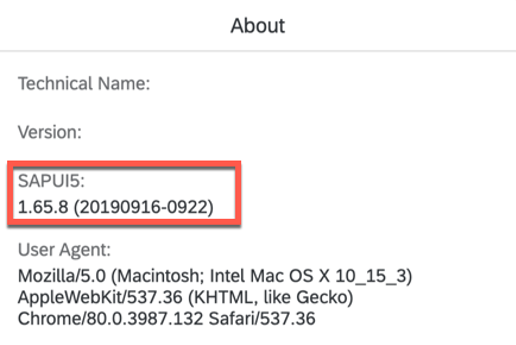 Who’s doing this? This is something every customer should be doing! It’s particularly important to make sure you have patched SAPUI5 prior to User Acceptance Testing to minimize issues.

How to do this patching is described in the following notes:

On an SAP S/4HANA system the following ABAP components are involved:

We share some more details on these components further below.

SAP FIORI FOR SAP S/4HANA : this component contains the actual SAP Fiori apps and there is a strict (1:1) dependency with the SAP S/4HANA release.

Release notes of this software component:

You can check the release schedule for SAP_UI component here:

NOTE: while it is technically also possible to only upgrade the SAP_UI component SAP recommends to always include the other FES components SAPBAS (upgrade scenario #2).  These are supported combinations that also other customers are using.   And you might face unexpected bugs, for which you will need to raise SAP Incidents.

Upgrading to the current latest SAP_UI version 7.54 SP2 will currently bring you the SAPUI5 1.71, a long maintenance release version (currently supported until Q4/2025).

Before making your decision go through all relevant SAP Notes and information regarding the relevant versions of the SAP FIORI for SAP S/4HANA, FES, and SAP_UI for your current and target versions.  While we try to keep also this blog updated, SAP Help and Notes are the official documentation and up-to-date information from SAP.

Usual SAP Notes and links of the latest releases:

Thanks for the information. The option of upgrading to SAP Fiori 3 in lower versions of S/4HANA is really useful.

Hannes Defloo : Thanks for the helpful blog! Will it be possible to install a SAPUI5 version > 1.71 to FES 6.0?

Thank you very much for the great article.

Is it necessary to update the Fiori-Frontend-App-Component (for example UIAPFI70) too? Or, is this impossible because the s4core version is not updated?

Can you please share documents/links/Tutorials/notes having more details regarding the point "FLP ABAP as integration platform: Integrating UI5 based Fiori Apps running on SCP into the ABAP FLP" that you have mentionned.

What happens to user-developed custom Fiori if I upgrade my old S / 4HANA to the new S / 4HANA?

Can I continue to use the custom-developed Fiori as it is?