The important requirement in today’s business scenario is the reporting and that too with how quickly the  management user will execute the report that uses complex calculations and if and buts scenarios. Writing a query at ABAP end and do all calculations based on the if and buts may slow down the performance of report.

For an example – a SQL kind as shown below: (though it looks simple, assume of having some case statements as well)

Hence the approach to database is taken up. Since Hana as a powerful database – pushing all these complex calculations and cases, – as a SQL / Views / Procedures into Hana database and call them as a object from ABAP as a query and print the report.

AMDP – ABAP Managed Database Procedure – A feature in ABAP that allows the developer to handle the database objects directly in ABAP.

We shall see below in detail.

Note : There are number of articles available in internet as blog posts.  The intention of this document is a self documentation that collects all what we learned and put it one place to refer future and may be helpful to others as well.

ABAP Managed Database Procedures (AMDP) is a class-based AS ABAP framework for managing and calling database procedures and database functions in the SAP HANA database. Following picture presents the idea in simple way.

We shall see further how to create this class and how it is consumed in the ABAP programs.

First of all let us have the class structure. The class is directly handling the SQL.  Since we are having the where clauses at SQL – the class is having the way to get input parameters from the ABAP and provide output as Dataset results from SQL.  in the next section we shall see in detail the different ways of input viz. Parameters, Range of Data etc. 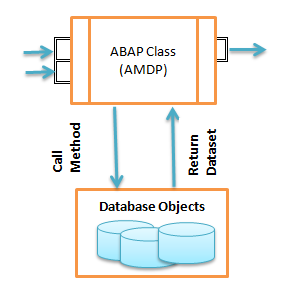 The Class should have following

see below structure that we used for this class

Consume the Class in ABAP report.

Now in ABAP report, you can use the Class as follows.

the output of the sql is stored in gt_output (Import Parameter)

Now we have completed the class creation and usage of the same in ABAP report.   We shall recap the steps again as a bullet points.

Now as we see, in the SQL we have used Begda and Endda as the where clause parameters.  These parameters are passed to SQL through method export parameter. In our next blog – we can see how a select-option can be passed to class that will be used in SQL

Your variable definition is incorrect

Yes, Actually I just gave a hint of definitions (from my big report).  I shall review and update the actual code..