An approach that S/4HANA means for many people is like the ECC with a renewed “super-body“. Then, We can now quote the Bernoulli’s epitaph: “Eadem mutata resurgo” (Although changed, I rise again the same).

The Migration/Conversion to S/4HANA is a very interesting topic to ABAP for HANA Developers and this article is a general presentation of some of the ABAP fundamentals and tools that are available. In this sense, it can be useful for those ABAP Developers who need an introduction to the new resources available within HANA and some basic examples.

The knowledge that I may have acquired to write this blog comes mainly from reading and studying the handbook “HA400” from the SAP Learning Hub and also of my own experience. In this process and without any more preambles I allow myself to present a question and also I could give an answer to it:

In fact, some custom code can go faster, but others go slower. The code that respects the classic principles of good practices will go faster (plus a change of priorities). The code that not consider these good practices eventually goes as slow as before. In this sense, the Bernoulli’s epitaph may gain some relevance because something from the past must be preserved.

In general, “FOR ALL ENTRIES”  sentences are automatically improved within S/4HANA. However, the rules of use remain (table pivot sorted and not empty). For example:

The most important rules that stay valid and represent a change of priorities within classical principles of good practices are:

Another less important rule is keeping the result set small, for example using “WHERE” clause as much as possible. Although less important, it also is important, because an array fetch of unnecessary records can be expensive to the SAP Buffer.

Code Inspector (Transaction SCI) can be used to get the performance issues in the code within the Migration to S/4HANA. You must fill a Name for the Inspection. For example: 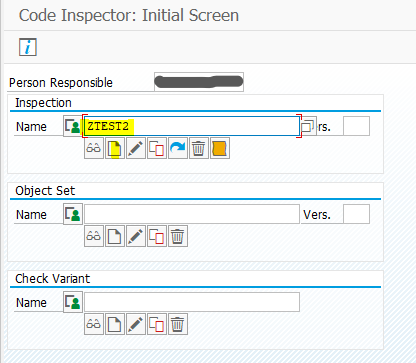 By clicking on the button “Create“:

Marking a Single “Object Selection“, filling up the name of the Program and using the object variant “PERFORMANCE_DB“ you could get the next message:

By clicking on the green check you could get the message:

By clicking on the “Results” button:

You could get the list of Errors, Warnings, and Informations about Performance Issues.

It’s possible to expand each of these items to see the detail of the issue: 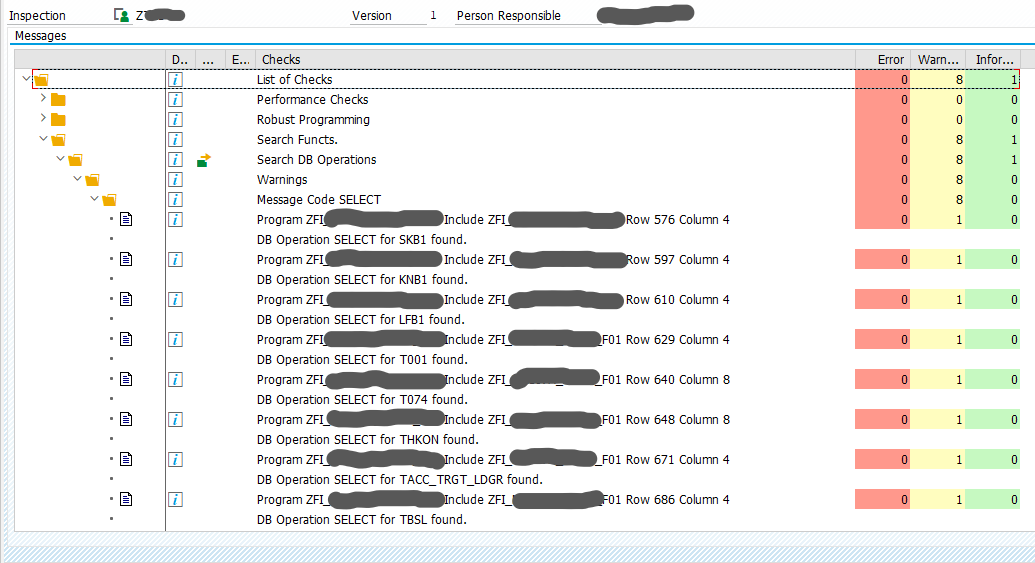 By double click, also go directly to the line of code: 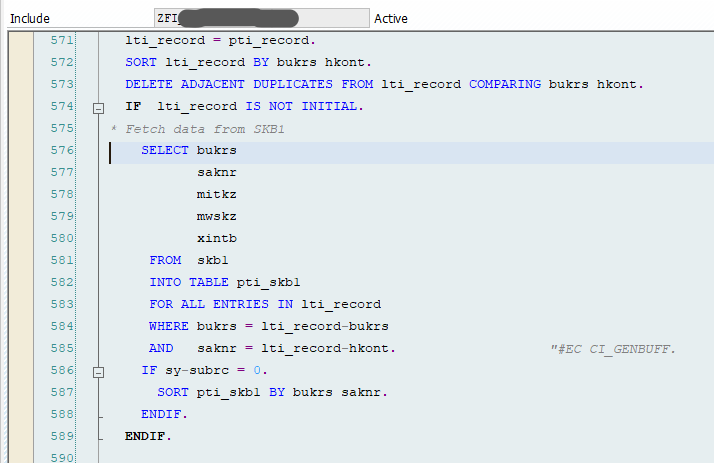 A new ABAP Profiling Perspective in Eclipse is available and this tool is similar to SAT transaction, but enriches with other elements like for example Call Diagrams.

The figure below summarizes  a flow diagram of Custom ABAP Code Migration Scenarios: 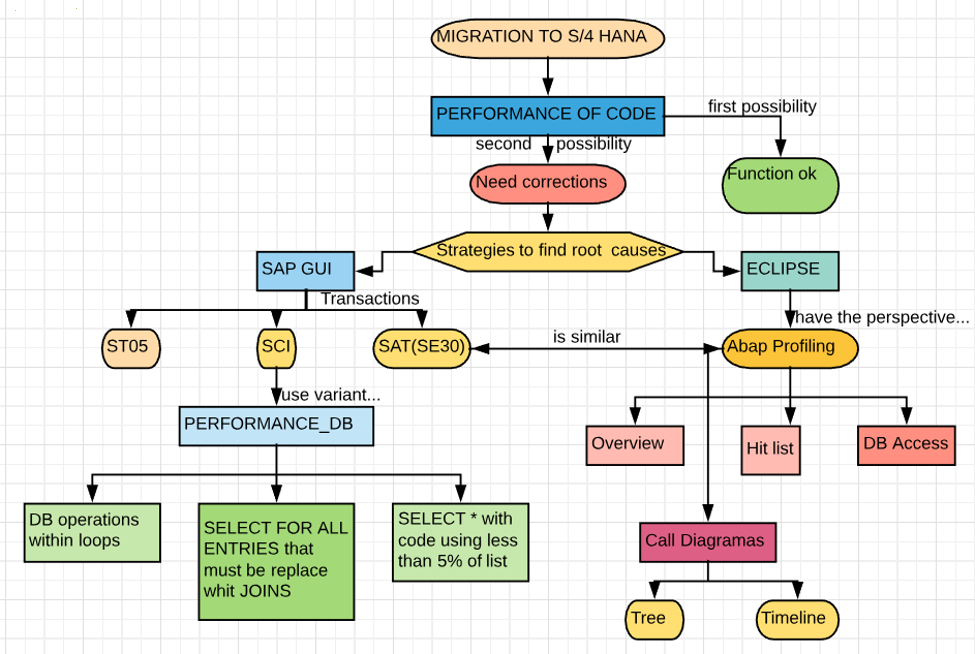 Which other new tools are available with S/4HANA?

To improve performance, reuse data objects and to allow the possibility of modeling, other development’s objects appear in the ABAP’s radar:

These new objects would conform to a new and very important golden rule:

The new tools in Eclipse to build these objects are the ABAP Development Tools (ADT) and the Hana Studio. ADT is a tool that contains two types of experiences. The first is like SAP Classic GUI that is good to work with the Screen Painter and the second named “Look and Feel” is a new tool with its own characteristics as code templates to Object-Oriented Programming, Code Completion, and Quick Fix possibilities. The figure below summarizes the integration provided by Eclipse: 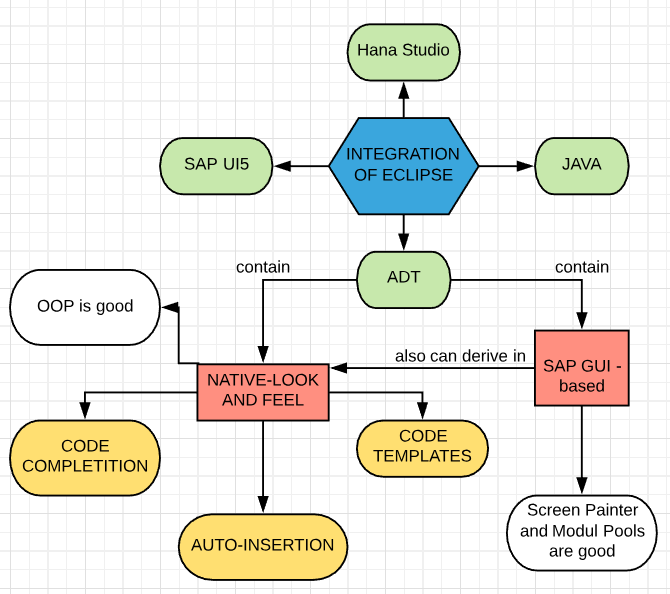 Hana Studio lets to build/edit Calculation Views and Stored Procedures and Eclipse is also an environment that lets to work with other programming languages as for example JAVA and SAP UI5. Right now there are also tools in the SAP Cloud Platform that contain some of the capacities of ADT and Hana Studio.

On the other hand, the ABAP Open SQL is now enriched with new sentences and it offers the possibility of use until 50 join’s tables and 50 subqueries.

The use of the new Hana Database as the primary element implies that Secondary Indexes are not relevant and aggregations are dropped. Also, many tables that previously were Table Pools and Clusters, are transparent now. The following figure summarizes this discussion:

In conclusion, within a Migration of custom ABAP code to S/4HANA, the performance in all cases is not faster immediately. The main classic ABAP rules that remain valid are:

The less important rules are:

Instead of these less important rules, a new principle is established: Code to Data, which means work hard in the Database and transfer the results to ABAP Server.

New tools are available to ABAP Development, for example ABAP  Development Tools (ADT) and HANA Studio. These tools let to build and edit new repository objects and do performance tests with new elements of analysis.

Thus, S/4HANA as the newest SAP’s platform without precedents in performance and innovations, like any other change in any other human’s topic, could susceptible to a great debate to other blogs. Quoting to Heraclitus that said “The Only Thing That Is Constant Is Change” You may think that although S/4HANA is the latest technology, obviously it will not be the last.

By the way, in February 2020, SAP announced that support to S/4HANA will go until 2040. Then, maybe in the “SAP’s Kitchen” a new platform itself could be cooking right now, or at least the ingredients are getting ready. But, it remains only as speculation of the author. The time will judge and every day brings its own concern.

Likewise, I invite you to read the continuation of this article found at the following link:

I hope that these articles help other people to build some knowledge of ABAP Migration to S/4HANA and open the mind to other questions. All comments and suggestions are welcome.

Thanks for sharing your experience! If someone need a starting point for ABAP Development Tools for Eclipse, check this GitHub repository.

Dear Jorge, I really appreciate your article and thank you for sharing it with us. I have read it carefully and I agree with the content and conclusions. I would like to emphasize that ADT techniques are suggested to be used when a business case requires it, but first having analyzed and discarded the basic ABAP techniques. In other words, if a basic ABAP technique solves the requirement, give priority to this type of solution, before implementing a more complex architectural solution

Hi José Albeiro Huertas Martínez, Your welcome and Thank you very much for the time you took to read the article. I greatly appreciate your point of view. Regarding ADT, I found a free way to use ADT for ABAP testing purposes. I allow myself to share the link:

I'm sorry, but I really don't understand your point.

So I learned some interesting perspectives on S/4 ABAP performance and Jacob Bernoulli; bravo!

I seem to recall that SELECT field1, field2, … field99 FROM table... where there are exactly 99 fields in the table, is still faster than SELECT * FROM table.

Maybe someone could test that.

Also, in your FOR ALL ENTRIES example - you should select into a SORTED table, rather than SORT after selection. Just makes things a bit simpler. ?

Hi Matt, Thanks for your post. In fact, "Minimize amount of transferred data." is a rule established by SAP as a good practices in ABAP coding to S/4HANA. In some cases, you could need all fields of table. Then you must to use asterisk. in other cases is better a detail list of fields because you must to use machine resources rationally. Thus, if the table in the DB have 100 fields, it is reasonable to use a detailed list if you are only going to use for example less than 10 fields.

"Also, in your FOR ALL ENTRIES example – you should select into a SORTED table, rather than SORT after selection. Just makes things a bit simpler. ?" -> Yes, I'm totally with you, It is a better way. The piece of code in the article is just an example and there must be many other better ways to do it using other ABAP 7.5 statements. But the rule is valid.

I would like to invite you to write an article so that you can share your knowledge with the whole community.

Great doc, Interesting to read and apply thanks for sharing...