The diagram below shows the pricing objects that exist in SAP CC.
SAP calls them just Objects, but let’s call them Pricing Objects to be precise. 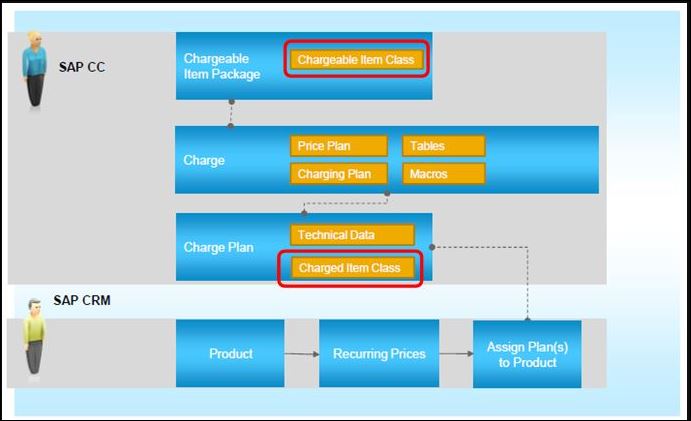 (Note: Chargeable Item Class is not the same as Charged Item Class)

Getting back to our mobile phone example, when your carrier initially sets up the SAP CC system, they need to first create the Chargeable Item Package (CIP). This is to generally represent the service package. We can name the CIP object as [T01]Mobile Telephony.

In this service package, your carrier may include Voice, SMS, MMS (i think this is now obsolete), 4G or LTE broadband plans. In SAP CC this will be represented by Chargeable Item Class (CIC).

Next we come to the pricing object Charge. This is where the whole pricing is formulated.  It contains Charging Plan which determines the account to be charged. It also holds the information such as postpaid and prepaid account type. Charge also contains Price Plan, which is the brain of the pricing calculation. It is the rating component. This is where rates are being keyed in, whether you will be charged a monthly flat rate or according to your usage consumption for example. To simplify the Charge concept, we can group it as Connection Charge, Equipment Rental, Commission, Calls, SMS, Installation etc.

A Charge Plan, is the object that exposes the SAP CC pricing objects to provisioning system such as SAP CRM. Think of it as your carrier mobile phone plans. For example a SmartPlan-A gives you 60 minutes of free local calls, 500 sms and 2GB of internet data at a fix monthly rate of $100. SmartPlanA is represented by the Charge Plan, while the rest of the statement is represented by the Charge object.

Charge Plan contains two objects. First, is the Charged Item Class where we define the output format of the rating and charging process. The result of the rating and charging process is either called a Billable Item or a Consumption Item. This information is feed to the SAP Convergent Invoicing (SAP CI) for the billing process. The second object in the Charge Plan is the Technical Data.  The set of Technical Data is made of a Service Identifier and a User Technical Identifier. For now, let’s just agree that the Technical Data allows SAP CC to retrieve the correct Provider Contract. The why and how will be explain later in the following chapter.

Note: SAP Customer Relationship Management (CRM) handles the sales order or service contract creation. It is not compulsory to use it with SAP CC. You can directly feed the information to SAP CC but for our example, let’s use SAP CRM as the provisioning system.

In a nutshell you have understood the Pricing Concept in SAP CC.

Nice explanation ..looking forward for your next topic