Before you start with PART 2, I am sharing the link for part 1 for reference:

In general SE11 views and ABAP CDS Views both will create a database views at the backend. When we try to access these views as a table in the ABAP code, this code will be executed at the database level.

Hence, SE11 views and ABAP CDS Views both will implement code push-down, In-spite of this, CDS views has many advantages in CDS views.

Below are the comparison between SE11 views and ABAP CDS Views:

We have seen basic ABAP CDS View creation in PART 1. Now we will see how to consume particular columns from a table, how to create the calculated column, how to use the parameters and how to use the CASE Expression in side the ABAP CDS View’s definition.

Below is the logic for CDS views: 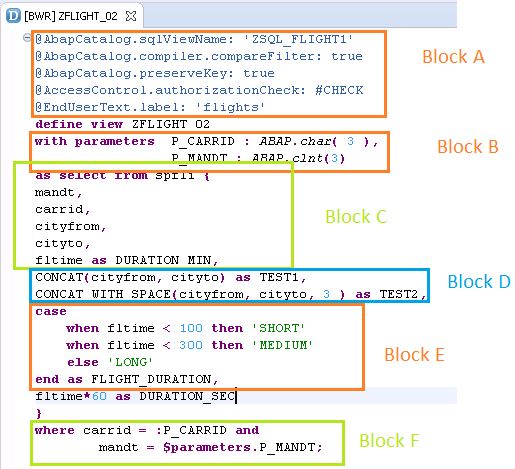 I have divided above CDS logic into 6 block (A to F). Below is the explanation of these blocks:

These are the annotations automatically generated when you select the Defile View template during CDS views definition. As shown in below snap shot: Key word to define parameter is With Parameters and parameter name. Along with it we have to define the parameter’s data type with the prefix ABAP.

Way to Select the individual columns from SPFLI table.

We can use Functions inside the CDS View and we can provide the alias as well.

We can use the case expression to provide the conditional logic while defining a column.

We can use the parameters which we have created in the B Block in a where clause to get the user input during execution of the CDS View.

There are 2 ways to use the parameter in the Where Clause:

There are 2 ways to execute the CDS View:

You can simply press F8 to click on the highlighted button in the below snapshot:

and provide the value for the for the parameters. 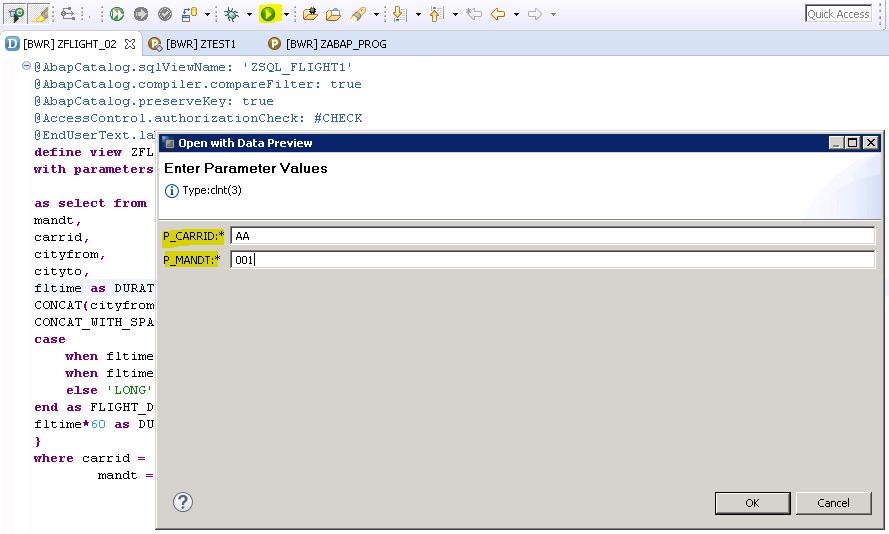 Create a ABAP program by using below Open ABAP Code:

With this example, we have completed the Second part of ABAP CDS VIEWS simplified.

A simple Report to View a CDS with SALV IDA.

Many thanks for providing this pseudo code.

Not only ALV WITH IDA reporting but we can consume CDS views in basic ABAP as well.

Thank you very much Arpan for providing this useful and nicely formatted guide for those of use who are eager to learn about CDS views.

great blog... thanks for all the efforts that you put into this

Perfect Arpan thank you. This is better than to watch videos hours time.

But I have a question. Can we now if we want consume this cds view in our html/javascript file? Or is it only consumeable with ui5 apps?